Usually I try to shoehorn the events of the day into some sort of overarching framework.  Yesterday, for example, it was the weather.  Today has no such organized theme; instead, I'm going to be more of the flâneur, in the Walter Benjamin sense, strolling amiably from one experience to the next.

I was determined to begin to make up for sleep last night so I went to bed around 8 pm, when I couldn't keep my eyes open any longer.  I knew my problem would not be falling asleep, but staying asleep.  When I woke up at 10 pm, I took an Ambien.  I slept until after 6 am (for a total of 10 hours), though I awoke several times and had particularly odd dreams.

Breakfast is at 8, but I went out early to walk around the neighborhood.  My old laundromat on the corner has closed, but apparently there's another one about three blocks away.  I stopped by the grocers and picked up some rolls and an apple for later.  I would have picked up some yogurt, but not having a spoon, I had no way to eat it.

When I got back, a little after 8, the breakfast was open.  The pension has a nice spread.  When I stayed here three years ago, it had fallen a bit on hard times, but today it seemed like a healthy variety (though still not as sumptuous as an Israeli breakfast).  Still, there was bread, butter, jam, salad caprese, cereal, fruit, yogurt, eggs, bacon, cheese and salami, juice, tea, and coffee.

Afterwards, I got my stuff together and headed out to the Jacob und Wilhelm Grimm Zentrum of the Humboldt University, Berlin (and yes, it is named after those brothers Grimm).  All beginnings are difficult and today was no exception.  I've been feeling that my German was very rusty, no more so than today.  I couldn't even get the simplest sentence out of my mouth without making a mess of it.

I started at what looked like the reception, and the woman proceeded to give me directions that I didn't understand at all. It wasn't as if she was speaking fast; in fact, she spoke quite slowly.  The problem was I didn't understand enough of what she said.  Usually, when I speak to people in Hebrew or German I understand only a fraction of what they tell me.  I then extrapolate from what I understood to fill in the rest.  In Hebrew, I get about 75% or so.  Today, in Germany, I felt like I was only understanding about 25%.  All I could make out was that I needed to get a Mensa card (it doesn't refer to the genius society, but rather to a cafeteria), and then I also needed to go to someplace on my right.

The place on my right turned out to be a locker room, but there were no keys to the lockers.  Rather each one had a push button.  If the button was depressed, it means the locker was being used.  But there was no key or lock to unlock the closed locker.  After much confusion, someone finally explained that in order to lock it, I needed a Mensa card.  I bought one and she then explained that if I press the card against the lock, it locks it and then if I do it a second time, it unlocks it.  With my bag and jacket locked away, I could now enter the library and get a card.

One big hang up was that since I don't have a German home address, I was not going to be permitted to check books out.  That's alright, I explained, I don't need to check them out as long as I can read them in the reading room.  In fact, what I really want to do is copy the material so I can read it later.  I filled out the form and received a card and password.  I promptly set out to order my book, only to find that it's checked out until tomorrow.  I've requested it and they will email me when it comes in.

It turns out there are several other copies of it over at the Staatsbibliothek zu Berlin.  There are three of these state libraries in Berlin, and the one on Potsdamer Straße had two second editions, so I went there first.  As with the Jacob and Wilhelm Grimm Zentrum, I needed to get a library card.  Here, at least, I understood the directions better.

As with the earlier library, without a German address, I couldn't check books out, but I could read them in the reading rooms.  I purchased a 4 week permit and went about ordering my books.  Unfortunately, both second editions are checked out until the end of the month.  They did have another copy of the first edition, but that one is located at the Staatsbibliothek zu Berlin's Unter den Linden branch.  Off I went walking again.

I didn't know when end of Unter den Linden it was located at, so I decided to walk to the Brandenburg Gate, which is only 8 or so blocks away.  Unfortunately, the library is at the other end, so I ended up walking quite a distance.  I went inside, found a terminal, and ordered the book.  According to the computer, I could pick the book up at 17:00.  As it was only a little after 14:00, I had some time to kill.  I walked past Museuminsel to Oranienburger Straße to check out the hostel where my students and I will be staying in two weeks.  It looked clean and new, and is only three doors from the S-bahn station. 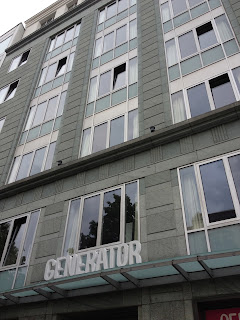 It's also about a block away from one of the most beautiful synagogue (facades) in Europe.  Unfortunately, the rest of the building was destroyed by the East German government in the 1950s. 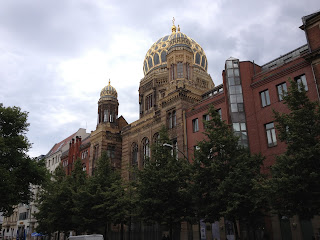 Somewhere along the way back to the pension I ran across something called "EuroShop," which is basically a 99 cent store but in Euros.  I picked up a set of plastic cutlery.  Back at the hostel I changed.  The weather has been extremely variable today, going from cold and overcast to warm and sunny.  The libraries have all been warmly heated, so I chucked my long sleeve shirt layer, and headed back to Unter den Linden.  I decided to splurge and instead of getting cafe au lait at the little place by the pension, to go Cafe Einstein.

I ordered my cafe au lait, and as it the stammhaus location near the Tiergarten, it came with two mugs, one of coffee, the other of  steamed milk.  I also ordered an Apfelstrudel with vanilla sauce, though the waiter forgot it to bring it until I was almost about to start my third and final cup.  It was very good, though at 12 euros, it was about three times as expensive as what I would have paid in the neighborhood. 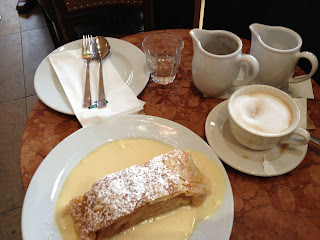 By the time, I finished it was almost 17:00.  I walked around the corner to the Staatsbibliothek, checked my stuff, walked up to the 1st floor (over ground), asked for my book, and was told that it wouldn't be ready until tomorrow at 11.  So much for my first day of research:  lots of work but almost nothing accomplished.

On my way back to the S-bahn station, I passed an enormous bookstore, so I wandered in.  In the large English language annex, I picked up a copy of Michael Chabon's The Adventures of Kavalier and Clay, which I had been meaning to read for several years now.  I also noticed that my Doktor Onkel (he was on my dissertation committee, but wasn't the chair) Saul Friedländer has a new book out on Franz Kafka.  I opened it up and right at the front he had reproduced a letter to Kafka.  It was one of those things that when you find it in the archive you just jump up and down with excitement (well, you would if they permitted it, so you ended up just smiling to yourself in a particularly knowing way).  In this letter, a man had written Kafka complaining that Kafka had made him miserable.  He had given Metamorphosis to his sister, who didn't understand it, who gave it to his (and her) mother, who didn't understand it, who had given it to their cousin, who didn't understand it.  They all demanded to know what it meant, but when he read it, he didn't understand it either.  Please, Mr. Kafka, he wrote, what does it mean?  I laughed out loud.

I stopped off a drug store to pick up some stuff I needed.  I forgot to pack talcum powder and I didn't like the puny amount of soap provided by the pension for the shower, so got a small bar and travel case.  I also picked up a replacement umbrella.

For dinner, I headed off to a place in the neighborhood called Zum Schusterjungen, which is supposedly a little bit of DDR (that's East Germany to you westerners) tucked away in Prenzlauer Berg.  The weather was much nicer today, and yesterday's dark, under-the-El greasy spoon looks almost elegant (well the El does, not the currywurst place). 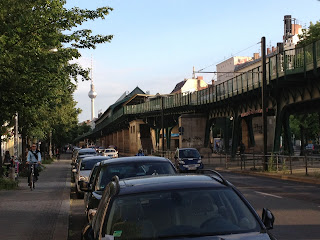 Prenzlauer Berg has been increasingly gentrified, but there are a few bits of the older feel still left: 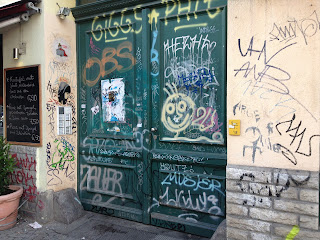 The place seemed nice and homey on the inside, with a simple, traditional menu. 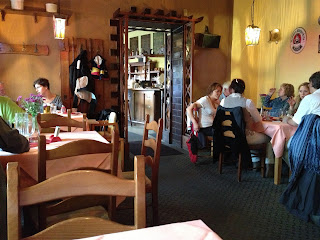 I started off with the Spargelkremesuppe (Cream of Asparagus Soup) as it is Spargelsaison.  It was delicious, with large slices of white aspargus. 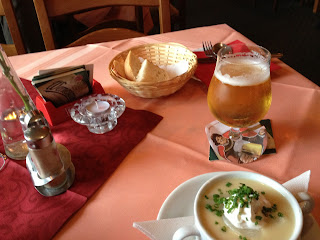 At the table behind me, one gentleman in the party was enjoying the traditional nature of the menu.  "Sauerbraten mit Rotkohl!" he loudly and theatrically exclaimed, in the kind of excitement that Violet Beauregard in Charlie and the Chocolate Factory used when she said "Blueberry pie and ice cream!"  I had the schnitzel, which was hot, large, and tasty.  I was too full for any dessert, and so I left to walk back to the pension.

Tomorrow, I'm going to pick up some rolls and salami to make sandwiches for the lunch.  I'm heading to the Westhafen branch of the Staatsbibliothek in the morning, which is where they have their newspaper collection.  I'll check on the book I ordered after lunch.
Posted by J.B. at 1:30 PM