The Amazing Thing that is Live Entertainment

Most every time I go to a performance at some point I end up thinking about what an amazing thing live entertainment is.  We pay a little money (in my case 37 Euros) and for that I can see and hear about an orchestra and over a dozen performers entertain me for 2 and a half hours.  The cost of my ticket probably didn't ever cover the salary of one of the cloakroom attendants.

Before I went to see La Traviata, I read a synopsis on line.  Since they were unlikely to have supratitles in English, I thought it would help me follow the action.  When I went to the ticket booth, the guy told me there were two categories of seats left:  37 Euros and 64 Euros.  I went with the cheaper price.  He warned me that the seats would be on the left.

In fact, the seats were about as far left as you could get.  I was on the first balcony (actually, the only balcony, on the far left to the front.  What that meant was, my view of the stage was partially obstructed by the stage lights.  When action took place stage left I could see it, but anything stage right was basically invisible to me. 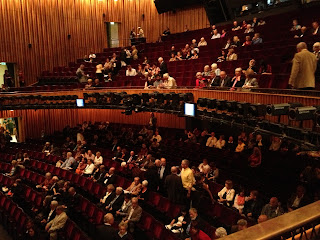 In the end, it wasn't a problem because I didn't care all that much for the staging.  At first, during the overture, all you see is a sheer, dimly lit dress, slowly and awkwardly walking towards the front of the stage, in which we will eventually see the heroine, Violetta, who has only partially recovered from tuberculosis. As the lights come up, the back of the stage is lit up with a video of cars driving on wet roads at night time, and a recurring shot of what looks like the tunnel where Princess Diana was killed.  I'm not sure if the message we're supposed to get is that she's living in the fast lane, unable to get off, or if she's playing on the freeway, or if she is a damaged innocent like Di.  I feared the images might give me motion sickness, so I just read the supra titles.

Which surprisingly, I understood quite well.  I might only understand about 25% of the German I hear from the archivist, but I get about 75% of the German in the opera lyrics.  I did have to laugh when at one point in Act 1, her Italian lyrics were translated into German and "in Strudeln der Lust untergehen."  It sounds as if she plans to lose herself in strudels of lust, instead of whirls of pleasure, which is what the German actually means (a Strudel is a whirlpool after all).

I found myself nodding off during Act 1, but perked up in Act 2.  At the intermission, I went to the lobby and had a cheesecake with apricots and a mineral water.  I only had time for a quick sandwich at Zoo Station before curtain, so this was my splurge. 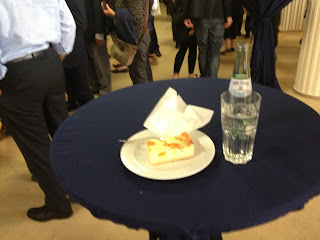 If I had planned ahead, I could have had a whole plate of hors d'ouvres and champagne waiting for me, like these people, but I didn't want that. 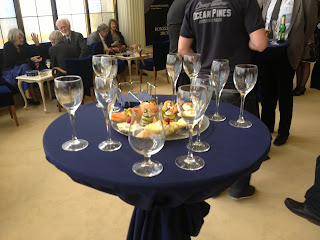 For Act 3, the floor of the stage was now lit up like freeway lanes, driving home whatever point the stage designer was trying to make.  I enjoyed the music, but not so much the staging.  Since I was so close to the stage, I could see every tiny facial gesture the actress playing Violetta made.  I should add that in addition to the freeway set, all the cast, except for Violetta was dressed almost entirely in black.  The main male leads looked like undertakers.  The main female leads looked like goths.  Everyone else looked like zombies.  Really.  Violetta, by contrast was clad in a white, poufy meringue-like gown, with white sleeves, white hair, and pale white skin, as the tuberculosis had consumed all the blood in her body.

So, what about the rest of my day?  I hadn't heard back from the Bruno Balz Archive so I went in person.  No one was there.  I can only visit by appointment, so I'll have to wait for them to get back to me.  With the Staatsbibliothek closed until early afternoon for some event, I took the opportunity to visit the Pergamon.  They've started a 15-year renovation project on it, so the entrance has now been moved to the south and they've closed the Hellenistic architecture wing (and the coin collection) until 2014.  The rest of it is perfectly accessible.  The big special exhibit is on Uruk.

I started with the Pergamon Altar, after all it, is the first thing you see when you enter.  This little guy is the god Poseidon, and he originally was on the roof. 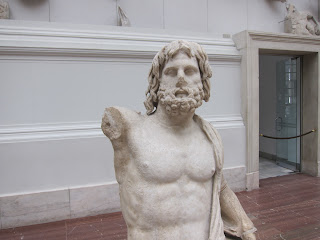 After that I moved on to the market gate of Miletus, and then the Ishtar Gate of Babylon with its bulls  and processional street: 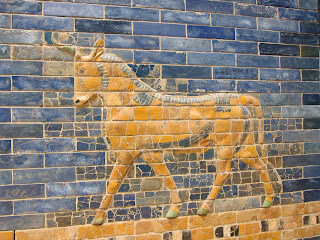 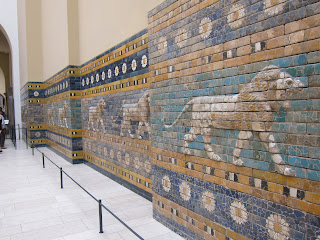 I left the museum after about two hours (about my limit), and had my lunch in the park.  The road across Museuminsel, leading to Unter den Linden has a big exhibit on how the Nazis destroyed diversity in Berlin, but I couldn't help notice this ad, which I've seen all over Berlin, in which they are trying to raise money to create a memorial center for Magnus Hirshfeld and his role in founding the world's gay rights movement. 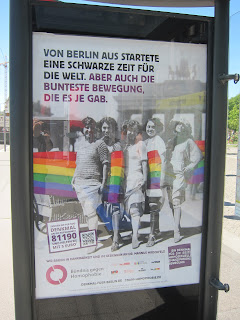 The text reads:  "Out of Berlin came a black time for the world.  But also there was the most colorful movement."

And just behind this ad is the exhibition, and if you look on the third pillar from the front, on the bottom, you can see Magnus Hirschfeld. 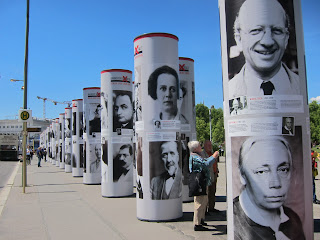 I went to the archives in Westhafen and successfully copied all the news articles in digital copies on the USB stick I bought.  I need to figure out which additional newspapers I want to review.  Luckily, all the articles should be concentrated on just five days, so I won't have to go through that many.  I snapped a quick shot inside, in case you were wondering what an archive looks like. 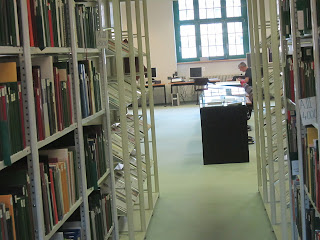 I find the old docks and warehouses nearby fascinating. 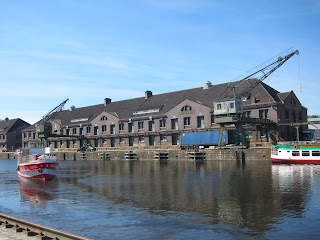 By the time I finished it was nearly 5 pm, which didn't give me a lot of time to get back to the pension and change.  Here's what an S-bahn car looks like. 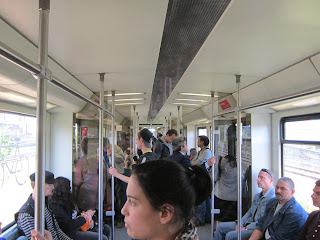 The weather was clear, sunny, and warm today.  If it keeps up, I might try wearing shorts tomorrow.