Today was a pretty crappy day, one of the worst of the trip.

It started out ok; I managed to sleep over 7 hours.  I packed before a leisurely breakfast and went down to check out just before 9 pm.  That's when my troubles started.  I thought they started when the receptionist didn't show up for 15 minutes, but in fact, they started when I left my room.  While I thought I did a comprehensive sweep of all drawers and cabinets, in fact, I had forgotten to check the bedside table where I had left my camera.

I haven't really used my camera that much on this trip, relying instead on my iPhone.  As a result, I pack it away rather than always have it hanging off my belt. As a result I didn't realize I had forgotten to pack it.

The rain held off until just as I reached the bus station.  I had no trouble getting a ticket or putting my stuff on the bus and off we were to Krakow.  Around 1.5 hours into the bus trip, I realized I had forgotten to pack my camera.  I had checked the armoire, the chest of drawers, and the table tops, but i forgot the night stand had a small drawer.  I had taken almost everything out the night before, but not the camera.

As soon as I checked into the hostel, I emailed the hotel.  Luckily, they had already emailed me to tell me they had found it.  I wrote them telling I would come back tomorrow to pick it up.

In the meantime, though, I was discovering what a crappy place I picked to stay these next two nights.  Called "Good Bye Lenin - Revolution," I hadn't realized this wasn't the same as the well-reviewed "Good Bye Lenin" hostel.  It's part of the same family, but they seem to have taken the war on bourgeois values too literally.

See if you can find all the things missing in my room (the sheets and pillow are on the bed): 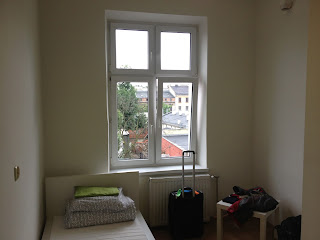 I'll post the answers in a subsequent entry.  You have until then to identify at least three of the things missing from the room that one would usually expect to find (though, luckily, the front desk just gave me one of them).

Because the internet is so crappy in the hostel (it's the fourth thing missing, but you can't see WiFi), I won't be posting any more pictures for the time being.

I went to the milk bar across the street and grabbed a plate of russian pierogies (potatoe, cheese, and onion filling) and then made my way to the city in the hope of finding an English-langauge newspaper.  No such luck.  Stopped for some cake and coffee in order to get out of the rain, again. 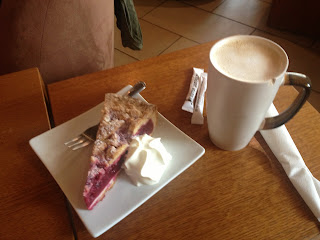 This is the third day it's rained.  I just tried to check the weather for tomorrow, but the page won't load because the internet is so CRAPPY here.

With most museums already closed for the day, I figured my best option on such a grey and dreary day would be to head to Nowa Huta, the Communist-era development that became one of Poland's largest steelworks.  Block after generic block of Socialist realist architecture.  It reminded me, in a way, of the development towns I've seen in Israel.  Perhaps there's an institutional architectural school that churns out this kind of soulless construction styles.

The idea behind Plac Nowy (see below) was to counter the aristocratic and bourgeois nature of old Krakow. 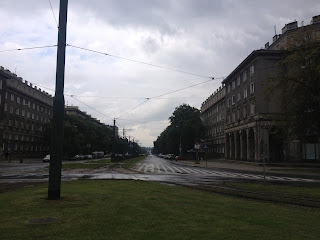 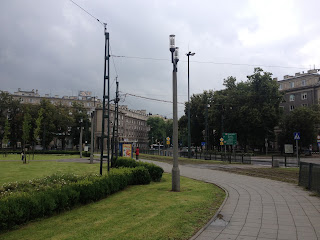 People were house in large housing complexes, all with generic numbering.  When you enter one of the complexes off the main avenue, this is what you see. 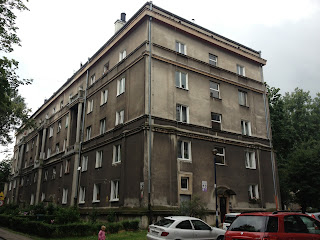 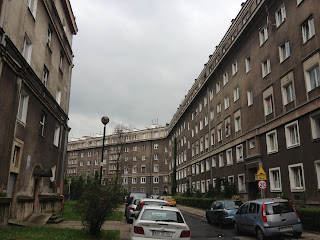 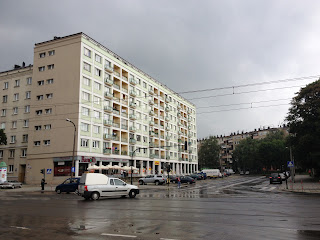 People of course, still live here, but it sometimes feels like a throw back to the communist days. 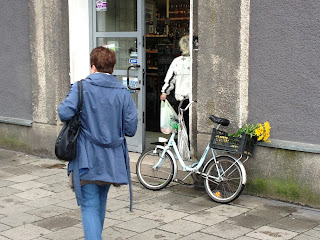 Eventually, i reached the steelworks that give this neighborhood their name. 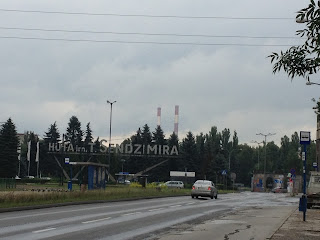 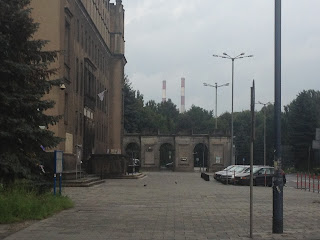 The trams that run through here are the really old-fashioned kind, too. 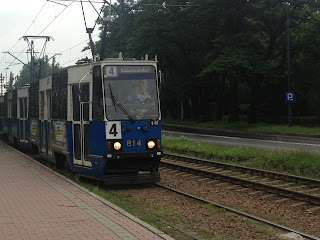 Anyway, I'm just to frustrated by the internet to write any more.  Perhaps I can find a cafe tomorrow after I get back.