Despite all the hiking yesterday and the cool temperatures, two things conspired to rob me of sleep: 1) stress over my missing credit card, and 2) sheer Polish curtains that do nothing to inhibit the entry of light.  So there I was at 5:20 checking my email to see if there were any developments.  There weren't.

After breakfast I headed to Kużnice by city bus to take the cable car to the top of Kasprowy Wierch.  Running for 75 years, this cable car is in fact two cable cars (you change cars at the half way point) running several miles and ascending to the top of one of the peaks in the Tatras.  The buses there start running at 7 am, so I thought my 7:30 start was pretty good timing.  It wasn't.

Several scouting groups had already arrived and the line stretched down the stairs. 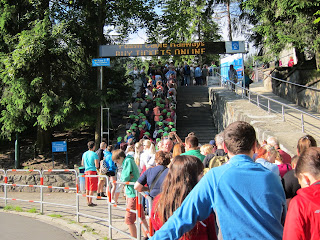 After an hour of waiting, I had reached the top of the stairs.  I might have been able to reach the ticket counter before the second hour ran out, but those people who bought their tickets online had preference, and so they pushed us all back twenty minutes.  Eventually, though, I was able to board the cable car. 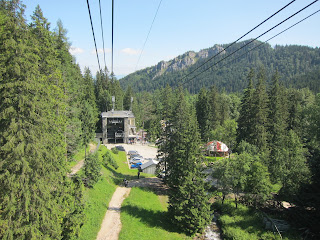 The peak, at 6519 feet, is above the timberline.  In the winter, this is a popular ski destination and has been for a very long time.  My great aunt came to this area in the 1920s to ski. 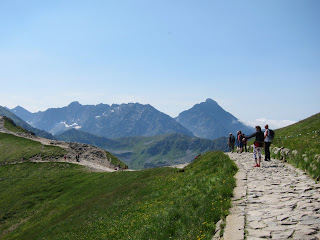 The path running along the ridge marks the border between Poland and Slovakia.  There's no border guards so it's possible to weave back and forth or even stand with one foot in each country.

Here's a shot of me, standing partly in Slovakia, with Poland behind me.  Far in the distance, just before the hills on the horizon, are the towns my grandmother's family is from. 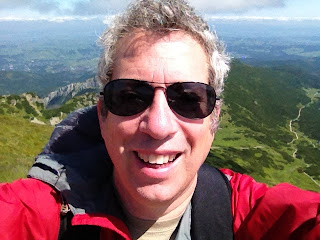 I think the mountains are prettier, though. 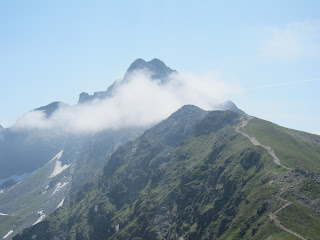 The weather was particularly good today, much better than yesterday.  It was sunnier, but not too hot or humid.  There were a few clouds around the peaks, but nothing more. 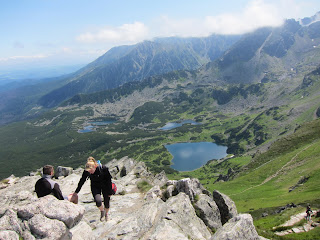 These highland lakes are fed by melting snow and run off.  Morskie Oko, which I visited later in the afternoon is on the other side of the ridge of mountains on the horizon.

With no trees, the vegetation is pretty much alpine meadows. 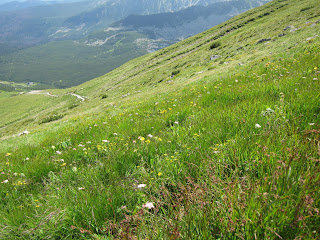 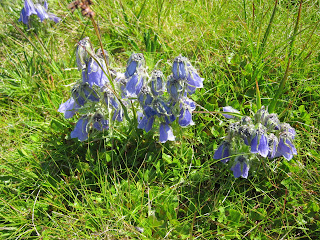 I took one panorama video from the top of Kasprowy Wierch, which I will upload here:


Since I bought a return-trip ticket, my stay at the top wsa timed.  I did have enough time to buy an early lunch (schnitzel) and then around 12:00 I went back down.

In order to get to Morskie Oko, I had to head back to the bus terminal in the center and missed the bus by 30 seconds.  That meant a 20 minute wait.  I was so tired, I found myself half dozing while I waited.  Even with the bus full and moving I kept nodding off.

Finally, we reached the head of the two-hour hiking trail, but I took the horse cart.  I've always gone up this trail by horse cart, particularly when I arrive in the afternoon.  At 1:45, it would have been 4 before I ever reached the lake.  By taking the horse cart and then walking the last 20 minutes, I arrived a little after 3 pm.

It's a beautiful ride to the lake.  The trail is surrounded by pine trees and a small stream runs beside it.  Further up, the tall, sheer mountain peaks come into view.  It's really beautiful. 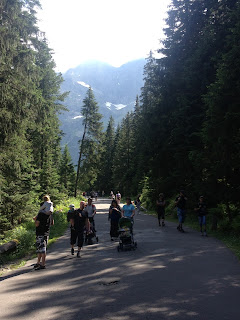 At the top is the most popular of the alpine chalets built in the Polish national park.  For some reason, I call them ornaks, but I have no idea if that's their real name. 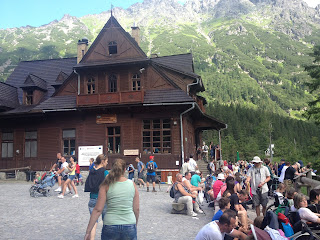 I had my usual szarlotka and cappucino, and then went outside to enjoy the gorgeous lake and mountain scenery. 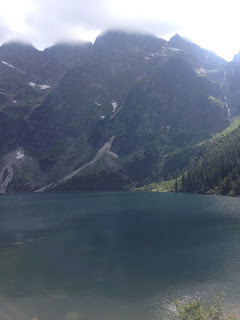 I took another "selfie" at the lake to show how well I've handling these two months abroad: 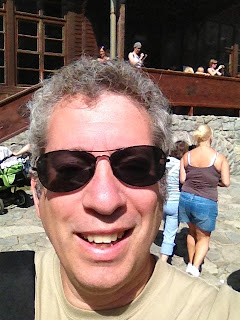 I reached the horse cart lot around 5 pm, and there was already a long line.  I didn't want to walk, since that meant I wouldn't reach the bottom 'til 7 or so. Luckily, a whole bunch of empty carts came so there wasn't any fighting.

I took a short video of the ride down so you can get a sense of how they feel and sound.


The carts move much faster on the way down.  Going up took 1 hour and 15 minutes, but we made it to the bottom in less than 30 minutes.

When I got back to my hotel, I found that 1) the restaurant I lost the card in had found it and cut up per my request; and 2) my use records for the card show no charges after my last one.  Still no response from my frantic email last night to the credit union, but I'm somewhat more relaxed now.

I decided to go back to the Chata Zbójnicka restaurant.  I ate here many years ago and enjoyed the film, a somewhat the shtik.  The premise of the restaurant is that you have stumbled upon the hiding place of a dangerous gorale bandit/smuggler.  The door is locked and when you come, it's opened by an ax-wielding woman who brandishes it at you, when she isn't through metal pans to the ground to ward off the evil eye.

This time, the door was open.  The restaurant was virtually empty; other than me, there were two other guests who soon finished.  The woman is the same (you don't easily forget an ax-wielding woman), but she only half-heartedly brandished it.  I wonder if they've fallen on hard times, or it was just a very quiet Monday night.

I have to say, though, the place would fit in real well in Gatlinburg or Pigeon Forge. 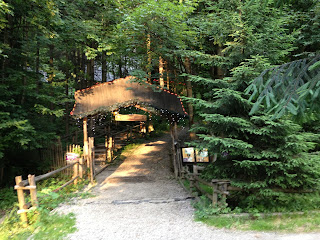 I ordered a large beer with cherry juice mixed in, and the the żurek soup (sour rye with kielbasa and poached egg).  Both were excellent. 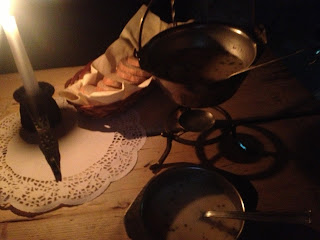 As you can see, the only light is candle light, so my photo of my main course, goose with roasted apples and potatoes, with cranberries, is almost impossible to read.

I really liked the goose I had here the first time, but this time not so much.  It was still very flavorful, but I found the meat kind of tough.  Not dry, but tough.  I got to wondering how they can serve me a piece of goose when the restaurant is basically empty.

I'm going to turn in early tonight.  I leave in the morning for Nowy Sącz (pronounced "No-vy Sahnch") and I need to catch up on my sleep.
Posted by J.B. at 1:00 PM