In some ways our last day started the night we got back to Krakow.  The storm finally passed and the city seemed cooler and dryer.  I ended up going out for dinner with most of the students, trying to find something inexpensive but tasty near the Rynek.

The restaurant we picked was kind of shabby chic. 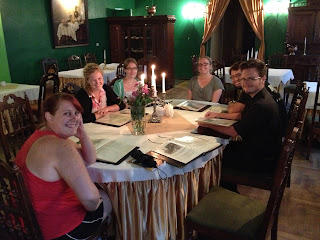 The boys got the pork filet which turned out to be a mistake as it was very dry (or as one said "it sucks the moisture out of your mouth."  I think mine was ok.  The desserts were better (I had the Szarlotka with ice cream, though the vanilla ice cream tasted "off"). 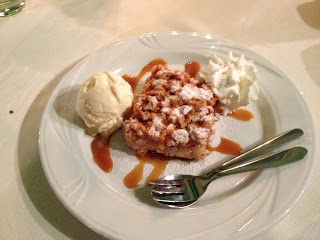 Around 9:45 pm, I called for the bill.  Just then we heard a crash of thunder and heard screams coming from the Rynek.  Massive amounts of hail were failing.  Our waitress yelled "my tables!" and started running.  They had three tiny tables up front on the street, but most places on the Rynek had massive set ups on the square.  Everyone was running for cover, particularly after the hail turned to a downpour of rain.  Meanwhile large bolts of lightening arced across the sky and the building shook with thunder.

We walked downstairs to view the scene, though the waitress advised us to wait. 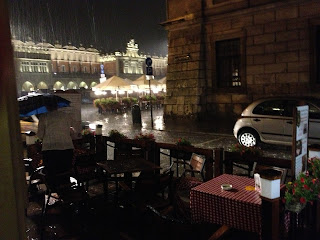 I asked her how long she thought the rain would last and she said "for ever" and then went back to moaning about what an awful night this was.

Unfortunately, I was the only person who had brought an umbrella.  I advised the students to wait until the worst of the storm had passed but four made a dash across the Rynek, trying to get to the bus stop two blocks south of it.  One of the remaining students has a deep fear of lightening, so I stayed with them until the worst of it seemed past.  Then, clutching my umbrella, I made my way staying close to the buildings for shelter.  The two remaining students chose not to cluster beneath me but walk behind, cringing with every lightening bolt.  We eventually made it to the Main Post Office stop, where there was a very crowded bus/tram shelter.  All students returned to the hotel safely and went to bed.

In the morning, I noticed that while I still had Wifi, there was no internet service.  I asked at the front desk and they explained that the storm had knocked out their service provider.  I told the students we would have a late start, so they didn't need to be ready to go until 10 am.  The plan was to go to Wawel Castle and see Leonardo's Lady With an Ermine and then walk around Kazimierz.  One complicating factor: part of the frame of my glasses broke off for no apparent reason.  I picked it up and found one piece on the floor.  I thought maybe a screw fell out, but no, it had broken from the frame.  For the rest of the day, the students found it highly amusing as I was wearing my partial "pince-nez."

We walked the three blocks to Wawel Castle where I saw a line for tickets.  I got in but soon noticed it moved very slowly.  I told the students to go wander around the castle courtyards as it was going to be about an hour.  In fact, it took 55 minutes to get their tickets. 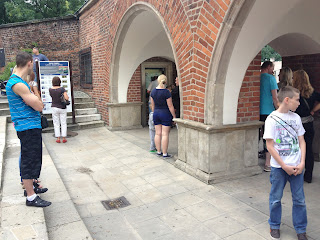 [only 35 minutes from this spot]


Eventually we got in and got to see what I think is one of Da Vinci's best paintings: 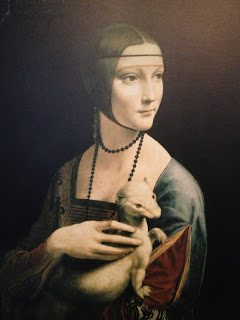 This is normally housed in the Czatoryski Museum, but that's been closed for renovations for several years now.  It was originally kept in a room on display with a Rembrandt and a Reubens, but the Reubens was never recovered after World War II.  It was amazing to visit that museum and be the only person in the room with the painting.  At Wawel Castle it was much more crowded, but they limited it to 20 people in the room at a time.  A much better viewing experience than say, the Mona Lisa at the Louvre, where there are thousands all taking flash photos of the painting, which to preserve it, is kept behind thick green plexiglass.

They also had a nice display on the background behind the picture and who they believe the woman is.

Afterwards, I told the students the story of how the dragon Smok, who lived under Wawel Hill was defeated by a peasant named Krak.  The dragon was hoarding gold and consuming virgins (the way western dragons do) and the king promised his daughter's hand in marriage to any man who could slay the dragon.  After munching on lots of knights, a peasant named Krak tried his hand.  He took a sheep and filled it with sulfur and left it for the dragon.  When it ate the sheep, the sulfur ignited in his stomach, so it flew to the river to drink.  It drank so much that its belly ruptured and died.  Krak then married the princess and became the king and Krakow is named after him. 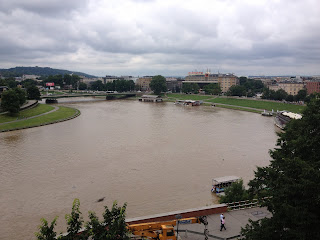 Here's the view of the Wisła River from Wawel, above Smok's lair.  and here is Wawel Cathedral, where for centuries, the kings of Poland were crowned. 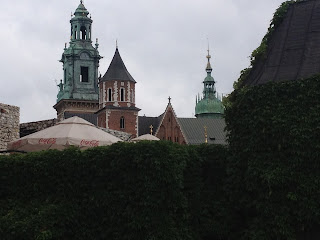 We went to Kazimierz for lunch, though along the way, might students noticed a recipe for Molotov cocktails posted by a local anarchist group. 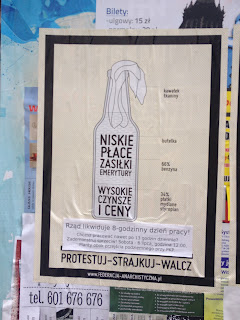 Kazimierz is the former Jewish quarter and has lots of synagogues and cafes.  There's a concerted effort to try to preserve a "Jewish feel" to the area, though sometimes it comes across more as hip than Jewish. 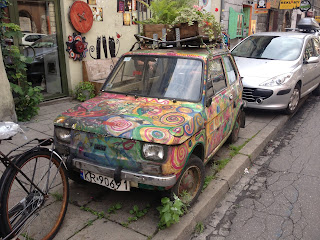 Because it was Saturday, most of the synagogues were closed, but we were able to get into the High Synagogue, where there was an art exhibit.  As it happens, the photographer dropped by and talked about what she was trying to do.  She set out to photograph haredi children and the first part of the exhibit is about rejection. 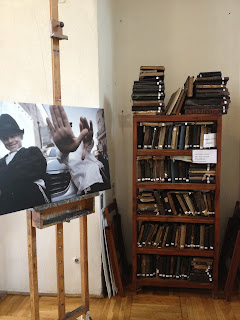 While she called the second half "the gift," where she was able to negotiate her way to more openess. 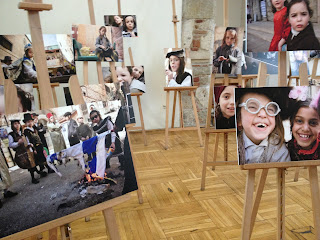 Most of the original art on the synagogue walls was destroyed by the Nazis, but there are still a few surviving fragments. 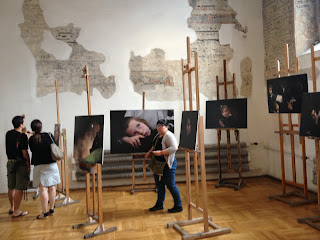 From there we made our way past the sound stage for the public concert of Jewish music that night to the Galicia Museum.  They have two photography exhibits: a visiting exhibit of photographs of Hasidic Jews and a permanent exhibit on traces of Jewish life in Galicia.  A group from Bnai Akiva was going through and the rabbi let them know how much he hated the exhibit on the Hasidim, which he felt bordered on the anti-Semitic (the photographer was almost certainly a secular Jew).  Afterwards, we chatted with an 80-year old woman from Seattle who is active in Polish-Jewish relations.

We made our way back to the hotel and I rushed off to the Mall to see if I could find someone to fix my glasses.  Both stores said they couldn't do it, but recommended different people in town who might.  "Go on Monday to this hold man on Szpitalna 7," one told me, "he can fix anything."  Of course, I leave on Sunday for Zakopane, so I'll try maybe on Tuesday as I transfer back through Krakow.

Finally, we went for our farewell dinner at Szara Kazimierz.  Although it was a little warm inside, there were no mosquitoes and everyone enjoyed their meal.  I ordered the planksteak again and it was excellent. 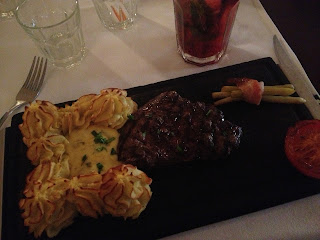 followed by the chocolate-vanilla sundae 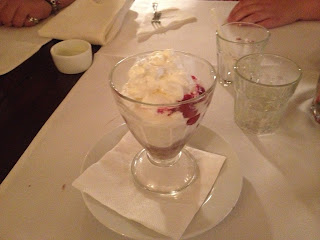 one student ordered the chocolate mousse with mint cream, but it was too much: 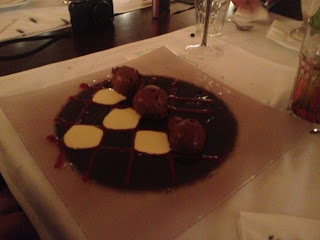 I also wanted to make sure we had a few group shots.  So here's one of all of us: 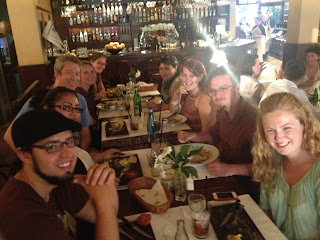 And here's one with just the students, after I turned that light off 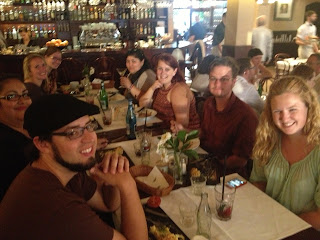 After dinner we went out to the concert (which was just outside the restaurant). 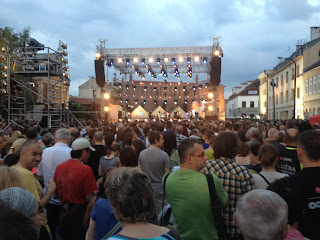 I'll try to post some of the video I took later.  Here it is:  head banging rock in Yiddish.


We all couldn't stop laughing when we saw this Polish hipster rocking out:

After it got dark we headed back to the hotel.  Two students left at 3 am, with the rest leaving at 7:30.  Here's their final breakfast in the hotel. 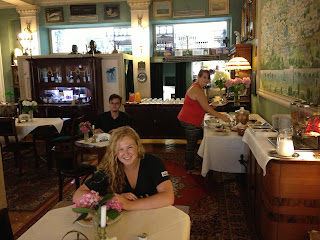 They've reached the airport so now all they have to do is make their connections.  I now need to check out and head to the bus stop to catch a bus back to Zakopane.
Posted by J.B. at 12:35 AM