My Last Dinner in Krakow

I decided not to go back to Szara Kazimierz for my last dinner in Krakow; I didn't want to take away from it being my farewell dinner with the students.  I wanted to have goose one last time before I left and when I passed by Kogel i Mogel and saw that they had been awarded a prize for their goose, I thought why not try here. 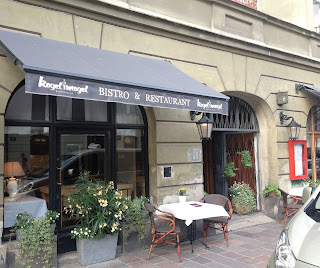 The inside of the restaurant was all set up for two different large groups, so I asked if they would take a party of one, and they said sure, as long as I was willing to sit in the garden patio.  I was fine with that. 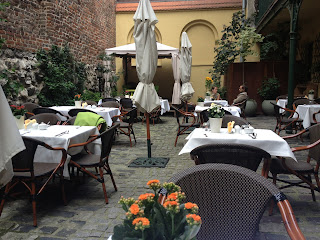 It was only about 6:15 pm, so there weren't many other diners out yet, but it did fill up.

In looking over their menu outside, I thought about getting the mushroom soup, but their seasonal menu and cream of white asparagus so I ordered that instead. 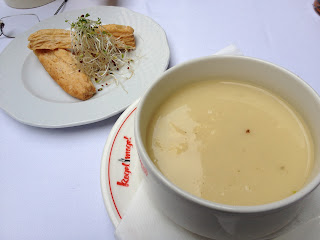 It was only OK, though.  More of a pale imitation (cough, cough) of the Spargelsuppe I had in Berlin.  Not bad, but the German versions were much better.

Thankfully the main course of goose leg confit with roasted plums and red cabbage was fantastic; the best goose I've had on this trip.  Delicious.  I ate all of it. 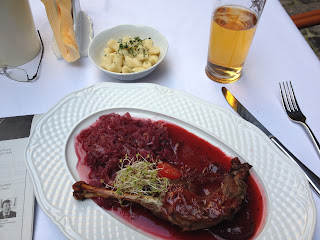 The waitress encouraged me to order a side, so I agreed to try the Polish noodles.  They turned out to be very much like potato gnocchi, but with a lot of fresh dill on top.  Poles really love dill as a flavoring herb. The noodles were just OK; I don't think I'd order them again.  The goose was definitely enough.

Since it was my last meal, I wasn't going to pass up dessert.  I ended up getting the hot apple tart and a hot chocolate with whipped cream. 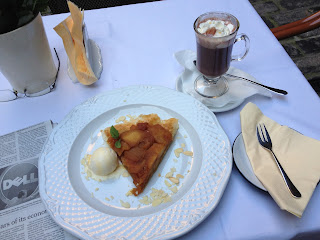 This turned out to be quite different than I expected.  Instead of the regular Polish szarlotka, with its shortbread base and top and lots of sliced apples in between, this was much more French.  The base was a puff pastry dough with apple sections placed on top.  It was good, but I think I like the szarlotka better.  The hot chocolate was excellent.

After that I headed back to the hostel to start packing up.  After getting nearly 8 hours of sleep last night, I'm up this morning about to have breakfast.  I don't really need to leave for the airport until about 10 am, but I'll probably leave 9 or 9:30 just to be on the safe side.  I'm checking in my suitcase for the return flight.  I have an hour and a half layover in Munich followed by a direct flight to Los Angeles.  I should be home late tonight.