A Prison Decorated by Ikea (updated with photos)

So first the good news:  I did sleep about 7 hours last night, only waking up twice.   I also recovered my camera.

Now the bad news:  the crappy internet will not allow me to post photos to blogger.  I'm going to have to update this post and yesterday's when I move into Nathan's Villa Hostel tomorrow afternoon.  The other bad news is that I have to spend another night in this place that basically resembles a prison decorated (cheaply) by Ikea.

What's missing from my room?  Where to begin?  1) curtains; 2) a closet or armoire; 3) a dresser; and 4) a towel (they did give me one when I complained).  Apparently, people staying in this hostel never unpack, or if they do, they just spread it out over the floor.

By the way, I'm not the only one having trouble with the internet; when I came back this afternoon, the receptionist complained about it being out and I helped her reboot it (by holding the ladder as she climbed up to flip the switch).

Breakfast is basically what you expect in a Polish hostel:  some bread, margarine, nutella, cereal.  That being said, the one in Zakopane was much nicer.

I've stayed in a lot of hostels in the last few years, in Poland, Germany, Austria, and Poland.  This is the first one I've ever been in that's only been twenty somethings. Basically, they're looking for a cheap place to crash after getting smashed.  Needless to say, I won't be staying here again.

I left early for the bus station, figuring it would be a more comfortable place to wait.  I planned on taking the 8:35 bus, but I heard them say "Krynica" over the loud speaker and noticed an unscheduled bus leaving at 8:15.  Figuring it would get there 20 minutes earlier I took it (after confirming with the driver it would go to Krynica.   This turned out to be a mistake, though not a serious one.

While it left 20 minutes earlier and did travel there directly, the bus driver stopped twice for 20 minute rest breaks, with the result that my bus arrive 15 minutes later than the later bus would have.  I hustled to my hotel and they had the camera waiting when I arrived.  I stopped off at the supermarket for some rolls for lunch and then caught the 12:40 bus back to Krakow. 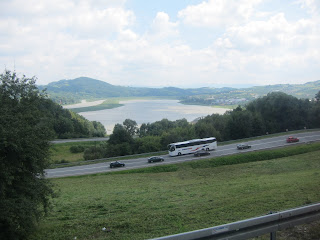 One of the strange things about the (few) freeways in Poland is that as soon as they add a second lane to the road, the wall it off from the surrounding countryside.  The walls make it impossible to see the countryside, which I find quite annoying, but I'm at a loss to explain why they've built them.  Among the possibilities:  1)  they're to protect pedestrians from trying to run across the freeway; 2) they are to prevent cars from crashing into fields; 3) they are to shield farmers from having to see trucks; 4) keep the noise and smog from the traffic from annoying farmers as they work in the field; or 5) to keep drivers from getting distracted by anything other than repetitive patterns on the walls.

Back in Krakow, I walked to the nearby Home Army Museum.  I had first visited this place in 2007 and ended up writing an article, in part, on it.  At that point, the museum still reflected its original creation in 1989; the only mention of Jews in Poland during the WWII consisted of an erasure on a map showing Warsaw during the 'Rising that said "site of former ghetto."  The current museum has been significantly changed. 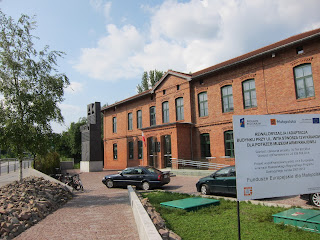 In some ways, it resembles the Museum of the Warsaw 'Rising, with lots of environmental staging of displays. 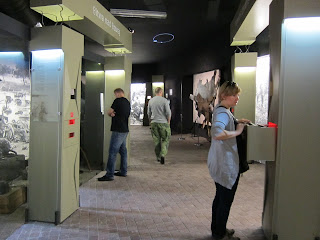 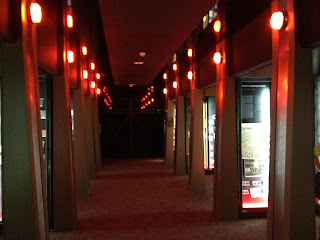 They've updated the text so that it now refers repeatedly to Jews, though the first mention is of how Soviet propaganda encouraged Ukrainians, Belorussians, and Jews to attack Poles in September 1939.  I'm not familiar with any Jews taking up arms against Poles. 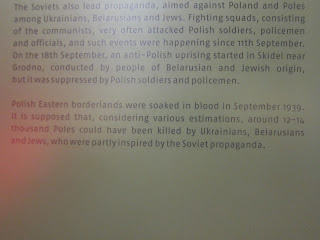 The other exhibits do mention the Holocaust and German aims to rid the territory of Poland of its Jews. 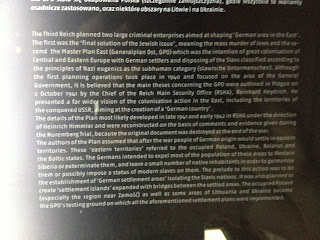 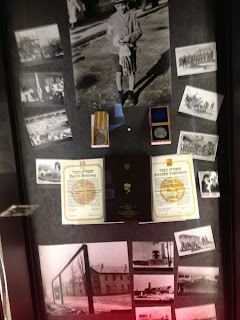 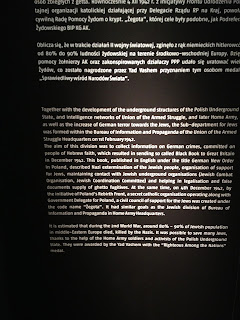 In other words, the museum still maintains a dichotomy between Poles and Jews in Poland, with the Jewish story being one apart from the Polish one.

That being said, the museum does have a good discussion of the fight over history in post-war Poland. 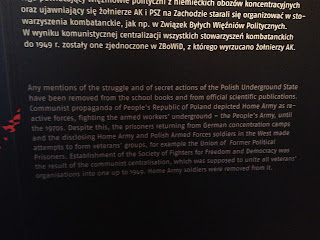 Afterwards, I walked back to the hostel, but stopped for some crepes where I knew they had wifi and I could check my email quickly.  I had the apple and cinnamon, but it would have benefited from some Schlag. 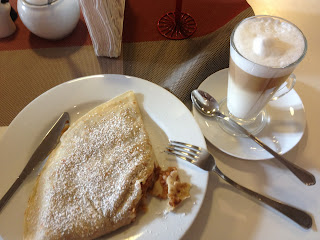 For dinner, I went back to the Old City to a cafe, passing a performance art installation along the way.  From what I can gather, it's called "Zarathustra," and they cite Martin Heidigger as its inspiration. 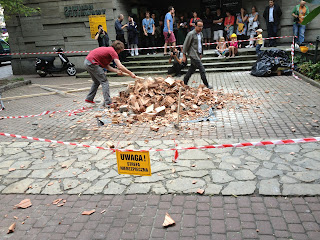 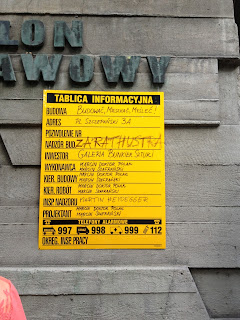 The guidebook praised Cafe Camelot, and since the weather had improved, I sat outdoors in the patio. 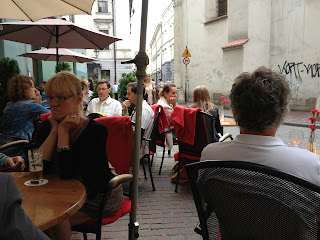 I decided to eat healthier, so I got the cream of leek soup, along with parmesan toast points and some bottled water. 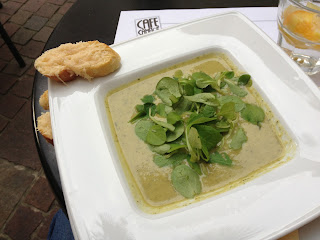 For the main course, I had originally ordered the pasta with spinach, but they were out of spinach, so I got the pierogi with meat and cranberries.  It was excellent. 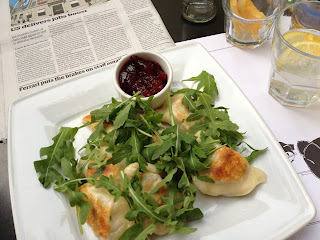 The sun was just beginning to set, so I took a walk to give my stomach some time to digest. 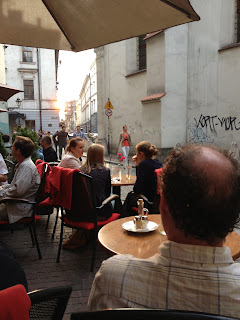 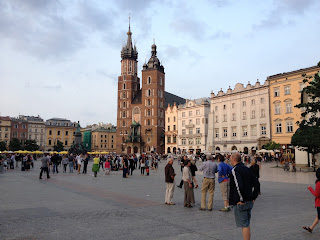 After a post-prandial stroll around the rynek, I headed over to the Dym Pub next to where I had dinner.  Described in my guidebook as an "alternative" pub, where most of the clientele are trying to work on their unfinished novels, 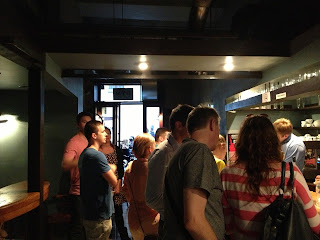 I ordered a lemon-walnut torte and a large krupnik. 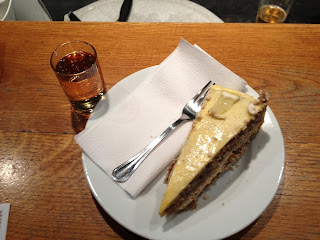 The torte was excellent, with the cake layers being crispy meringue japonais.  I was less thrilled with the krupnik.  I had tried some Miodula, a fancy form of krupnik and liked it so much that I bought a bottle to take home (I'm going to check my suitcase).  Krupnik is honey vodka and is rather sweet, but this tasted more like sweet whiskey.

Tomorrow morning, I'm signed up to take the 4-5 hour tour of the Wieliczka Salt Mines (all museums are closed on Mondays). When I come back, I'm going to do some shopping and then check into my last lodgings for Poland for this trip:  Nathan's Villa Hostel next to the hotel I stayed it with my students.  I'd hoped to spend these first two nights there, but they didn't have any single rooms left.

After I check in tomorrow night, I'll try to post the photos that the current crappy internet service keeps blocking.
Posted by J.B. at 12:54 PM