I had no trouble getting to Zakopane or finding my hostel.  I've stayed here before (in 2007). 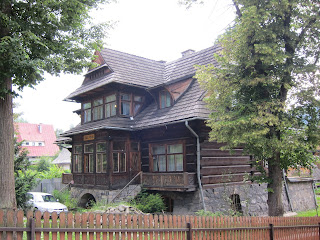 I checked in and went off for a late lunch near the pedestrian mall.  It was pretty overcast and I thought it might rain, so I decided to take a relatively short walk near town.  Called Dolina Strążyska, it's shorter, though a bit steeper than the walk I did on Thursday.

Unfortunately, I didn't take a bus from the central bus stop but walked instead, which effectively doubled the route.

Once I cleared the town, there were beautiful fields and meadows. 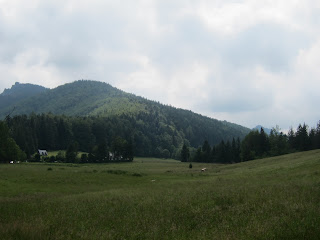 But a short while later, I came to the national park.  The trail begins gently and follows a stream all the way to the end. 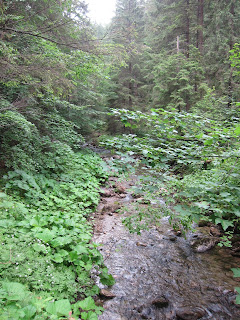 While the weather was a little cooler than on Thursday and overcast rather than sunny, it was still very, very humid. 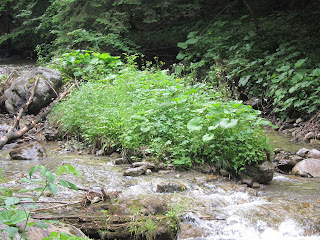 As the trail rose, the water in the stream started descending more quickly and it became a serious of small waterfalls. 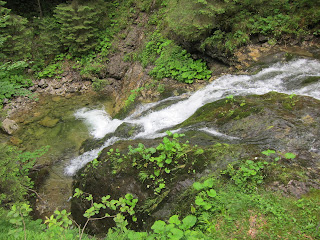 Above me, the High Tatras, a part of the Carpathian mountain change, came into few, emerging from the clouds. 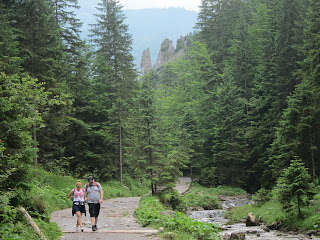 I took a short video to give you a sense of what it all sounded like:

Eventually, after about 35 minutes, the path reaches a small wooden hut, where they serve hot and cold food and drinks. 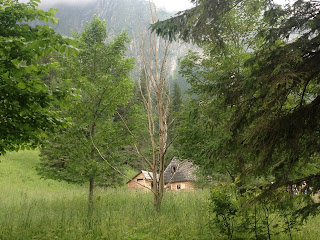 Inside, the kids line up to get their park visit books stamped, showing they completed the hiking trail, while everyone else goes to the "bufet" for cake or coffee or beer. 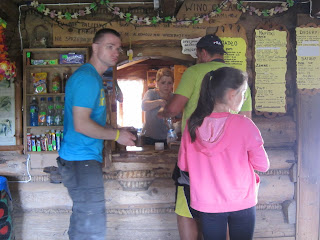 I went with the szarlotka with whipped cream and a cappucino (that was heavily flavored with hazelnut). 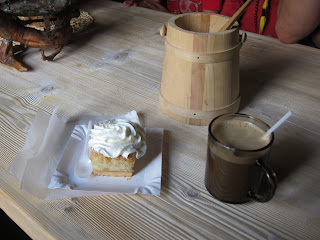 After taking another panorama view of the mountains around the hut,


I turned around and headed back down, admiring many of the wildflowers along the way.  Since I missed the bus back to town by 2 minutes, I decided to walk rather than wait an hour.  Back at the hostel, I looked up restaurants in town and decided to try Tuberoza, which had very good reviews.

They gave me some starters of smalec (a mixture of rendered lard and fried onions), liver pate, and some sauteed onions and tomatoes.  I finally broke down and tried the lard spread, which was surprisingly savory, particularly compared to the sweetness of the pate. 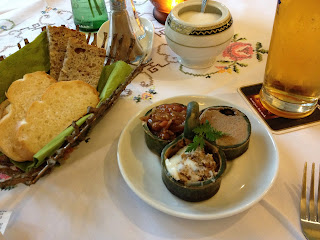 I chose the cream of mushroom soup to start and the duck breast in orange sauce for a main course.  Both were delicious. 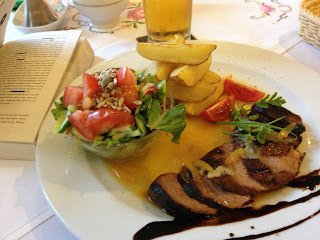 I was too full for dessert, but I had a nasty shock when I went to find my credit card to pay.  It wasn't in my wallet.  As far as I can tell, the last time I used it was last night when I paid for the farewell dinner with the students.

After paying in cash, I rushed back to the hostel and tried to first find the card and then cancel it.  Unfortunately, since I didn't keep a copy of the card number written down, Visa can't cancel it.  I have to go through the credit union.  I've sent them an email explaining the situation and I've emailed the restaurant.  My cell has run out of minutes and I have been unsuccessful in adding new ones.  I may have to pick up a new sim card.