Friday we visited Auschwitz-Birkenau, and I always knew this would be the hardest day of the trip: physically, emotionally, psychically, and spiritually.

Last time we went by public bus and had difficulty returning to Krakow as the last buses were full to overflowing.  With a group that was twice as big I didn't want to go through that again.  Also, I wanted to take the students to see an art installation in the basement of a church about 4 kilometers away, and that was too far to walk to and still get back.

The rental bus arrived at 7:30, but the students were still grabbing a quick breakfast.  We got on the road around 7:45 and drove the hour and a quarter to Auschwitz I (the Stammlager, or parent camp) where our guide was going to meet us.  We also met up with Irek and Anna Dobrowolski and Professor Steve Cooper.  Irek directed a documentary on Wilhelm Brasse, the prisoner who took the mug shots in Auschwitz and Anna is finishing the book on the subject.  Dr. Cooper, who teaches in the English Department, introduced me to both of them last year when we brought Irek to campus.

Anna had strongly recommended Marek as a guide and he was excellent. 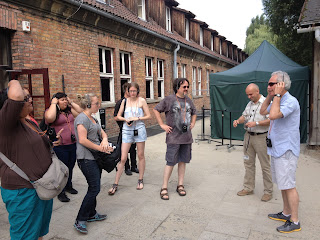 He gave a great overview of the camp and its operation and the plight of prisoners. 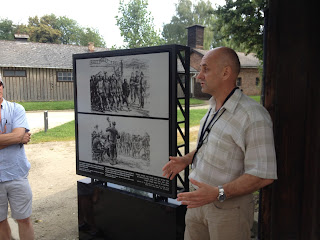 [Here Marek is discussing how prisoners left and returned through the main gate.  The drawings were done by a surviving prisoner in 1950].

We made our way through the main exhibits:  Extermination; Plundering of the Dead, and the Life of Prisoners in the camp. 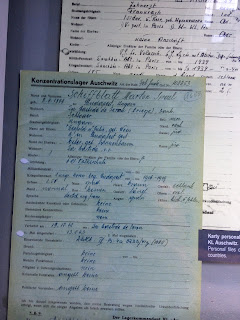 For me the hardest room is the one filled with women's hair.  Several tons of it were recovered at the camp when it was liberated by the Soviet army in January 1945.  Most had been shipped back to Germany for use in making fabric, but they ran out of time due to the quick advance of Soviet forces.

The rooms demonstrating plunder show various personal items stolen from those who were murdered.  These were then cleaned and sent back to Germany for use by the civilian population, since so much domestic industry had been converted to military use.

These artificial limbs were probably owned by veterans of the First World War, who had been wounded in combat, and were later murdered in the camp. 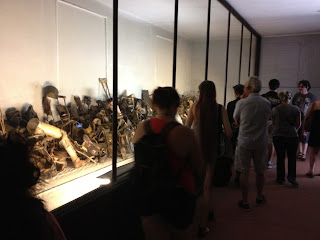 The exhibit on the plight of prisoners opens with a long hallway of mugshots, most of which were photographed by Wilhelm Brasse, a young photographer's assistant who arrived on the first transport of prisoners from Tarnow.  He survived and after the war found himself unable to work as a photographer as he kept seeing the images from the camp. 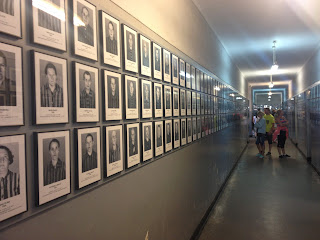 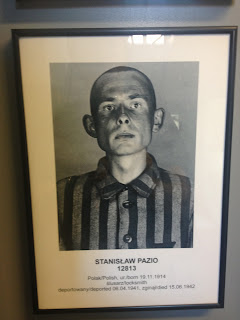 There was a particularly moving statue on display called "hunger" 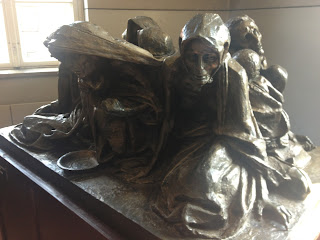 It depicts a group of young women prisoners who were sent to Birkenau and held there in the "Mexico" section of the camp for transfer to Germany.  Since they didn't work they were only fed once a day.  Many died from starvation as they waited to be transferred.

I had already decided not to enter Block 11, the punishment block. 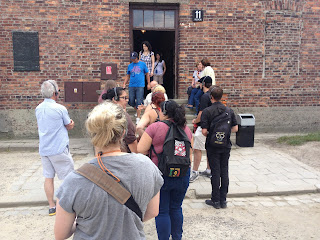 I find it too claustrophobic.  The corridors are very narrow and it's probably the most crowded of all the exhibits, so I waited outside while they went through.

Afterwards, we walked through the administrative section of the camp towards gas chamber and crematorium I. 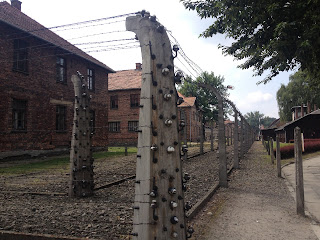 The camp commandant Rudolf Höss and his family (including children) lived less than a 100 or so meters away.

We then journeyed from Auschwitz I to Auschwitz II, better known as Birkenau, which was the largest slave labor camp in Europe as well as being the largest graveyard in Europe. 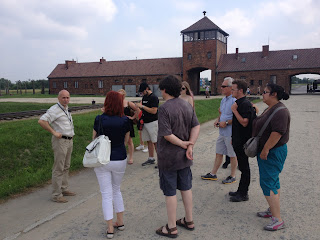 At any given time, there were about 100,000 slave laborers in the camp, with an average life span of three months.

The most crucial moment for new arrivals took place on the ramp. 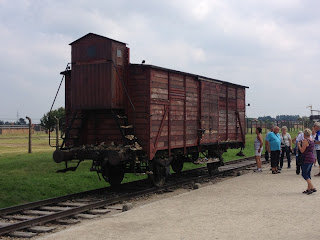 Here, they underwent "selection" to determine if they would be killed immediately in the gas chambers, or slowly through slave labor.  About 75% went directly to the gas chambers.

In October 1944, the Sonderkommando (prisoners who worked in the gas chambers) revolted and blew up crematorium IV.  In January 1945, the Nazis tried to erase the evidence of their crimes by destroying the installations, but they only had time to blow up the crematoria.  These are the remains of crematorium II: 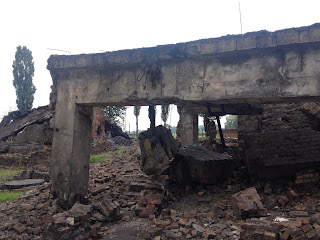 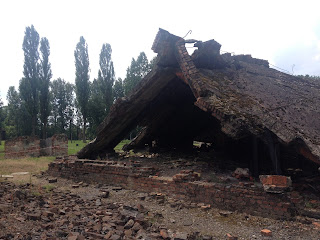 The ashes of those who were murdered were scattered around the camp.  This pond has a small amount of ash 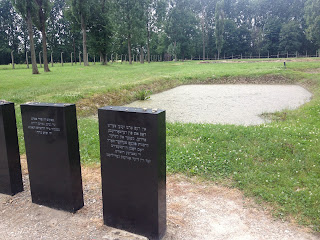 but in the wooded areas adjacent to the crematoria, they've found layers of ash between one to two meters deep over a wide space.

We had to cut our visit to Birkenau short because Marek's tour ran over by an hour.  We ate a late lunch around 2:30 and then had just a few minutes before our 3:30 workshop to visit the Roma pavilion. 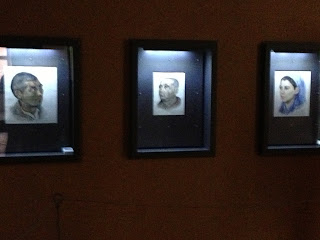 When the camp memorial was established under communism, victims were identified only by nationality.  Non-state groups like Jews and Roma were either barely mentioned (i.e., the Jews) or ignored completely (the Roma).  On the tour with Marek we visited the brand new Jewish pavilion.  The communist era one had opened in 1967 and was almost immediately closed in the aftermath of the Six Day War.  It reopened in the late '70s and it was pretty awful when I saw it in 2006.  When we were here in 2011 it was being revised and the new one had me sobbing.

We only had five minutes or so in the Roma pavilion, but I snapped this quick shot of some water colors that a Jewish prisoner painted in Birkenau of Roma prisoners at the direction of Dr. Mengele.  There's currently a lawsuit over who should own the paintings: the prisoner who painted them (who survived and lives in California) or the prisoners depicted in them (the Roma who were then murdered).

The workshop that Anna arranged for us was great.  We met with an archivist from the camp who gave a detailed story about just two people who were murdered in the camp:  a Polish prisoner who was in love with a Jewish prisoner.  They had successfully escaped the camp, but she was later captured trying to get food and he surrendered so as not to be separated from her. 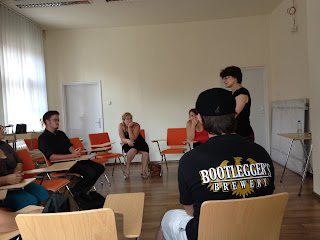 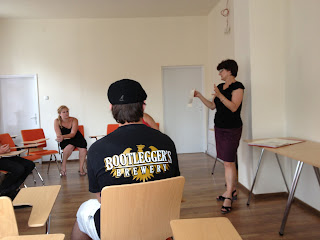 Afterwards, she led an exercise where she gave the students photocopies of documents from the Auschwitz archives and had them try to piece together the stories of individual prisoners.  Unfortunately, because of the delay, we could only spend an hour and not the hour and a half we originally planned.

That was because we still had one more thing to do: to visit the art installation by Marian Kołodziej in the basement of a church dedicated to St. Maximilian Kolbe near the camp.  I had seen a documentary on this exhibit two years ago and had brought the producer to campus to talk about it.  He helped make the arrangements and Anna contacted the church to let them know we would be arriving late.

By the time we arrived it was after 4:30 and the sky was getting dark and threatening.  After some difficulty, we were able to find Father Florian, who brought us into the exhibit, called "The Labyrinth."  Marian was an artist and a set designer, but he never spoke about his experiences at Auschwitz until he had a stroke about two decades ago.  As part of his treatment he had art therapy and the drawings flowed out. 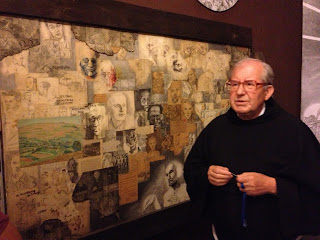 [The collage behind Father Florian shows Marian at different points in his life, from his pre-war childhood, to his arrival in Auschwitz on the first transport, to his liberation by U.S. forces near Ebensee, and to his post-war life and stroke].

Marian was prisoner 432 and he was sent to Auschwitz at the age of 18 with a friend of his from a Polish scouting organization.  I think they were suspected of plotting resistance activities.  This drawing depicts how he found his friend's dead body and brought him, with all the gentleness and respect who could, to the cart to be taken to be burnt. 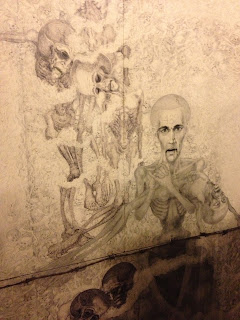 There's a strong religious element in these drawings, not simply because they are in a church.  There are many images of crucifixion and damnation.  Some of the drawings are on the ground under broken glass, which the visitor is expected to walk on.  I asked Father Florian about it and he said it was about the degradation of the human spirit. 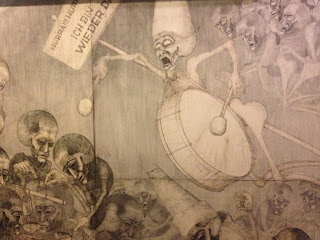 Many of the drawings focused on the plight and relationship among prisoners.  This drawing is a rather complicated set of images.  On the lower left you seen prisoners carefully weighing out each crumb of bread to make sure that everyone received exactly the same amount. 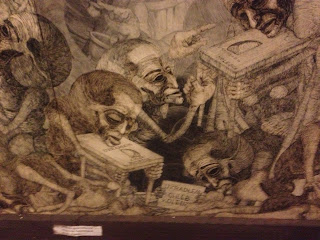 Below them are fantasy images of prisoners being punished for stealing from their fellow inmates.  Each bears a sign "I have stolen bread from a compatriot."  Meanwhile above them is a prisoner beating a drum bearing a sign "Hurrah!!! Hurrah!!! I am back."  Prisoners who escaped from the camp and were recaptured were paraded through the camp in such fashion before their execution.  In this context, though, the implication is that the true criminals were those who stole life from their fellow prisoners. 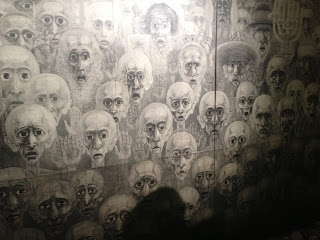 I had asked Father Florian about the hand gestures, since they can be read in so many ways:  surrender, defiance, pleading, or protection, but the students focused on the eyes.  Some were disturbed by the lack of human emotion in them, while others commented on how the SS forbade prisoners to look them in the eye.  We talked about the power of looking someone in the eye and what Marian might be trying to communicate with this image.

One of the most common and arresting images in the exhibit was Marian's juxtaposition of his prisoner self and his post-stroke self.  Here he shows how the former guided the later. 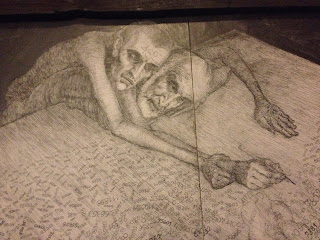 We only had time to spend about an hour in the exhibit, since I really wanted to get back to Krakow by no later than 7:00 pm.  The sky was very dark and threatening and we could hear thunder as we got in the bus back to Krakow.  We hadn't driven more than five minutes when the heavens opened up.  There was lightening everywhere, including one that hit a transformer as we drove by (we could see the sparks!).  I cut short the discussion as the storm was too distracting.    Eventually, the worst of it passed and we made it back to Krakow in one piece.