I woke to mostly cloudy skies, but with the occasional glimpse of blue sky, so I decided to take advantage of the good weather and head out to Mt. Jaworzyna.  After breakfast in the hotel restaurant 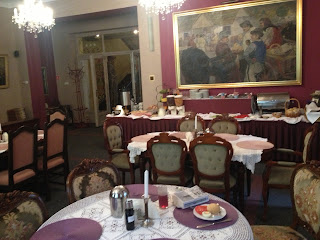 I started walking down through the town.  There is a "gondola" ride that takes one to the top of the mountain, but it's not in town.  I walked a mile through the town and found the turn off. 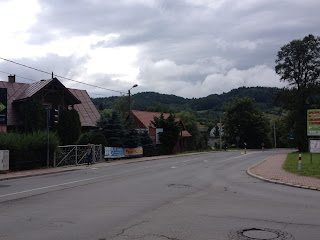 The bus dropped off at the base of the gondola.  These are much smaller than the one I took in Zakopane. 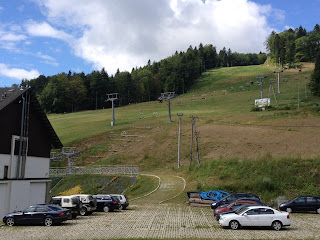 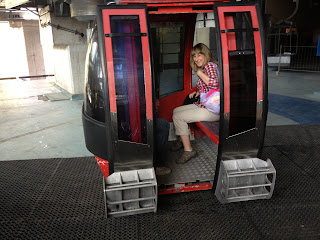 It took about 7 minutes to go the 2 kilometer distance to the top of the mountain.  In fact, at first you can't even see the top. 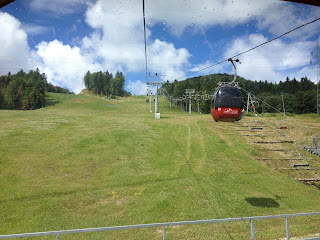 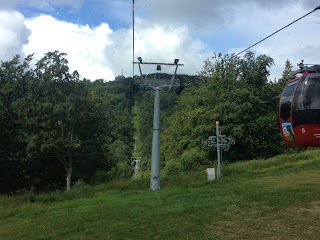 After about 4 minutes, the summit finally came in view. 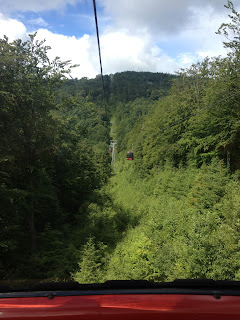 From the top, there are fantastic panorama views of the whole Beskid mountain ranges. [Blogger won't post that video; I think it's too big for them, so here are the regular photos]:

This is looking north and east, towards the lower Beskid mountain range. 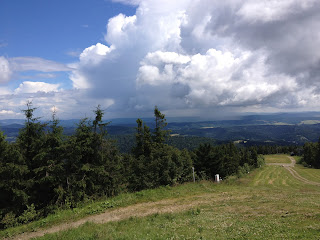 This is looking south and east, towards the higher Beskid mountains.  On the far left, you can just make out the outskirts of Krynica. 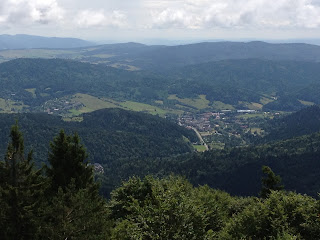 This is looking due south, towards the High Tatras and Slovakia. 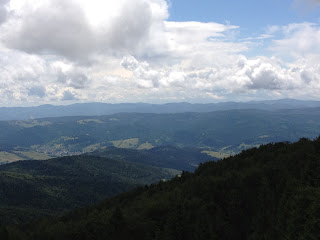 After walking around, I decided to get a cafe latte and enjoy the view (and the gorale music).  The entire set up reminded me a lot of Tennessee.


Soon after I shot this it started raining, so I decided to stay for lunch. 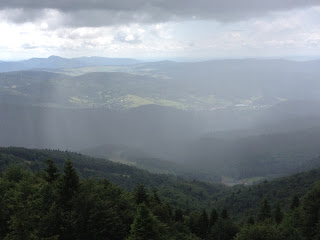 After lunch I walked around again for one last look and then took the gondola back down and quickly caught a bus back to town.

I decided I really should finally submit my article.  I went through the final comments from a colleague in Israel, made the necessary edits, and then submitted it for publication.  I worked on it in the hotel cafe and at one point I heard yelling, turned and looked out the window, and saw it was suddenly pouring rain.  The cafe quickly filled up with damp Polish tourists.

Eventually I finished and sent off my article.  In celebration, I stopped off at the cafe around the corner.  I hoped for the kremowka cake, but they were out so I was forced to order the chocolate ice cream sundae. 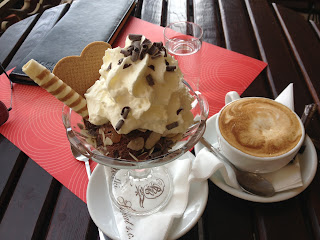 One of my favorite cookbooks, Kaffeehaus by Rick Rodgers, talks about the "Schlagobers" diet. This is where you just order everything "mit Schlag," that is "with whipped cream."  For some reaons, I'm not losing a lot of weight on this diet.

By 4 pm, it was still sunny, so I decided to take advantage of the current good weather and head back up the funicular.  Only this time I would hike back down.

The views at the top were still gorgeous.  The mountains in the far distance at the horizon are the Tatras. 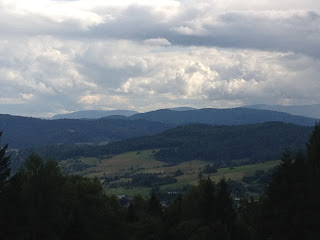 And there were pretty forests on the way down (though no panoramas of Krynica). 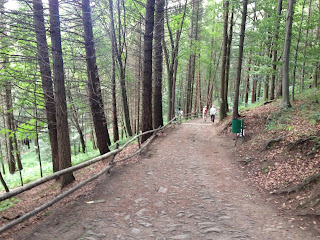 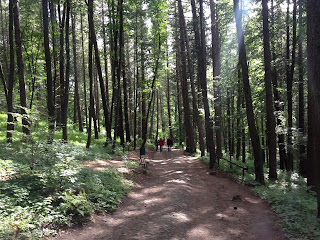 At the bottom, though, it got kind of confusing as all the reconstruction work had closed off several trails (which I only found out after I turned and reached a dead end).  Eventually, I made my way back to the town, where it was still sunny 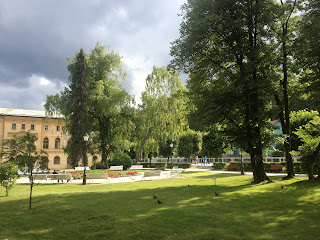 and the square was filled by the local Porsche fan club. 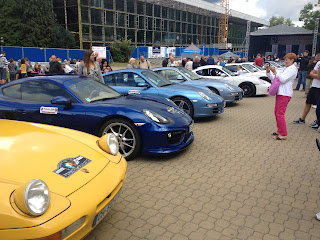 Back at the hotel, I called my mother to wish her happy birthday and then went to dinner in the hotel restaurant.  The only other people there were a mother and her young daughter, though I thought I heard her speaking English.  At one point, while I was waiting for my food we started to talk.  It turns out she's the owner of the hotel!

She had come to Poland in the 1990s on assignment for the World Bank and ended up buying a farm near Krynica.  Eventually, she bought the hotel from some Israelis who had put rooms on the ground floor.  She told me that when they bought it, the hotel had 80 rooms; now it has 20.  I asked her if the town could support a hotel with 80 rooms and she said there are some places with 500 rooms, shaking her head.

Poland has changed dramatically since the 1990s, she told me, and not always for the better.  The same forces that destroyed train service in the U.S., she said, were trying to do the same here, and force the Poles to buy my cars.  We talked for a while about Polish cities and she told me that she loves southern Poland and misses it every time she goes north.  She was surprised that I had come to Krynica, as they get so few Americans.

I saw that they had naleśniki z jabłkam, which are basically crepes filled with roasted apples and cream sauce, so I ordered it.  The owner left with daughter and I thanked her for letting me stay in her hotel. 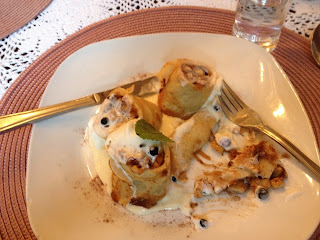 Meanwhile, the live entertainment is back in the lobby (I wonder if they have it every night).  I think it's the same group who mangled the English lyrics last night, but tonight they been playing almost entirely Polish songs, with only one in English.

Tomorrow I leave for Krakow.  I'm going to miss the high speed internet, but not the mattress in my room. 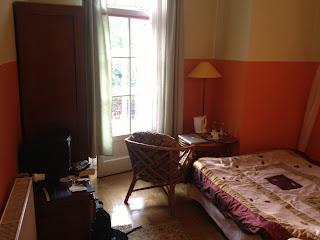