I built in "mental health days" to the trip to give the students some time to unwind and refresh after particularly difficult days.  Our "mental health day" began as soon as we got back from Lublin and Majdanek.

I knew that some of the students wanted to go out but were nervous about exploring on their own, so I agreed to go with them.  The guide book mentioned a collection of cheap bars in the courtyard behind Nowy Świat street, so I took four students and went there around 11 pm.  I told them that 1) I don't drink a lot; and 2) I would be returning to the hotel no later than 1 am.

The area is called "The Secret Garden" and it was very easy to find.  We walked through a wide arched pathway from the main street and found it very full of Poles in various stages of inebriation.  The drinks were not particularly cheap but (for those ordering mix drinks) they didn't stint on the alcohol.  We went to two different places and before you know it, it was 1 am.  I told them I was ready to go back.  "But you haven't finished your beer!" they cried.  That's ok, I told them, I had enough.  One student decided to stay on his own and I took the other three back.

I had originally planned to go to Kazimierz Dolny for my day off, but the thought of spending 2.5 hours on a bus each way, and with possible showers in the afternoon dampened my desire.  Instead, I took one student to the central post office (open on Sunday!) so she could mail home clothes and I could mail home books. 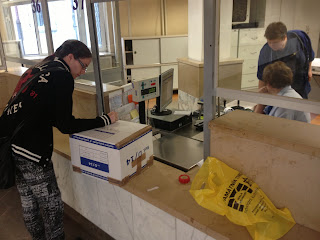 We met up with the rest of the students back at the hotel (some had gone shopping).  We split up into two groups:  one went to Praga to visit the Warsaw zoo (prominently featured in The Zookeeper's Wife), while I took the other four students to go looking for amber.  At first, this didn't go well.  The street, Świętokryzska. was being torn up for the new metro and we couldn't find anything.  Finally, we just went for peirogies on Nowy Świat while I consulted the map. 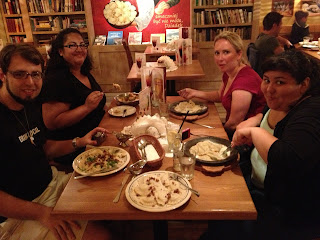 I soon realized that I was on the wrong street; I had gone to Świętokryzska when I should have gone to Świętojanska (which was very easy to find near the Rynek in the Stare Miasto).  It's more confusing when the letters on the map are so small.

The amber stores were filled with a variety of beautiful pieces and most everyone bought something. 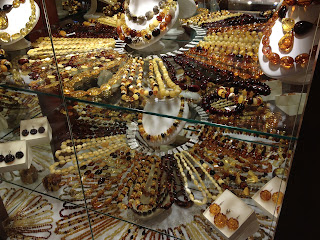 We then wandered from store to store, looking at tchotchkes and other stuff.  One store had a rather disturbing collection of folk-art style pictures of rabbis counting money. 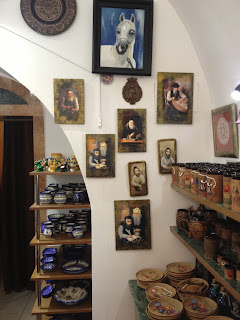 We headed by to Nowy Świat, and strolled down the street.  There's always some interesting street art in Warsaw. 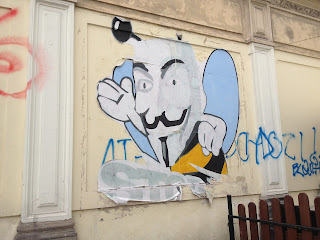 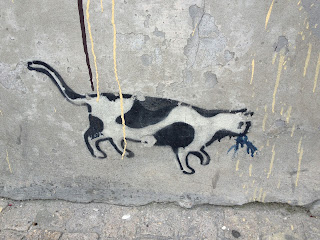 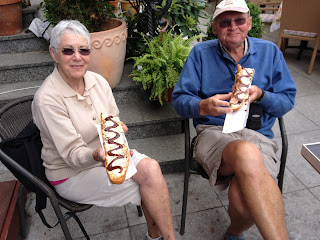 Blickle Cafe, a wonderful sweet shop from the nineteenth century (though reconstructed with the rest of Warsaw after 1945.  I went for the custard-cream cake, which was yummy. 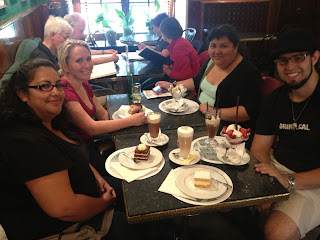 [I need to check out of the hotel to head to Krakow; I'll update this later, add photos and hopefully add material on yesterday's trip as well]

I suggested to the students that if they wanted, we could go out to dinner at 7 pm.  Back at the hotel I caught up on detailing my expenses and I emailed the first group to let them know if they wanted to join us.

Most of the students wanted something either light or green, so we headed off to a salad bar.  Unfortunately, its times had changed since my guide book was published and they closed at 6pm on Sundays.  We ended up going to a place a few doors down.

I got the crepes with cheese and onions, which were quite good. 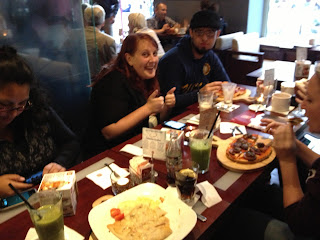 One student loved her chocolate ice cream sundae with cherries and cherry syrup, so I ordered one too. 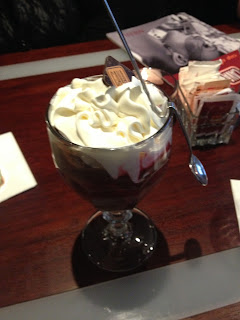 On the way back, we stopped off at The Secret Garden, but it loses some of its cache in the light of day. 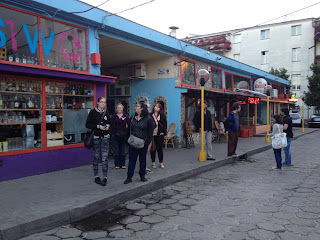 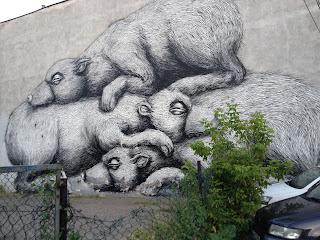 After that we headed back to the hotel to get a good night’s rest before we went back to class (and Łódż) the next day.  We passed a mural on Jerozolimskie that looks like it's from the communist period. 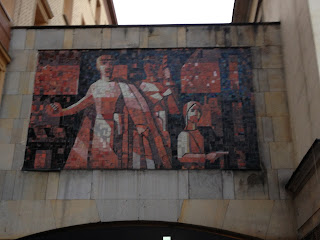 I left the students to go buy our tickets to Łódż and Kraków.  This is the hell that always awaits me at Warszawa Centralna. 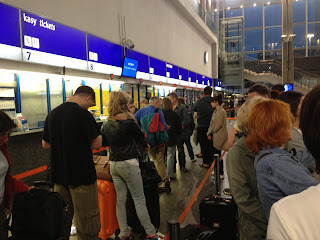