Our hotel here in Warsaw is conveniently located.  That’s about it when it comes to praises.  The students all commented on how small the shower and bathrooms are (one compared it to being on a submarine).  The good news is that we only have one more night here.

After the long, overnight train where so few students got restful sleep, I delayed the start of today’s class until 10 am.  Our goal this morning was the Museum of the Warsaw ‘Rising.  While very well known in Poland, few non-Poles have heard of it.  This is because for over 40 years, the Polish Community Party did everything it could to suppress the memory of it.  At 5 pm on 1 August 1944, the Home Army, the largest underground in Europe launched a rebellion against German rule in Warsaw.  In a matter of hours, the Germans were successfully driven out of much of the city.

The goal of the ‘Rising was to free the Polish capital before Soviet troops entered.  The Soviets had already created a communist-led provisional government in Lublin, and the Home Army and the Polish Government in exile in London wanted Warsaw to be independent and run by the Polish government.  As Soviet forces approached the east bank of the Visła River, the Home Army acted.

The decision was controversial among the Home Army and Polish Government leaders because while the Home Army had enough weapons to drive the Germans away, they couldn’t hold the city against a sustained counter attack.  The Home Army’s plan depended on Stalin coming to their aid by continuing its advance across Poland.  This was a fatal mistake.

Stalin’s forces halted their advance and he, for a while, refused to allow American planes seeking to aid the Poles, to refuel in Soviet territory. Eventually, Stalin relented, but only after he realized that the air drops had limited effectiveness (most of the supplies fell in the river or the German zone).  As the Germans advanced through Warsaw, they destroyed the city.  When the Woła well, all 40,000 inhabitants were massacred.  First the historic renaissance-era city center burned, followed by the surrounding neighborhoods.  By October, Warsaw was forced to surrender to the Germans, for a second time.  Nearly 200,000 (out of 900,000) Varsovians were dead and the city was little more than a pile of rubble.  Almost all the remaining population was deported to internment camps, concentration camps, or to Germany for forced labor.  When Soviet forces finally cross the river in January, less than 1,000 people still lived in the ruins of the Polish capital.

Warsaw was so badly damaged that it wasn’t clear if it would be rebuilt.  If you search for images of the 1948 Monument to the Warsaw Ghetto Uprising, look for one that shows the area around the monument; you’ll see that there’s only rubble.

The Museum of the Warsaw ‘Rising is not the world’s most coherent museum.  The numbered signs for museum sections, for example, no longer match the numbers in the official plan.  Still, one can get a pretty clear sense of the course of the ‘Rising and the massive losses endured by Warsaw despite their heroic struggle.  The end of the exhibit there’s a 3D computer recreation of the ruins of Warsaw a few months after Soviet forces retook it.  It’s devastating.

We headed over to the reconstructed Old Town, walking from the rebuilt Warsaw Castle 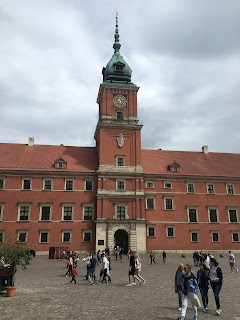 to the rebuilt Old Town Square (they used Canaletto paintings to get the colors of the buildings right. 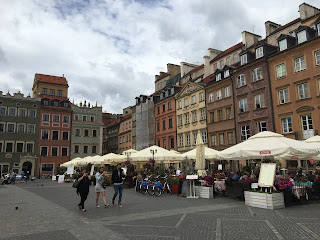 I gave the students an hour and a half to get lunch and do some souvenir shopping, pointing out a few good places to buy amber.  I headed over to a milk bar I like just outside the Barbican.  A milk bar is a communist-era institution that’s really just an old-fashioned cafeteria.  You buy your food and the grandmothers pass it to you through a hole in the wall. 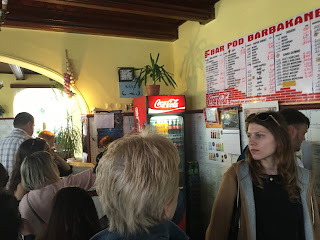 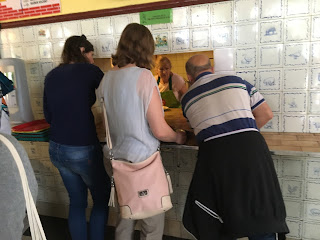 Afterwards, we walked down to the Umschlagplatz (deportation square), where we went over the fate of the 300,000 Jews from the Warsaw Ghetto who were sent here between July and September 1942, and from here sent to Treblinka Death Camp, where virtually all of them were gassed on arrival.  Nearby is the monument to ghetto fighters at Miła 18.  The bodies of the 100 fighters who died here, including their commander, the 23-year old Mordechai Anielewicz, and many civilians who had taken refuge in the largest of the bunkers in the ghetto, still lie under the one-story high pile of rubble.

Along the way, I noticed some anti-Semitic graffiti showing the Star of David on the gallows, had been drawn on a wall near the Old Town. 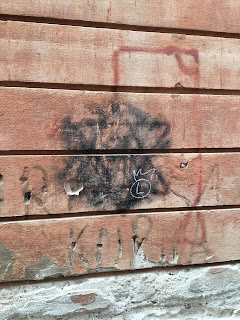 I took the students back to the hotel.  I think they are going out tonight to the free concert next door.  They went last night and had a very good time.  All evening, trams have been dropping off 100s of young Poles to go to tonight’s event.

I went instead to Nowy Świat to Blikle Café, a very upscale café on a street closed to traffic on the weekends.  Instead of cars, it’s full of Poles strolling in the late afternoon sunshine.  I ordered a Kremowka (also known and a Napoleonka) and a cappuccino and read today’s paper, while watching the parade of Varsovians and tourists walking past. 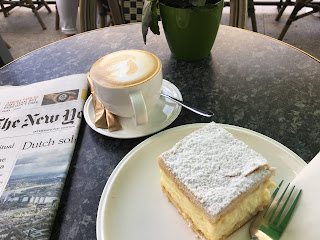 It was a little late in the afternoon for such a rich dessert, so I knew it would affect my appetite for dinner.  In the end, all I ate later was a roll and some orange juice.