Slept well last night, best of the whole trip.  It was only the second day in more than two weeks that I slept without chemical assistance.  Between my jet lag and minor illnesses, this has been a rougher trip for me than I’m used to.

There seems to be a good dynamic building among the students.  Some of the students have travelled to Europe before, and they’re encouraging adventurous outings after we’re done for the day.  Last evening, they chose to go up to the top of the Fernsehturm, and I think they picked out a few new places to explore tonight.  This is what I want to see:  students discovering that they have the ability to not only survive but thrive in places where they don’t speak the language.  I want them to not only learn the subject of the class, but have adventures that can inspire them to travel more and see the world in new and fascinating ways.

The official plan for today was to deal with the rise of the fascist state.  In the morning, we headed out to the Topography of Terror, which deals with the rise of the SS and the Gestapo and Heinrich Himmler.  In the afternoon, we went to the Jewish Museum to see how German Jews responded to the challenge of Nazism.

At the Topography of Terror we looked at the strange nature of the Nazi state and the way the bureaucratic structure kept shifting based on the power struggles between Hitler’s subordinates.  That meant I often struggled to explain the precise and changing relationship among the S.A., the S.S., the Waffen S.S., the Gestapo, the Gestapa, the Order Police, the Criminal Police, and the S.D. All of them (except the S.A., which had become almost irrelevant) ultimately were under the control of Himmler.  It’s precisely because Hitler did not create a stable bureaucracy that this kind of anarchic totalitarianism was possible.

It’s a short walk from there to Checkpoint Charlie, where we could see the actors dressed up as American soldiers posing for pictures with tourists (for a fee).  We’ll see the Russian versions tomorrow when we go to the Brandenburg Gate.  A quick hop on the subway and we were at Mehringdamm where we went to get my favorite street food in Berlin:  Mustafa’s Gemüse Kebap.  The food is really good and really cheap; my meal of chicken döner (what I think of as schwarma) was only 3.50 euros.  The only real cost is the wait in line (25 minutes – though I’ve waited twice as long before).  Almost all the students tried it and claimed to love it.  All of them were full afterwards. 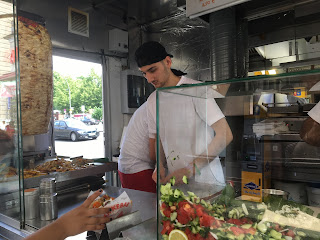 Walking to the Jewish Museum, we happened on a street fair in Kreuzberg: the Carnival of Cultures.  Kreuzberg is very much an immigrant neighborhood, with Turks and Syrian refugees, but today it was taken over by food tents and carts from all over the world.   They could hold this event today (a Monday) because it’s a holiday in Germany:  Whit Monday (the second day of Pentecost (or יוֹם טוב שני של שבעות). 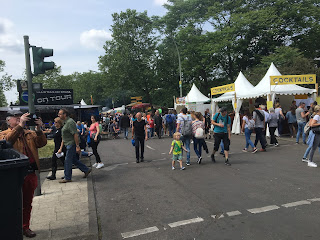 We had no trouble with finding our guide at the Jewish Museum, but I think he had a bit of “attitude” about groups who only want to learn about the Holocaust, and not how German Jews had lived in Germany for over a thousand years.  I’m sympathetic to that complaint, but at the same time, I have limited options on a trip like this.

We only did one of the art installations in the museums (the Garden of Exile – which he handled quite well). 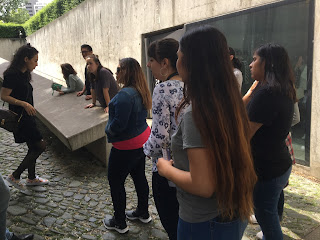 I brought the students to two others – the Void of Memory and the Tower of the Holocaust. 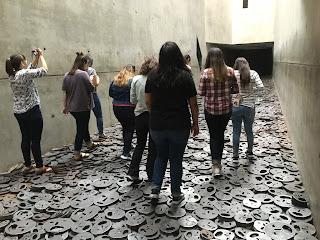 Afterwards we processed the day and talked about the differences between the two museums:  the first being much more didactic and narrative, and the second being more artistic, individualistic, and open to interpretation.  I pointed out that the former was dedicated to telling the story of the people with power: the perpetrators.  For all the chaos of Nazi governance, it’s still primarily a single narrative.  The Jewish Museum is about the experience of the victims, which means even if we focus just on German Jews, we’re talking about 560,000 separate stories.  That requires a radically different approach.

We headed back to the hostel and the students headed off for ice cream while I went over to Café Einstein Stammhaus near Nollendorf Platz.  This is the original location of the Viennese café I had already visited on Unter den Linden.  Usually, I sit out in the garden in the back, but I could tell it was going to rain.  I ordered a Blaubeer – Sauerrahmtorte (a blueberry – sour cream torte) with Schlag (whipped cream) and my usual: a café au lait that makes three cups. 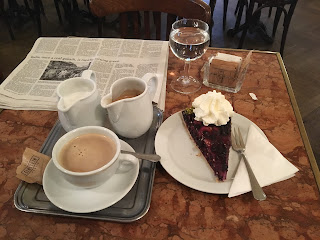 I then caught up on the news and read my book for about an hour as it started to rain.

Back at the hostel I did a search for Jewish restaurants (the students had expressed interest) and set off to find any nearby.  Beth Café is only about four blocks away, but looked closed and had a police van parked in front for security.  I saw a restaurant called “Yarok” (“green” in Hebrew), but it turned out to be Arabic, not Hebrew, and was a Syrian restaurant.  It was packed, so I found a table outside and sheltered from the rain by the awning.  Pretty soon, there was a line standing behind me waiting for tables.  I decided to get something light, so just ordered the falafel.

I’ve arranged a tour of Berlin led by a Syrian refugee on Wednesday afternoon.  It ends at a Syrian restaurant (not sure which one yet).  I think the food is not included in the tour fee, but supports a local refugee family.  Tomorrow, it’s supposed to rain again in the afternoon, when we’re walking around Sachsenhausen.
Posted by J.B. at 1:02 PM