Of all the first world problems I have on this trip, none are more annoying than poor wifi.  I don’t think I would mind so much about it, if the providers didn’t proclaim how good their wifi was.  If they said, stay in my hotel, or ride my bus, or use my laundromat, and maybe I’ll have wifi you can use, or maybe not, or maybe it’ll only work in one or two spots, then I would have realistic expectations.  But when they say “come use our high speed internet” and it takes five minutes to upload a photo (if it works at all), then I feel like I’ve had a bait and switch.

It’s mostly about posting photos to the internet or checking on the news, but it can be annoying, whether it was in Dresden or here in Prague.

I’ve never stayed in this hotel in Prague before and I was pleasantly surprised by how good the breakfast was.  No tomatoes, but they had good bread, cake, fruit, juices, yoghurt, meats, cheeses, eggs, and, for the British, kippers and baked beans.  I slept well, as did the students; I didn’t get up until 7 am, the latest I’ve slept in a while.

Today the plan was to head out to Terezin via Holosovice.  I’ve done this trip with students three times before, and on my own twice before that, but I’ve never experienced anything like what happened today.  We arrived at the bus stop 15 minutes before the bus’ scheduled departure and I expected that there might be 5 or 6 people there waiting.  Instead, the bus was already admitting passengers and there was a long line to get on.  It turns out that another study abroad tour (from Virginia Tech), twice as big as mine, was already on board.  Thankfully, my class managed to get on, but they had run out of seats ten passengers before us, so we had to stand the hour’s drive to Terezin.  Thankfully, there was air conditioning as it got a little warm inside. 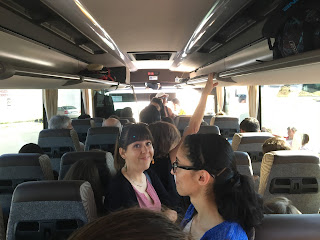 At Terezin, we headed first to the Ghetto Museum where I arranged for us to see the 30-minute documentary on the history of the town and the ghetto.  Then we toured the main hall.  The ground floor has a small exhibit on the Boys’ Home in the ghetto and the fate of children.  The upper floor is a history of the ghetto and the fates of its prisoners.  I warned the students about the quality of “lunch” at the museum (I used the air quotes as I spoke) and told them that since the “food” wasn’t very good, they should bring apples or oranges (or both) from the breakfast buffet.

It’s strange walking through Terezin, as the streets and buildings still feel deserted.  Several of the students commented on how strange it would be to live in the former ghetto.  The Jews were mostly forced to live in the military barracks, so I’m not sure how many of the other apartment buildings were included in the ghetto.  The entire town feels as if it’s in suspended animation.

Thankfully, they’ve finally relaxed the rules on picture taking as long as you aren’t using a flash camera, so I took more pictures of the art created in the ghetto.

For example, here's the portrait of Gideon Kleins by the artist, Ch. Buresova: 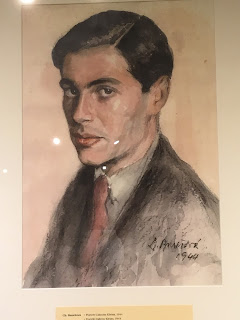 I was taken by one satirical song, written by Leo Strauss and called “As If”.  Here’s my rough translation:
As If

I know a little, tiny town
A little town totally tip top,
I don’t call it by its name,
I call it the city of As If.

Not all people may
Enter this city,
One must be chosen
Of the As If race.

They live their lives there
As if it was a life,
And satisfy themselves with rumors,
As if they were the truth.

And men on the streets,
They run at a gallop –
When one doesn’t have anything to do,
He still acts that way as if.

And there is a coffee house
Similar to the European Café,
And with the musical accompaniment
One feels as if one is there.

And some of them are with others
Sometimes quite big –
At home, he wasn’t a big man,
But here he makes so as if.

Mornings and evenings
One drinks “As If” coffee,
And on Saturday, yes on Saturday,
Then there is “As If” hash.

One is asking for soup,
As if there is something in it,
And one enjoys the cod
As If It had vitamins.

One lays on the ground
As if it were a bed,
And thinks on one’s love,
As if one had news.

One carries the hard fate,
As if it is not so hard,
And speaks of the more beautiful future,
As if it were already morning.

Leo Strauss was deported to Auschwitz from Terezin on 12 October 1944, where he, and later his wife, died.  You can hear the original German-language version of this song sung here:  https://www.youtube.com/watch?v=Hvt3niCdiJk 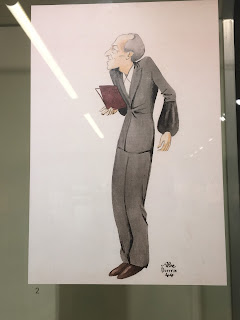 A portrait of Leo Strauss


By the time we finished it was nearly 2 pm. There are two buses back to Prague from Terezin on Saturday afternoons:  3:05 pm and 4:05 pm.  Given how many people were on the bus from Prague, I didn’t want to run the risk that not all of us would make it back, so I opted for the earlier bus. That meant we really didn’t have the time to go to the small fortress, so instead we went to the mortuary and crematorium, which I haven’t taken students to since 2011. 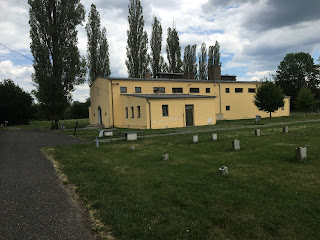 One of the students and I discussed the oddness of a pension, located on the crematorium road between the city gate and the mortuary.  Who would ever want to stay there?  It turned out that the crematorium is closed on Saturdays, so we made our way to the columbarium and then back to the main city square to catch the bus back.  Thankfully, as I found out later, the VT students had taken the 1:30 bus, so we all had seats to go home.

Back in Prague, I went to the laundromat to do laundry, and who should I run into but both professors from the VT tour.  We swapped notes and stories while we waited for our laundry to dry.
When I got back to the hotel I ran into several of the Mexican and Mexican American students.  I had heard that there was actually good Mexican food in Prague (although I was dubious), so I helped the students find it (it was only an 11-minute walk away). I think the students would have preferred (just a little) for me not to be there, as I think I inhibited their conversation (which they could have had entirely in Spanish).  Still, they couldn't have found it without me, so I earned my place at the table.
As it is, we were all pleasantly surprised by the place. Many of the students were craving the spices of home. I've noticed in the past that the one thing most students are homesick for is Mexican food and spices. 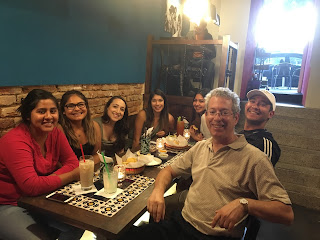 Our waiter was from the same state in Mexico as where one of the students was born, and they all enjoyed laughing and joking with him.  I had told them not to get their expectations up too high, but it really was quite good.
Posted by J.B. at 2:03 PM