The day started with the good news: I finally heard back from the JCC in Krakow; they arranged for some members and volunteers to meet with us this evening at 6 pm.  Our bus picked us up and took us to Krakow with no problems whatsoever.  It only took us four and a half hours (with a half hour break), rather than the six to seven hours if we had gone by train.

The first monkey wrench happened when we checked in.  The staffer at the front desk said the university had only put down 20% deposit, when I was certain that not only had they paid the full amount, but had, in fact, overpaid.  Since the university only paid after I had left, I didn’t have any documentation.  The university sent me the materials today and I forwarded them on to the hotel this evening.

Ok, so that’s pretty minor.  The next thing was getting metro passes for Krakow.  Normally, I buy them at the train station, but we came by charter bus.  I found a machine and tried to buy the cards, but it wouldn’t take my credit card, and my 200 zloty bill was too big.  I went to the bakery and broke it to four 50s, but then it wouldn’t taken my last coin to complete the amount.  I told the students we were walking until I could find a better machine.

I eventually found a machine, but it ate one of my metro passes, giving me only 8 instead of 9 discount passes.  Frustrating, but hey, it happens.  Off to the rynek glowny, the sukennice, and St. Mary’s church.  We hear the trumpeter, and head up to the vodka tasting place, only now, they charge for tasting the vodka (unlike two and four and six years ago, when it was complimentary as a way of boosting sales).

After exploring the Florianska Gate, we head to a dessert and coffee café for some refreshment.  The girls school, whose wifi we could in the past pirate is now an gym specializing in pole dancing.  After a long, long delay our desserts come, and, thank God, they’re actually good. 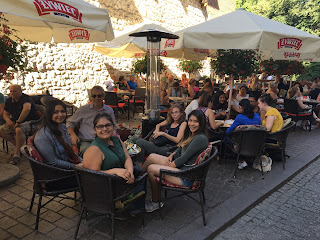 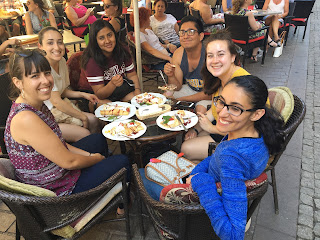 I’m starting to relax, I pay the bill, and am planning to walk to the main train station when one of the students asks if we aren’t going to the JCC.

OH MY GOD!  Well, it’s not too bad, we have 25 minutes to get there. I’ll skip buying my newspaper and we’ll just get the tram to Kazimierz.  As I leave, one of the students asks about my backpack, which I had left under my chair.  I rush back and start to leave, only now they point out I’ve left the pouch open. Not running on all cylinders today.

Now I’m in trouble.  I have no idea where I can catch a tram to Kazimierz.  It’s 5:45 pm and our meeting is in 15 minutes.  I take off walking, trying to find a tram, leaving the slower students racing to keep up.  Eventually, I find a tram, but were across the street and the crosswalk is way down the block.  I was two steps into the street when I realized I was about to crushed between a tram and a car, and ran back to the sidewalk.  Eventually, we got the right tram and made it to the JCC only five minutes late.

I thought the discussion went well.  Yakub began by talking about the history of the JCC and the work it does within the community.  Lila talked about what led her to volunteer at the Center, despite her not being Jewish, while Olga talked about discovering her Jewish roots. 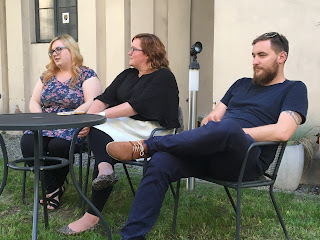 I think I’ll continue this in tomorrow’s post; I’m getting tired.
Posted by J.B. at 2:28 PM