My Battle With Accounts Payable

This entry will be doing double duty.  I had hoped to post something last night, but a crisis yesterday evening involving the university’s accounts payable changed all that. But let’s back up a bit.

I started my last day of research by heading out to the Film Archives in Potsdam.  After a very long S-Bahn ride, I transferred to a tram for a seemingly just as long ride to almost the end of the line.  Way out in the countryside, far from Frederick the Great’s San Soucci palace, is a little set of trailer-like buildings housing the state film archives. 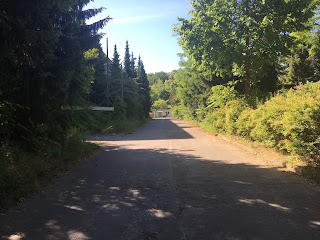 I found the relevant archivist and she brought me to a room with two binders full of material on the film I’m researching.  It turned out to be the clipping collection of Paul Seiler, Zarah Leander’s biggest German fan.   An hour and a half later, my work on my article was done and I made my way back to Berlin.

So what have learned on this research trip to help me complete my article?  While I still have not located any direct evidence of Balz’s second arrest by the Nazis I was able to confirm the following:

1) The time line of the film’s production matches the Balz’s version in several aspects.  He claimed the film’s production was delayed twice – first by logistical difficulties and second by his arrest in early September, 1941.  In fact, the script was done in June, but filming did not begin until the end of September, three weeks after he claimed he was arrested and around the time he claimed he was released.

2) The time line of the film’s production does not match the version described in Micaela Jary’s novel (the alternate version of his arrest) as she wrote he was arrested in February and that Leander recorded the two songs at the end of February or beginning of March, 1942.  In fact, one of these songs was already being played on German radio, I found, as early as January 22, 1942, while photography ended on March 18th.

3)  That Reichsminister of Propaganda, Joseph Goebbels, was aware of Balz and in March 1942, imposed limits on his employability because of his prior arrest for homosexuality.  This discussion of Balz and his fate took place during the film’s post-production, now that Balz’s work on the film was done.

4)  That Balz’s name was omitted from the film’s credits and from all the film’s publicity, with only his composing partner being mentioned as the author of the film’s songs.

Feeling rather celebratory, I went back to the hotel, and started incorporating this last material into my article and began to prepare to submit it for publication.   This, of course, required a cafe au lait and a slice of Walnut Cream torte. 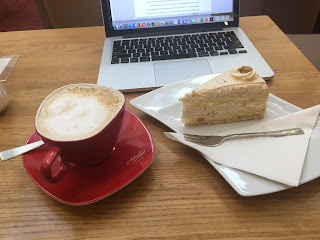 Then I headed down to the Komische Oper to see the newest production of “Carmen,” before my students arrived on Saturday.

I had a nice chat with a couple from North Carolina seated next to me (she wanted to know how to get the subtitles in English to display on the back of the chair in front of her; he’s a historian of North Carolina politics).  Then we all sat back to watch the show.

For reasons I cannot explain, a poster of Javier Bardem with glowing red eyes and the word “death” appeared over and over in the back ground of the opera. 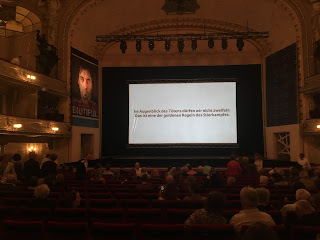 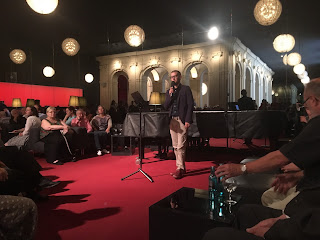 Instead of Spain, the setting is East Germany in the 1980s, where the cigarette factory of Seville has become a burned-out supermarket in front of a drab communist apartment bloc.  The staging actually seemed to have an excess of imagery as in Don Jose’s crazed state, we first see Carmen as a voodoo priestess, complete with skull-faced markings, while Micaela, Don Jose’s proper, bourgeois intended, is literally a Madonna, with blue robes and crown.

The imagery and the timing of the story become somewhat confused as the story unfolds, and I wasn’t sure at one point if we were still before the fall of the Wall.   Video playing in the background seemed to reflect Third World revolutions of the 1980s, while other imagery was of south or central American cityscapes.  The confusion of images detracted, rather than enhanced the performance.  I could have also done without the onstage rape of Carmen by Don Jose before he stabs her nearly a dozen times.

Far more distracting was the news I got when I made the mistake of using the Komische Oper wifi to check my email to make sure there weren’t any problems with my students’ departures. Instead I found that the university accounts payable still hadn’t paid my hotel in Prague. I was steaming mad when I got back to my hotel and started to send frantic emails.

This morning (my time), I read that the university hoped to pay the hotel by close of business on Friday, but I have not received confirmation either from the university or from the hotel in Prague, and probably won’t hear anything until Monday evening at the earliest.

Meanwhile, my students’ flight turned out to be arriving half an hour early, so I showered and then packed last night, so I could head out to the airport at 6:30 am this morning. Nine of the ten students arrived on the same flight and I met them all and escorted them back to the hostel.  It was much too early to check in, so they stored their luggage and I bought them breakfast. 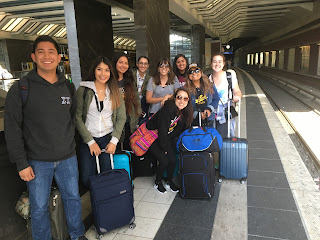 Later, I walked them to the nearest bank to take out money, and then to a foreign currency exchange for those who wanted that. Last, we headed to a drug store so they could stock up on all the toiletries they couldn’t bring in the carry-on baggage.

It was only 11 am, so we couldn’t go to the rooms, so I walked them down to the Spree River, 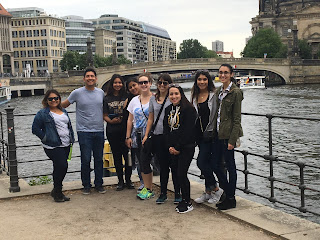 over Museum Insel, and to Unter den Linden.  My goal with the Ritter Sport Schokowelt store and it just started to rain as we got there.  I had a bite to eat in the café, and then we took the subway back to the hotel. 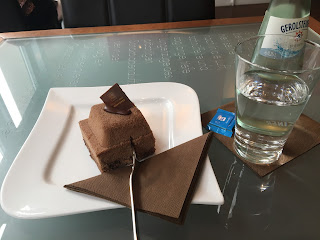 Thankfully, the rooms were ready so they all went up and settled in, while I worked on formatting my article for submission.  Around 3 pm, I received a text from the final student that she had barely made her connecting flight in Düsseldorf, so I headed out to Tegel Airport to pick her up. 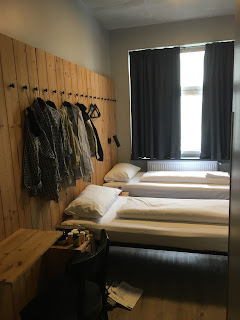 I have the same room that I had four years ago.

After getting her settled, I headed over to I Due Forni to make reservations for dinner and check out the logistics of getting the students there and back. I covered the students’ food and also bought two liter bottles of water for the table (one still, one sparkling).  The students were responsible for any other drinks they ordered. 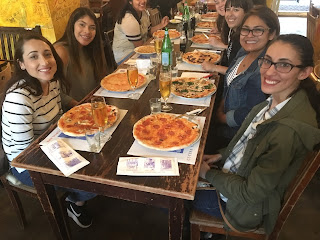 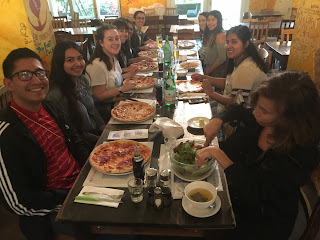 Everyone seems to have enjoyed the meal and so I escorted them back to the hostel so they could finally sleep.  The weather hasn’t been all that cooperative and it looks like intermittent rain for the next several days, much of which we’ll be spending outside.  Hopefully, everyone will bring their umbrellas and by Monday, I hope to have my Prague hotel confirmed.