Today was basically Oskar Schindler day for us in Krakow:  Schindler's factory in the morning; the ghetto at lunch; and Płaszow Concentration Camp in the afternoon.  If the meat of the day was Schindler, the sauce was provided by one student who seems to have had one too many adventures last night.

I knew he had wanted to go out to find a hipster bar and was relieved when his roommate told me over breakfast that he had returned to the hotel.  What I didn't realize was his condition.  He actually didn't remember coming back last night.  The problem seems to be that he decided to try absinth, and having (he was told) drunk it wrong the first time, he had to have the second one correctly (it was only polite, he explained).

When we got to the tram stop he realized he had forgotten something and he took off running.  He came back five minutes later when he discovered his roommate had his room key.  He came back just in time to get the tram, which is when I found out that his 3-day bus pass apparently disappeared with his memory. 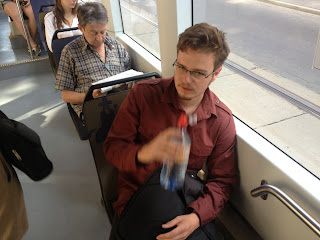 According to the desk clerk, he came home last night under his own steam, but that it took him a few attempts to get up the stairs to his room.

He was downing lots of water on the train and then picked up a big ice tea when we got to the factory.  I wanted to arrive early since buses often pull up, and the student ended up on the ground looking absolutely miserable. 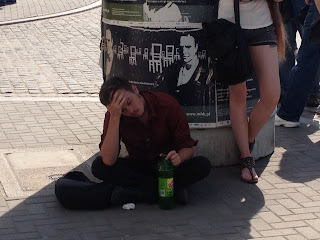 I've decided to cut him off.  Since his bank card was eaten by the ATM a few days ago, I'm the source of his funds, and I told him this evening that he must have a drinking buddy when he goes out.

Luckily, the worst of it passed in the morning and we had some very good conversations about bystanders and responsibility during the Holocaust as we went through.

The Schindler factory is now a large interactive museum, with areas made to look like Krakow at various stages of before, during, and after the war, along with visual images and sound effects.  Most of the students liked it, so some felt overwhelmed by the shear volume of the texts.  Up on the top floor in Schindler's office. 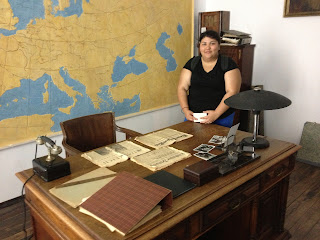 One of the students asked about a painting in his office (not the map, but the one in the upper right corner of the photo).  It showed a naked woman lying in a bed and some students wanted to know if that was original.  I asked the room attendant but as today was only her second day on the job she didn't know.  I saw a Polish guide leading a group of German gymnasium students and so I approached her.

I forgot the word for painting so had to adapt:

Me:  Is this piece of art original?

Me:  Was it here when Schindler worked here?

Guide: [almost offended to be speaking to me]: "Yes!"

Afterwards I wondered if she felt I was trying to steal something from her by answering my questions when I hadn't paid her to be my guide.

The museum ends with a room with an art installation called "choices" and two books listing the kinds of choices people had: 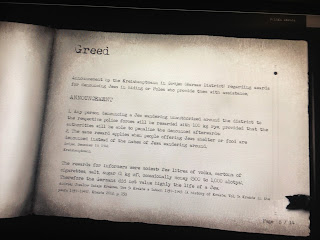 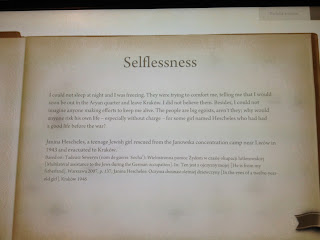 When we left the factory, we stopped at a local grocery for more water (and ice cream for some) and I noticed the wall graffiti.  Some of it, like this, appeared to be anti-Semitic: 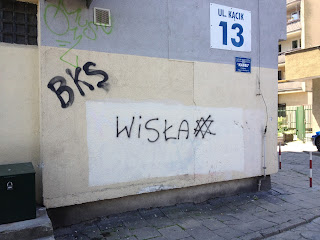 We had also seen elsewhere a Jewish star with a line through it like this, but with an A on one side and a J on the other.  When we visited the pharmacy exhibit we found out what they mean.

Thankfully, there was also some fun wall art that wasn't anti-Jewish: 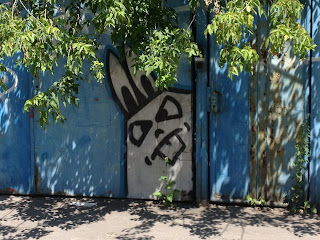 Before we went to lunch, I wanted to finish up with two fragments of the Krakow ghetto wall.  The wall had been constructed to look like tombstones.  In 2007, when I visited this first fragment, someone in the apartment courtyard behind it through something over the wall at me.  I asked the students to keep their voices down. 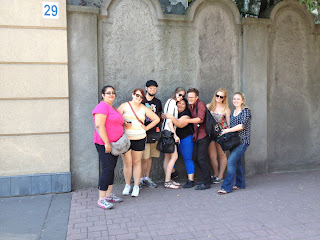 The second fragment is adjacent to a playground.  One student asked what the children who were playing there now will think when they grow up and remember where they played. 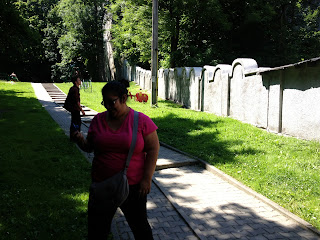 For lunch, we visited a small diner-type restaurant we ate at two years ago.  It's just off the main square in the Podgorze neighborhood.  You place your order and pay and then they bring it to your table. 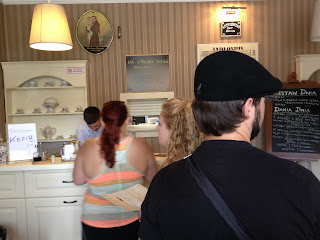 After my main course, I decided to order the strawberry pierogies for dessert and share them with any student who wanted.  The strawberries were fresh, with one large strawberry per pierogi.  I loved them. 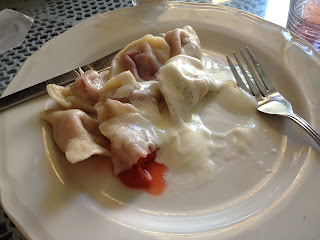 When we finished we walked across the street to the Pharmacy Under the Eagle.  This pharmacy stood in the ghetto and the Polish pharmacist and his three assistants refused to leave when the ghetto was created.  From their position on the ghetto square, they not only witnessed what was happening in the ghetto, but also were able to provide help to the Jews in secret.

Most of the pharmacy is restored to look like a pharmacy from the war years, but there are also lots of interactive displays. 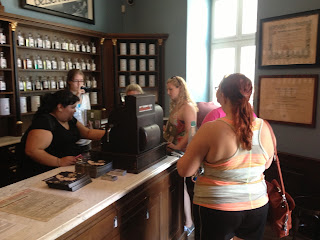 One installation in the back also discussed anti-Semitic graffiti in Poland.  Here's the explanation for what we saw on the building: 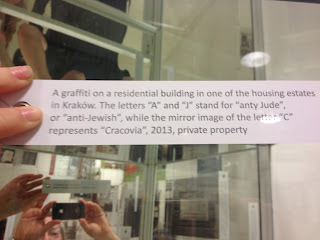 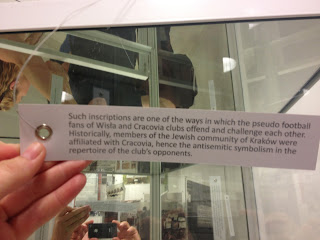 Our last stop for the day was the ruins of the Płaszow camp (made famous by the movie Schindler's List).  Virtually the entire camp was destroyed before Soviet forces liberated Krakow in January 1945.  The only buildings left were the Grey House 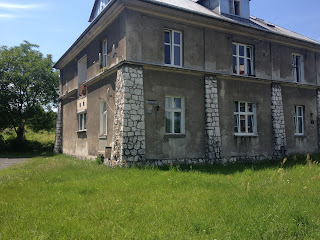 used by the SS to hold and torture prisoners.  And the Red House, 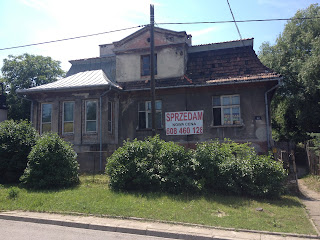 where camp commandant Amon Goeth and his subordinates lived.  It was for sale two years ago and appears to be still for sale today.

From there we braved the heat to walk to the cluster of memorials at the top of the hill, including this brand new one that I still need to translate. I can tell it concerns members of the Home Army resistance, but beyond that, I don't know. 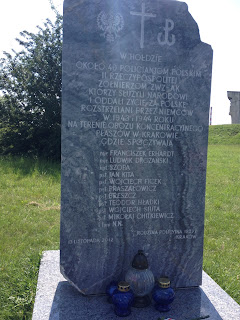 Before we went back to the hotel, I stopped off to pay off the remainder of the balance on our bus rental for Friday.  The original plan was to visit Auschwitz tomorrow and then have Friday as a free day, but in order to make the arrangements work, I had to reverse it.  As a result, we are having a pre-emptive mental health day tomorrow and then going to Auschwitz-Birkenau on Friday.

I made reservations for our farewell dinner on Saturday night at Szara Kazimierz. 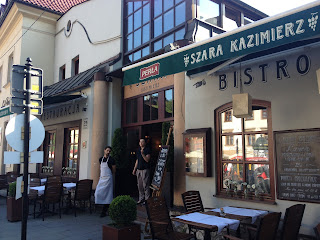 Because of mosquitoes in the evening, they recommended we skip the back garden for the inside, and I agreed.

Then I went to the bus station to pick up info on the buses to Zakopane in the morning and figure out what time we needed to leave.

When I got back the students were waiting to go to dinner. I was going to suggest something light nearby, but they wanted heavy and in the Rynek.  We went to Wesele, a Michelin Guide recommended restaurant (we ate here two years ago too).

With the hot sun still pounding down at 6:30, we went inside. 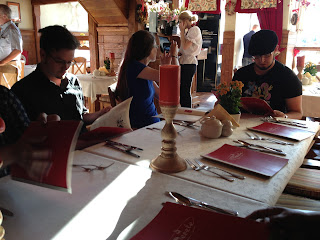 The goose here is excellent so I ordered goose breast with pear and cranberry sauce over small tart apples.  The late afternoon sun cast weird shades, but here it is: 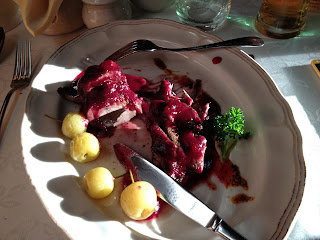 I saw the vanilla ice cream sundaes with strawberry syrup from a distance and decided to get one.  I'm glad I did. 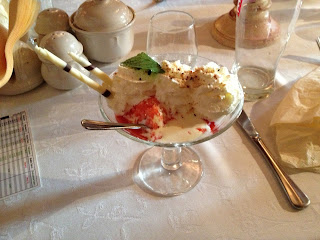 Afterwards we walked around the Rynek Głowny and enjoyed the early evening coolness. 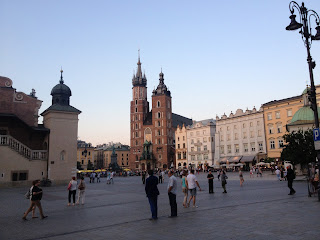