Hiking in the Pieniny Mountains (updated with video)

I slept very well last night and had a very nice breakfast in the hotel restaurant and caught the bus for Krościenko nad Dunajcem to start my hike through the Pieniny National Park.  I toyed with the idea of making for the raft put in place, but with the morning forecast for thunder storms throughout most of Poland, I decided to play it safe.

Fully stocked up with water, two chocolate croissants, and an apple, I set out on a set of trails that would wend their way through the park, taking me to several spectacular overlooks and then end at Szczawnica, where the rafts come out.

I had no trouble finding the trail, but I was surprised at how steep it was at the beginning. 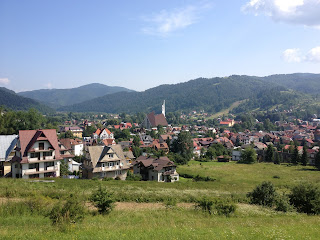 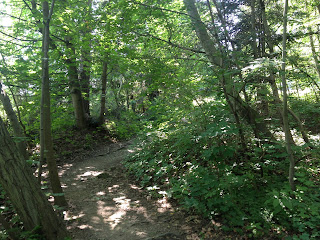 It seemed like it was just going straight up the mountain with the only variation being between woods and meadows. 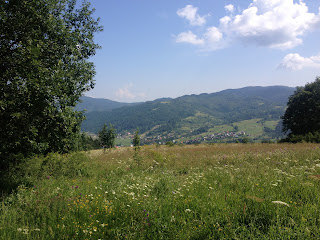 I was so glad I brought the extra water, because I sweated out the first liter in thirty minutes.

Finally after climbing for nearly an hour, I had ascended over 1000 feet over a distance of 1.25 miles.  From here I had an amazing view of the Dunajec Gorge.  I could make out the small little rafts floating by, way below me. 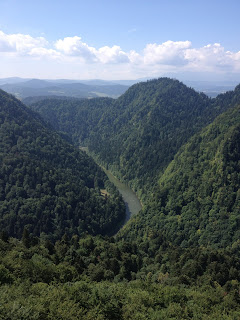 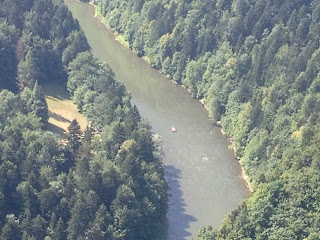 Here's the video I shot of the panorama:


The weather continued to be good: sunny, few clouds, and not so humid, with the occasional cool breeze.  I decided to try for Mt. Sokolica.  At first, I thought I missed the turn to it as I had to climb down a steep stone staircase and switchbacks.  After descending over 400 feet, I then had to reascend 325 more feet to the top of the mountain.

In Polish national parks they don’t tell you how far anything is, but rather how long it will take to get there. 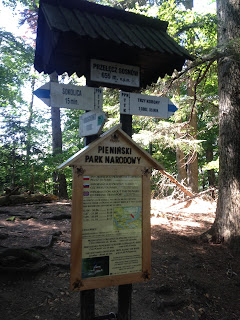 The last 10 minutes were straight up a stone staircase with a metal railing for support. 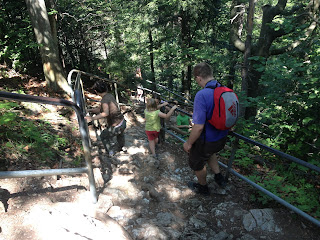 The ledge overlook was steep and narrow, with almost no comfortable places to sit or stand.  Still the view was amazing. 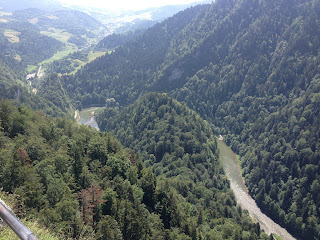 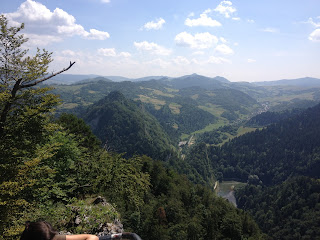 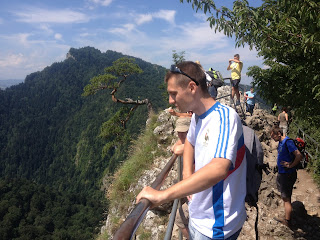 Here you can see on the rock outcrop on the right in the distance where I was standing when I enjoyed the first overlook. 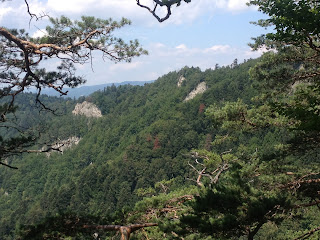 After enjoying the view and eating my apple and last croissant (and drinking another half liter of water), I began to make my way Szczawnica.  It was even steeper descending than it had been on the path I took up.  This time, though, they needed to add switchbacks and stairs.

After about a half hour I could see Szczawnica in the distance. 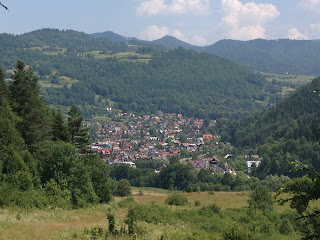 Finally I reached the river where the trail came to an end.  To continue I had to take the ferry across, so I sort of got a raft ride, though it was much shorter. 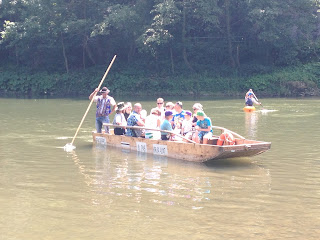 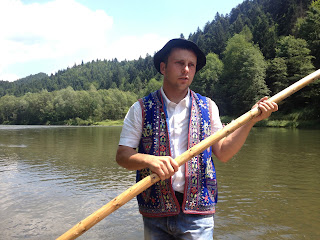 Even though the weather continued to be good through the afternoon, I don’t regret my choices.  Had I taken the path to the raft put in site I never would have seen the vistas I had on this trail.  I’ve been on the river but had never seen the Gorge from above.

My guidebook mentioned there’s a nice restaurant in Stary Sąnz:  Restauracja Marysieńka.  Located above the rynek, the book praised its friendly service and good food.  I ordered the żurek, a sour rye soup, and their special pierogi, made with forest mushrooms and served in a cream based mushroom sauce.  Although the combination resulted in a rather beige meal. 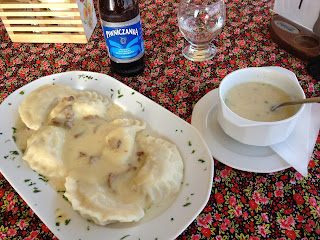 I really liked the pierogi (the żurek, on the other hand, was just ok).  My only problem with the restaurant was getting my waitress’ attention to pay.  On the plus side, it had a very nice view of the rynek. 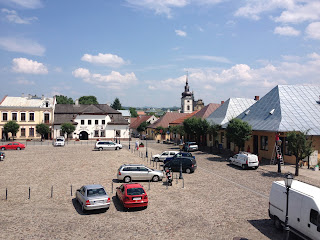 Afterwards, I walked over to the cloister and convent established by the local saint in the 13th century, but they were having mass so I walked back.  I tried to buy a new SIM card for my phone, but the girl at the store selling them couldn’t figure out which card, if any, would work, so I left and caught the bus back to Nowy Sąnz.  Now for some coffee and dessert as a treat for all the hard work.