A Rainy Day in Krynica

Despite forecasts of virtually nation-wide thunder storms yesterday, the day passed quietly.   The only dark cloud on the horizon was the complete failure of wifi in my hotel forcing me to visit the wifi-equipped cafe next door, not just once (for their joghurt torte and cappuccino), 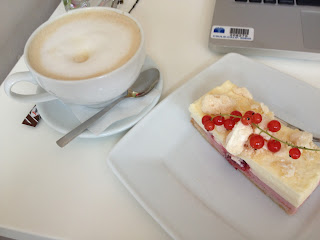 but twice (for their ice cream sundae with its bizarre combination of blueberry, coffee, and chocolate chip ice cream, along with whipped cream, strawberry syrup, and fresh red currants and blueberries). 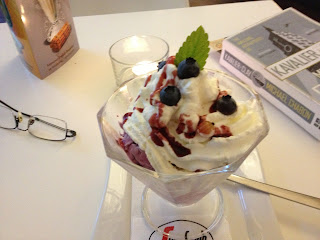 I had hoped that a good night's sleep might fix their wifi, but no, it was still out this morning.  No rain during the night, though at 2:00 am, the temperature approached the dew point and I woke up in sweat.  This morning, however, the sky was distinctly overcast and it looked like rain was in the offing.

In order to avoid getting rained on, I took an early bus to Krynica.  The storm clouds were gathering when we reached the town, and the question was whether I would find the hotel before the rains started.  Luckily I won that race (by about 5 minutes).  Here's the view from my hotel balcony this morning: 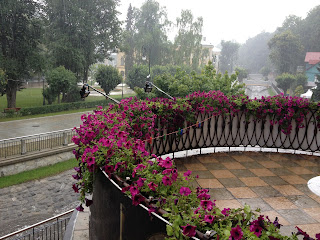 In fact, the rain kept up most of the day.  Here's the view from my hotel balcony this afternoon:


In the meantime, I did some laundry and went to lunch in the hotel restaurant, where I ordered the mushroom soup (excellent) and the fried sole (slightly fishy, but still very tasty). 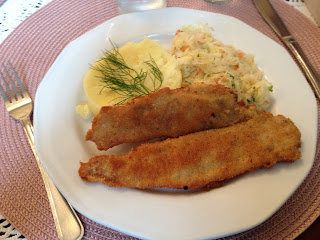 I'm staying at the Hotel Małopolanka, which is described in my guide book as "an old-fashioned, 20-room pension and spa dating from the 1930s that could almost be the setting for an Agatha Christie mystery." 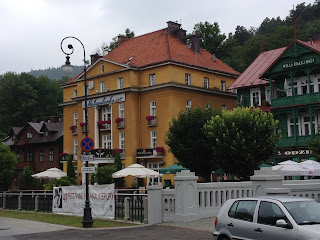 The hotel has a rather stolid look to it, in contrast to the nineteenth-century alpine-style villas surrounding it (like this one). 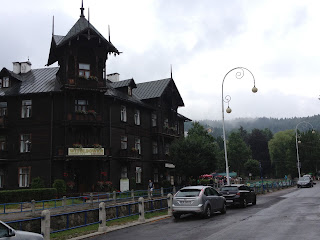 On the ground floor, there is a cafe and lobby.  I sat in the cafe this afternoon, drinking coffee and reading my novel.  This evening they have a live Polish band that's just butchering the English lyrics to famous songs by The Doors, Cat Stevens, and John Lennon. 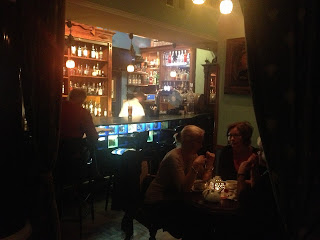 This ceramic stove is almost an antique. 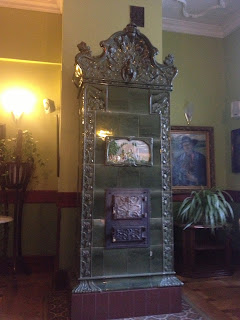 This section is opposite the cafe, but they come by every now and then and serve drinks and treats. 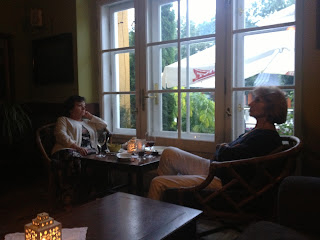 Krynica is Poland's largest and most famous spa town.  It has mineral water springs that people come to drink since the middle of the nineteenth century.  It has a little of the feel of Karlovy Vary (Carlsbad), though it is much smaller.  This is the original pumping station: 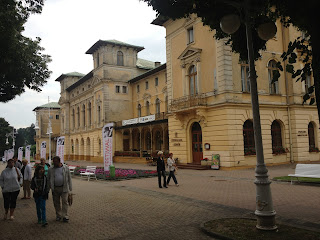 It has some lovely architectural details: 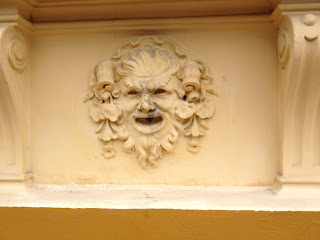 As in any European spa, the most important thing, after the treatments, is to take a stroll through the town (rain or shine): 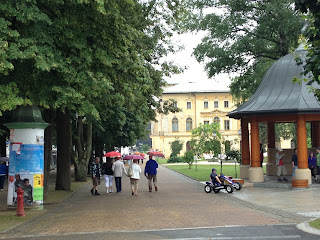 With not much to do outside, due to the rain, I decided to juggle my plans for the remainder of the trip by cutting out the town of Sanok (5 to 6 hours away by bus just to sit inside in rain was too much) and heading back to Krakow two days early.  I also signed up for a set of spa treatments in the hotel spa.

After finding an English-language list of treatments, I chose the Dead Sea mineral bath with lavender and "chromotherapy" (I had to look that up), followed by the hour-long full-body massage.  This is only the fourth time I've ever had a massage (the two previous times were in Karlovy Vary in the Czech Republic), so I was both curious and apprehensive about a Polish version.  I practiced pantomiming my ticklishness in my knees, but thankfully, the masseur spoke English.

The mineral bath was basically a large jacuzzi with colored lights (that's the "chromotherapy"); in my case, they prescribed turquoise blue.    It last 15 minutes and was very relaxing.  Now that I have my jacuzzi tub fixed at home, I think I'll pick up some Dead Sea bath salts for it.

The massage turned out to be the most comfortable and relaxing I've ever had.  My feet and calves benefited from the attention after all the strain I've been putting on them, and I think I nearly fell asleep three times before the session was over.  Altogether, with tip, it came to about 150 PLN, or $40.

When I got back to my room, I noticed it had stopped raining.  Anxious to maximize any break in the weather, I headed to the funicular at the north end of town.  This takes people up to the top of a tall mountain adjacent to Krynica. 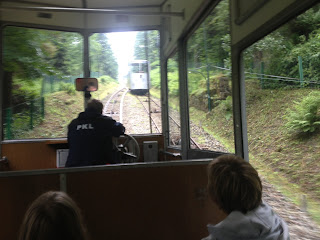 While there are very lovely views from the top, they aren't of the town.  You can only see a small bit of it. 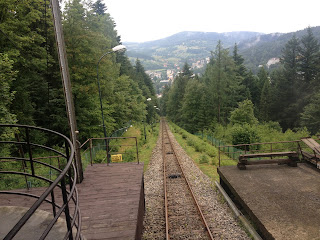 Instead, you can see the Beskid range, though they say on a clear day you can make out the Tatras in the distance.  Today wasn't clear, but the clouds made it nearly as dramatic 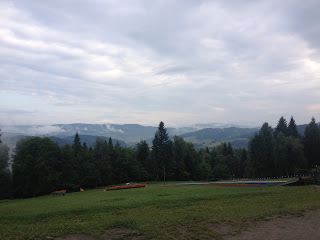 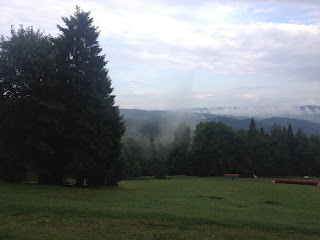 The funicular only runs until 7 pm, and I figured the trail back down would be muddy from the rain, so I made sure I left the top in time.  I went to a nearby restaurant recommended by my guide where I got my usual kotlet szabowy (aka schnitzel): 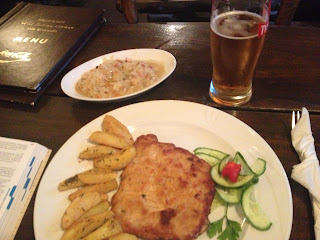 I decided to save dessert for the cafe in my hotel, so I came back to find the live band. I found an open seat in the lobby and ordered the Szarlotka with whipped cream and vanilla ice cream, along with a cappuccino and listened while they mangled the lyrics to song after song (I mean, how hard is it to learn the lyrics to John Lennon's Imagine?). 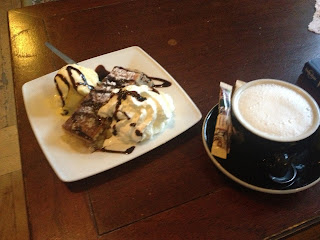 Tomorrow, if the weather clears or at least doesn't pour, I will try to take the cable car out of town and then hike back.  If not, it looks like another stress-filled day of coffee, cake, reading, and massages.