Even with the sheer curtains I managed to sleep a full eight hours last night, which I chalk up to the twin effects of 1) resolving the credit card crisis; and 2) drinking half a liter of cherry-syrup infused beer.  I packed up, ate breakfast, and headed out for my 8:45 am bus to Nowy Sącz.

Since I first came to Poland in 2006, it’s clear that the Poles have significantly improved their transportation network.  Much of the road, for example, between Krakow and Nowy Targ is now two lanes in each direction.  That being said, there’s still work that needs to be done.  Most intercity roads in Poland remain one lane in each direction, which means that traffic ends up moving at the pace of the slowest truck, or tractor.  As a result, some drivers get frustrated and try to pass when they shouldn’t leading to accidents.  We passed three today on the road to Nowy Sącz.

I was curious to visit this place for two reasons.  First, my grandmother’s father was born here and I wanted to see the town.  Second, it seemed like a good jumping off point for exploring this region.

The town is rather nice.  It has a large, beautiful rynek, 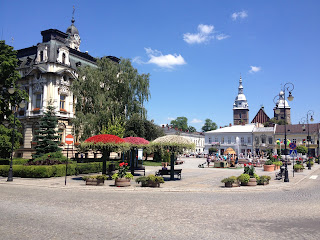 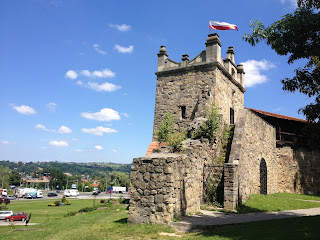 and some buildings that looked like they could have come from Vienna (which isn’t all that surprising since up until 1918, this town and all of Galicia were part of the Austro-Hungarian Empire).

On the bus from the station we passed the market square and I couldn’t believe my good fortune:  I had arrived in  Nowy Sącz on market day (at least I think it’s market day; I’ll know for sure tomorrow).  This makes Nowy Sącz the classic shtetl.  Most people think that a shtetl is a small village, but, in fact, it refers to a “market town,” that is a town that hosts the regional weekly market.

I’m staying at a rather nice hotel that overlooks the Dunajec river (though my room looks out towards the rynek).  On the plus side, it has thick, dark curtains so I won’t be woken up (I hope) at 5 am by the rising sun.  It also has a large comfortable bed, a very nice bathroom with a heating rod for drying towels (or wet, cleaned laundry), and a tv with CNN and music channels.  On the downside, despite giving me a router, I was unable to get internet in the room.  There is internet in the lobby and in the café, so to post this I’m going to camp out later by the restaurant. 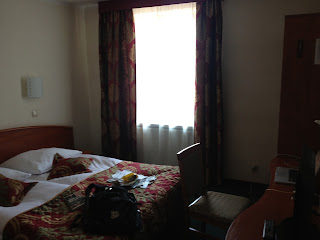 After lunch I head out to walk through the town and visit the market.  I love markets of all kinds.  This one struck me as somewhat on the small side, about half of what the weekly market in Nowy Targ was like when I went there in 2006. 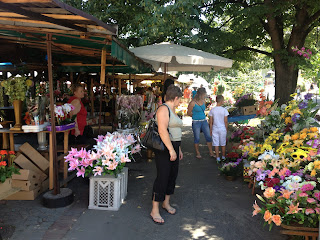 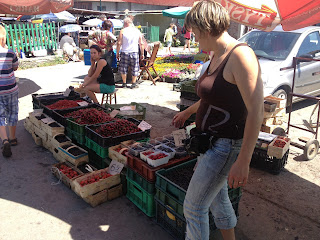 I’m always struck by the women selling vegetables and herbs in the market square, since that’s how my great grandmother earned her living. 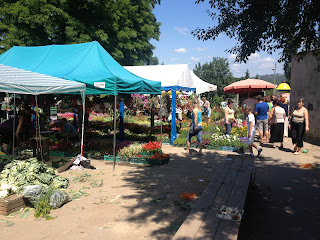 According to my guidebook, there’s a nicely preserved synagogue here, but I walked past it at first because it is having an exhibition of Christian art.  It’s closed on Mondays and Tuesdays, so perhaps I will be able to visit it tomorrow. 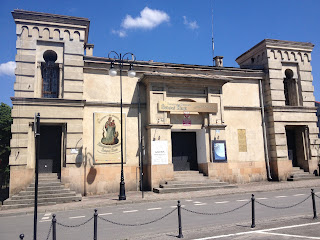 I made my way across the river 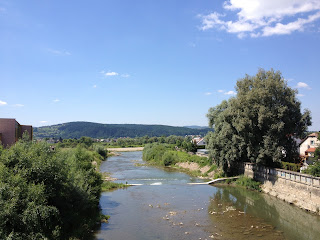 to the Jewish cemetery.  From the signs I learned that the last Jew in Sanz (the Yiddish name for Nowy Sącz) passed away and that they are trying to raise money to preserve the cemetery. 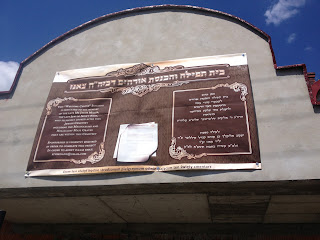 The woman across the street from the entrance has the key, but the place looked so overgrown, I didn’t bother to ask for it. 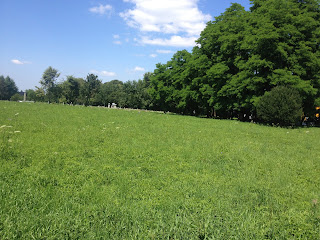 I was also struck by the signs indicating that part of the cemetery is now under the street and sidewalk.  Apparently, the city at some point in the past had built on top of it. 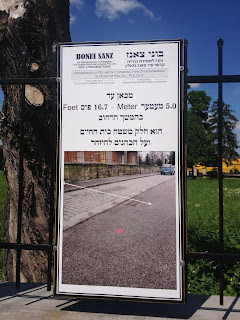 After all the walking, I needed a break, so I stopped into the café near the hotel to figure out what I am going to do tomorrow and to catch up on my novel.

My initial plan is to take the morning bus to Krościenko and then hike through the Peniny National Park for 3 hours to get to the place where the rafts put into the Dunajec river.  I could then ride them to the town of Szczawnica and from there catch a bus back to Nowy Sącz.  When I checked out the weather for tomorrow, however, it says there are thunderstorms predicted.  That would not be fun to be hiking or rafting in the kind of downpour and lightening storm we had last Friday.  I’ve decided to play it by ear and check out the weather in the morning.

Meanwhile the weather here cooled off a little bit, so I strolled down to see the panorama of the Dunajec river for which the hotel gets its name.

I couldn’t help but think as I walked through this rather quiet but lovely little town what might have been had my great grandfather not left in 1900 to come to America.  In 1939, about a third of the town was Jewish (25,000 out of 75,000), which was typical for market towns in Poland.  Virtually the entire Jewish population was murdered in 1942 in the Bełźec Extermination Camp.

That's the story of Polish Jews in the 20th century:  those that left, either for America or Palestine, survived, and those who stayed (at least 90% of them) were murdered. And walking around the town, one could see why people might have been tempted to stay.  It's a pretty town, in a pretty river valley, surrounded by beautiful green rolling hills, with several lovely mountain ranges nearby.  There are pleasant parks, a peaceful town square, and lots of cafes.  A far nicer place to live, it would seem, than the tenements of the Lower East Side of New York or the muggy, mosquito-filled swamps of Palestine.  Yet, only those who left lived.

Because the Nazi persecution began first in Germany, and then Austria, many Jews fled Europe.  The result is that more German and Austrian Jews survived the Holocaust than Polish Jews, even though the Polish community was nearly six times larger.  Once the Nazis invaded, they prohibited Polish Jews from emigrating in order that they not take away spots for German and Austrian Jews (who they had been trying to get to leave since 1933.