With no scheduled excursions for this morning or much of today, we were able to sleep in.  I didn’t get up until 7:30, over eight hours after I went to sleep.  A real achievement.  We watched a little of the news this morning, watching in disbelief as Trump stepped all over his story to attack Ted Cruz’s father.  I’m still in shock that he’s the Republican nominee.

Over breakfast at the lodge, dad and I discussed politics.  How will Roger Ailes resignation affect the presidential race?  (Dad is sure Fox News’ coverage may shift dramatically; I’m not so sure the change will be that quick).  What will Trump do next week during the Democratic Convention? (I’m convinced he will try to make himself the lead news story each day).  Who will Clinton pick as her Vice Presidential candidate (Dad hoped for Elizabeth Warren, I told him that the Democrats wouldn’t want to lose a Senate seat and was hoping for Julian Castro).

After breakfast we took the shuttle to the Denali National Park visitor’s center.   A lot of the people on the bus wanted to see the sled dog demonstration, which they were late for, but I wanted to find out when the ranger-led hikes were.  Dad, though, asked if we could go see the sled dogs, so off we went.

We had an opportunity to see almost all the dogs.  Some were in areas where you could pet them, others were not supposed to be bothered.  I did my best to pose with some of the more accessible dogs. 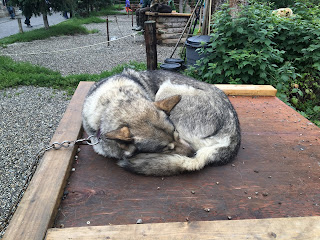 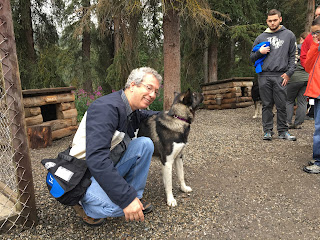 The park ranger had a bit of shtick going about being a federal employee, but it wasn’t too offensive.  Eventually, we all sat behind the railing to see the sled demonstration.  As they start setting up the sled and harnesses, all the dogs get up on their boxes and bark repeatedly, saying (in doggish) “pick me! Pick me!” 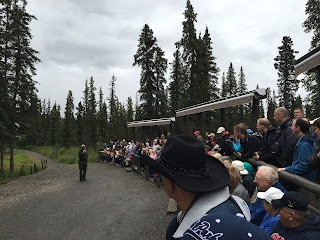 They bring the dogs out in an odd way:  each dog is brought out only on their back paws.  I asked the ranger and he called it “two paw drive.”  The problem is that if they walk on all four legs, they are so powerful, they can pull the handler off balance. 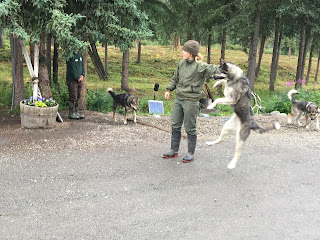 As they put the dogs in position, they start straining and leaping, trying to pull the sled.  Eventually, the musher releases the break and off they go.  In no time at all they turn the loop and stop, after which, all the dogs gets treats and rubs.

Afterwards, we walked around and petted the dogs some more. 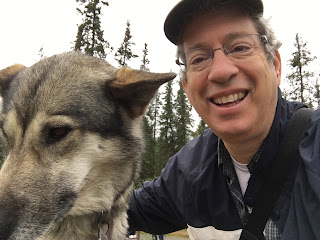 Then we headed back to the visitor’s center.  I learned there would be a ranger-led hike on the Rock Creek Trail at 1 pm, so in the meantime, we watched the 18-minute movie about the park.  The mountain itself looks beautiful, but if you want to see it cloud free, your best bet is to come in January when the temperature is 40 below.  Those are the days when the sky is the clearest.

My dad decided to go back to the hotel to rest, so I walked him back to the bus and made sure he got on the right one.  Then I had lunch at the cafeteria in the park.  I had such a big lunch, I just couldn’t order a sandwich or hamburger, so I asked for the salmon chowder, which turned out to be really good on such a cold day.

I should mention that the weather today has been much better than yesterday: not sunny (though I have glimpsed patches of blue on rare occasions today), but much less rain, only periods of light drizzle.

About two dozen people showed up for the hike.  It was 2.5 miles with 400 feet of elevation gain (and then loss).  The pace was a very leisurely 1 mile an hour.  The people on the trail were an eclectic bunch:  a Spanish-speaking family with a toddler, two German friends from Bonn, about six people from a Dragoman Adventure tour group camping in the park (they were from all over the world), and some Chinese girls. 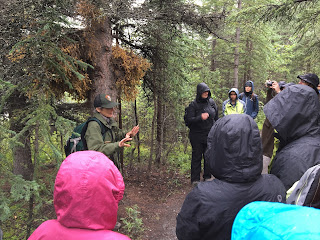 Our guide delighted in pointing out the various berries along the trail.  She encouraged us to try the blueberries, which are a week or two away from full ripeness.  “Just avoid any green ones,” she advised. 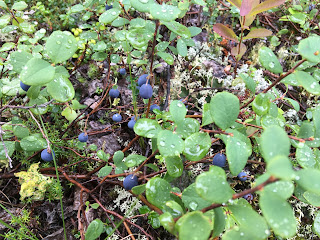 There were also low-growing cranberries.  These are about a month away from ripeness, but I tried one that looked like it was fully ripe.  It didn’t taste tart; in fact, it didn’t really taste like anything at all.  If I hadn’t known it was a cranberry, I never would have guessed.  At best, I’d say it had vague hints of cranberry. 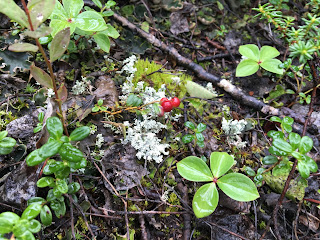