Finally, a Sunny Day in Alaska

The day started off as overcast as every other day so far: low clouds and light drizzle. 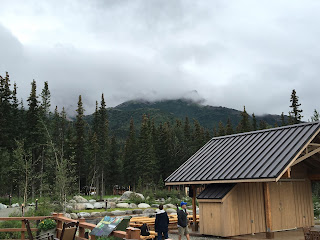 Dad was feeling sore and took a pain pill.  Instead of walking to the square for breakfast and our transfer, dad wanted to take the shuttle.  To understand what happened next, you need to know there are two types of shuttles that run among all the buildings at the hotel complex:  a large, comfortable van; and a school bus.  Since the van only seats about 15 and won’t permit standing, the school bus comes in handy when there are large groups.  This morning, we were picked up by the school bus.

Before we could get off at the square, we had to stop at the main lodge lobby.  However, because of the size of the bus, it can’t make the sharp turn into the parking lot of the lobby.  Instead, it has to exit the lot and then reenter further down, where it can simply make a left to the front of the lobby.  The bus was about a third full when we were picked up and there some women, probably mid-60s, sitting behind me, and one was talking about how her children keep calling her.  As we came up to the main lobby, the bus stayed to the right to make its exit and re-entrance. Suddenly, the women behind me were screaming “let us off!  Can’t you let us off here!  We want to get off!”

The bus driver yelled back that she needed to exit to make the turn and I think I yelled back the same.  The women were furious, sure that the bus driver was talking smack about them, and later I realized that they thought I had yelled at them.  I could here one say, “I’m going to get her name and report her,” followed by, “is she talking to us?”  The driver was carrying on a conversation with the people in the front so I said that’s what she was doing.

As they got off the bus, they asked the driver her name.  I really didn’t pay any attention to them, and the bus headed down to the square where dad and I got off and had a so-so breakfast at the buffet.  We needed to be next door at 8:30 to get on the bus to the train station, so this was a lot more convenient than going back to the restaurant in the main lobby where we had eaten the last few days.

Eventually they announced we could board the buses, so dad and I got in line, but that bus filled up, so we moved to the overflow bus.  I think dad was still hurting because he asked if they would bring the bus to us, rather than walk across the street.  Nonetheless, we walked and got on.  At the train station, we ran into our old friends Sam and Mary (from Wisconsin), who had seats on the train just behind us and across the aisle.  I asked dad if he “had seen the farbissiner women who had complained on the shuttle bus, and I was shocked to hear “we’re over here!”  They were 6 or 7 people behind us in line to board our train wagon.  She accused me of yelling at her on the bus, and I said that “I just don’t have an indoor voice.”  Dad then said to me, “when you’re in a hole, stop digging.”

I was more than a little surprised since I hadn’t seen them on any of our other excursions or on the bus from Fairbanks.  When we reached Anchorage, they were part of the first rows of the train who were directed to a different transfer bus than ours.  I’m not sure if they will be on our ship or not.  I guess we’ll find out tomorrow if they’re on the boat train to Seward.  If they’re seated at our table, it will be more than a little awkward. 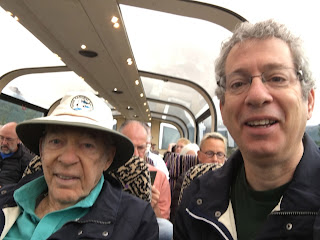 Our seats on the train to Anchorage

The train journey to Anchorage was absolutely stunning.  I would rank it as one of the most spectacular train journeys I’ve ever taken.  Even better, as the day progressed, the clouds began to lighten, and suddenly this strange hot burning ball of fire in the sky became visible.

The early part of the route went along side the Nenana River, with gorgeous views of dark green forests, occasionally broken up by a churning river or small green meadows with black ponds. 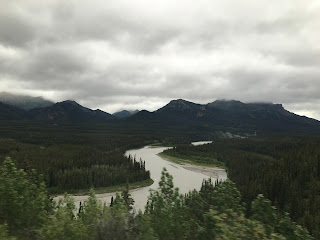 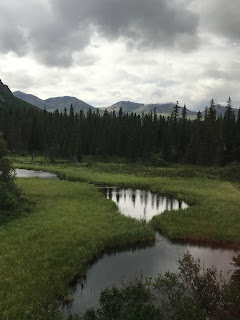 As the clouds began to diminish, we began to see the tops of mountains that had been mostly invisible before, such as Panorama Mountain. 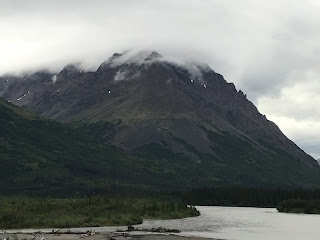 Then as the sun came out, we could see hills covered by light green tundra, with almost no trees at all (which can’t grow in heavy permafrost. 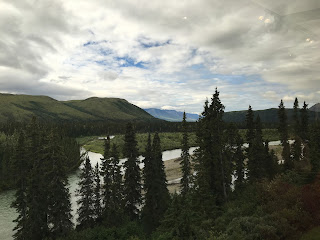 Trees on one side, tundra on the other 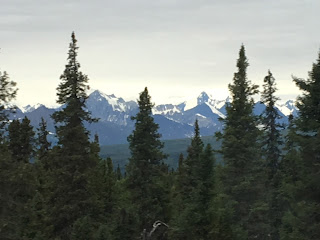 The trip was enjoyable for the company.  We went to the dining car at lunch and shared a table with the couple in front of us, a semi-retired store owner from Missouri and his wife.  He had never left the United States before, but his wife, daughter, and mother-in-law had recently done a Mediterranean cruise, which began in Istanbul, ended in Rome, with stops in Ephesus, Israel, and Malta.

Eventually we reached Wasilla where, we learned from our guide, Governor Palin never said she could see Russia from her porch, but rather that “We (in Alaska) can see Russia.”  Earlier, I heard her chatting with someone behind me about how her daughter and Palin’s daughter are friends (they live near by), but that many people in Alaska were upset that she had broken her promises and quit her job, rather than fight the oil companies.

South of Wasilla, we approached the Chugach Mountains, which were quite dramatic.  Someone joked we should tell people that this was Mt. Denali.  Eventually, after eight hours, we came around the bend and were in downtown Anchorage. 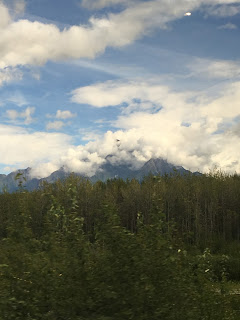 Our hotel, the Westmark, seemed drab and dingy on arrival.  Dad was surprised at the niceness of the room given how shabby the reception is.  Dad wanted salmon for dinner, so I browsed Yelp and we ended up going to Orso, across the street.  Dad had the sockeye salmon on red quinoa, I had the king salmon with grilled veggies.  Dad was very happy with his and I liked mine too, but after tasting his sockeye, I think I prefer that to king salmon. 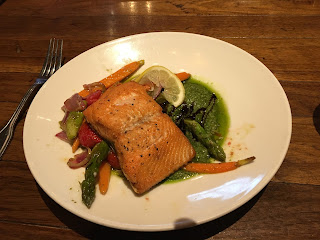 Dad wanted ice cream for dessert, so I found a parlor four blocks away.  From there we took a short detour on the way back to the hotel so I could see if the Starbucks sold newspapers (unfortunately they didn’t).  On the way back to the hotel, I could see dad was limping a little and after I asked, he said his hip was hurting him.  Luckily, we were only a block and a half from the hotel.

After finding out logistics for our transfer tomorrow, I sent him to the room while I took a stroll down to the harbor.  Dad was a little concerned for my safety, but I told him I would be back well before sunset (which isn’t until 10:59 pm here).  The Cook Inlet is only four blocks away, so I walked down there.  It was the first time since I arrived in Canada that 1) I needed sunglasses; and 2) I wished I had not taken my jacket with me.

It was strange because the view of the mountains lining the Cook Inlet remind me a lot of the scenery I saw in Ushuia on the south shore of Tierra del Fuego, but despite the coldness of the view, everyone was out in t-shirts and shorts.  The walk turned out to be quite short, just a half an hour, and then it was back to the room. 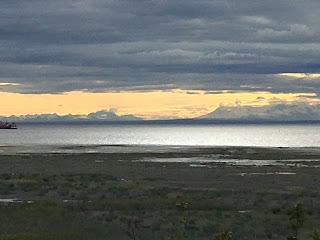