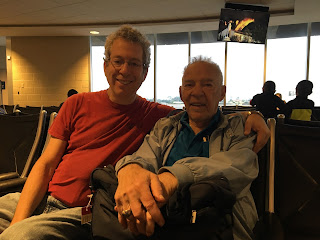 As we entered the plane to sit down, I was surprised to see people already in my row.  I immediately saw why:  a large mother with two small children.  The child by the window was about four years old; the one sitting on her mother’s lap in the middle seat was a few months’ older than one.  “You’re joining my family,” she said as I sat down and groaned.  The mother told the toddler it was time to go to bed and she began to scream.  And scream, and scream, and scream.  The mother tried to hold her on her lap and as she squirmed, she repeatedly hit her head on the back of the chair, which then caused her to scream even louder.  The screaming lasted over 20 minutes.

The toddler fell asleep just before the plane took off, and remained asleep for a while.  When she woke up, she didn’t scream any more, but she did try to grab things off my tray table.  It was a long flight.

I was happy to get off the plane.  The Holland America people met us at the airport and everything went quite smoothly.  I picked up our welcome pack with keys and luggage tags and we got on the bus with other people attending our cruise and others.

The hotel is fine.  The room is large and clean. 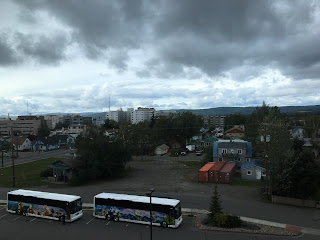 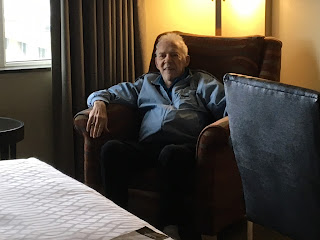 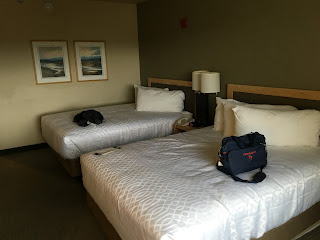 Most, if not all, of the guests are on either a Holland America or Pacific Princess cruise. Dad wanted salmon for dinner, but we had trouble finding a place that had fresh salmon.  One place that was supposed to be good was a 30 minute drive.  Another place specialized in chowders and sandwiches.  We ended up eating in the hotel restaurant.  Unfortunately, the salmon was salmon tandoori, so we both got the surf and turf:  5 oz top sirloin, bairdi crab legs, and prawns. 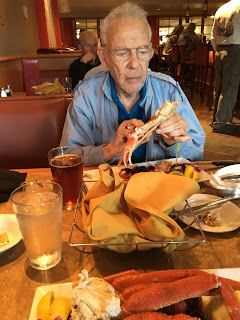 Dad wasn’t thrilled with the prawns.  He felt they were really just small shrimp.  I enjoyed the meal, but I think crab legs are pretty close to being more trouble than they’re worth:  so much work for so little meat.

We’re now watching the wrap up of today’s convention and we’ll be waking up at 6:30 am before we get on the bus to take a steamship cruise.