A Peak Into Syria

Yesterday's wonderful day off in Akko is just a memory. I woke up bright and early at 6 am to finish packing up. Our first meeting was at 8:30 am with Mr. Jafar Farah, the director of Mossawa - Advocacy Center for Arab Citizens in Israel; and Ms. Salima Mustafa-Suleiman, from the Authority for the Economic Development of the Arab, Druze, and Circassian Sectors. I was particularly interested in the speaker from Mossawa, since I had promoted that organization as an internship possibility for our students studying Arabic at the University of Haifa. 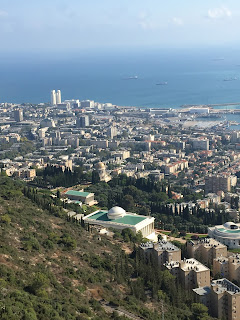 Mr. Farah's talk focused on how Israeli Palestinians are a bridge: they are part of the Palestinian people but also citizens of the State of Israel. He spoke about the internal crises facing Israeli Palestinians and the need to for greater democracy and equality in Israel. In particular, he stressed the disabilities of the legal system that placed the Jewish community of Israel above others, the lack of support for Arab culture in Israeli media, and the policies regarding land allocation.

Ms. Suleiman's talk focused on the recent Five Year Plan which will revolutionize the treatment of the Arab Sector in Israel. The idea is that each ministry will now allocate resources more equitably among sectors and more emphasis will be placed on increasing employment in the Arab Sector. The involves creating new job centers, devoting more resources to industrialization in the Arab Sector, providing public transportation (which historically has bypassed almost all Arab towns in Israel, with the exception of Nazareth), providing day care centers, and more policing.

After that we drove from Haifa to Daliyat al-Carmel, the largest Druze city in Israel (the Druze are a secretive religion with roots in Shi'a Islam).   Two things struck me as we drove through these two Druze towns:  how few signs we saw in Arabic and the preference for large family houses rather than apartment blocks. 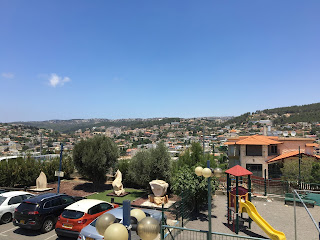 There, we met with Mr. Majallie Wahaba, a former member of Knesset and Deputy Minister of Foreign Affairs; and Dr. Yusri Khaizran, from the Van Leer Institute in Jerusalem. Right off the bat, we learned Mr. Wahaba was, for about 2-3 weeks, the first non-Jewish president of Israel. This was when President Katsav was sent to prison. Normally, the title would temporarily pass to the Speaker of the Knesset, but she was traveling in the United States. As Deputy Speaker, he was next in the line of succession. 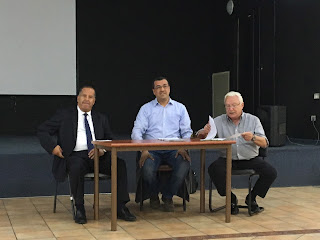 Mr. Wahaba, who had served in both the Likud and Kadima parties, emphasized how the Druze chose to ally themselves with Israeli Jews, serving in the IDF, and representing the interests of the Druze community outside of Israel to the Israeli government.

By contrast, Dr. Khaizran argued that Israel had encouraged the development of what he called "false consciousness" among the Druze, to identify as Druze and not Arab. Prior to 1948, Druze were treated as Muslim Arabs (albeit heretical ones). Israel had confiscated Druze land and tried to cut the Druze off from the wider Arab society.  70% of houses in Daliyat al-Carmel are "illegal" (that is, built without a permit).  The only place Druze were equal, he argued, was in the IDF. The civil administration, on the other hand, discriminates against Druze. "We have been loyal for 60 years," he said, "it's time for the state to be loyal to us."

I asked them about the connections among the Druze in Israel, Golan, Lebanon, and Syria, but while they both were willing to talk about how Druze in Israel have extensive social, religious, and economic ties with Druze outside Israel, neither addressed my question of how these other communities (who constitute the overwhelming majority of Druze) view their Israeli members.
Since Dr. Khaizran kept emphasizing how Arab the Druze are, I was struck by his avoidance of the word Palestinian and so I asked if he views himself as Palestinian, and he said "no." Palestinian identity, he said, had begun to take on an Islamic element as early as 1929, and already by 1948, Druze were distant from that identity. He considered himself Arab, not Palestinian.

Afterwards I asked him about language. I noticed on our drive through Daliyat al-Carmel how few signs in Arabic we saw; most were in Hebrew. That's the result of army service, he said. Most young Druze mix Hebrew words into every sentence of their Arabic.

We got back on the bus and headed off into the Galilee. They provided us box lunches to eat along the way and we reached the Mt. of the Beatitudes early. It was oppressively hot; 95 degrees Fahrenheit. There was a strong wind, but it was a hot one. 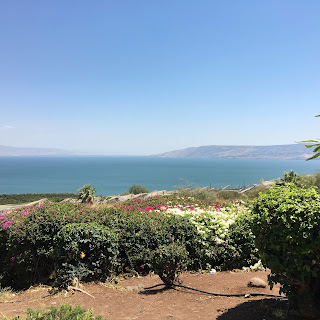 The view from the Mount of Beatitudes 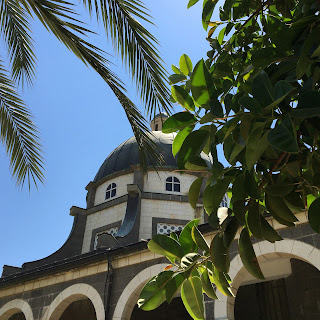 The church was funded, and originally dedicated to, Mussolini. 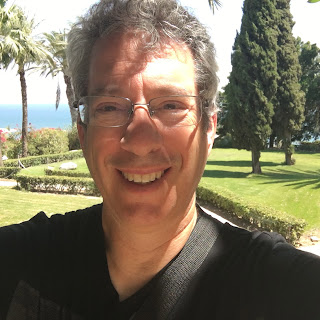 Trying to smile in the stifling heat and humidity.

We voted to skip Capernaum in favor of Tabgha, where we could stick our feet in the Sea of Galilee. 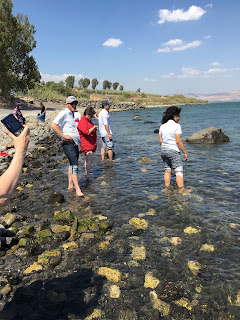 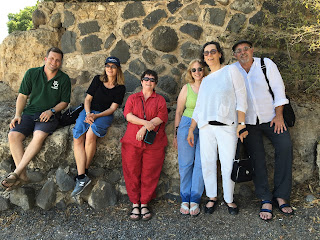 This is at Tabgha.

You might think this was the end of the day, but no, we had one major session left before heading to Tel-Aviv. We left the Sea of Galilee, crossed the Jordan River (a small little creek) and climbed eastward into the Golan Heights toward the Syrian border. At the top of Mount Bental, we met Brigadier General (res.) Nitzan Nuriel who gave us a security briefing. 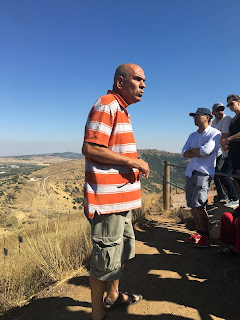 His credentials are quite impressive: Director of the Counter-Terrorism Board for the Prime Minister from 2007 to 2012, long time military attaché to the Israeli Embassy in Washington D.C. where he acted as the official liaison between Israel and the U.S. Army, the Marine Corps, Special Forces, and Homeland Security. Before that he was Deputy Division Commander of the Golani Brigade. He oversaw Israel's withdrawal from South Lebanon. 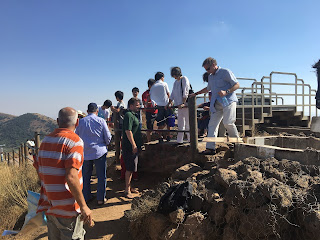 Getting ready to hear the talk.

Mount Bental, where we stood, is a tall volcanic cone with commanding views of the Golan, Mt. Hermon to the north, and Syria to the east. He began by pointing out the border with Syria and explaining that since the beginning of the Syrian civil war, the northern part of the Golan border has been controlled by Jabhat al Nusra, a branch of al Qaeda, while the southern part is controlled by Kata'ib al Yarmouk, which receives support from ISIS, but is distinct from them. 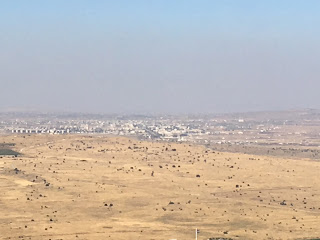 Looking towards the north and (New) Quneitra, Syria. 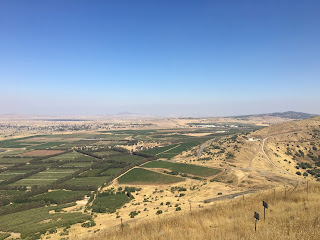 Looking towards the south.

While the UN observation post on the Israeli side, and on Mt. Bental where we were standing, was still staffed by UN soldiers, the post on the Syrian side has been abandoned due to threats to the soldiers by rebels. 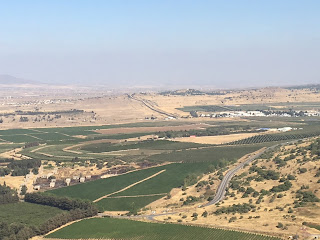 The cluster of white building in the middle right are the UN observation post on the Israeli side.  The fence marking the border is to their left.  The single white building across the fence is the abandoned UN post in Syria. 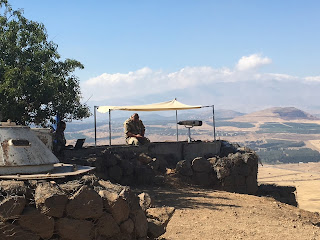 According to Nuriel, tne good aspect of the Syrian civil war is that Syria no longer has an army that can threaten Israel. The bad aspects are far more obvious: 500,000 dead, terrible suffering, etc. As a result of the United State, 95% of Syria's chemical weaponry has been destroyed. The bad part is that ISIS and Hezbollah are trying to get their hands on the remaining 5%. In fact, he said, he believes that both groups have succeeded and worried about the likelihood of a non-convention attack on sites in Europe. 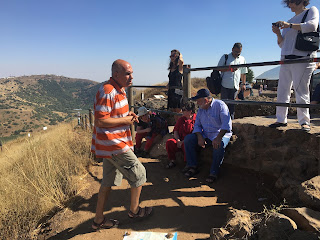 He also was convinced that there will be another war in Lebanon, but that it would be not started by Israel but by Hezbollah. Israel's mission in such a war would be to eliminate the capacity of Hezbollah to threaten Israel. 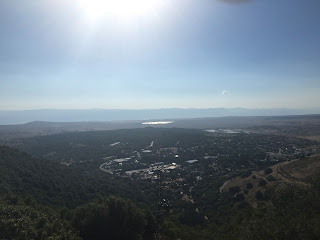 The far ridge is the border between Israel and Lebanon

As for the peace process, Nuriel thinks that Abu Mazen lacks the ability to make peace, and that the political system in Israel makes it impossible for Netanyahu to make peace. He himself supports the 2002 Arab peace initiative. When asked if Netanyahu hadn't rejected that initiative, he replied that 1) people say one thing in public but do differently in secret; and that 2), there have been significant developments behind the scenes in the last two years that the public isn't privy to. 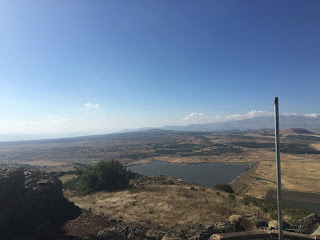 Mt. Hermon marks the border between Israel, Lebanon (to the west) and Syria (to the east)

Concerning the peace process, Nuriel said that certain elements were beyond the ability of the Palestinians to negotiate. Specifically, the status of Jerusalem and the right of return for Palestinian refugees. The former touches upon the religious beliefs of Muslims around the world, while the later has enormous import for countries holding large numbers of Palestinian refugees, such as Lebanon. 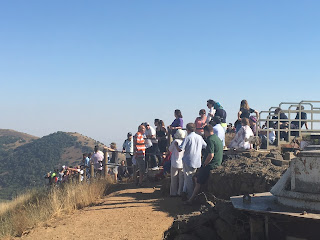 I asked if he thought Marwan Barghouti might be a Palestinian leader who could successfully negotiate a peace treaty and he snorted with laughter, recalling how "before he became a big terrorist," Nuriel had to rescue him. "He was going to give a big talk in Nablus," he recounted, and Israel had learned there was going to be an attempt on his life. "We went in to rescue him and he pissed his pants" out of fear. 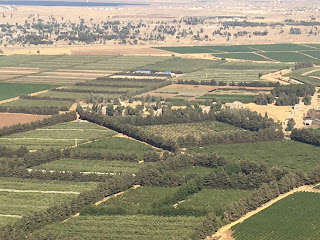 The apple trees and vineyards are on the Israeli side.  The scattered trees and brown land are on the Syrian side (that's the old site of Quneitra).

We asked who he did think might become an effective Palestinian leader, and he suggested Mohammad Dahlan, who last week sponsored an Iftar meal in Jerusalem, a sign, Nuriel said, of someone with political goals. 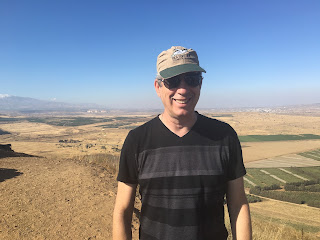 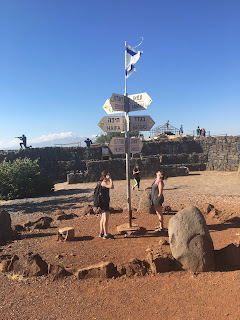 An artist has decided to beautify the military observation post by turning weapons in to statues.  This was my favorite: 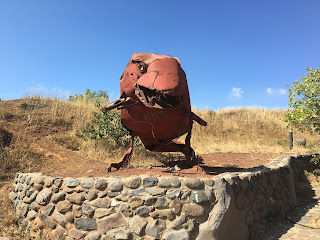 By now it was nearly 6 pm and we had a very long drive ahead of us to get to Tel-Aviv.  We arrived around 8:30.  It wasn't nearly as hot as it had been in the Galilee, but it was at least as humid.  We quickly got dinner before they closed the dining room at 9.  Afterwards, I took a walk on the tayelet (the promenade) with two colleagues before fleeing back to the A/C in the hotel.