My New Favorite Bistro in Paris

When I first came to Paris in 1992, I had a favorite bistro:  Chez Maître Paul near the Odeon metro stop.  That's where I first had poulet gratiné and creme brulée; it's where I first had Bourgeuil wine.  Unfortunately, that bistro is closed.  Today, I found a new favorite, but I'll get to that later.

Around 11 this morning I heard all the church bells in Paris ringing.  Today is Armistice Day and at the 11th hour of the 11th day of the 11th month, the church bells ring on the anniversary of the armistice that ended one of the great catastrophes of the 20th century.  In honor of the holiday the government is closed, the BnF is closed, and almost all public museums are closed.

So where do you go in Paris when almost everything is closed, the one place that never closes, not even on Christmas.  I'll give you one guess. 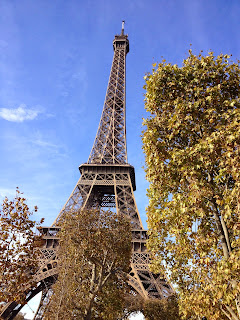 After waiting an eternity in line, I finally got up into the tower. 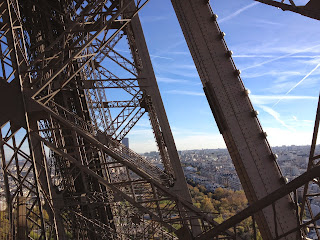 I only went up to the 2nd floor.  When I was buying tickets, they said the summit was full and I couldn't get there.  They started selling tickets from the second floor, but I just could face another line. 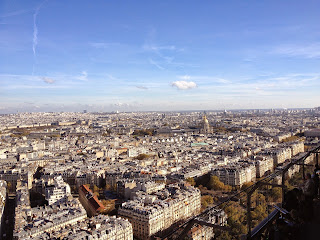 As it happens, today was the sunniest day, with the bluest sky and the warmest temperatures, since I arrived Paris.  The views were terrific.  How about just one more: 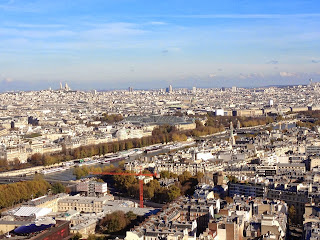 I hadn't planned ahead and brought a sandwich, so I paid too much for some tired baguette with chicken and then headed off for something better when I climbed down.  I wandered through the 7th arrondissement, looking for a boulangerie at 20 rue Jean Nicot, recommended by my uncle.  I eventually found it, though they appear to have changed their name: 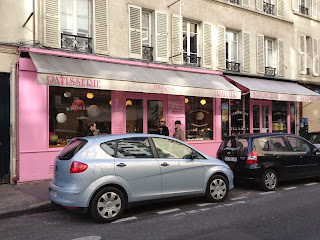 I was hoping it might be one of those places that had a few small tables where you could also have a coffee, but that's not the case.  Instead, I picked up two small items to eat along the Quay d'Orsay.  I started with a roule cannelle, which in America is mistakenly called a "danish," while the French know it is a viennoisserie, as the Viennese invented this pastry.  The German word for the dough that forms its base is a Plunderteig. 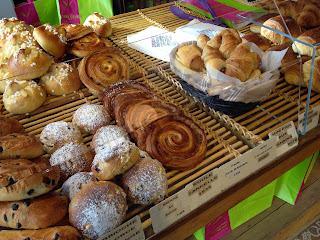 I also decided to try a small macaron.  I picked the light-colored one, which had a chestnut puree filling.  Then I walked to the park along the Seine to eat my desserts. 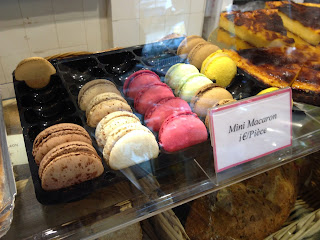 They were just as tasty as you imagine them to be.

I knew there was one museum in Paris still open today:  the Musée de l'Armée (not surprisingly, as it's Armistice Day).  Along the way, I went through the park by the Invalides. 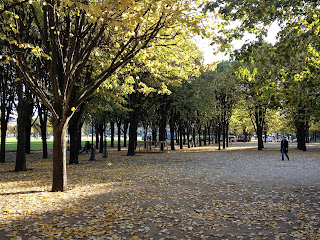 The exhibition is on the view of the war from the front during WWI.  It's on oddly laid out exhibit:  the first wing is on the ground floor and ends in a dead end.  The next two weeks are in the other side of the building, four floors up, and each ends in a dead end as well.  I wasn't sure if they were trying to make a metacommentary on the war.

Some of the images they used were incredible.  I particularly liked some of the Japanese war propaganda from the Russo-Japanese war of 1905. 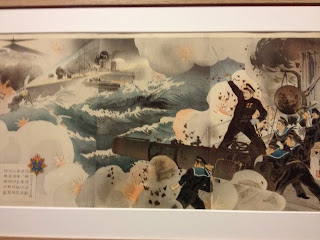 Afterwards, I went to find a place to have some coffee and read yesterday's paper.  From there, I headed over the Seine to the Tuileries, where by now, the sun had mostly set and the earlier warmth of the day had vanished. 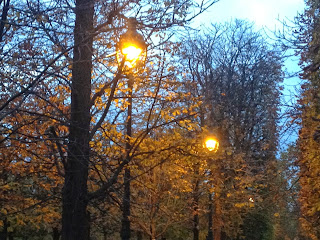 Then it was back to the hotel for a bit and to open my window so it isn't all hot and stuffy when I get back from dinner.

I thought about trying Le Bistro Paul Bert, which isn't too far away, but they supposedly are so popular you can't get in without a reservation made days in advance.  In the end, I went back to Picotin, where I ate last week.  I loved it so much, I've made it my new favorite bistro in Paris.

I started off with the oignon deux farci au chorizo, parmesan, et basilic.  It was fantastic.  Not huge or overwhelming; just a few simple ingredients that were full of flavor. 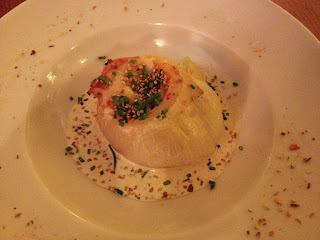 For my main course, I had the risotto au vin rouge et canard confit. I worried at first if risotto would go that well as a main course and would the duck just be a few small pieces as garnish. No need to fear; this was really filling. And the flavors were out of this world. I just can't rave enough about it. In addition to the risotto and duck, it also had sauteed morels and shaved parmesan. What can I say that would any way add to just that? 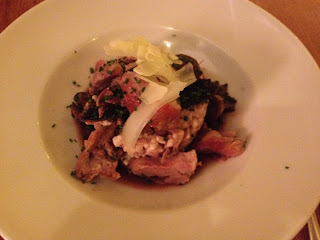 Last time I had the charlotte au poire, so this time I thought I would try something different and ordered the cheesecake au speculoos et coulis de fruits rouges. It definitely was different. This cheesecake isn't cooked; in fact, it has no eggs in it all. They use a goat cheese called Sainte Maur, which is whipped very light with sugar and creme fraiche and then layered on top of a cinnamon speculoos, a shortbread dough-based cookie. The mixture of raspberry and strawberry coulis adds just the right now of tartness and sweetness to offset the goat cheese. I wish I could find out how to make this. It was wonderful! 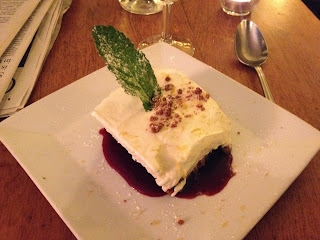 Tomorrow it's back to work at the BnF.  I'm bringing my camera in case I need to make some copies.