Finishing Up at the BnF

I started expanding my research to look for material look at the legal implications of the two trials I'm examining.  By early afternoon, I was pretty much done, so I decided to visit some small art museums in the area known as Grands Boulevards. 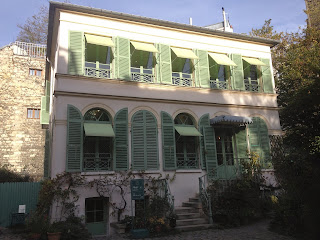 This is the former home of George Sand and is now devoted to the arts of the first half of the 19th century.  The current exhibition is on a massive book promoting the disappearing medieval France that came out beginning in the 1830s.  Similar in some ways to the project of the Brothers Grimm:  documenting the "patrimony" of the imagined nation. 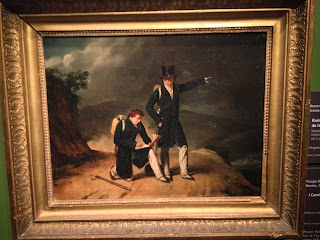 The main house is a shrine to all things Sand (and her extended family).  The music of Chopin plays in this room on the ground floor: 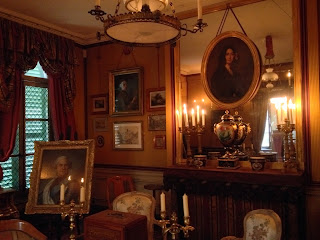 My next stop was the Musee National Gustave-Moreau.  Never heard of Gustave-Moreau?  You're not alone.  An important painter in the Symbolist movement of the 19th century, his work remains, in my opinion at least, justifiably obscure.  The house is interesting in that preserves in amber his living quarters and his atelier.

There was this lovely wrought iron staircase: 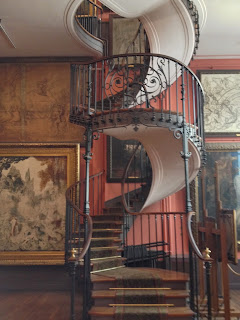 Then, there's this so-called "masterpiece," depicting the moment when Jupiter revealed too much of himself to Semmele.  This should give you a pretty good idea of his style: 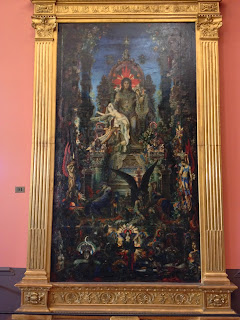 But for true aesthetic horror in Paris, one need only look no further than McDonald's.  I saw this sign advertising a gastronomic depravity on my walk towards the Madeleine.  It's so wrong, on so many, many levels: 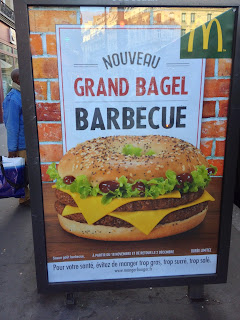 Quickly fleeing, I made my way to the Grands Boulevards with their high end department stores and early Christmas displays. 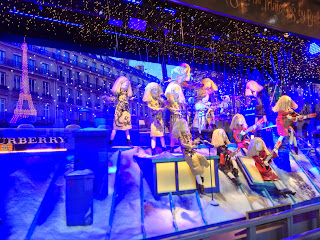 After that, it was to rue Royal and the gorgeous Laduree tea room. 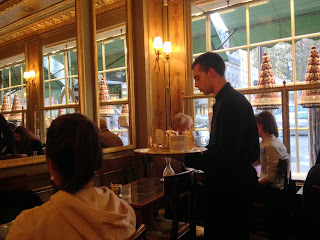 (Those are trees made out of macarons in the window).  I ordered a cafe creme and a Mont Blanc.  The coffee comes Viennese style, with separate pitchers of hot coffee and hot milk.  The Mont Blanc is an elaborate dessert with a base dry, crispy meringue, coated in whipped cream (known here as creme chantilly).  Then there is a large mound of chestnut puree, and on top of that a little more of the snowy chantilly.  Oh, and the dishes are porcelain: 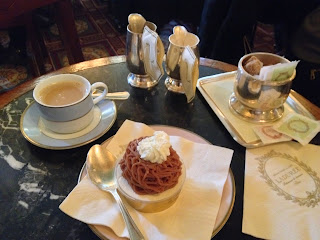 An old acquaintance from my days in Washington, D.C. contacted me a few days ago via Facebook as his trip to Paris overlapped with mine.  We met up this evening at the home of some friends of his near Les Halles. 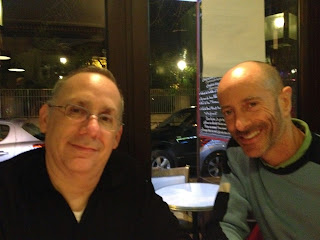 My friend Jeff (on the left), with his childhood friend, Steve.

We went to dinner at a small cafe near Les Halles, but my steak au poivre, which I ordered au pointe, turned out to be much rarer than I liked, so after such a rich tea break earlier, I decided to skip dessert. 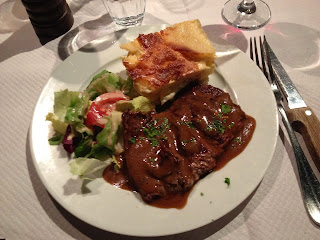