Approved Colors of Clothing in Paris

I've noticed that only certain colors of clothing are appropriate to wear in Paris in November. They are:  black, grey, dark blue (or some combination of the three).  You are allowed a little more leeway in the scarf (which is de rigueur, by the way), which can even include dark reds.  I feel very conspicuous in my tan dockers on the Metro; thank God, I also brought a black leather jacket.  I think I'm keeping my bright red windbreaker locked away until I'm in New York.

When I woke up this morning it was 39 F outside, but clear and sunny.  Less pain in the knee today.  Back to work at the BnF, but today I had a pleasant surprise when I ran into a colleague of mine, who retired from our history department a few years ago.  Bill and his wife Linda are in Paris this month doing research, so we had lunch together in the BnF cafe.

After a while, my eyes begin to glaze over so, I decided I needed to see some sunlight now that we had a partially sunny day.  I decided to walk up to a near by Metro stop and head over to the Latin Quarter.

Along the way, I passed some fun graffiti on the walls.

This one is a block away from the BnF: 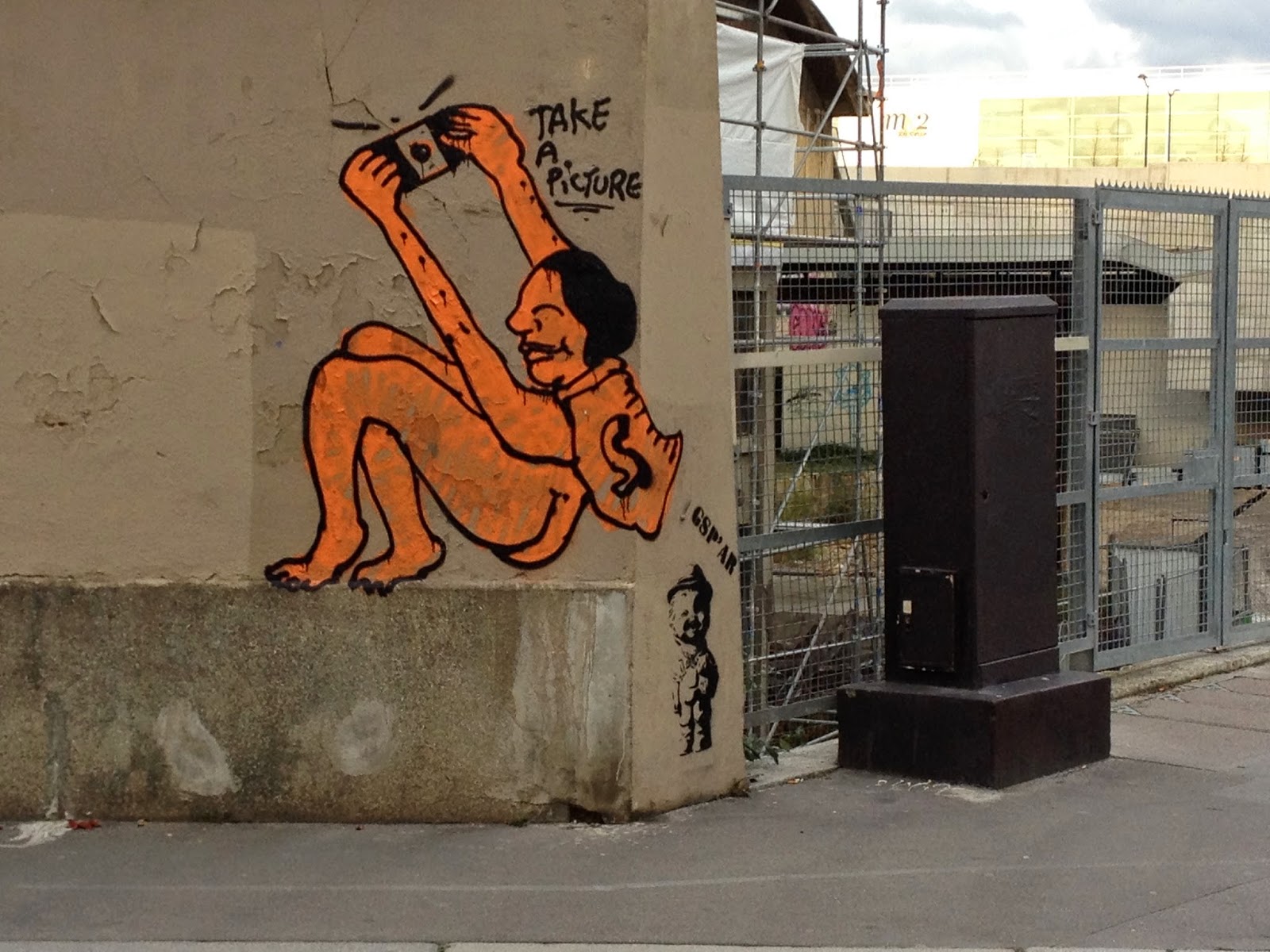 Then there was this one a block further. 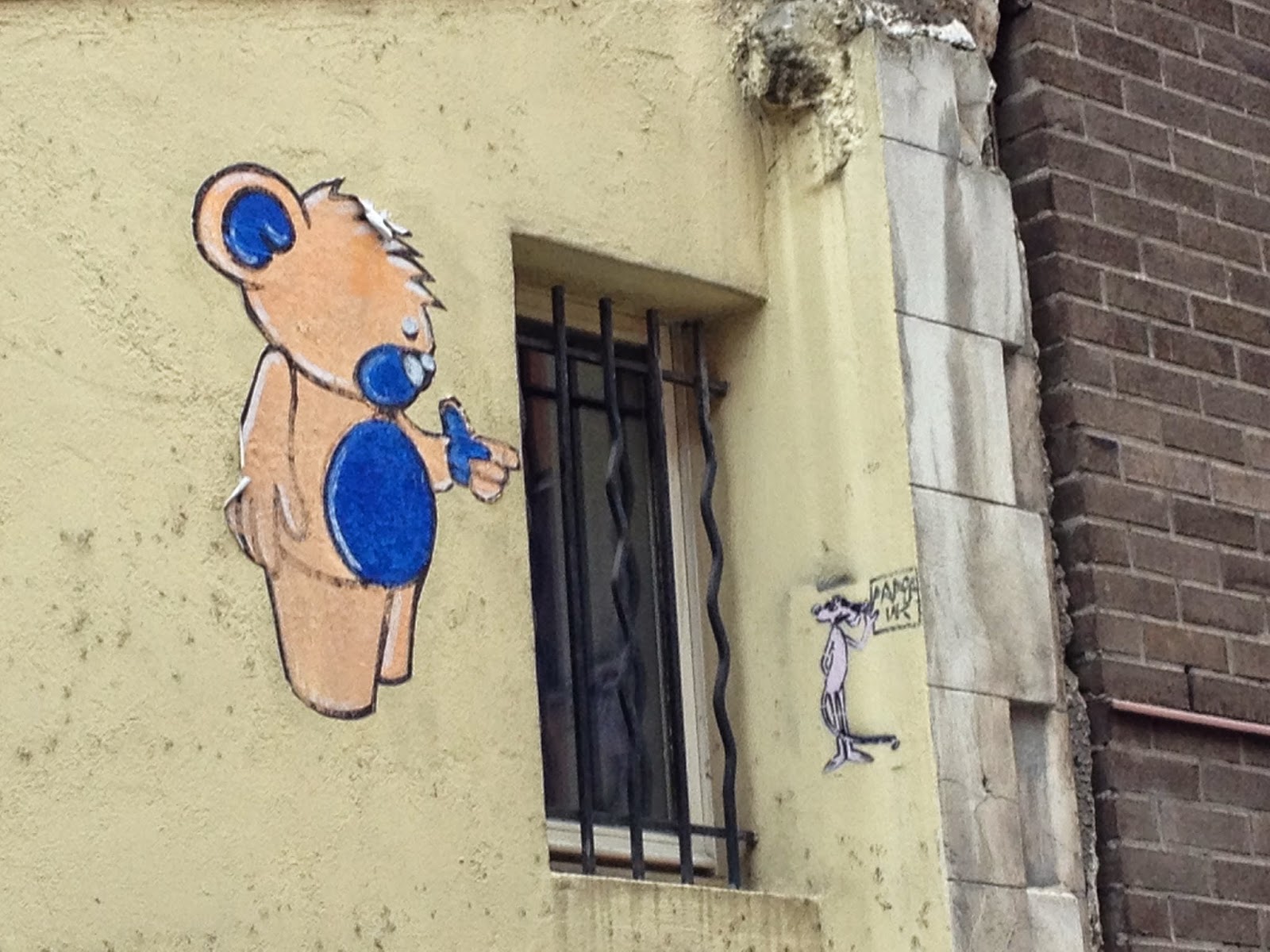 And finally this one a block from the Metro. It says (I think) "one who steals an egg, steals a chicken." 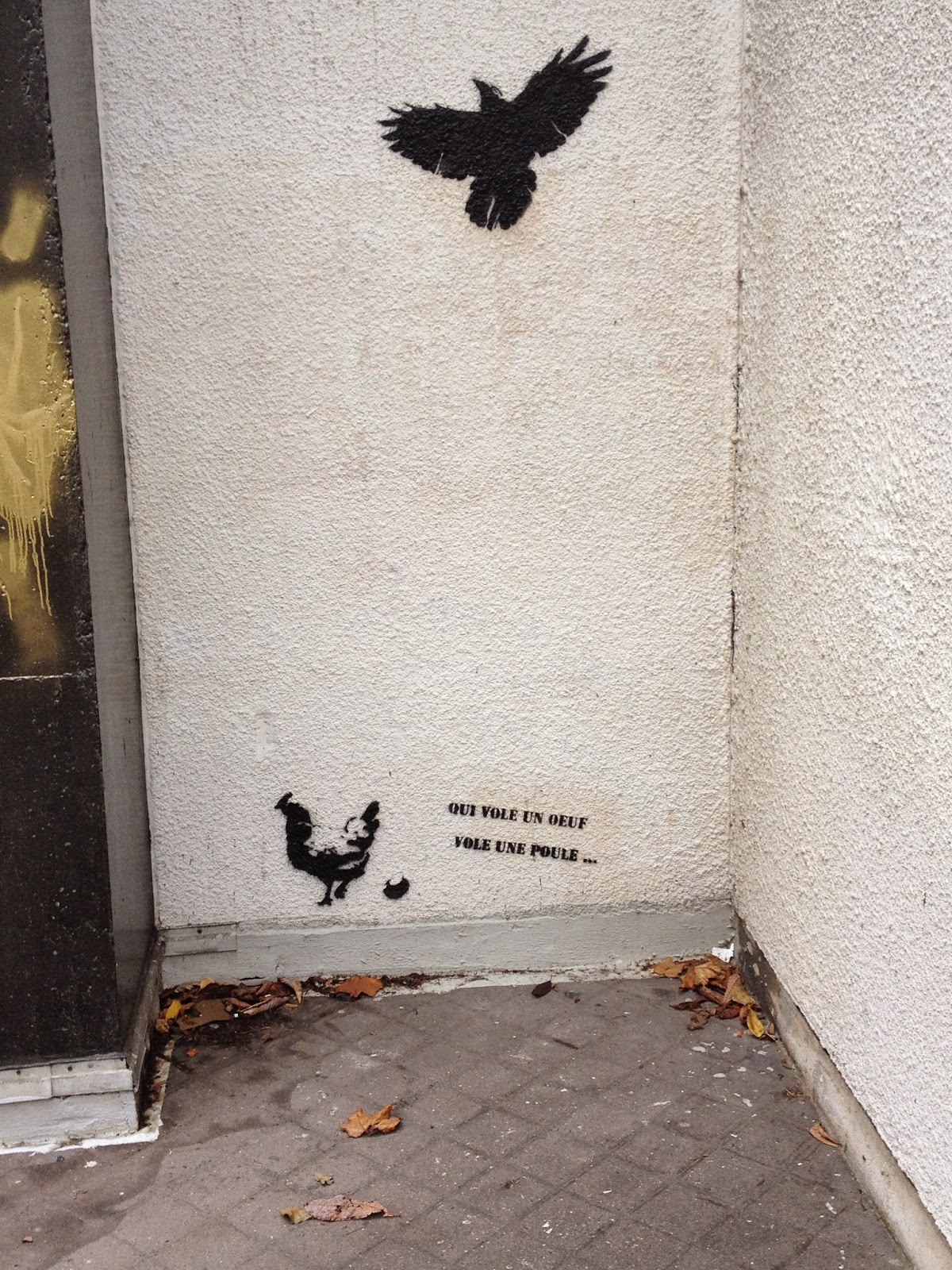 I wandered around the Rue Mouffetard, but the markets described in the guidebook must be in the morning.  I stopped for a small coffee and a pain au chocolat aux amandes, and then kept on walking through some of the oldest streets in Paris.

When I got to Boulevard St. Michel, I looked for Rue Racine and snapped this shot (to the confusion of the passers by): 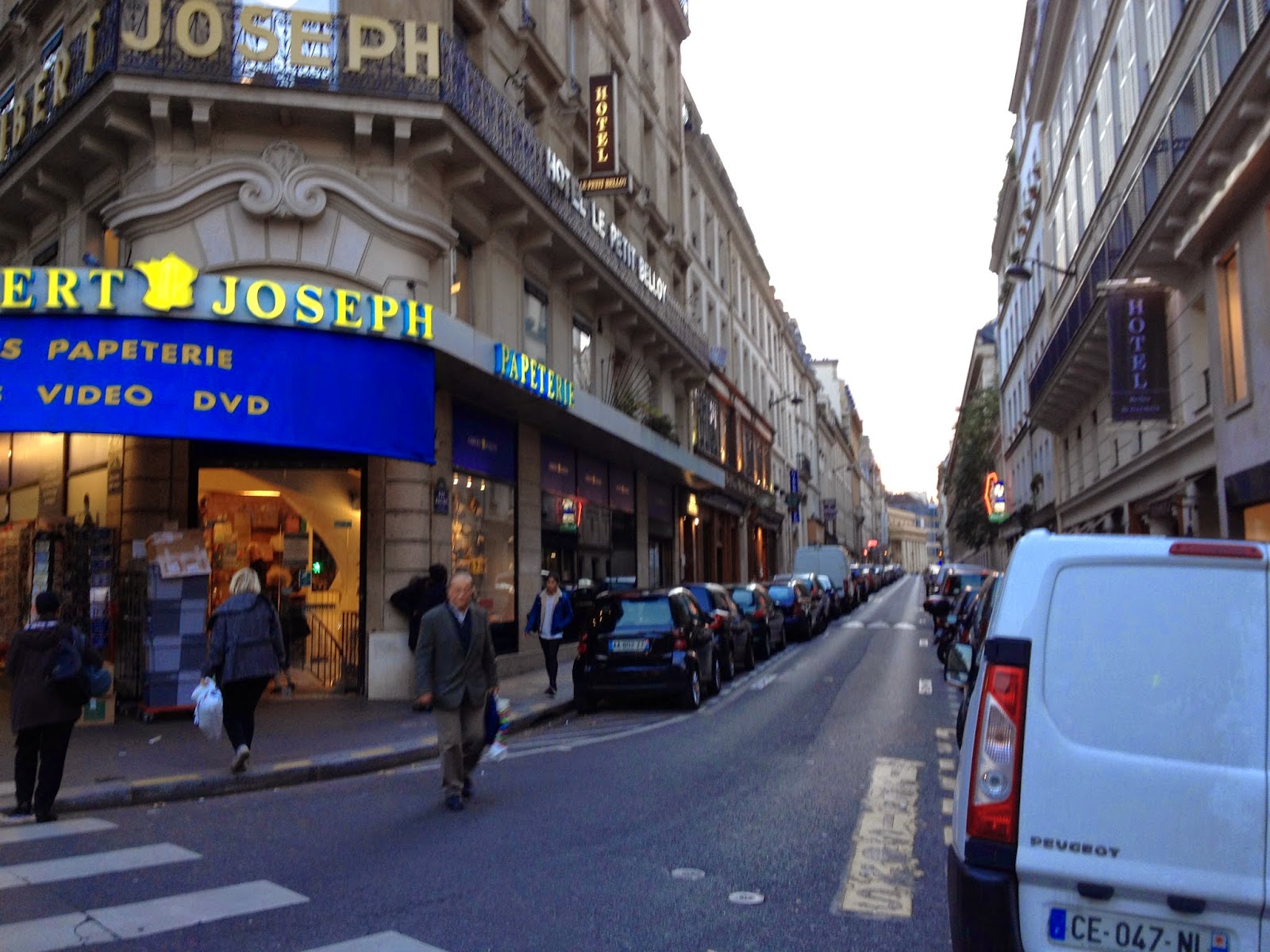 Why?  Because this is where one of the murders I'm researching took place.  On May 18th, 1926, at around 2:30 pm, Simon Petlura, former general of the Ukrainian Nationalist Army, stepped out of a restaurant here after having lunch.  He was confronted by Sholom Schwartzbard, who shot him several times, killing him.  When he was arrested (with the proverbial smoking gun in his hand), he said "J'ai tué un assassin." His trial last 8 days; the jury took less than 25 minutes to acquit.

I headed down to the Seine and crossed over to the Ile St.-Louis.  This is what Paris looks like at 5:15 pm in November: 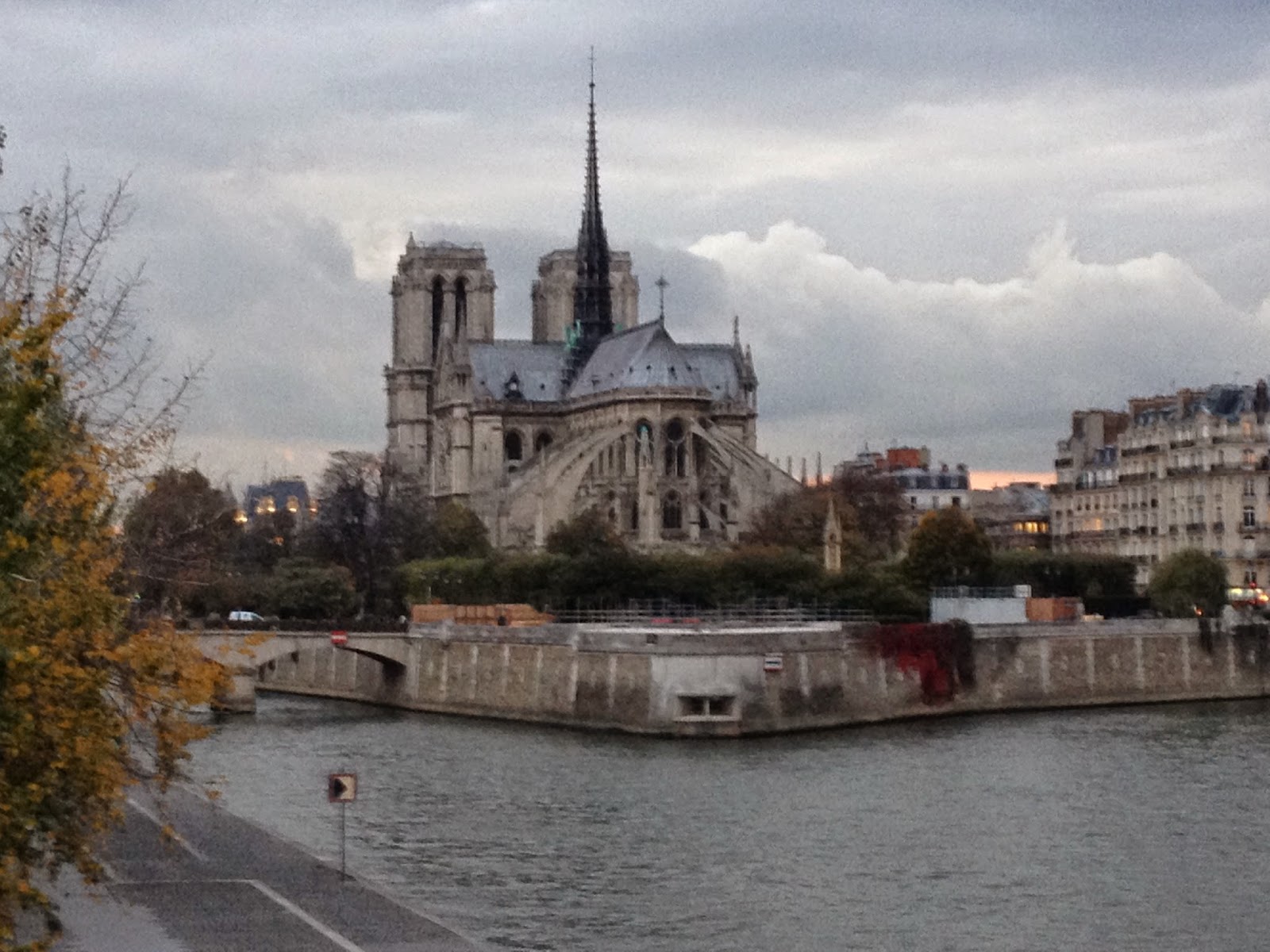 This is the bridge between the Ile St.-Louis and the Ile de la Cité. 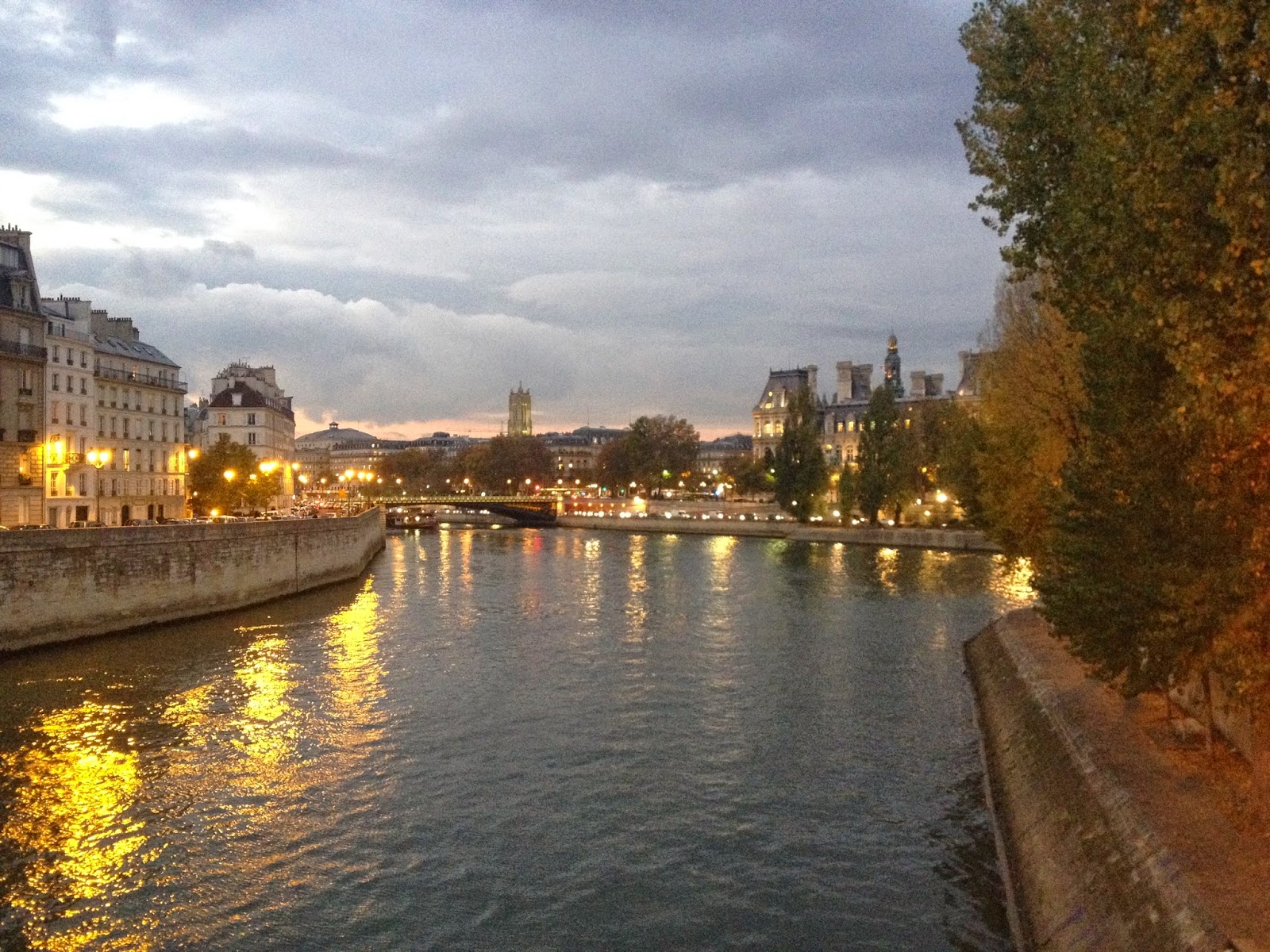 By 5:45, my feet were starting to hurt.  I had been walking since 3:30, except for a 20 minute break at the boulangerie, so I figured I could sit for a while in Notre Dame.  I arrived just as the vesper service was starting so I sat in the far back for about 25 minutes and listened.

I eventually found my way to the Café des Musées in the northern fringe of the Marais.  I waited until it was 7 pm and there were at least two other people sitting in the restaurant before I came in.  I also made sure I could pay with a credit card.

After seeing how I stumbled over my French they gave me an English menu, though I can read a French one just fine.  I ordered the magret de canard with salad and frites.  The duck was cooked just right, with crispy and salty skin and very crisp and salty frites.  I washed it down with a glass of Bordeaux. 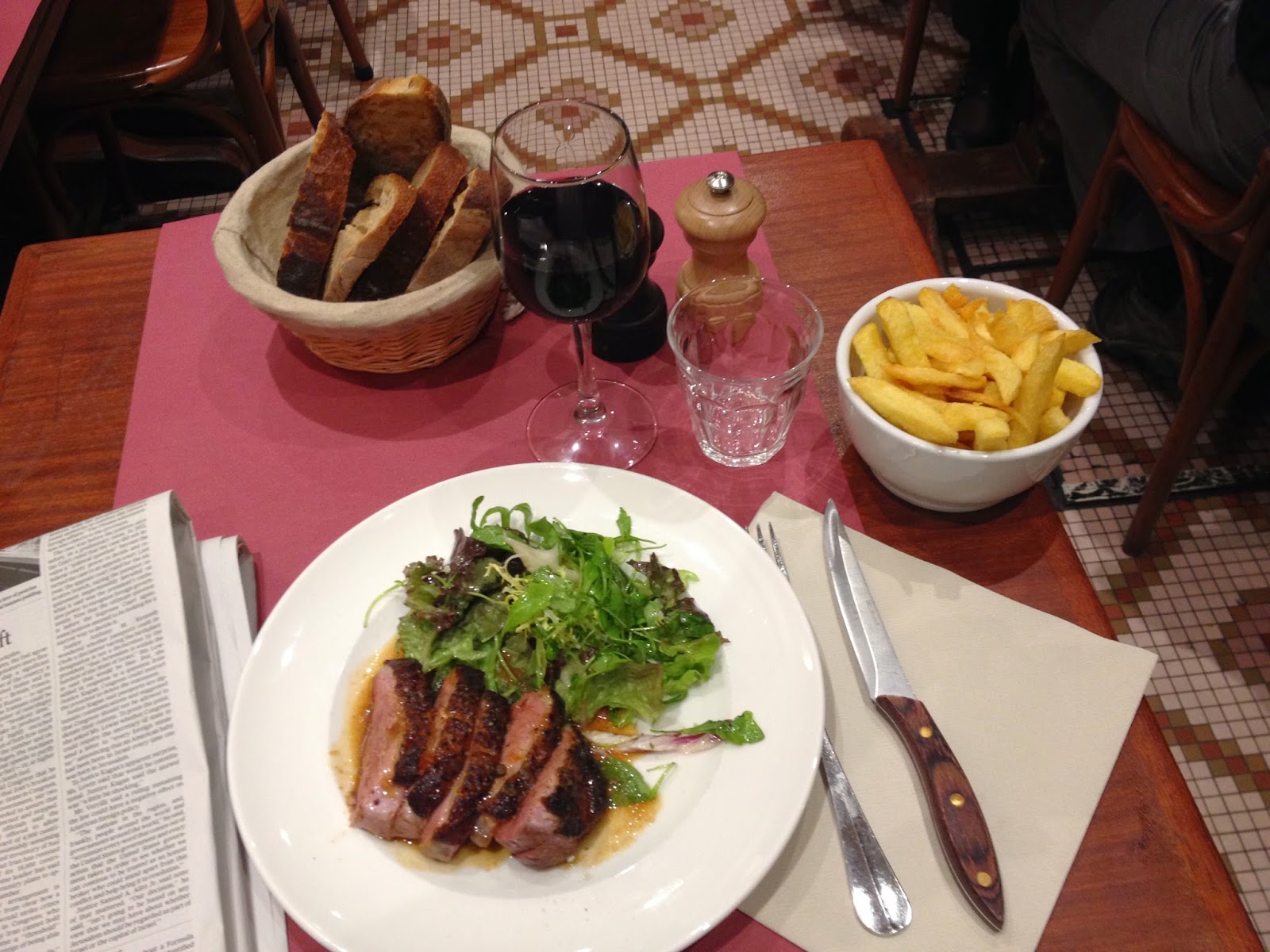 When you consider that I walked for close to four hours today (about a 1000 calories), I think I took care of any fears of gaining weight even though I also had for dessert a "Paris-Brest à la maison." 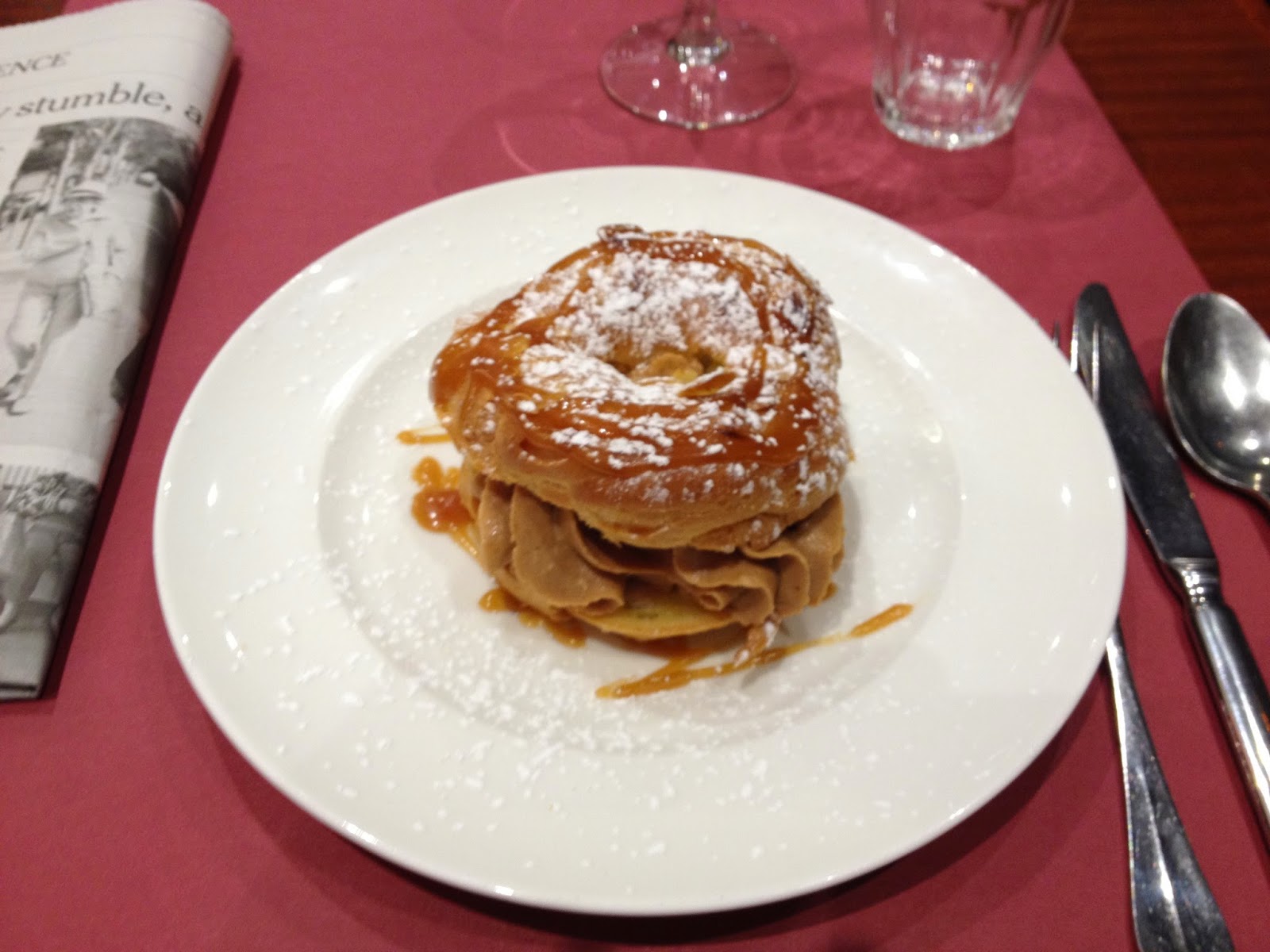 I had never heard of this before, but it's very, very good.  This is made with a pâte à choux dough (similar to an eclair), which is then filled with a crème mousseline pralinée.  A few drops of caramel complete the dish.

That was enough for one night.  The whole meal came to 32.30 euros, which I thought was pretty reasonable considering what I had.  I made sure to not to rush, so I didn't leave until just before 8 pm.  After that it was back to the hotel to catch up on the news of how bad the midterm elections were in the States.  I probably should have had more wine to drown my sorrows.