It sounds much nicer than "fall in Paris," or "a cold, rainy, and windy day in Paris," but it's the same thing.

After a moderately successful conference in Florida, where I again had a scare that someone else was working on a project I had started (and again, it turned out only to be related, not, Thank God, the same), I flew on "screaming toddler airlines" to Paris.  "STA," as I like to abbreviate it, goes by many official names in order to conceal its true nature until it's too late to do anything about it.  Last night, a couple with two very young children sat in the row ahead of me, and they hadn't even sat down when the brats started crying.  I found out later, though, that the worst was an infant three rows ahead who had a pair of lungs that indicate a good career in auctioneering.

I took my sleeping pill, popped in my ear plugs, and closed my eyes.  Despite the intermittent crying I did manage to nod off and I think I may have actually slept for more than three of the four hours I had my eyes closed.

No problems at all navigating the airport or the RER or the Metro, and I reached my hotel with no difficulties.  The room wasn't ready, so I decided to start acclimating myself by going for a long walk through the neighborhood.  I found the post office, the laundromat, several banks and markets, and some cafes. 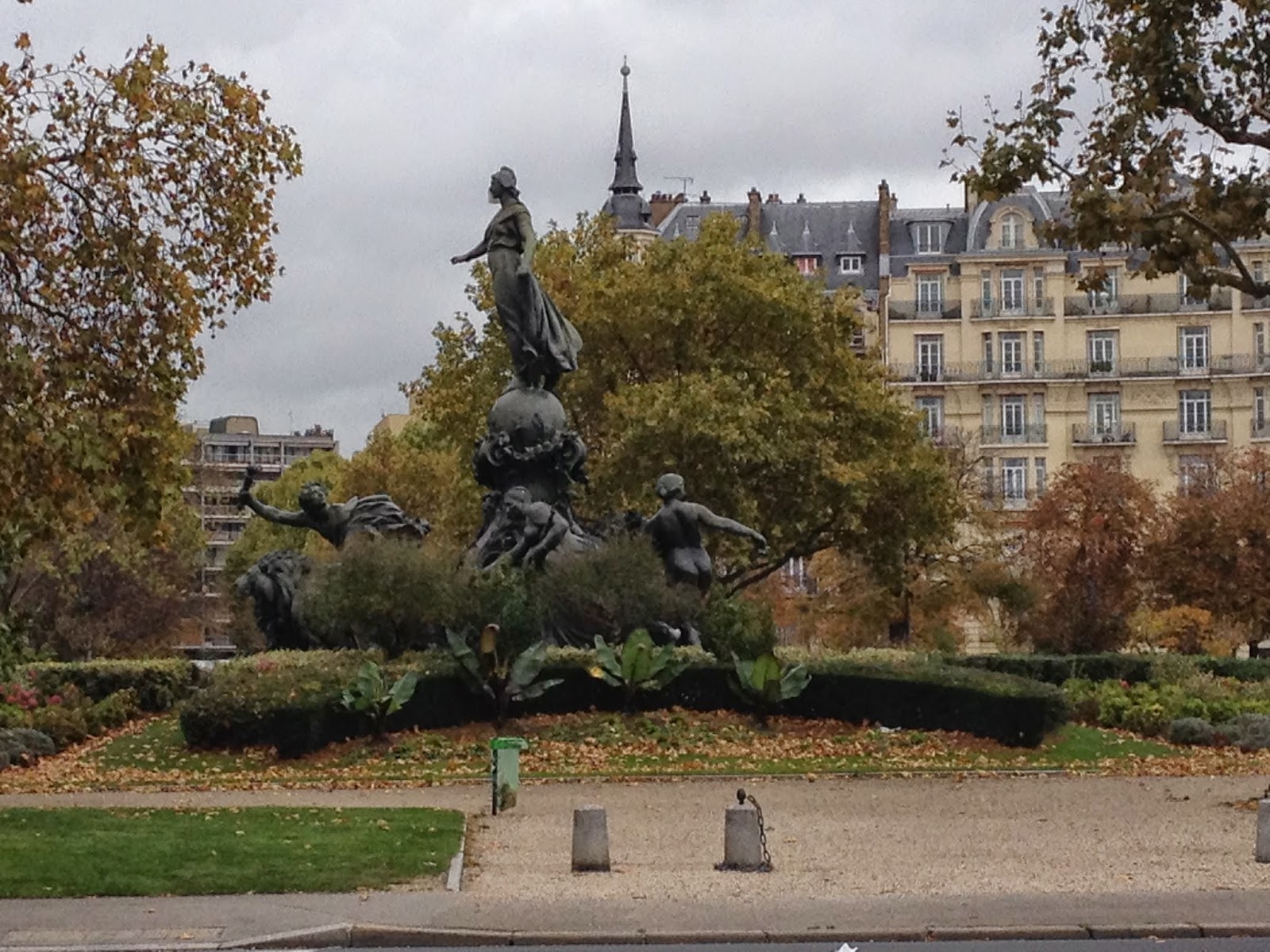 This is Place de la Nation; probably the closest thing to my hotel that might be considered a tourist attraction (it's about 6 blocks away).  I'm in the 12th arrondissement, which is pretty quiet and almost suburban.  As you can see, the sky is grey (and will probably remain so until next spring), and the leaves are turning and falling.

I walked as far as the Place de la Bastille to check out what was showing at the Opera.  Tonight's the last night for Rossini's Barber of Seville, but I'm pretty sure I would sleep through the performance if I went. 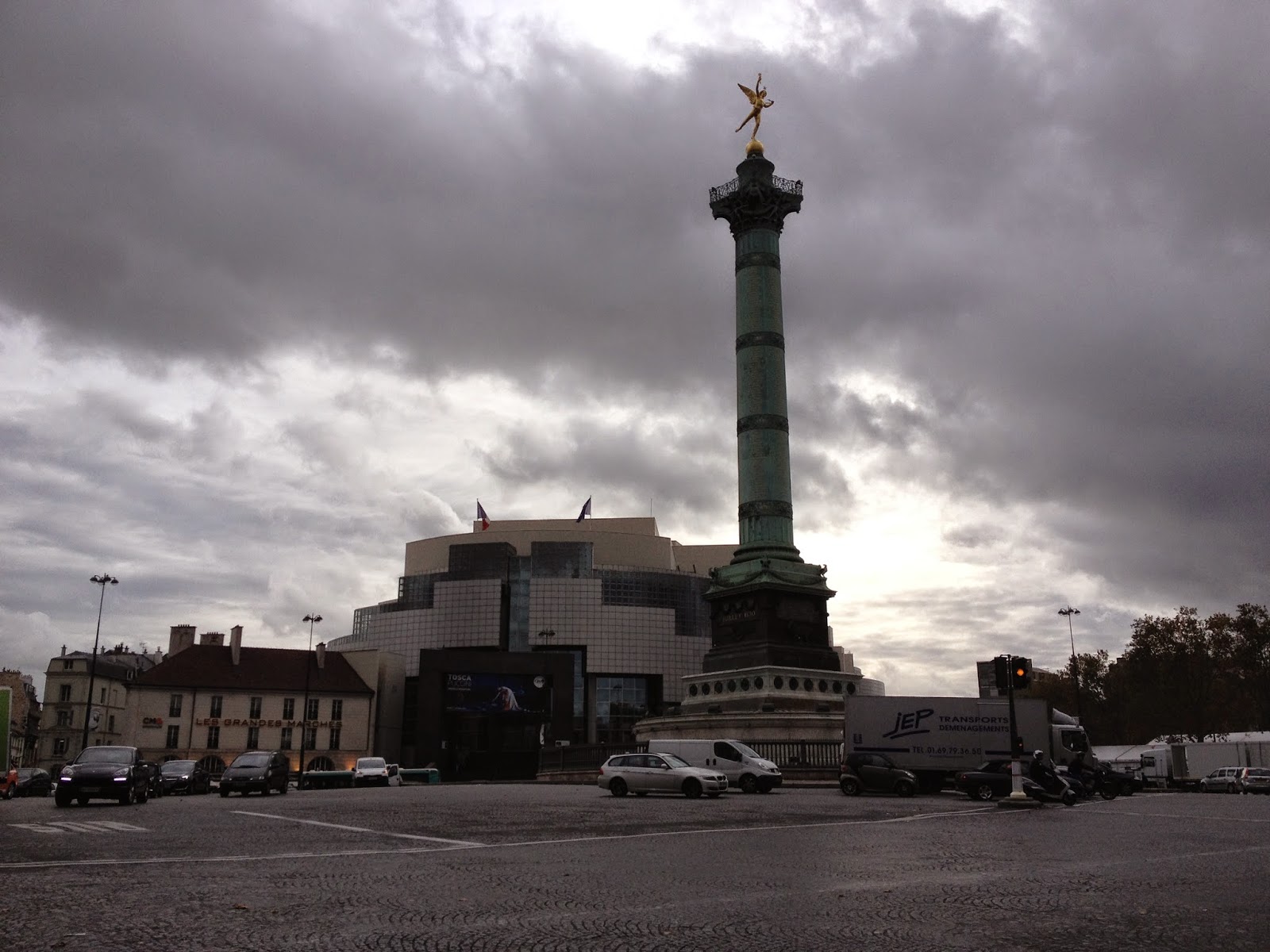 I noticed several times on my walk that this or that scene would remind me of an afternoon in Budapest or Prague, though I don't doubt those cities had copied the architectural styles of Paris in its heyday; but as I'm spending so much more time there than here, these are the associations I have.

My goal on this trip is to walk at least 2-3 hours a day.  This will somewhat replace all the bicycling I'm not doing while I'm here.  I walked two hours before lunch and then another hour after lunch.

For lunch, I went to a small cafe off Rue de la Roquette called "Cafe des Anges."  The food was inexpensive and tasty and it had a wide and eclectic clientele. 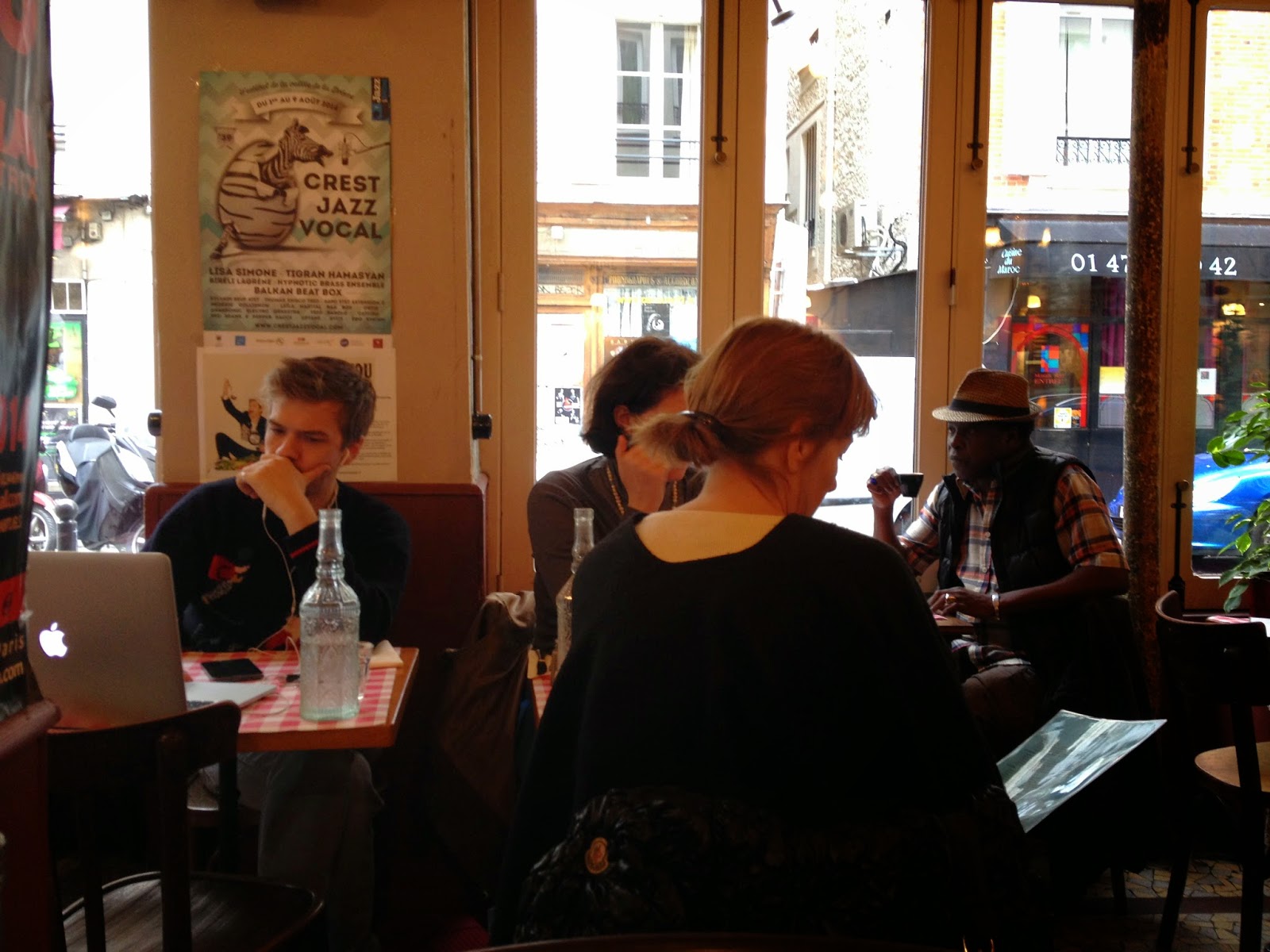 As I walked through the neighborhoods on my way back from the 11th to the 12th arrondissement, I noticed some quirky artistic expressions in this eclectic neighborhood.

First off was this highly unusual take on a scooter, with its own astroturf. 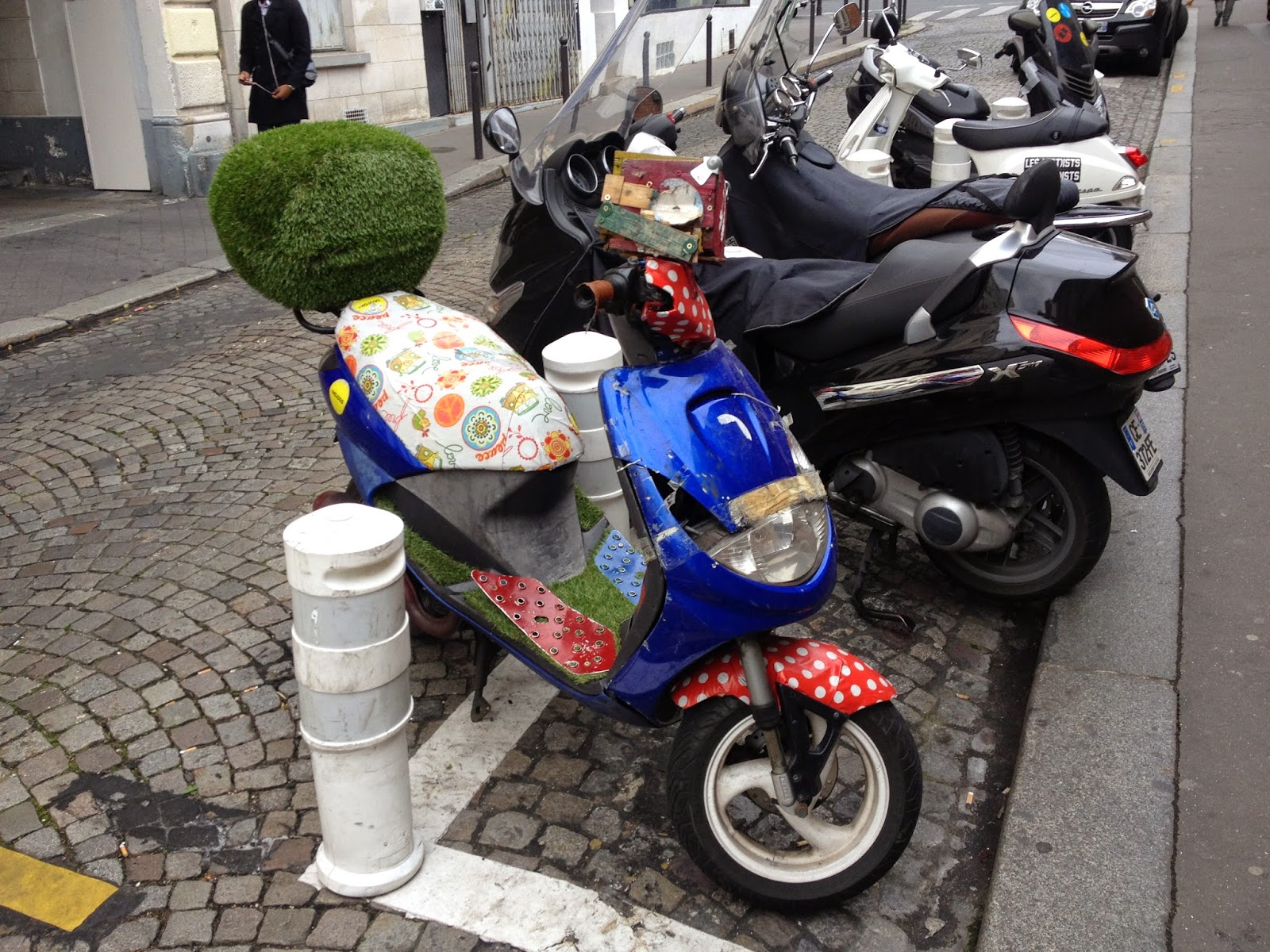 Then there was some fun graffiti: 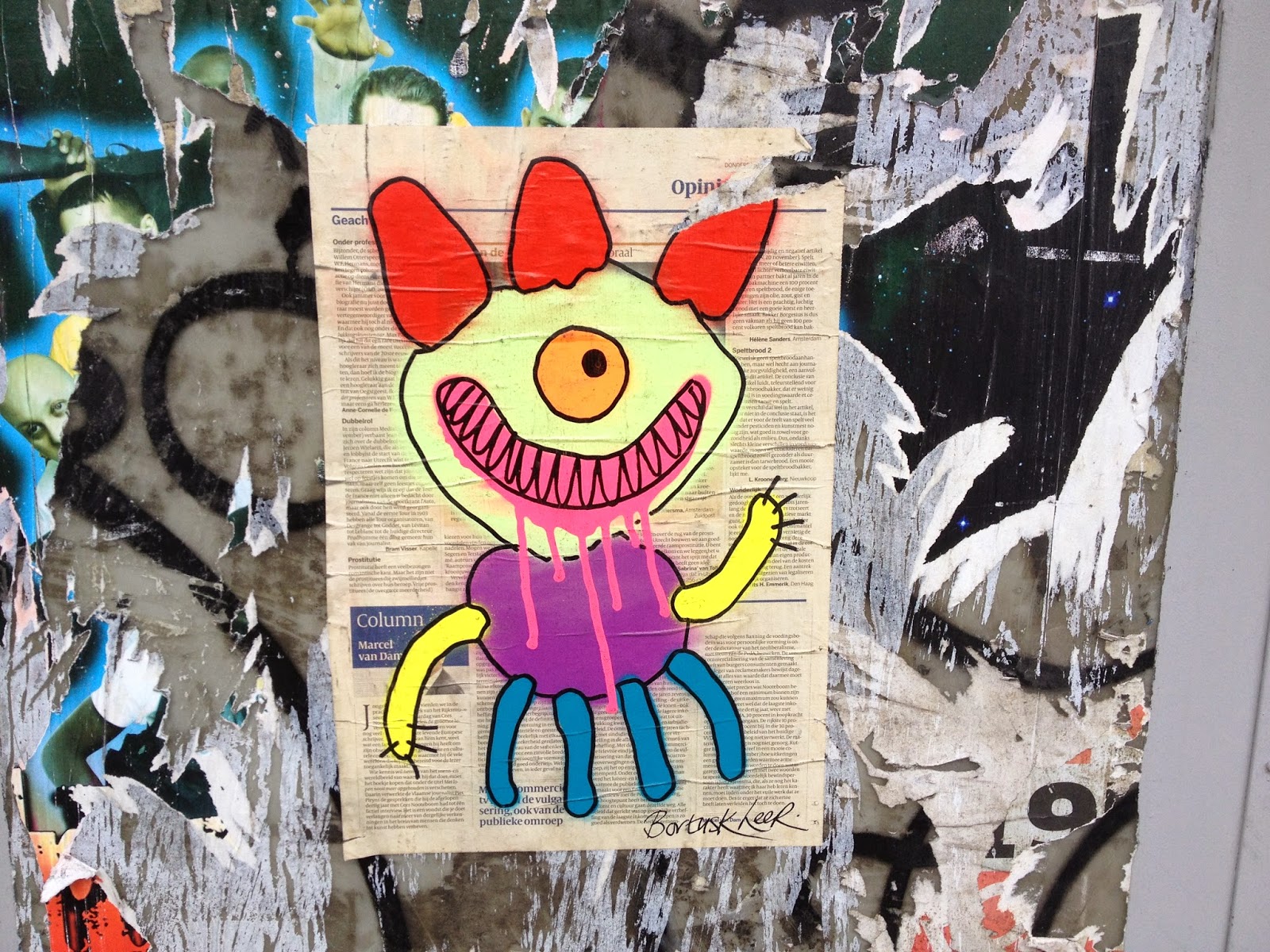 When I got back to the hotel a little before 2, they had almost finished making up my room.  After washing up I lay down on the bed and almost fell asleep (despite the kids at the nearby high school playing basket ball next door).  I really try to avoid going to sleep early when I arrive on an overnight flight as I want my body to adapt to the new time zone as soon as possible.

I decided to go out for another walk, this time through the Latin Quarter, but I soon discovered a problem with the hotel:  its elevator.  It isn't its small size; most European elevators are tiny. No, its biggest problem is its reluctance to come when you call it, go to the floor you want, or even stop at the floor when it does decide to stop (twice it stopped between floors).  I've decided to take the stairs for the rest of the trip (it's only on what in America would be called the fourth floor).

After about 45 minutes of walking I stopped for a cafe au lait and pain au chocolate.  It turned out that I paid less than I would have at Starbucks in the States for the same, but the quality was better.

With a little more energy, I continued my walk.  I ran across this lovely tribute to the ground breaking French naturalist, Georges Cuvier, by the Museum of Natural History where it worked. 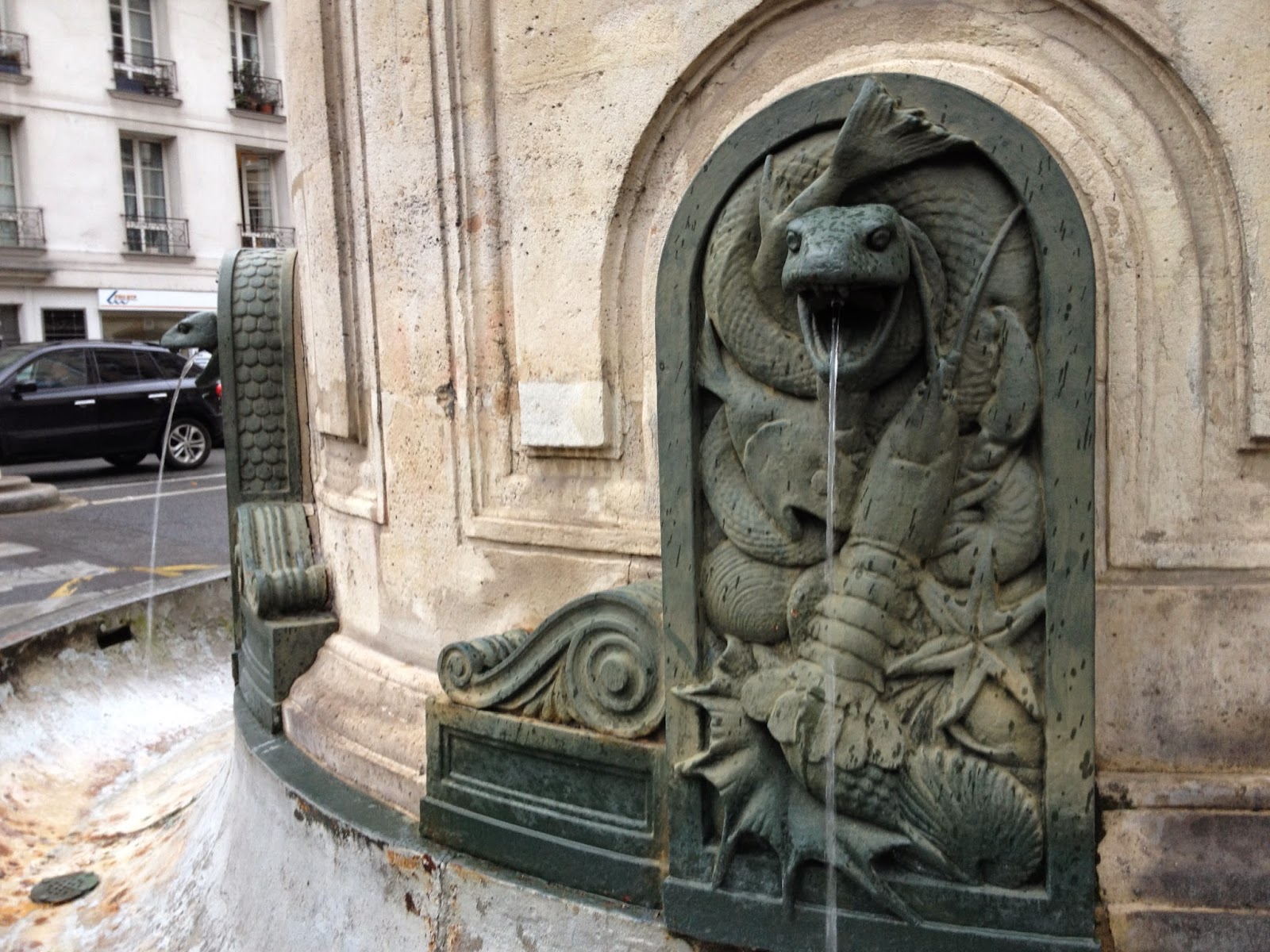 By 4:30 it was getting windy and starting to drizzle.  My knee was also hurting, so I made my way back towards Notre Dame, where I could sit for a bit.  A long the way, I passed this cafe, all lit up in the evening rain: 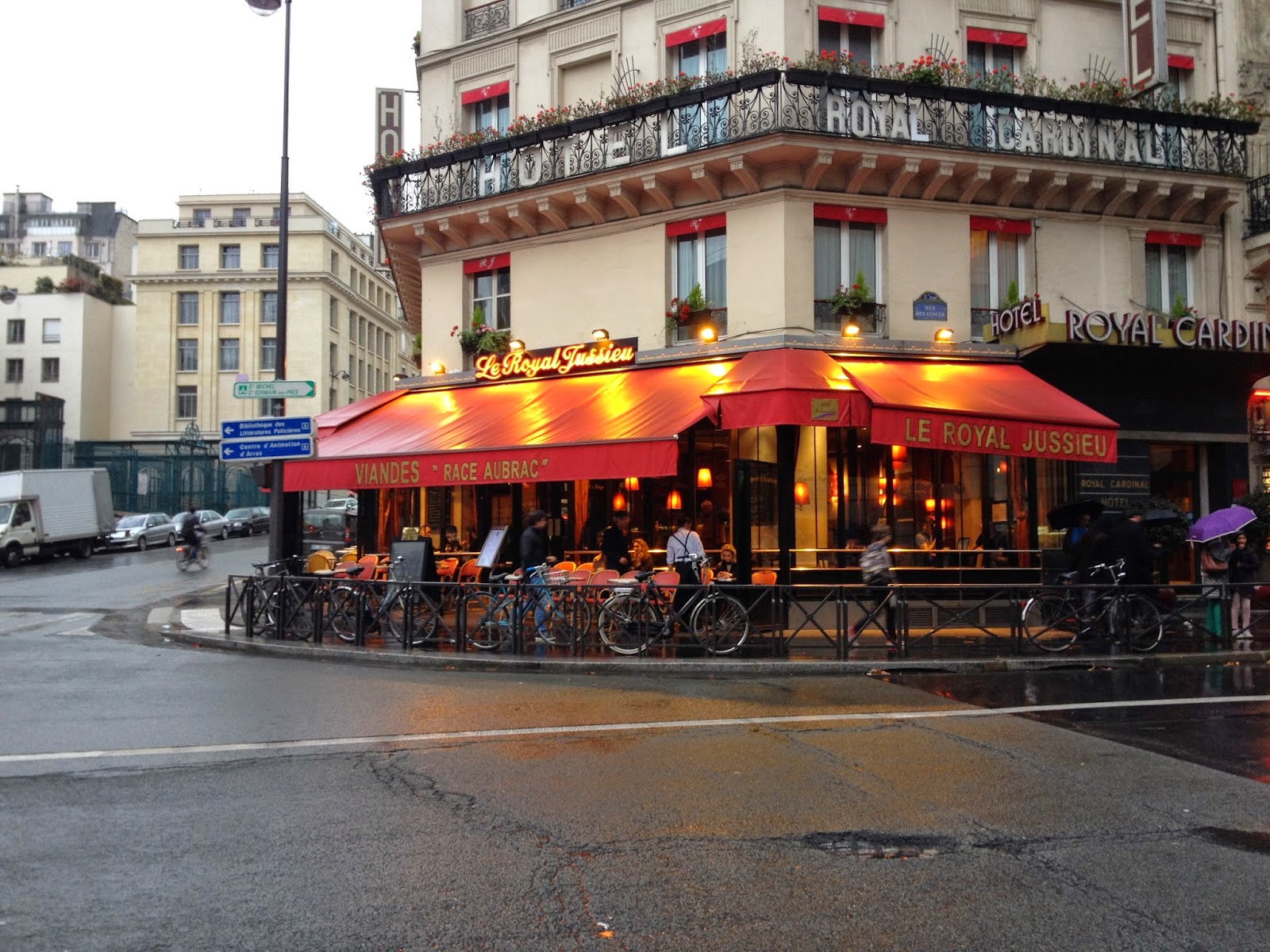 After a short break in Notre Dame, I made my way to the Marais.  The wind was really picking up and turning my umbrella inside out.  I finally made it to Le Tartine, where I chose not to order a tartine, but, instead had French onion soup and a glass of Bourgeuil. 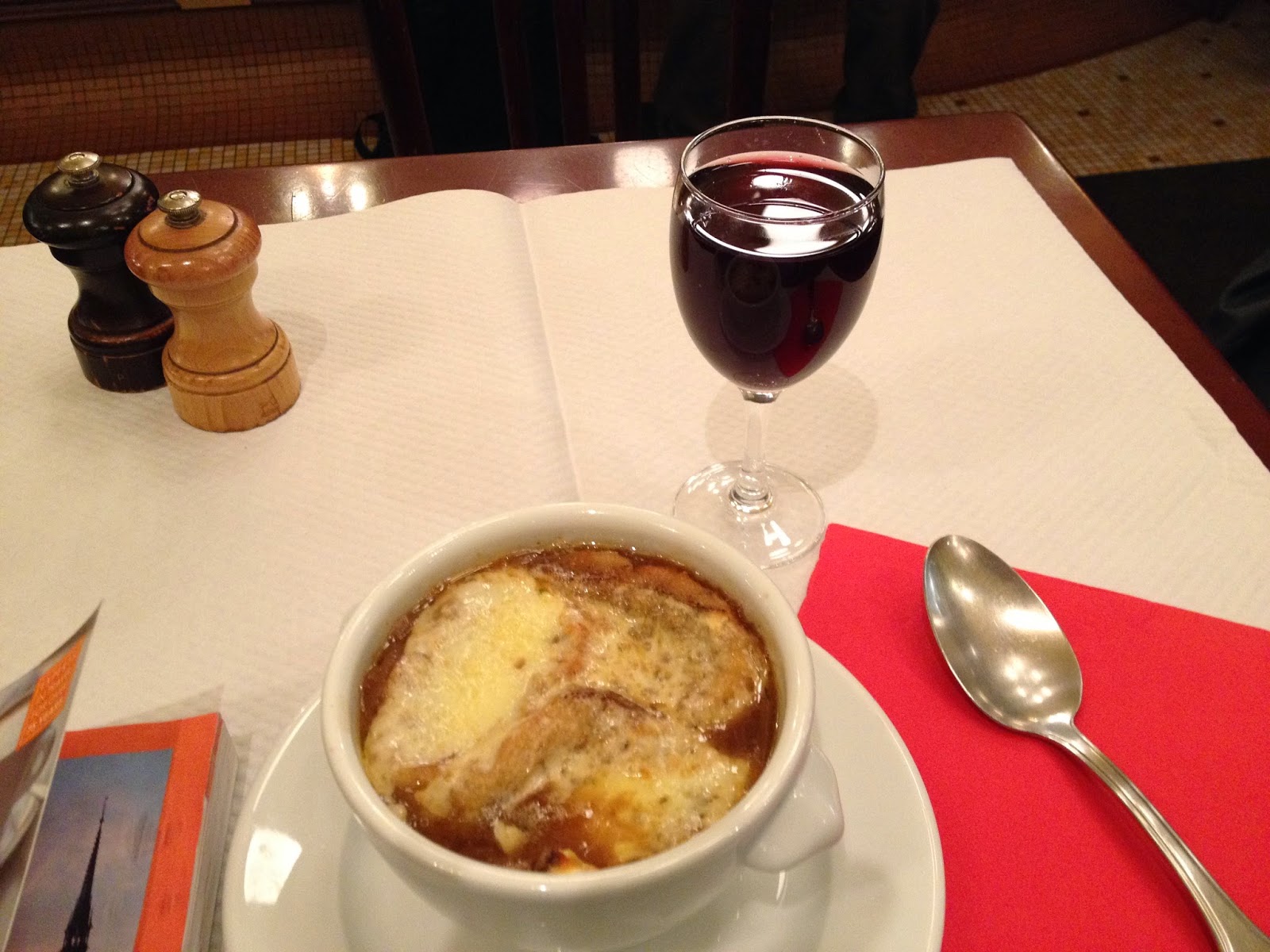 Even though it was only 6:30 pm, I had had enough for today.  I made my way back to the hotel and climbed the floors to my room.  All together, I think I walked 5 hours today.  I'll be asleep in less than half an hour.