This morning I met my uncle and some of his brunch friends for breakfast at Barney Greengrass on the Upper West Side.  They all met many years before at a different restaurant, but switched after it changed under new management.  Now they regularly meet here. 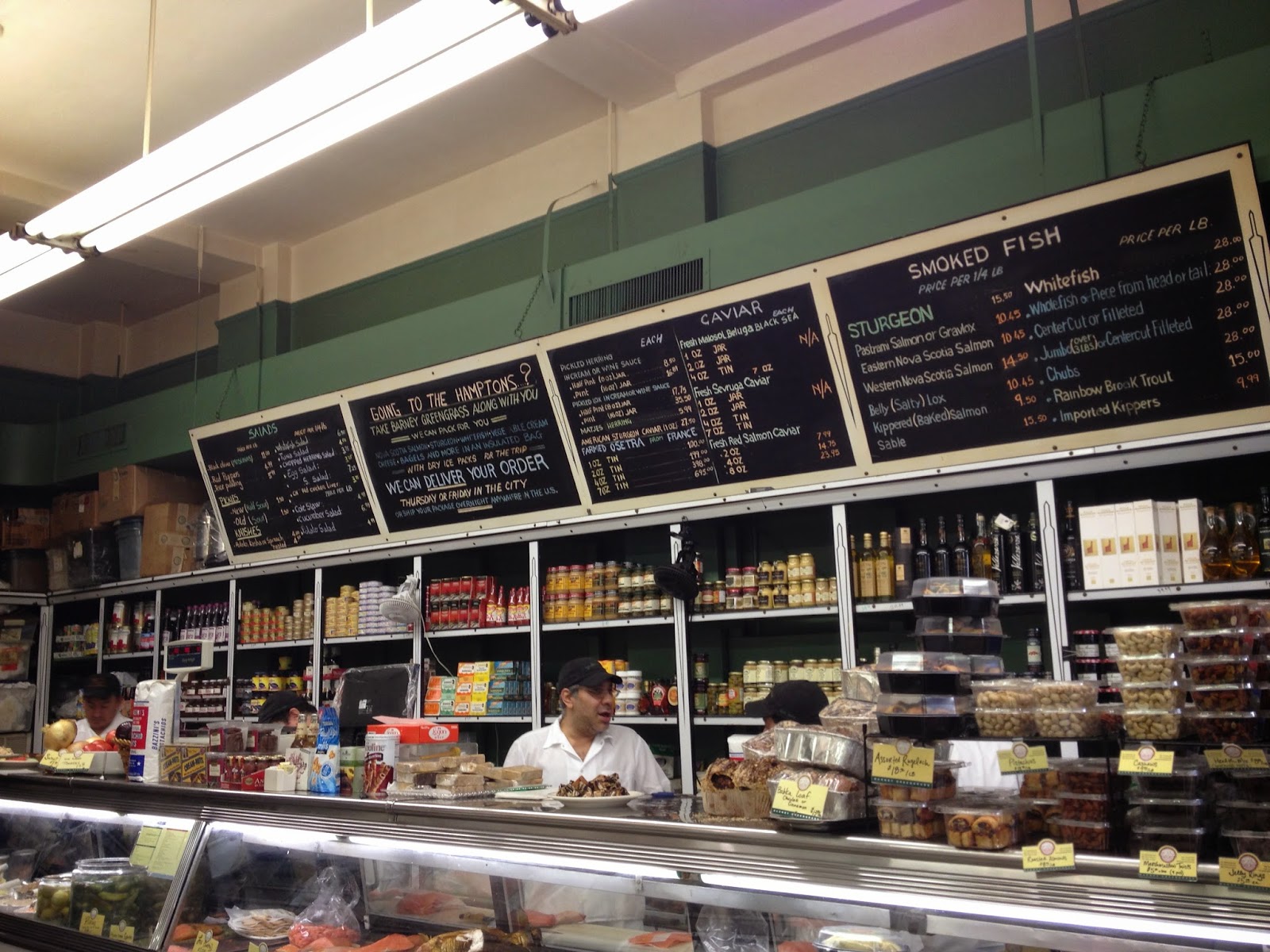 It reminded me, just a little of the gang who regularly met at the corner in Beverly Hills, though our group was less tightly bound and more transient. 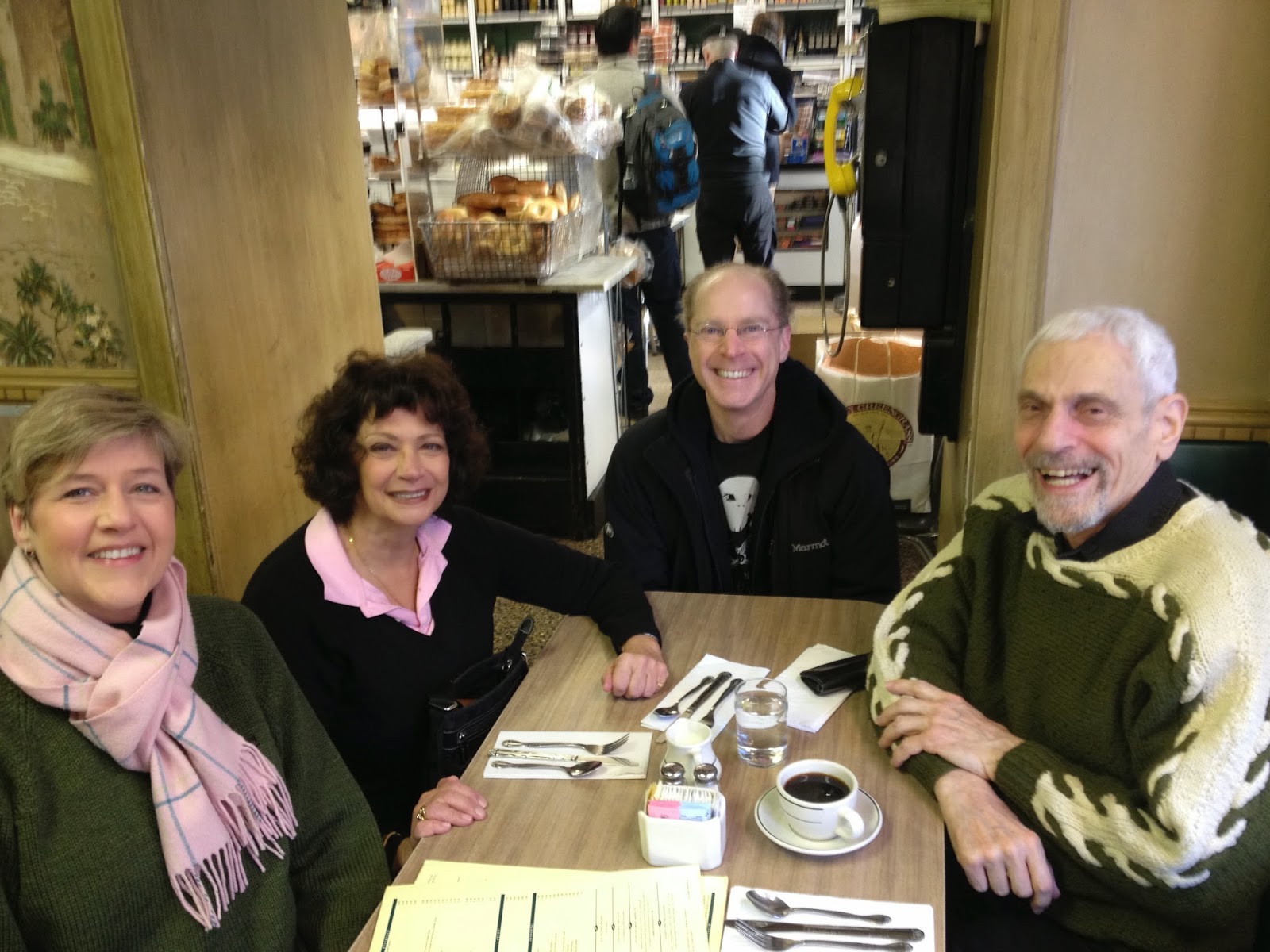 I saw they had homemade blintzes on the menu, so I went for them.  I miss the wonderful ones I had at the Kiev in the East Village.  These were nearly as good.  They were just fantastic. 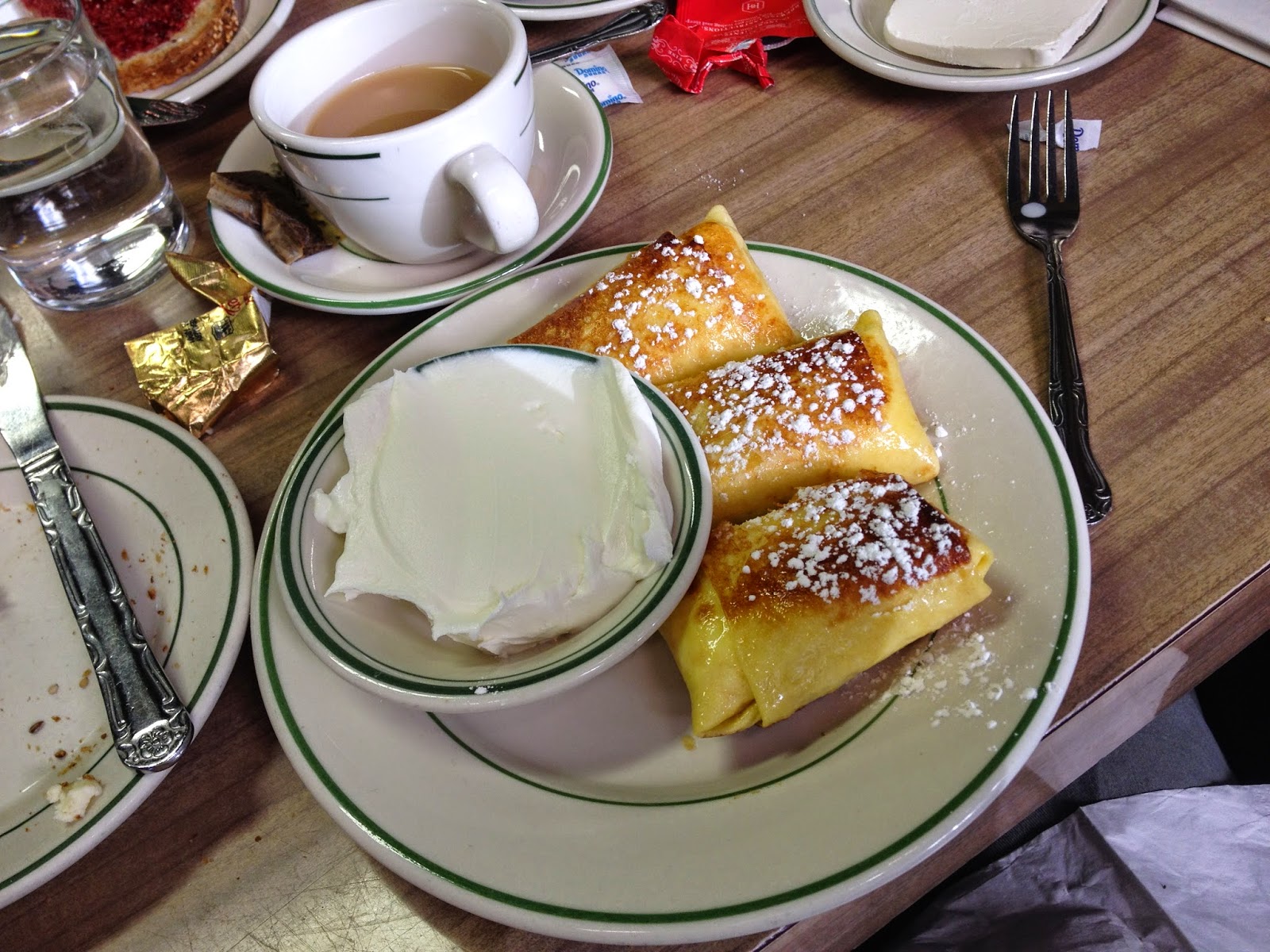 It was still awfully cold this morning, so I had no choice but to wear not only my scarf, but also my gloves and ski cap and still it was cold.  And today was the day that it was going to begin to warm up!

We went to Zabar's and walked around a bit.  I love markets of any kind, so this was definitely a treat for me.  Eventually, though, I left for the crosstown bus to head to the Neue Galerie.  I arrived just before they opened at 11, so and another patron clung to the side of the building to stay out of the wind.  After two minutes they let us in.

The Neue Galerie was founded to celebrate modern art created in Austria and Germany between 1900 and 1940.  Many of the artists, their art, and their patrons were persecuted by the Nazis.  Some of the most famous paintings in the collection were stolen by the Germans and only recently recovered by surviving heirs.   There's no photos in the museum, but I did snap two shots in the stairwell highlighting their special exhibition:  the works of Egon Schiele: 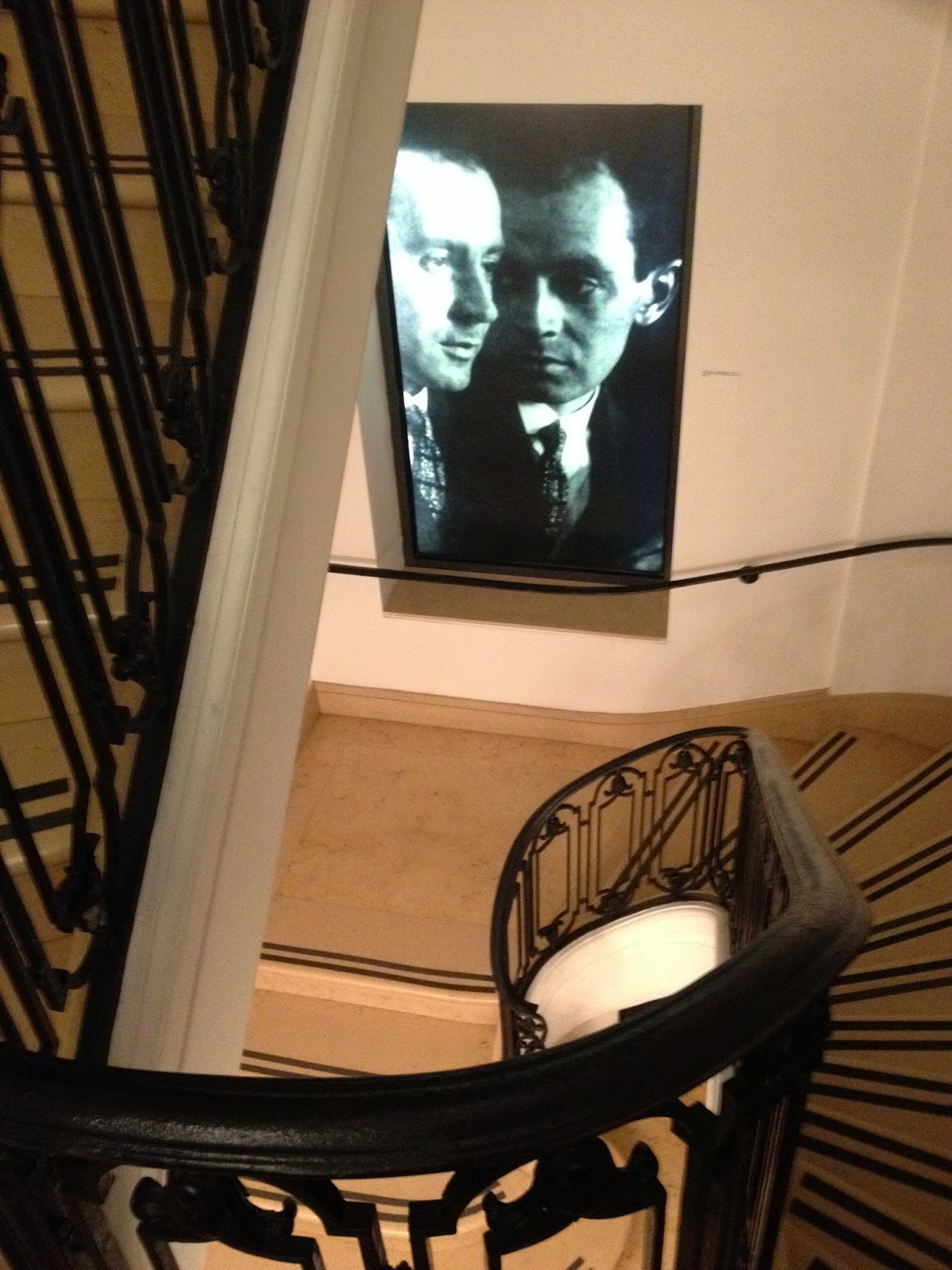 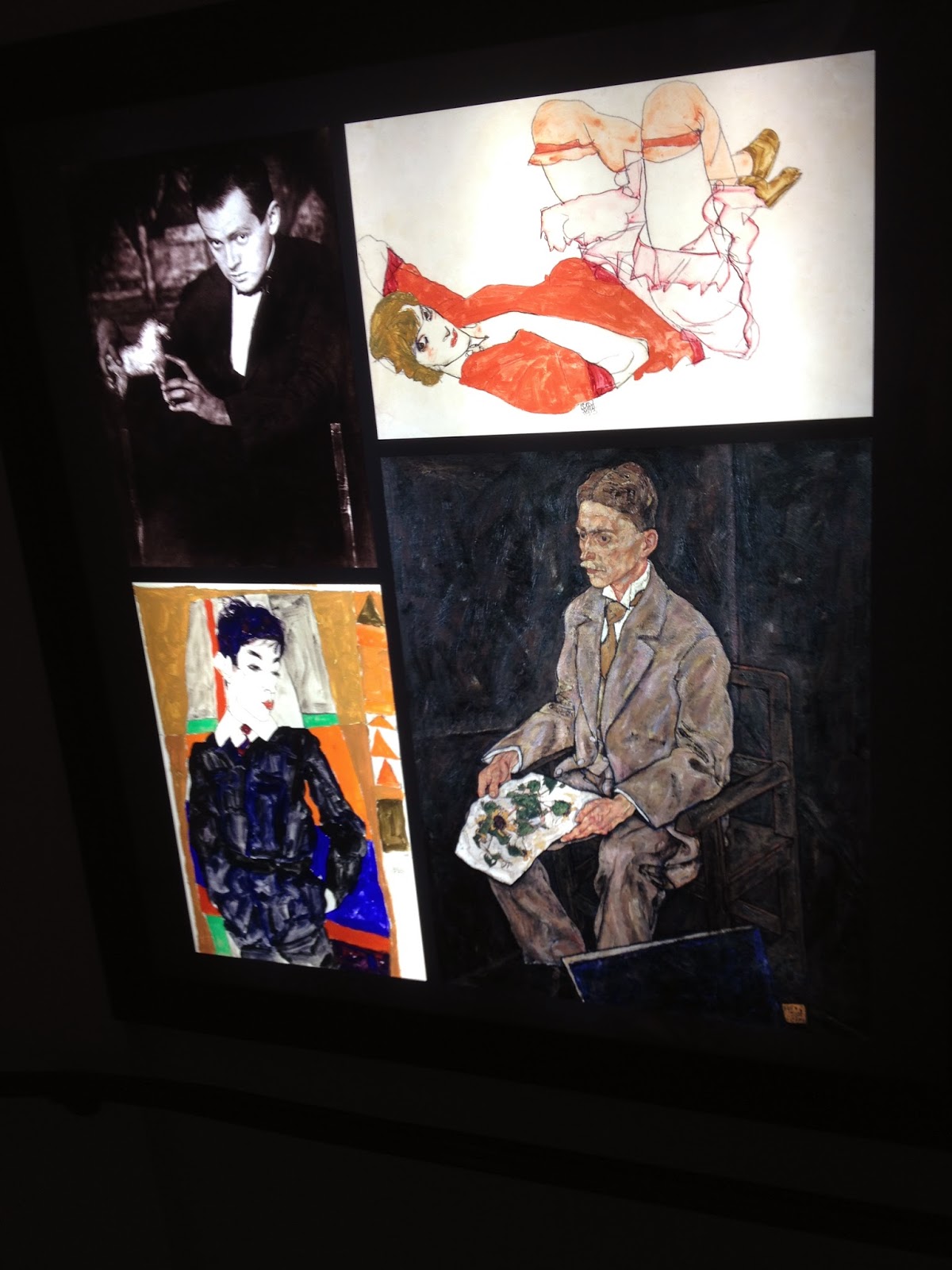 The museum is really small, just three or four rooms per floor, but they have an excellent collection.  The other major attraction is their Austrian cafe:  Cafe Sabarsky.  Like any Austrian cafe, they have the day's newspaper on wooden poles by the door, so I grabbed the front section of the New York Times to read.  I didn't have much chance as the mother and son next to me spoke to me for most of the meal.

They both got the gulaschsuppe, but the spätzle appealed to me: 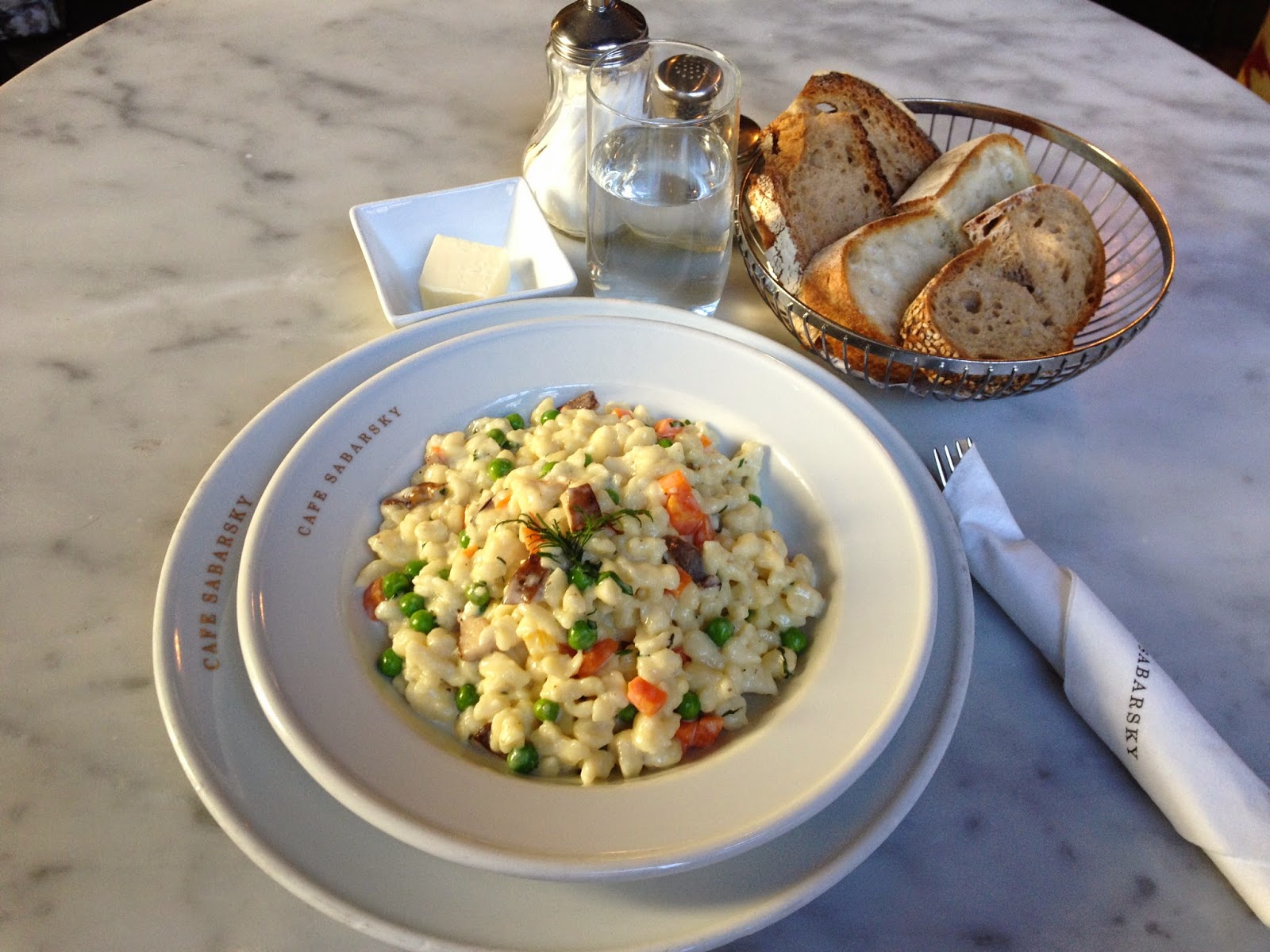 It had vegetables, mushrooms, and dill.

For dessert, I went with the Feuilletine.  which is composed of a variety of layers with a meringue japonais (with hazelnuts) on the bottom, then the layer of chocolate feuilletine, and finally, the chocolate hazelnut mousse. With Schlag, of course on the side, and a Milchkaffee.  It was very, very good. 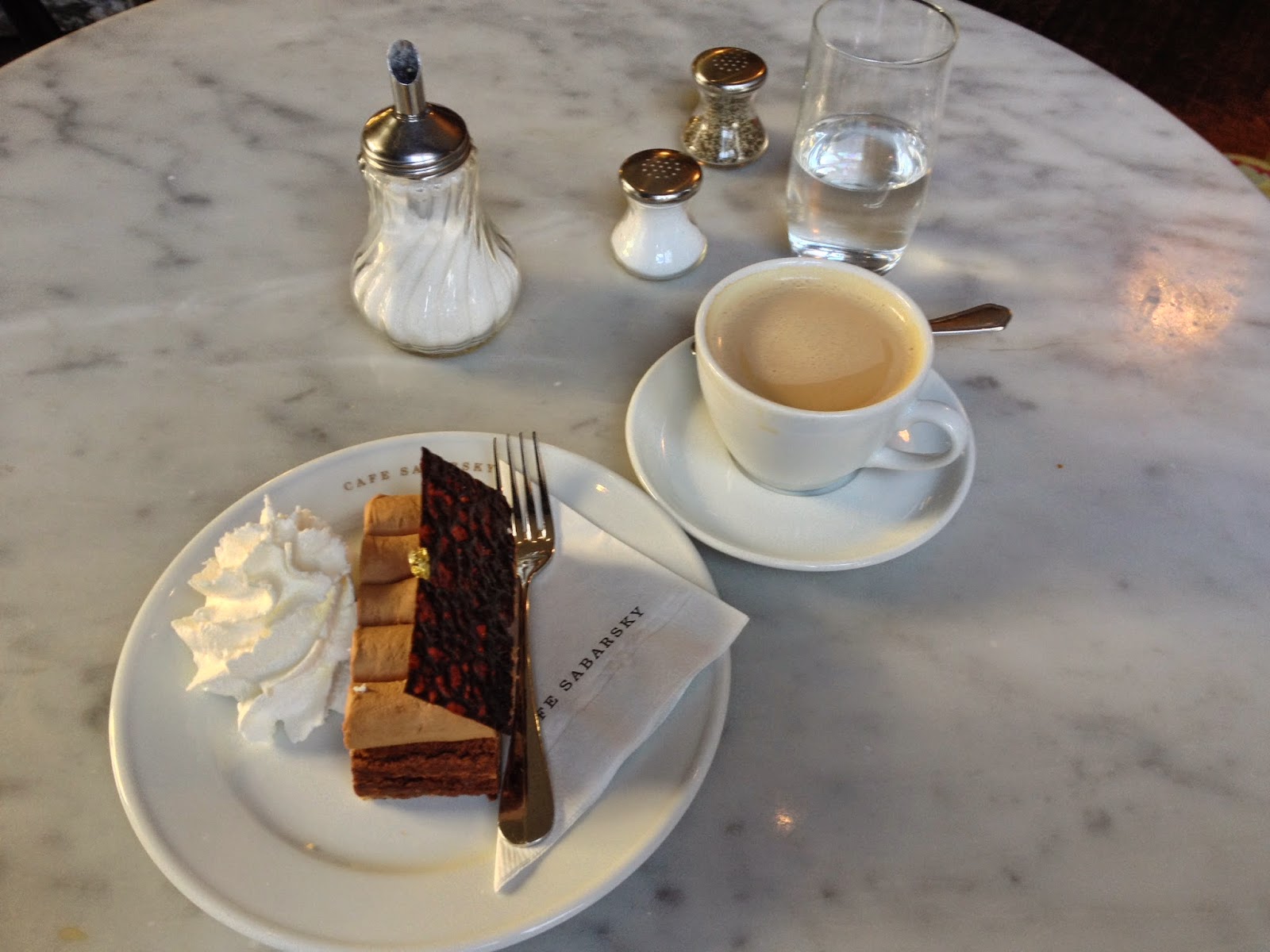 By now it was after 2 pm, so I decided to head down to the Strand Bookstore, one of the last independent bookstores in America.  Of course, that meant having to deal with the subway again.  All day long, there have been delays on the Number 6 line.  "Please be aware that due to a water main break [in the Bronx], there are significant delays on the 6 line today."  I was nearly late for breakfast as our train sat for 10 minutes at the 59th Street station.

One good thing about the subway today, though, was that as I was getting off at 14th Street and Union Square I heard some fun music coming from one end of the platform.  It was a three man band called "Too Many Zooz." I had never heard of them before, but I enjoyed their music and tipped them.  I found out later that they've been written up in several local papers.

On my way to the Strand I passed a great scifi/comix store called Forbidden Planet that I'm sure my niece would love: 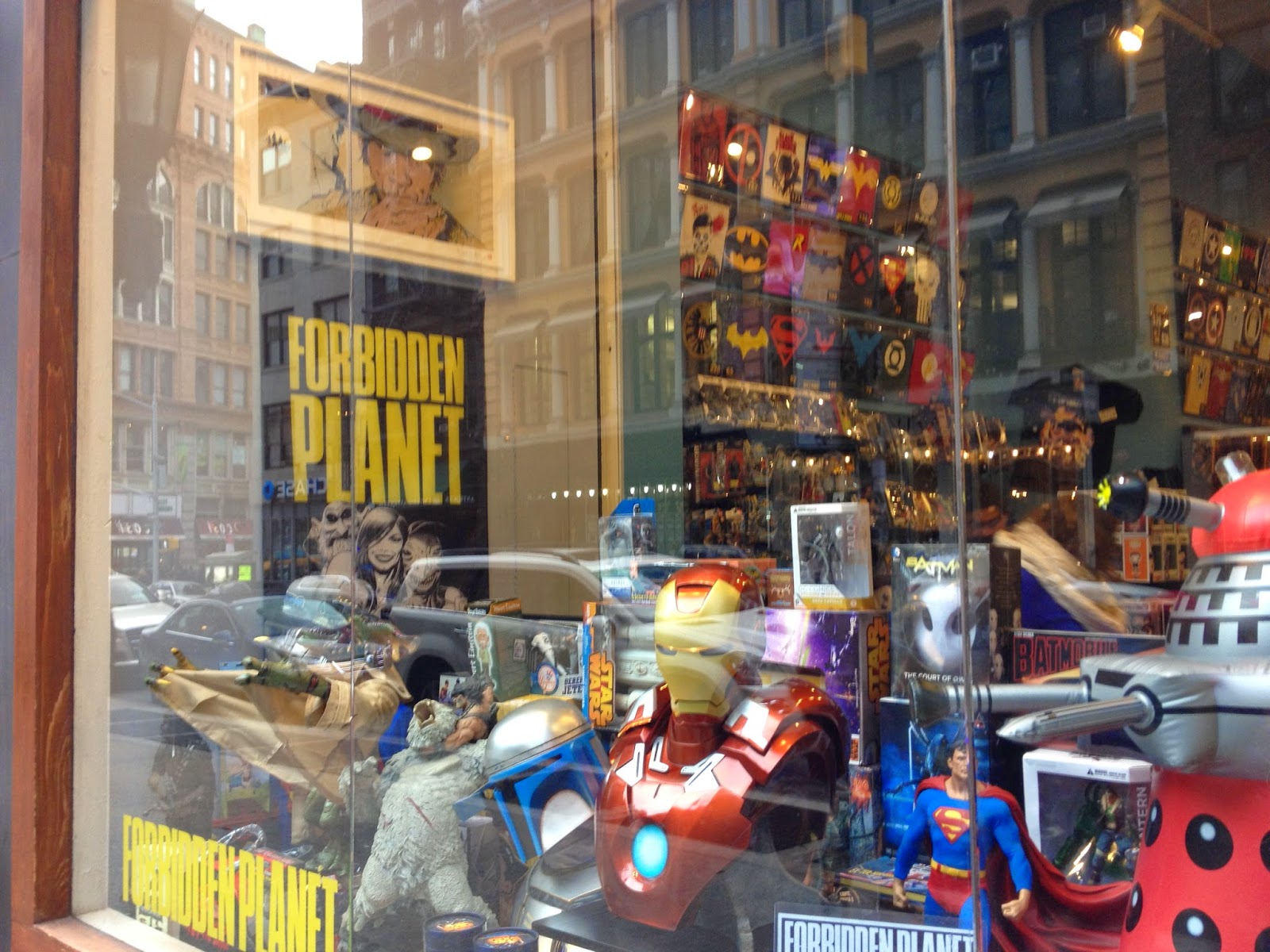 The Strand Bookstore was just two door down from it.  This is a four level bookstore with both new and used books.  On the store's map, the fiction section was marked by the symbol for whale (I assume a reference to Moby Dick).  I bought a collection of short stories by Stefan Zweig to read on the plane.

I headed home when it got dark to plan out tomorrow when I head to Brooklyn.  I decided that after such a rich breakfast and dessert (in both senses of the word), I needed something lighter.   I decided to go to Chinatown and get more of the dumplings I had yesterday.   Unfortunately, Vanessa's Dumplings was full and there were no seats to be had.  I walked next door to Shu Jiao Fu Zhou Cuisine Restaurant, also listed in the guide provided by the Tenement Museum, as catering to recent Chinese immigrants to the neighborhood.  It certainly looked the part. 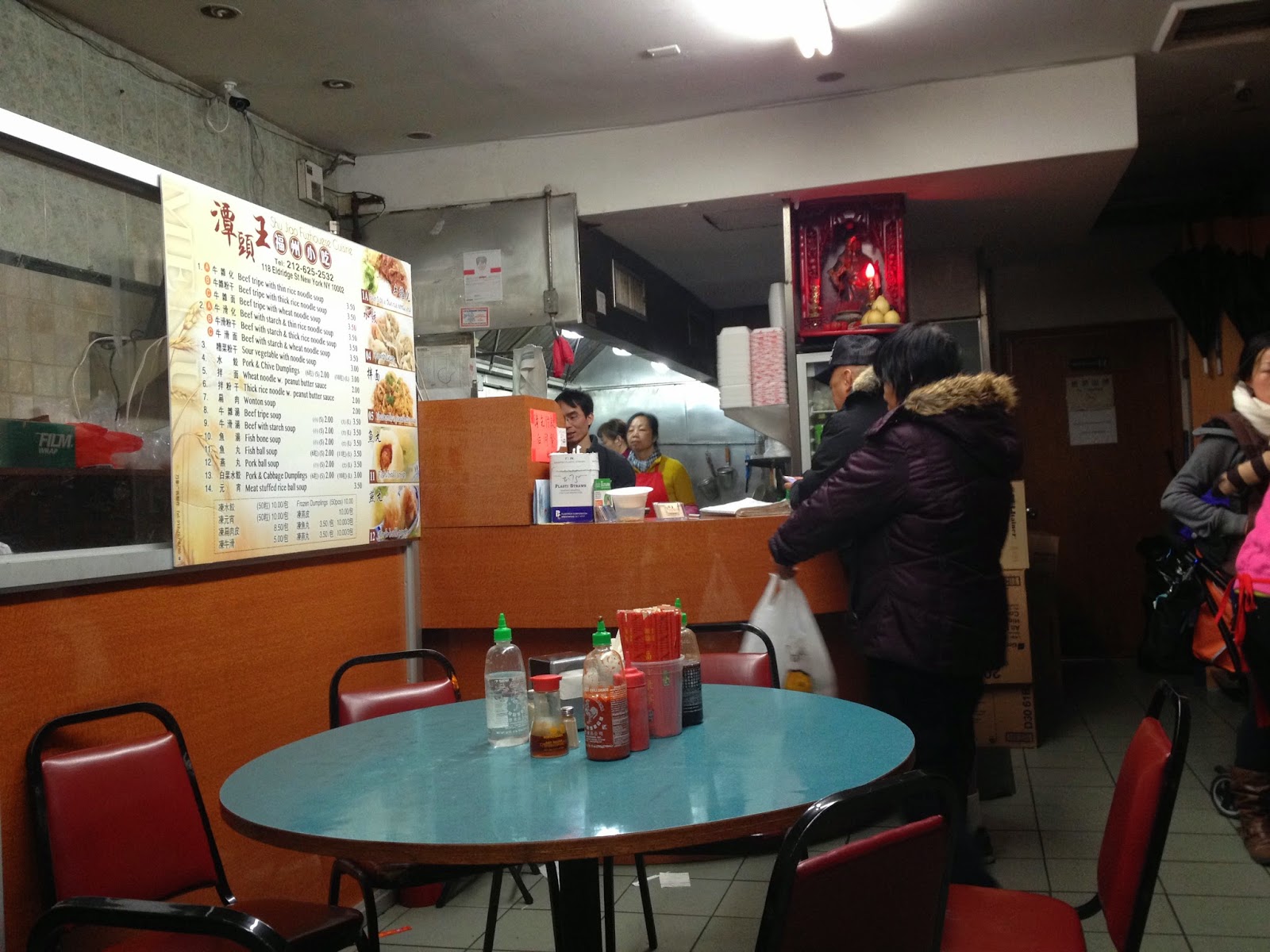 I ordered a small plate of six dumplings and a small wonton soup.  Along with a can of soda, this came to $5.  It was also very good and filling, without being heavy. 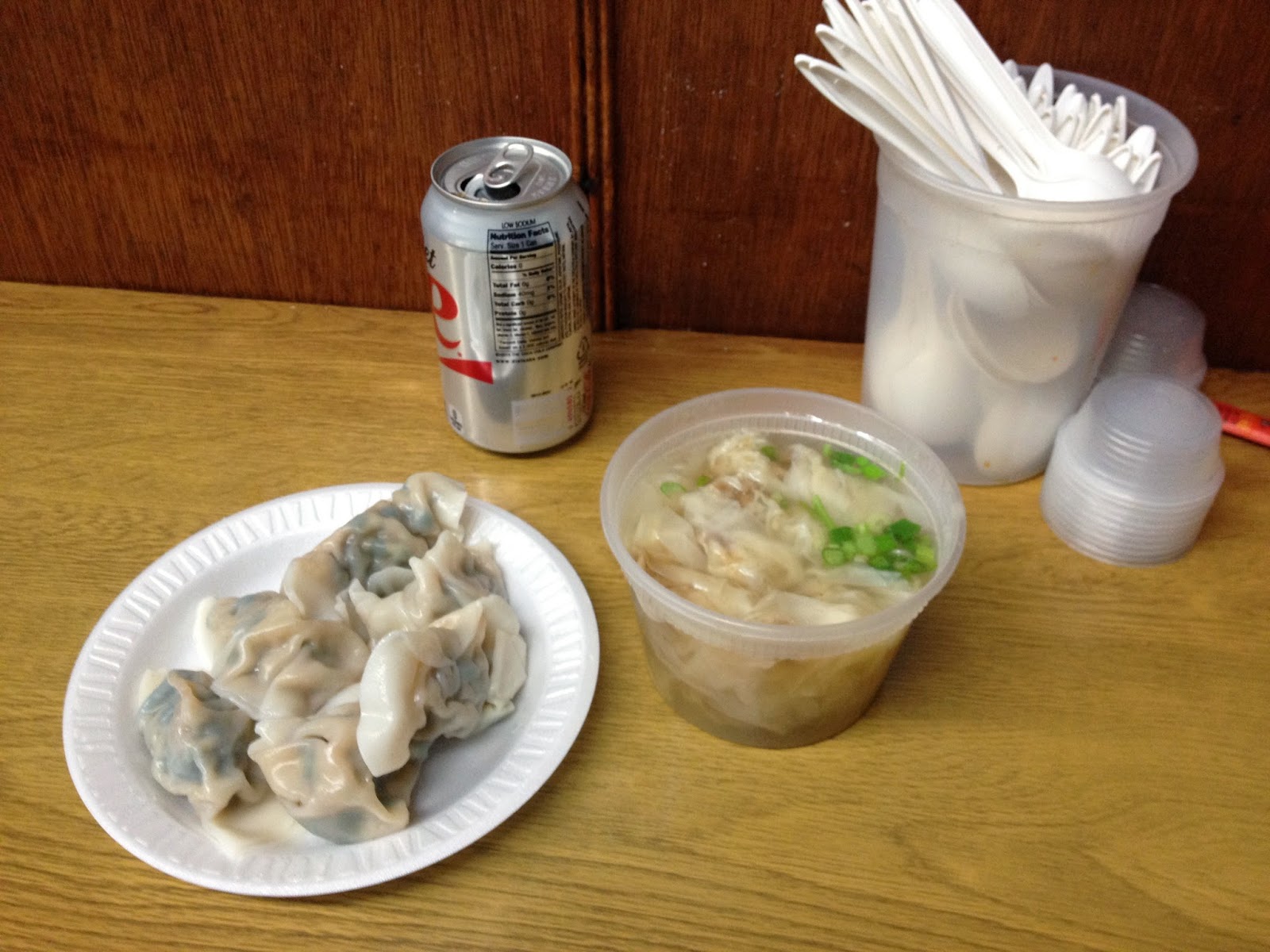 I started off the morning with eastern European blintzes, moved to Austria for a lunch, and then went on to China for dinner.  I decided for dessert to go full circle and return to the bialy shop for a bialy as a snack.  They were just about to close when I arrived but I still had time to buy a bialy.  Actually, she gave me two for the price of one, but I couldn't finish the second one.

After that it was another long wait for a north bound 6 train.  Hopefully tomorrow they'll have fixed the problem.
Posted by J.B. at 7:11 PM