Why I Always Have a Back Up Plan

Not a particularly good day.

It started off well, though.  We all had a good breakfast, checked out of our hotel, and safely made it to the train station.  Not only that, but unlike two years ago, we had no trouble with our seats.  The trouble began here in Budapest.

Even here, things started out well.  The construction work on the train station is done.  We walked out and crossed the street to our hotel.  The rooms were ready and (barely) air conditioned.  There's a new, clean, air conditioned metro line right opposite our hotel.  I bought our metro passes easily.

I keep mentioning air conditioning because it was 90 F today and somewhat humid.

Our problems began when we reached the Great Market Hall only to find it closed.  Back up plan:  go to a cafe in the neighborhood.  Several of us went across the street, where the cafe had fans with cooling sprays set up. 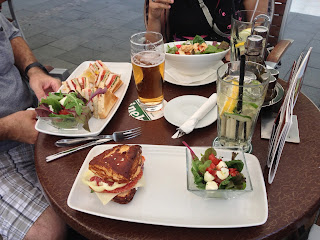 Afterwards we took the tram towards the Chain Bridge, walked across it, and then took the funicular to the top of the Castle Hill. 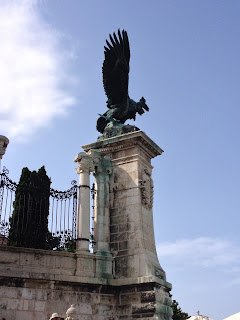 By now, my water was starting to run low, so I just took the students for ice cream at Ruszwurm, the oldest sweet shop in Buda (1827) and then we bought water bottles.  I just wanted to make sure no one got dehydrated.

We headed over to the Fisherman's Bastion for the view, took lots and lots of selfies and group photos. 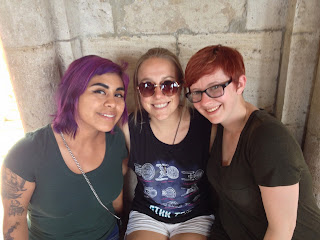 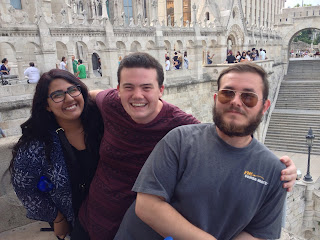 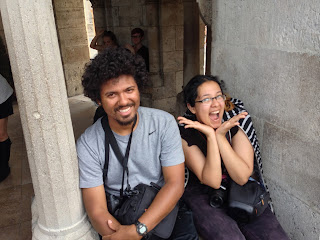 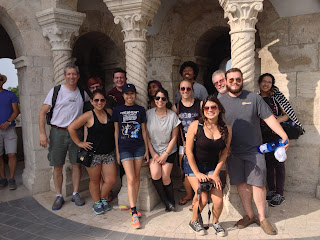 Then with the students melting in the heat, I took them back to the hotel. 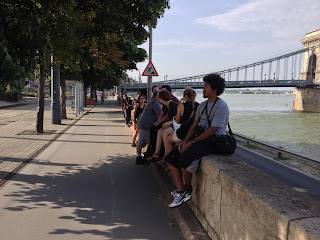 Waiting for the tram. 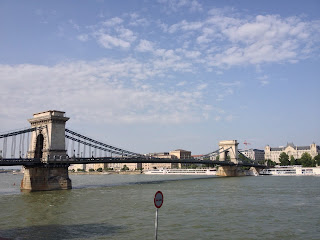 The Chain Bridge from the Buda side. 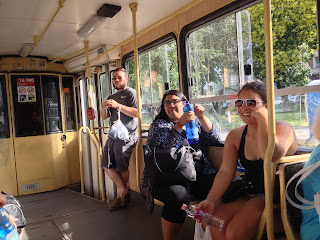 I figured I would buy the train tickets for Warsaw and then join them for dinner in the hotel with the good news that everything worked out.  If only.

The remodel of the train station includes International Travel, but it's not as nice.  It was quite full, much fuller than I had seen it two years ago.  I drew my number and saw that there were 40 people ahead of me. 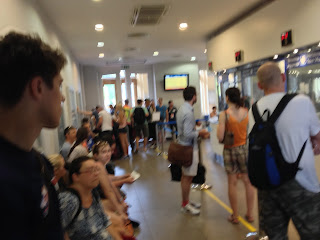 The room was hot, humid, and full of tired and angry people looking for a way out of here.

When my number was called, I went up and asked for 14 tickets to Warsaw, for Tuesday night, on the sleeper train.  The clerk sort of harumphed and said, you've waited so long to buy the tickets it will be expensive.  I pointed out that I had tried to buy them in advance, logging on to the Hungarian website twice a day for 7 weeks.  I was told the tickets could not be sold as the tracks were being worked on. When the tickets finally became available two days ago, I tried to buy them but the system wouldn't accept my credit card.

I booked 3-bed sleeping compartments from Vienna. The train is faster so it leaves two and a half hours later than the one from Budapest.  I then booked a group ticket from Budapest back to Vienna.  Total cost:  $156.70 per person.  I thought that for $18 more per night, it was a good deal to be able to sleep.  Luckily I had some cushion in my budget, but this means that the only remaining meal I can buy the students is the final, farewell dinner in Krakow.

I should add that when I went back tonight to book the tickets to Vienna, the clerk (who looked like the stereotypical Communist-era bureaucrat) made nasty noises about how I should have booked a group ticket through the main office.  In the end, though, she sold me the tickets and that's all that matters.

Tomorrow's weather looks to be as awful as today's.  The weather should finally break tomorrow night.
Posted by J.B. at 1:59 PM