The train ride on the sleeper car was far more restful than being in a couchette.  Still, arriving in Warszawa Centralna station is no picnic.  After four years, they continue to renovate the station, which resembles more of a labyrinth that a transportation hub.  Most of the main hall is taken up by construction equipment.  Nonetheless, I got some złoty in no time and bought the 14 day passes for the transportation system.  A few minutes later, we headed to our hotel. 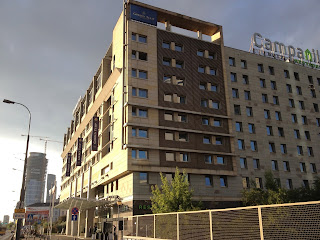 The students love the hotel; in fact, I think it's their favorite hotel since Dresden.  Since we arrived at 8:45 am, we couldn't check in, which made them sad, but then I told them they could have breakfast, which made them very, very happy.  They were very satisfied with the breakfast buffet (except with the scrambled eggs, which were very, very runny).

After they ate and relaxed, we headed out to walk through the former Jewish ghetto, while keeping an eye out for an ATM for them to get money.

Our hotel is a few blocks from the southwest corner of the ghetto (which took up a hefty chunk of Warsaw).  At its height, over 450,000 people were crammed into its borders. 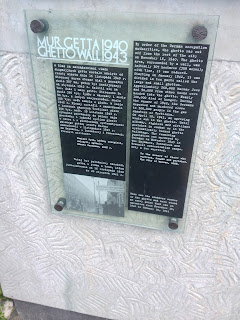 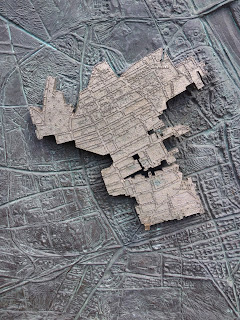 I can't insert an arrow on the photo, but if you look at the lowest left corner of the ghetto, that's where we were, and if you follow that diagonal road south and west, you'll come to an intersection with several other streets:  that's where our hotel is located.

A short distance away are two surviving fragments of the Warsaw Ghetto wall. 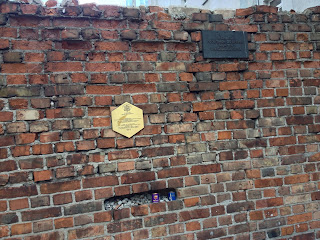 Both these pieces of wall survived because in November 1941, the ghetto boundaries were reduced and they were excluded from the ghetto.  As a result, they were not burned and destroyed with the ghetto in April 1943.  They also escaped destruction in the Warsaw 'Rising of 1941 and a man living adjacent to one of them stopped the city from tearing it down under communism.

I went looking for the tenement building from the ghetto that also survived, but now it's covered in scaffolding as they renovate it.

We had tickets to the 1:15 entry to the new Polin:  Museum of the History of Polish Jews, but the students were still very full from lunch.  I found the science fiction/fantasy cafe Paradox, around the corner from the Jewish Museum, and we stopped for drinks and to use the bathrooms.  Many of the students got a kick from the decor. 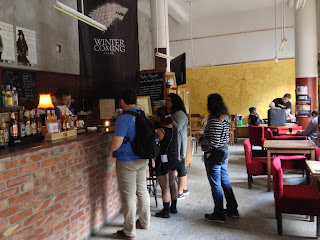 It's a real short walk to the museum, and I was anxious to finally see the new exhibits.  I was amazed at how much material they crammed into such a small space.  They manage to cover over 1000 years of Jewish history, including many, many major issues (e.g., economic relationships between Jews and the Polish nobility, the rise of Jewish printing and talmudic culture, the emergence of Hasidism, the Vilna Gaon, and  the Jewish Enlightenment.   And that's only part of the first half of the museum! 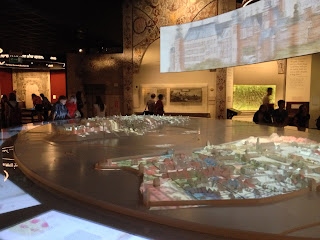 The students commented afterwards on how much text there was in the museum, and it's true, of course, Jews have a strong relationship with texts and the written word.  The museum reflects that value but looks for ways to engage with text beyond static readings.  There's an effort to include a lot of interactivity in the museum's design.

In many ways, the museum's crowning jewel is their reconstruction of the polychrome interior of a Polish wooden synagogue.  The Nazis burned them all down, but using photos and paintings, they've reconstructed what one looked like: 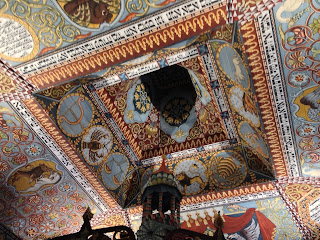 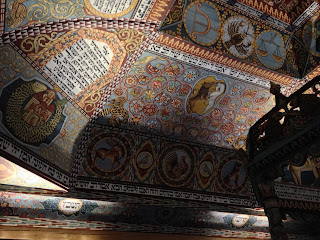 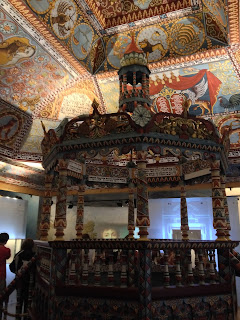 When I reached the section on the nineteenth century, I was particularly delighted to see a panel on Zelig Slonimski and his Hebrew-language journal of science, Ha-Tsefirah.  I published an article on this journal's coverage of science a few years ago, and I was both surprised and happy to see the organizers sought fit to include an exhibit on him. 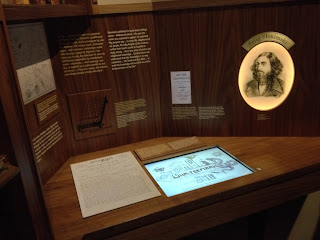 Reaching the twentieth century, though, the museum understandably takes a much darker turn.  After such a vibrant and active community, the increasing bitterness and hatred comes as a shock.  I guess that speaks to the museum's design that emphasizes the earlier harmony between Jews and Poles (or at least the Polish nobility).

After we left the exhibit we discussed it for a while and then headed back to the hotel to check.  My room is just the way I remember it.  It's bright, clean, and well organized. 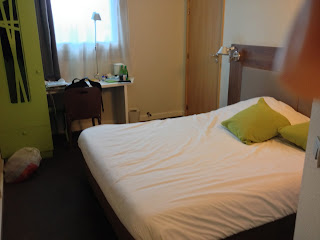 The bathroom is nice too: 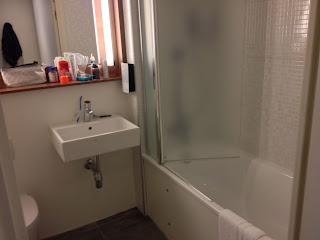 After hunting all over town for an International New York Times I had to settle for Tuesday's paper.  I headed over to Zapiecek, which is a kitschy, "grandma's" restaurant, with a heavy emphasis on pierogies.  I ordered a sampler platter and some beer and went to town. 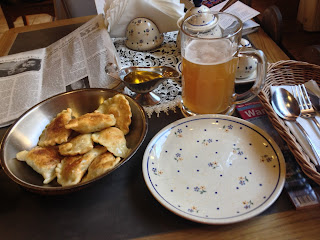 Afterwards, I headed up Nowy Swiat street to Cafe Blikle for dessert.  I took a seat in the sidewalk part of the cafe and enjoyed the view of the streetscape at sunset. 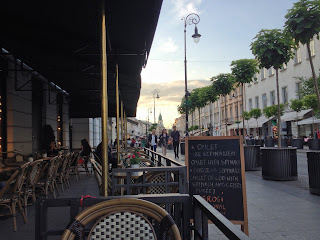 I had originally intended to order the Napoleon, but then I saw they had sernik on the menu and decided to get it instead. 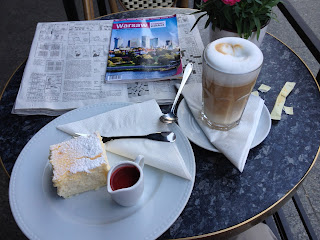 Sernik is a Polish cheesecake, and I really liked the one I had at Sacha Finkelstajn in the Marais of Paris last November.  This tasted identical.

While American cheesecake is made with cream cheese and has hints of lemon, this is a much lighter, slightly grittier and less creamy cake, with the distinct perfume of orange zest.  This matches nicely with the little pitcher of homemade raspberry sauce.  A very good dessert and a good end to a very long day.