A Rainy Day in Krakow

Yesterday, a student asked why Krakow is my favorite city in Poland (Zakopane and the Tatras are my favorite region).  I told her that it was because Krakow was the least Polish city in Poland:  it's the most diverse, most education, most liberal, most open, and least parochial city in Poland (at least in my experience).  The more I think about, the more I think that Krakow is a little bit like what Prague was in the 1990s:  a beautiful but inexpensive city where you could hang out in fun clubs, drink cheap beer, and city great art and architecture.  It's only a matter of time before the British stag parties arrive in force and ruin for everyone.

Our hotel has lots of charm and is (mostly comfortable).  The breakfast room is really interesting and kind of mashes up the 19th century furnishings with a (very) eclectic set of 20th century art. 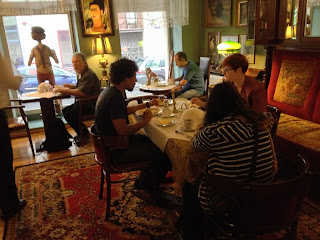 The rooms have the same old, heavy furniture.  The beds aren't the most comfortable, but it is clean and affordable and well situated.

Our goal this morning was the Schindler Factory.  I wanted to arrive before the buses, but that didn't happen.  At first, it looked like they would delay our entrance until 1:30 pm, but we only had to wait about 15 minutes until the first group of school students cleared the entry exhibits.  Most of us went to watch the film about how the enamel factory worked and how Schindler protected his workers. 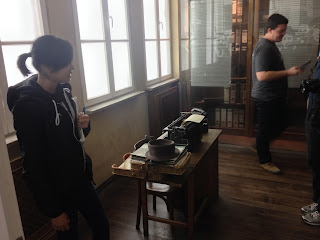 The museum didn't like me talking to people.  I was letting the students move through at their own pace, the way I usually do, only answering their occasional questions.  I ran into some Israeli women, so my voice might have gotten a bit louder and this attracted the guards/docents' attention. When a student came up to me to ask why they had newspapers on sticks, I was trying to answer when the guard/docent interrupted and told me that only official guides could explain.  I told the student to ask the guide/guard/docent and he stumbled through an incorrect answer.  I gave the student the proper answer afterwards (in cafes, newspapers on sticks were available to patrons to take to their tables to read, but they had to return them afterwards).

After we left it started to drizzle again, so we went to a rather old-fashioned restaurant near the Heroes of the Ghetto Square.  It's like a milk bar in that you pay and order and the register and the food comes through a pass through to the kitchen and is then brought to your table.  I ordered the stuffed cabbage. 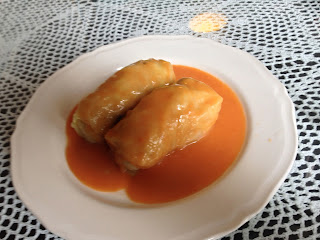 It was fine.  All it needed was salt.  And pepper.  And spices.  And maybe just a little meat.

I had bought a combination ticket with Pharmacy Under the Eagle, which was a pharmacy that operated in the ghetto.  The non-Jewish pharmacist refused to abandon his Jewish patrons and the exhibit is set up to highlight his work.

There are two fragments of the original ghetto walls.  This is the second of the two: 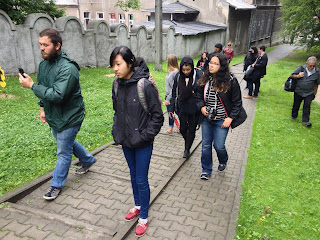 The walls were designed to look like Jewish tombstones.  This one is adjacent to a children's playground.

Since the weather was still cooperating and wasn't raining.  We headed toward the remains of the Płaszow slave labor camp.  For the last several years, the former house of the camp commandant Amnon Goeth was on the market for sale.  It's now been sold to "developers" (that's all they could tell me): 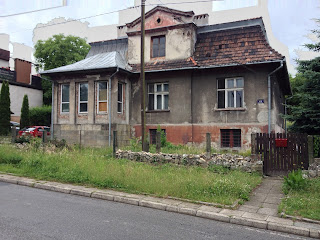 It started to drizzle as we left the camp and headed back to the Old City, but that soon stopped.  I managed to buy a paper and drank some coffee off the main square.  Walking around, I saw the Jageillonian University where the professors were arrested in 1939 and all sent to concentration camps for trying to teach their classes (most quickly died). 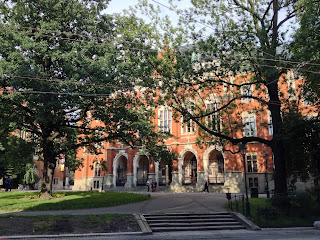 I went off to dinner in Kazimierz.  This wall art seemed to say everything that needed to be said. 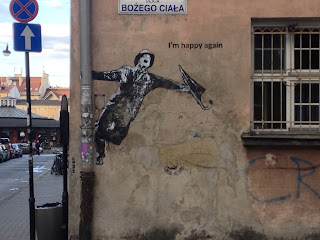 I tried a new restaurant:  Bombonierka.  The food was excellent.  I very much enjoyed the amuse buche of pate and horseradish mixed with cranberry sauce.  My first course was onion soup with cheese and croutons. 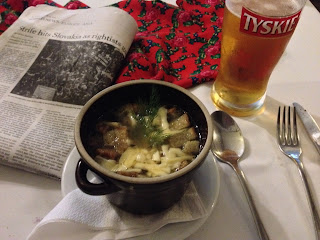 My main course was duck roasted with onions, apples, cranberries, and marjoram, served with spinach (which turned out to be creamed) 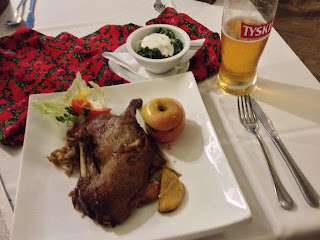