Today had a lot of near misses.

First off, after we left our hotel to go to the train station, one student realized she forgot her camera in her room.  I told her we were taking the 8:46 train to Vienna and she should meet us on the platform, only when I got to the station I realized we were on the 8:42 train, and that the board listed it's final destination, Graz, not our intermediate stop of Vienna.  I had one of the students text her the correct info.  She came running up with only a minute or two to spare.

On the train, one of the students told an amusing story involving the bidet in his room.  When he saw it, he thought "how nice; the hotel has provided us a place to wash our clothes."  He was scrubbing his socks in it when his roommate came in and asked him if he knew what that was for.  "Washing clothes, right?" he asked.  The other student said no, and left.  The first student demanded to know what its real purpose was and when he heard sighed "those Europeans!"  Then he rewashed all his socks in the sink.

When had no problem reaching our hotel or checking in.  I've stayed here before in 2010 and I like it.  The building goes back to the 18th century, though the rooms and service resemble that of the 1950s (except for the flat screen tv).  One of the students told me tonight, though, that she thinks it's haunted.  Why? I asked.  Because it's so old, she said.

We had lunch at Trzesniewski's Buffet near Stephansplatz.  It's not so much a typical Viennese restaurant as it's a Viennese institution. 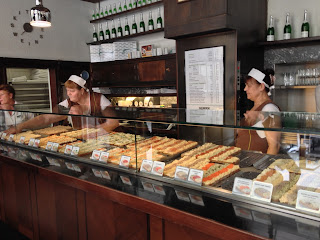 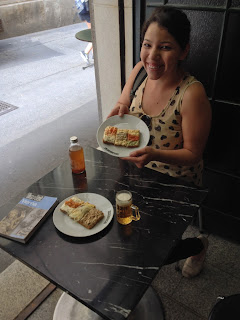 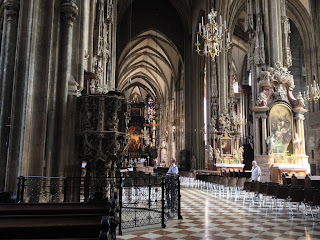 For the first time, they've introduced a charge to enter the main sanctuary (though you can walk down the side aisles).   After that we wandered down to the Pest Statue, commemorating the liberation of Austria from not only the plagues of the bubonic variety, but also the Reformation and the Turks (not that they showed any gratitude to the Poles regarding the last one): 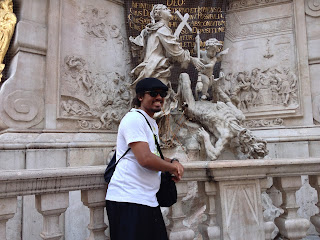 Eventually we made our way to the Judenplatz to see the Holocaust monument there.  It consists of a cube holding thousands books, all facing spines in.  The effect is of a library forever inaccessible whose works are unknowable. 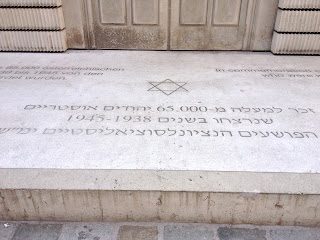 I was particularly struck, this time, by the Hebrew text.  While mostly paralleling the English and German, it contains one phrase missing in the translation:  the curse yemach shemam, may their memory be erased, after the reference to the Nazi criminals.

After walking down to the Danube Canal, we headed over to Hundertwasserhaus, a thirty minute walk away. 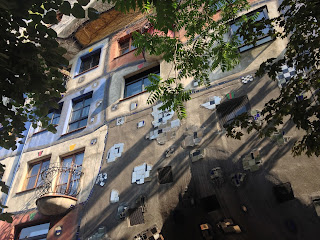 Hundertwasser's buildings and art have a lot in common with Gaudi, but also with Klimt.  While he is sometimes dismissed as "environmental kitsch," I've always liked it and the students seemed to like it too. 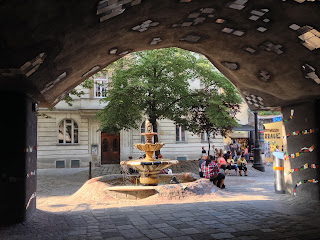 Trying to find our way back to the U-Bahn, we had a second near miss crossing the street as the light turned green for oncoming traffic just as I started to cross.  Luckily no one was hit.  On our way to the U-Bahn, though, a few students fell behind and didn't make our train. When we got out at our stop, I noticed three students were missing.  I immediately turned to their travel buddies (I assigned each student a travel buddy who would make sure they were with us): where are your buddies?  None of them knew.  We waited 'til the next train and two of them showed up (the third went to evening mass).

After all that madness, I treated the students to dinner at  brewery down the street from our (not haunted) hotel.  Called Siebensternbräu, they had many pages of beers and two pages of food.  The portions turned out to be enormous.  I could barely eat half my Käsespätzl: 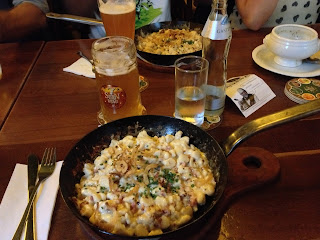 Some students had the "Mexican ribs," while others had the schnitzel.  All of the plates were unbelievably big. 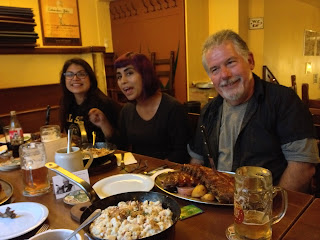 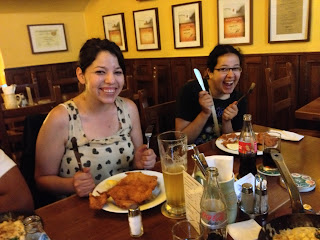 Tomorrow I use my first charter bus in Austria to get to Mauthausen.  I'm just praying I don't lose anyone along the way.
Posted by J.B. at 2:12 PM