The Long Legacy of Totalitarianism in Berlin

In some ways, today involved even more walking than yesterday.  After finishing breakfast, we headed down to Potsdamer Platz and from there walked to the Topography of Terror.  This is the former location of the headquarters of the Gestapo.  It's also right up against where the Berlin Wall used to run.  There's a preserved segment of it here, though tourists keep chipping away "souvenirs."  I told the students if they really want a piece of the wall, find any old piece of concrete lying on the ground and then pass it off as a piece of the wall; no one can tell the difference.

After watching a short film on the site, I talked for about half an hour about how Hitler took the doctrine of Social Darwinism and developed it into a governing policy.  This led to a very unusual governing structure as his underlings constantly competed for power against each other.  I actually ended up talking for about 30 minutes, which is much longer than I've done before in this museum.  Then the students moved through at their own pace.

At first I thought we would get some food on the street, but the prices in the cafe were pretty good and at least there we would have places to sit. 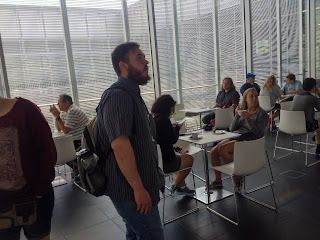 Afterwards, we went to the segment of the Berlin Wall to pose for a group shot. 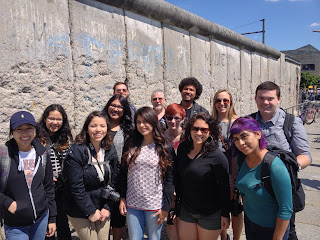 Checkpoint Charlie is only a one-block walk away, so we headed off there so the students could snap shots of the actors dressed like American soldiers wearing historic uniforms.

If the morning was about the terrors of the Nazi dictatorship, the afternoon was about the terrors of the East German dictatorship.  We headed up to Nordbahnhoff station, where we looked at the displays about what happened to the S-Bahn when Berlin was divided.  They had photos of ghost stations and the wall.  I snapped a shot the other day of a photo of the wall sealing off this very S-Bahn station. 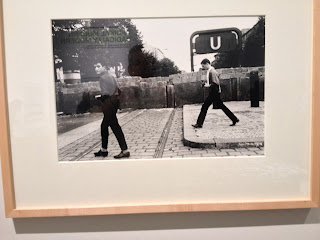 The display on Bernauer Straße charts the history of the wall, the inner wall and the outer wall, the death strip, and the various escape attempts.  For East Germans, the closest they could come to the wall was the inner security wall:

On the other hand, the West Berliners could see the entire structure of the wall complex from their observation post: 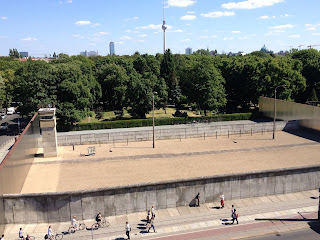 The wall display really brings home, I think, how the damage of the Second World War simply continued in Berlin for another 45 years.

After spending so much time today on the horrors of the past, I thought it might be nice to treat the students to a visit to the Pergamon Museum.  Even with two-thirds of it closed for renovations (including the Pergamon Altar), it still has plenty to amaze.  And who wouldn't be amazed by things like 2600 year-old dragons guarding the Ishtar Gate to the city of Babylon?

Our these lions, guarding the throne room of King Nebuchadnezzar? 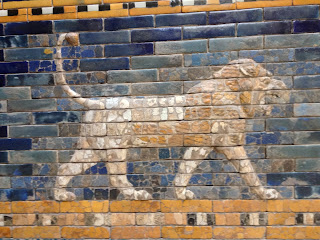 Or the three-story market gate to the Hellenistic city of Miletus? 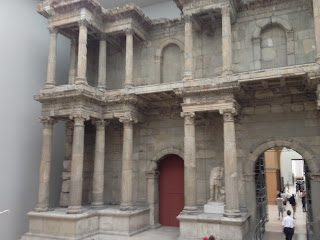 To be honest though, my favorite single piece is an amazing wood paneled room from Aleppo, Syria.  Painted in 1601 for a Christian merchant, the walls are covered in images designed to resemble Ottoman carpets and Islamic book illustrations: 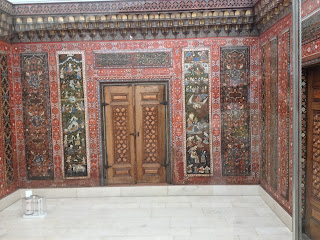 But they also had a stunning exhibit of Islamic art related to depictions of gardens.  Most of the pieces came from the Mughal Empire in present-day India and Pakistan. 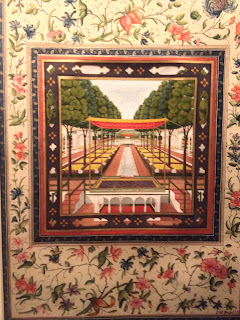 I was really surprised by this illustration since it depicts the Hindu festival of Holi: 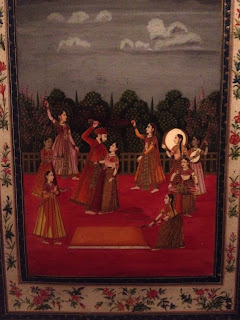 Afterwards, the students all went their separate ways.  I helped a few find some things they were looking for, and then two students and I went to Cafe Einstein on Unter den Linden for some much-deserved coffee and cake.  After all, I have to maintain my daily diet of cake and beer.  Today, I tried the Apfelstrudel mit Schlagsahne and cafe au lait. 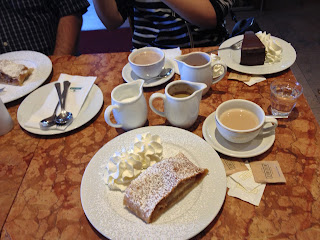 (That's a slice of Sachertorte mit Schlag on the plate of the student opposite me).

By the time we left the cafe it was nearly 7:30 pm, though the sun was still going strong.  I didn't want to entirely skip dinner, so after coming back to the hostel, I walked a few blocks and just had a piece of sausage with vegies (and a beer) for dinner. 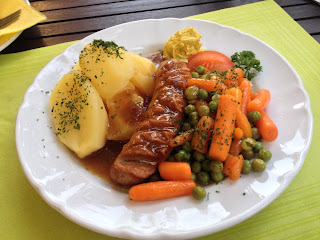 Incredibly, even at 9:55 pm, it's still not dark here in Berlin: 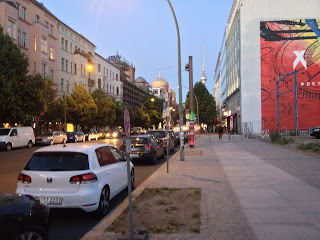 That's our hostel on the right, with the golden dome of the Neue Synagogue in the near distance and the Fernseherturm at Alexanderplatz in the far distance.