This trip to Budapest has definitely had its ups and downs.  Yesterday (Monday), was a good example.

While the rooms at the hotel are comfortable, the food leaves a lot to be desired.  Dinner Sunday night was bland, boring, and the servers totally indifferent.  Breakfast wasn't much better.  They had a machine offering orange and apple juice, but the orange juice tasted like someone had emptied a carton of real orange juice, filled the empty carton with water, swished it around, and then served us that. 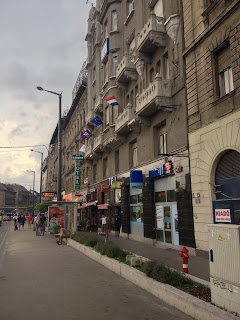 The exterior of our hotel in Budapest, right across from the train station. 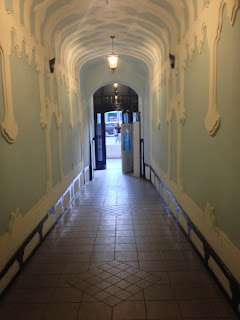 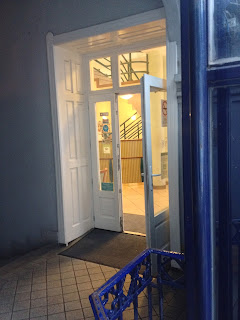 The lobby of the hotel (5th floor) from elevators. 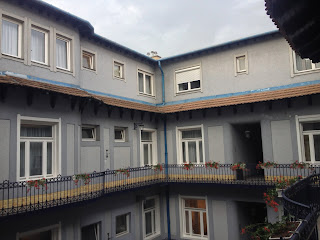 The windows to my room faced a walkway, so I kept them closed unless I was in the room awake.

The weather was a little cooler today when we went to the Dohany synagogue.  They want organized groups to hire a guide and last time the students had a lot of problems understanding him, so I had them buy tickets to tour the synagogue as individuals and then I quietly talked to them inside.

In the memorial garden in the back, an Israeli tour group sang songs, including Hatikvah and El Male Rachamim.  I cried a bit trying to translate the words for the students. 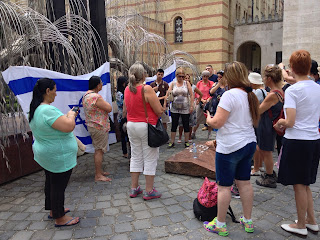 For the first time, I noticed this memorial off to the side of the Heroes' Synagogue.  It's dedicated to Kasztner and Brand, who negotiated with the Nazis to save over 1600 Hungarian Jews.  Kasztner was later accused of being a Nazi collaborator for his efforts to save Jews and was assassinated in Israel. 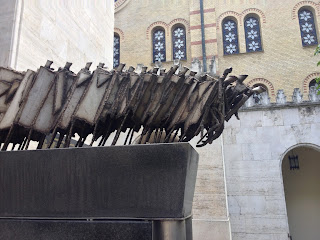 The Jewish Museum in Budapest is small and poorly organized, but I've always been fascinated with this book from a small Hungarian Jewish community.  It shows a local Jew sitting guard over someone who died, the night before the funeral. 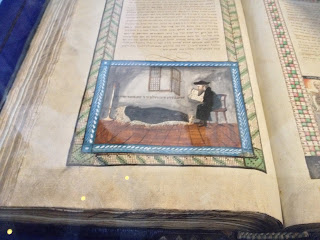 The classic Hungarian restaurant I wanted to go to in Klauzner ter turns out to be closed on Mondays (I'm having very bad luck with Budapest food on this trip), so most of us tried this place. 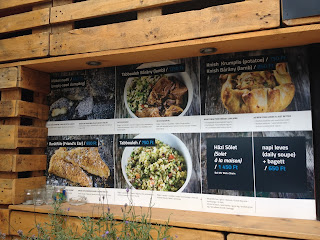 It was so-so.  The best that can be said about the lamb knish is that while it was stone cold, the paprika sauce meant it wasn't completely tasteless. The big news, though, is that the weather finally broke.  We had massive rain, then hail.  We had been eating under this umbrella until they began to take it down to protect it from the hail.  Then we ran for shelter.

Once the weather broke, the mood of the students noticeably improved.   It still was somewhat humid but the drop in temperature seemed to make everyone just a little happier.

Our goal for the afternoon was a visit to the Romedia Project, an NGO (Nong-Governmental Organization) founded over 20 years ago to work on behalf of the Roma, to promote education of Roma, particularly Roma woman, and to educate others about Roma history and persecution.

Their offices are in working class neighborhood on the Buda side, close to the river, in second floor above ground walk up.  We met two of the organizers, one of  whom, Jozef, had just returned from interning in Congress in Washington, D.C.  Kaitlin, who is mixed, Roma and Jewish, talked a little about the differences in how survivors in both communities confront the past.  Jews tend to talk in detail about what happened to them, while Roma survivors often avoided discussing it out of fear that talking about it would cause it to happen again.

In one of the videos we watched, three children bring items to a memorial: a boy brings a stone, a girl a candle, and a girl in the middle brings flowers.  Kaitlin asked if we understood.  The students were silent, so I remarked the stone was a Jewish tradition for marking a memorial.  Yes, she said, and the candle is Hungarian Catholic.  What about the flowers, I asked.  What kind of flowers were they? She asked.  I didn’t know.  The Roma mark memorials with wild flowers.

She also talked about the discrimination and prejudice Roma face in Hungary today and many of the students were surprised to learn of contemporary segregation in education, and the way Roma students are tracked for remedial work.  Afterwards, a few of the students agreed to be interviewed for Romedia's social networking sites: 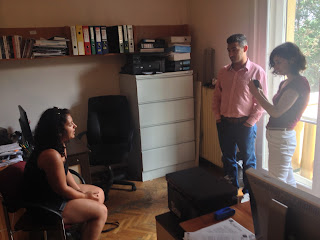 Usually when I'm leading the group, they follow behind me like little ducklings.  When we returned to the hotel, however, I turned around and all but one of my little ducklings was gone.  It turns out that they were so famished from the light lunch and no snacks that as soon as they exited the metro at our stop, the ran off to the McDonald's, Burger King, KFC, and pizza place, all around the corner from our hotel.  As a result, none were interested in having dinner at Bagolyvar, so I picked up a International New York Times and headed over there myself.

I've always like Bagolyvar and it was very quiet that night.  I ended up going with the Hungarian menu (lots of paprika).  That meant a starter of fresh bread, a soft cheese spread with paprika, and gulash. 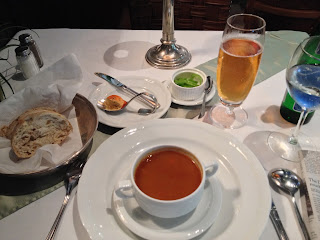 For the main course, I had the chicken paprika.  This means I went all out for paprika immersion.  It was on a bed of potato gnocci, and had some sour cream drizzled on top of the paprika sauce (Hungarian food is very orange): 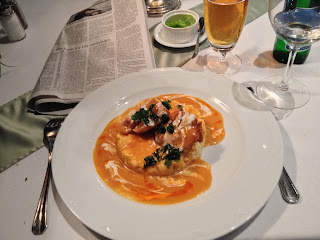 The dessert was Somlói Galuska, a sponge cake soaked in a light rum syrup, with walnuts and raisins mixed in, and then covered in chocolate sauce and whipped cream. 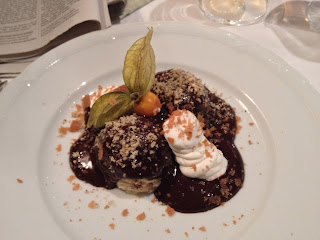 I particularly liked the small orange fruit, which had a very nice, tart flavor.

When I got back from dinner, two of the students wanted my assistance on how to see the bridges over the Danube lit up and night, so I took them down to see the Chain Bridge all lit up. 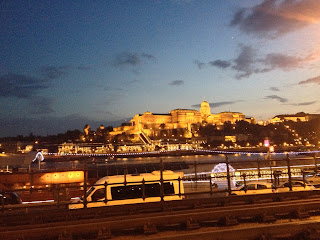 We started by walking along the Pest bank, looking over at Buda Castle in dusk. 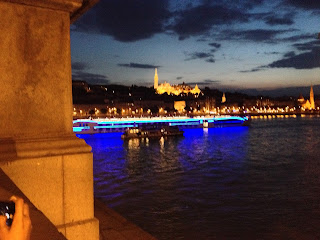 Then there was St. Matyas Church and the Fisherman's Bastion. 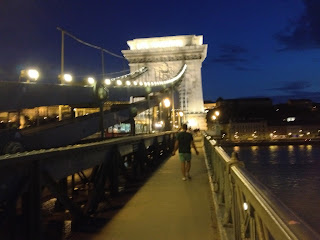 Finally, we came to the Chain Bridge.  This was the first bridge across the Danube, linking to two separate cities, and the first bridge rebuilt after the Germans blew them all up to keep the Russians from crossing. 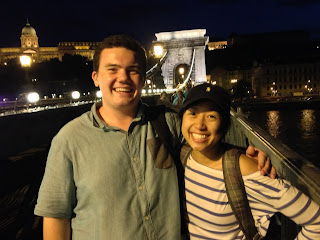 Here are the two students on the bridge, with the castle behind them. 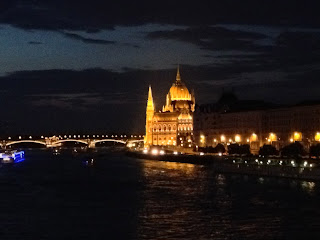 The last place we went was Gresham's Palace.  This incredibly expensive luxury hotel was lavishly restored.  God only knows how much it costs to spend the night. 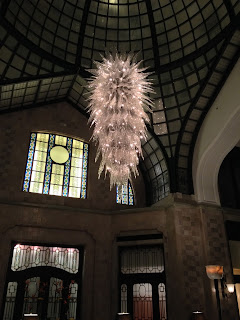