One of the difficulties of keeping up with this blog is that it's usually so late, and I'm so tired, when I have a chance to work on it in the evening.

Our hotel in Prague (Hotel Tyl) is definitely a keeper.  This is the third hotel I've tried with students and the only one worth coming back to.  The rooms are comfortable and clean, with a good bathroom and climate control.  The breakfast is filling and enjoyable.  It's very close to both the I. P. Pavlova metro stop, and to tram lines, so it's very convenient. 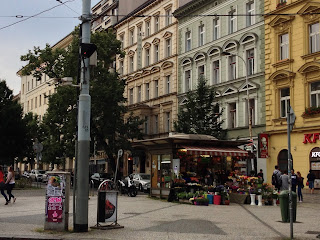 Our hotel is the tan-colored building in the middle. 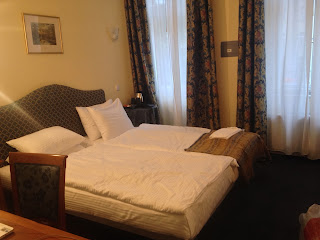 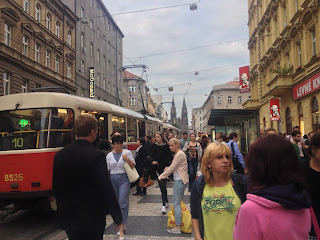 This tram line stop is just around the corner.  The students also like the KFC.

On Tuesday, we took the bus to Terezin.  It was a drizzly morning, though still lighter rain than the thunderstorms the night before.  No problems buying 14 tickets for the bus and getting to the former garrison town, then combination ghetto-concentration camp.

Usually at the beginning, we watch an English-language video about the history of the town and the ghetto, but not this time.  We were sitting there in the dark waiting when finally it turned out that because of an event scheduled that afternoon, their computer system wasn't set up to show it, so I just took the students upstairs to the main exhibit.

It's a pretty good overview of the ghetto and its history.  Many of the images and items are heartbreaking, particularly the information on the children in the ghetto. 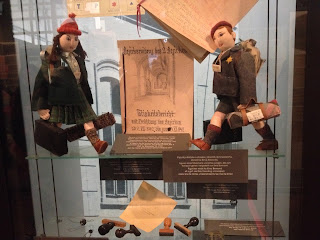 These figurines of children on a transport were made by a girl in the ghetto. 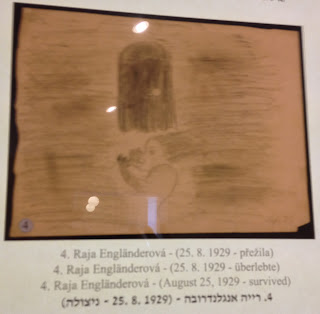 A famous German-Jewish artist, Friedl Dicker-Brandeis, was deported to the camp and she chose to pack her art supplies with her.  In the ghetto, she worked with the children doing art therapy.  Sometimes, she had them draw memories of home or fairy tales.  This drawing depicts one child's fears.  One regret I have is that I didn't let the students spend more time at the Pinkas Synagogue in Prague looking at the materials on display there about her; I had thought that it was duplicative of what was at the Terezin museum, but they had nothing on her there.  On the other hand, we were somewhat pressed for time that day, and any time there would have come at the expense of teaching the students about Jewish culture using the material in the Klausen Synagogue.

Although the ghetto leadership tried to save the children by giving them more food at the expense of the elderly, the majority were still deported to Auschwitz and gassed on arrival.  The drawing above was made by one of the rare children who survived.

One of the things I dread most about going to Terezin is "lunch."  There are no good option.  The museum has what they call a "bufet," but it's terrible. 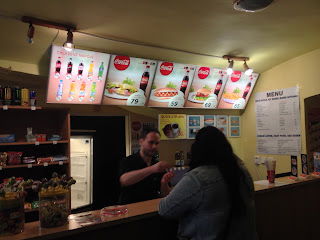 I ordered the "toast," which was sort of like a grilled cheese sandwich, but only had a lot of ketchup added to it.

We then went to the Madgeburg Barracks, where they have a great display on living conditions in the ghetto. 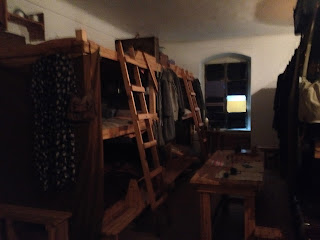 When we went into the room on musicians in the ghetto, they played excerpts from the children's musical Brundibar, whose composer was imprisoned in the ghetto, and which was staged multiple times by the children in the ghetto.  It was composed in 1938 but staged for the first time in the ghetto.  The plot involves two children trying to raise money for food by singing, but are driven away by the evil organ grinder (Hitler - though never called that in the play).  In the end, with the help of animals and birds, they triumph over him.

There's also a very large display on graphic artists in the ghetto (most of whom were murdered after a small portion of their art was smuggled to the Red Cross, which dismissed it).

Then we walked to the Small Fortress and toured the Gestapo prison there. 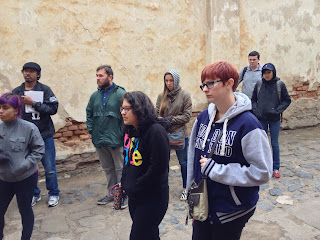 As part of the tour, we went through the old 18th century tunnels under the military fortifications. 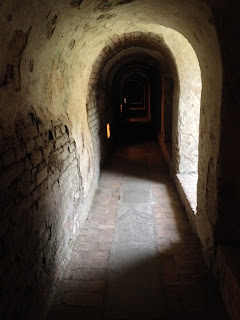 This fortress was originally built to defend the area in case Prussia attacked, but it was never used.

Here's a shot of me on the bus back to Prague: 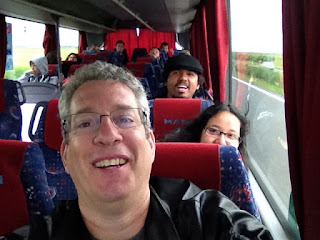 Tuesday night was laundry night, so I took five students to the laundromat, located about 10 minutes by foot away.  It was pretty busy so they combined some of our clothes in one large washer.  It turns out that one of the students and I wear the same brand of underwear in the same size and color, which made it a little difficult when it came time to divide up the now clean clothes, but it worked out.

I went with some of the students to an Italian place recommended by a guy in the laundromat and treated myself to some risotto with fresh asparagus and sea scallops after the terrible lunch earlier in the day. 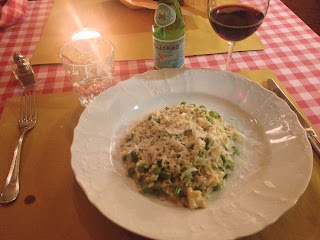 Wednesday we went to Lidice, the remnants of a small town on the outskirts of Prague.  This is a place that is always difficult for me to get to and yesterday was no different.  I had downloaded bus directions but when we got to the stop, there was no bus stop.  I walked the four block perimeter, asked a bus driver, asked a transit person in the metro stop, but still couldn't find it. Finally, a commuter explained that when they opened the extension line on the Metro in April, our bus stop moved two metro stations further out.  We got back on the metro and found our the correct bus stop almost immediately.

One reason I didn't give up is that students regularly describe the memorial here as the most moving of the trip.  In May 1942, Czech snipers assassinated Reinhard Heydrich, the "Protector of Bohemia and Moravia," in Prague.  A few days later, on June 10, 1942, the Germans decided to destroy Lidice as collective punishment.  As it happens, we were visiting on the 73rd anniversary of the murder of the town.  I couldn't understand why the museum was so crowded until one of the students pointed out the date to me.

The museum provides a very effective and moving overview of the town, its inhabitants, and what happened to them on June 10th, 1942.  Perhaps the most moving are the postcards sent to relatives by the children after their deportation to the Lodz ghetto and prior to their murder in Chelmno.

The monument to the murdered children always has many toys and candles in front of it as offerings. 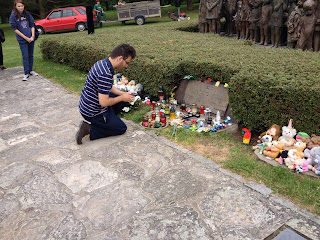 The grounds of Lidice are quiet and peaceful (except for the lawn mowers); it's laid out like a park (or cemetery): 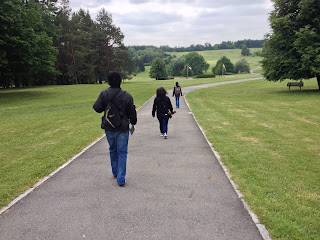 After killing the men and most of the children, and deporting the women to a concentration camp, the town was burned, then demolished, and the rubble dumped in the river.

We talked for a while about how the memorial was designed and how it affects visitors.  One of the reasons students find the memorial so moving is that the numbers are so small.  We are more capable of grasping the murder of 100 children than the murder of 1,000,000.

After deciphering the bus schedule: 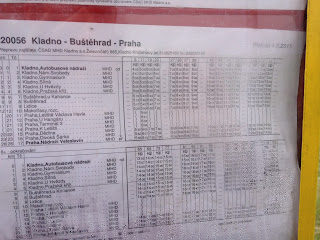 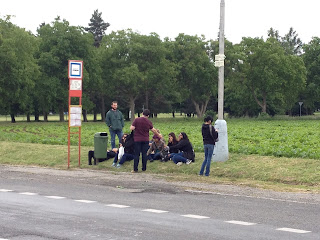 [There are more students than these; the rest were sitting on benches out of view]

The students had the rest of the day free.  I wanted to visit the remodeled Museum of 19th, 20th, and 21st Century Art, so I and a student majoring in art and photography went.  We first had lunch at one of my favorite restaurants in Prague:  Cukrkavalimonade.  It's too small to take the whole group, but it was fine for us.

I decided to go "healthy" with the savory spinach crepe, along with a large glass of their homemade elderberry lemonade: 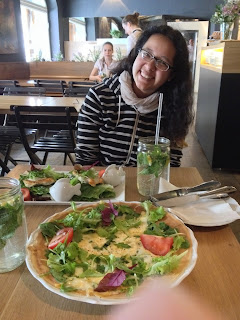 And I couldn't pass up the desserts.  I had the fresh plum torte with the thickest hot chocolate ever made. 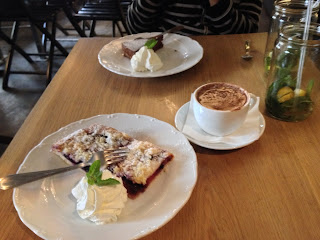 Afterwards, we headed across town to this fantastic museum.  The first paintings, dark, nineteenth-century neo-realist works, were rather dull and was nervous that I had made a mistake, but then the good stuff showed up.

There was the work of the very early pioneer of abstract art:  Frantisek Kupka: 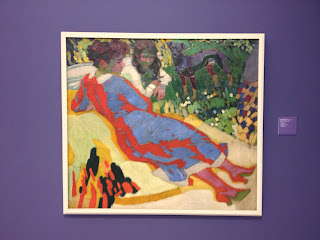 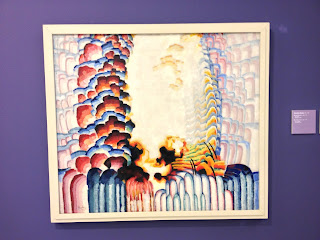 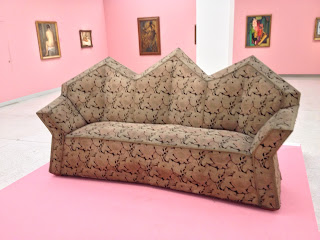 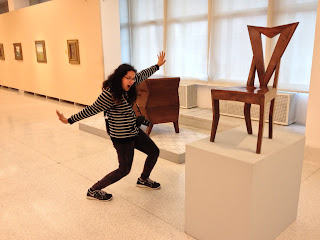 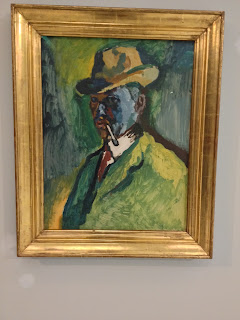 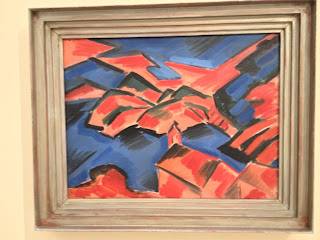 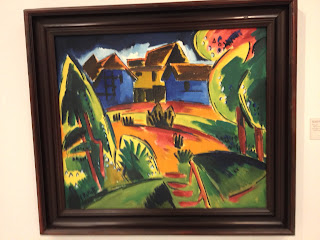 They also had a painting by some guy called Van Gogh: 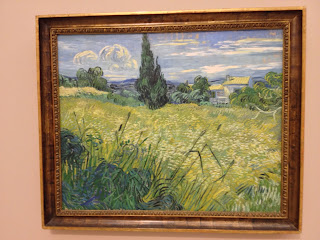 There is a rather dark streak flowing through a lot of modern Czech art.  I called this painting "Where's Waldo?" 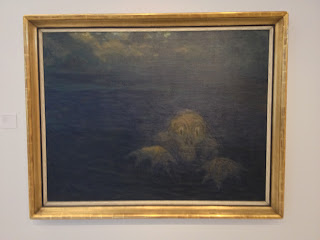 This painting was called "St. Anne," but it reads more like a mother complaining to God for having given birth to a vicious, evil daughter. 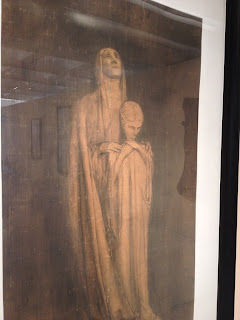 After that we made a quick visit to the Museum of Communism, which is one of my favorite museums in the world.  I find it very tongue in cheek. 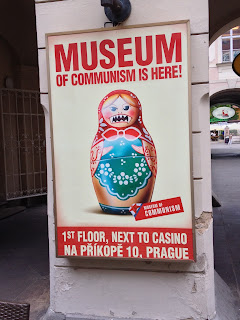 Among their exhibits was the work of this leading artist of communist Czechoslovakia, working in the celebrated (and infamous) socialist realist style: 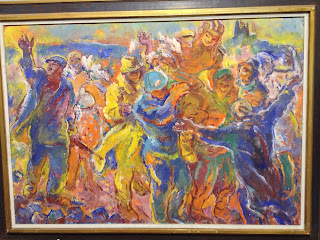 That was pretty much it for the day.  Now to breakfast and off to Vienna this morning.
Posted by J.B. at 10:27 PM