"The Size of a Buick"

I woke up last night around 3:30 and when I went into the bathroom, I thought I saw something move out of the corner of my eye. I assumed it was a “floater,” but when it moved again, I realized it was not some disturbance in my eyeball, but a djook (cockroach) THE SIZE OF A BUICK. It was three inches long, light brown, and had wings (I watched it fly short distances).

At first, I thought I would just ignore it and it might go away on its own, but I decided that I couldn’t bear the thought of it crawling on me, so I got up and decided to kill it. But how, given its ENORMOUS size? I took the damp towel I used in wringing out my laundry earlier and threw it over the djook (which is what everyone is calls them, though I understand, the word is Polish in origin), and then I stomped on it. This actually took several attempts, because its strong exoskeleton protects it from minor stomps. First I winged it, and then I took it out. After that, I scooped it up and flushed it down the toilet.

Unfortunately, I really had trouble falling back asleep after all that excitement. I tried to do my best impression of a sleeping person, but by 5 am, I surrendered to the inevitable and got up. I used the extra time to catalog my photocopies on the computer.

After breakfast, I went back to the Israeli State Archives one last time. I wanted to photocopy the file that I had photographed, just to have a second back up, but they had sent it back. I went through the remaining material pretty quickly, and by 10:30, I decided to head up to the library on .

This involves taking the 4A bus, which I had forgotten how much I dislike. Oh, the bus is fine; it’s clean and air conditioned, but once it crosses Jaffa Road and begins to make its way through what amounts to a series of ultra-orthodox slums, the ride becomes more uncomfortable. After 45 minutes, I reached the campus, just in time for lunch in the cafeteria, which really hasn’t changed at all in 13 years.

It turns out that most of what I need is in the main library on the Givat Ram campus, so thankfully I won’t have to do that ride again. But the trip wasn’t in vain. It turns out that they have some of the lesser history textbooks from the 1950s in the Education Library. I asked directions from the reference librarian and she laughed and said “it’s at the end of the world.” Turns out its as far as you can get in the main, long building, before you enter the .

[Though it does have a nice view of the .] 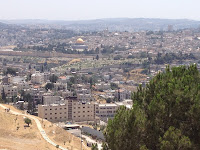 I found some of the books I need, though not the most important ones, and went to look for the photocopy machines. There are three, one on each floor, but one ran out of paper on the third page. Unlike at the State Archives, you don’t have to buy a copy card; their machines accept credit cards (though at the same low price of 35 agarot a copy). Around 3 pm, I decided to head back.

The ride back was like the ride there, but in reverse. The bus starts out only with passengers from the university, but just after passing French Hill begins to get packed with ultra orthodox, including at least one person who actually was crazy. He looked like Rasputin, but wore a long-sleeve sweater. He seemed to be having a very animated conversation with himself, but thankfully, his words remained unspoken in his head. When he got off, I noticed he pulled his sleeves down so his hands didn’t touch anything.

Around , the ultra-orthodox leave, and the bus patrons become more middle class, modern orthodox, or tourists, and it’s a pretty secular group by the time I got off in Emek Refaim. I grabbed a large kafe hafukh and croissant at Aroma and read the paper, before heading off to the Cinemateque to watch The Best Exotic Marigold Hotel. I wasn’t the youngest person in the audience; I think several patrons brought their adult grandchildren, but sometimes it felt like it.

I enjoyed the film and afterwards I walked back through Emek Refaim to get a late dinner. I love the view from right above the Cinemateque: 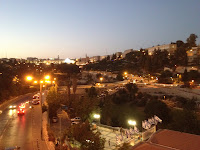 Silwan and the Jordan Valley at dusk: 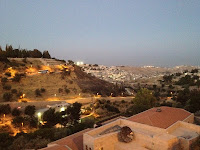 On the way back I noticed this sign at the very beginning of the German Colony. It appears squatters are using an abandoned building for random parties: 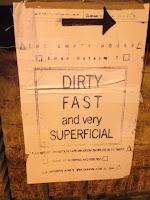 Emek Refaim is really is my favorite neighborhood in . For example, it has two of these: 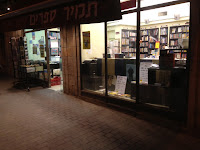 They are called “bookstores.” It also has little markets: 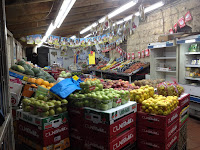 And lots of cafes. 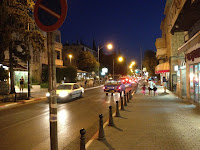 Tonight, most people were watching the France-England soccer match of the European Games. 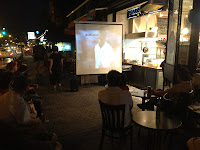 I stopped by the falafel place on Rachel Imenu to get a falafel with everything: 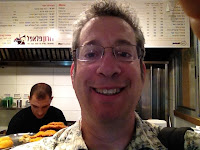 And watch the end of the game. The elderly gentleman sitting with me was rooting for the French. He claimed to be French, but I think he meant Algerian or Moroccan. He didn’t hear very well, so we couldn’t really talk. In any case, although the game was a tie, it seemed to me the French played better..