I learned a new Hebrew word today: sherav. It means “heat wave.” Israeli tv and newspapers are describing it that way. This is some of the hottest weather of the year. I think it definitely affected my brain yesterday, and I think my blog entry probably reflected that. I woke up this morning with a headache, either from mild dehydration or from sleeping under the air conditioner, probably a bit of both.

Because of the heat, I didn’t want to walk far for dinner, so I just went down the hill a bit to Baka and ate again at the Grand Café. I ordered the “open mushroom lasagna” and it was quite good. I wasn’t sure what “open lasagna” meant, but in this case, it was as if instead of stacking the layers, they set them side by side on an oval casserole and then put it under the broiler. It was very good.

Even though it was only a five-block walk back to the hotel, I was sweating pretty heavily. I drank some water (though apparently not enough) and tried to stay up to watch the soccer match. It was vs , and when scored in the first 11 minutes, I figured I’d seen enough and fell asleep. Apparently, I missed quite a game, and scored two goals and won.

Since I hat a lot to do today, I got up early and came down a little after 7. Breakfast isn’t until 7:30, and it’s generally pretty quiet. It gives me time to check my email. Today, however, the place was packed. Not only that, but today we had all sorts of new and interesting breakfast items I’d never seen in my two and a half weeks here: mini croissants, danishes, three different quiches. Ma nishtana haboker hazeh…? I’m not sure who the group was, but they got quite a spread. I’m hoping there’ll be something similar tomorrow.

It was already in the 80s F when I caught the bus to the Central Bus Station at 8 am. From there, it was just across the street to the Central Zionist Archives.

This is one of the nicest places for researchers to work in : clean, large, air conditioned, and quiet. I ordered my files and instead of photocopying what I needed, they encouraged me to photograph them with my digital camera. I had to keep track, however, of how many photos I took, as I would have to pay them 40 agurot a photo. I took 71 photos, but for simplicity, we rounded it down to 70. 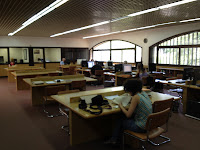 After a very successful trip to the CZA, I caught the bus to Tel-Aviv, where it was somewhat cooler. Even though it was only a 15 minute walk, I took a bus to the Tel-Aviv Public Library. As it was noon, I decided to get lunch right next door at the Heder Ohel restaurant, my parents, aunt, and I ate at last year.

I ordered a lafa with chicken shwarma, which came with arugala, onions, tomatoes, and potatoes, as well as a nice side salad. 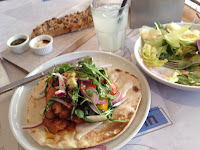 After that, I walked to the library, where it turned out the copies they had were the same one I had already seen in Jerusalem. I give up. I’m beginning to wonder if this book even exists. I’m going to have to write to Dan Porat when I back in the States and ask him where he found his copy.

By the time I left it was starting to get hot in Tel-Aviv, so back on the bus for the short trip to the station, and then on a nice, air conditioned bus to . Everything was going great until we approached the ascent into the hills; then all traffic came to a halt. Our driver decided to take a short cut, so off the freeway we went in the direction of Bet Shemesh. But instead of taking that route, which climbs to via Ein Kerem, he made a u-turn and went back to the freeway. It turns out he was just trying to bypass a portion of the jam (maybe 4-5 kilometers).

We spent the next half an hour creeping slowly up the road. In the past, these sorts of jams are caused by one of two things: 1) car breakdowns from the heat; or 2) protesters closing the entrance to . Thankfully, it was only the first option, as two cars had either both broken down in the no pass area, blocking the road or had gotten into an accident in the same space. Once we passed them, the road opened up.

It was still like a furnace in , so I took a bus to Emek Refaim and camped out for an hour in my favorite coffee shop. Eventually, though, I still had to walk up the hill to the hotel. Even in cooler temperatures, and sticking to the shade whenever possible, I again was soaked by the time I got to the hotel. I drank several cups of water, changed my shirt, and waited half an hour before heading out for dinner.

I just couldn’t face heading down that hill again, even if only to Baka, so I decided to try the hamburger place two blocks away. Called “Daisy,” and at the corner where you turn off to the Haas Promenade, it was probably the best hamburger I’ve ever had in . Unfortunately, this is a very low standard to reach. They still put too much salt in the meat, but other than that it was pretty good. The fries, which were nice and crispy, were actually excellent.

On the way back, I stopped at the makolet (a kind of mom and pop store) to pick up a candy bar. Unfortunately, the woman in front of me was doing what looked like her weekly shopping: 5 kilo of pears, 4 bags of pretzels, 6 liters of milk, etc. As I waited, I watched a rather unkempt older gentleman walk in with a two liter bottle of soda and stand in between me and the woman who being run up. He had money in his hand, and I just knew he was going to try to pull the “I just want to pay for this one item” routine, so knowing the first rule of shopping in Israel, never show any mercy, I walked and stood directly in front him, blocking him from approaching the register. At that point he turned and walked to the end of the line.

With my research basically complete, I have the opportunity to attend the 8th International Conference on Holocaust Education, being held this week at Yad Vashem. I had no idea it was happening now, but by a happy coincidence I’m here. The only problem is that I’m on the opposite side of from the conference, so I have to leave here rather early to get to it on time (it’s about an hour commute from here to there).

I only have two dilemmas. First, tomorrow night’s speaker is the famed Holocaust historian Yehuda Bauer, who will be speaking from 6 to 7 pm. The problem is that I had intended to see the new Israeli film All Happy Mornings, produced by Ofer’s friend Arik. I had spoken to Arik about the film and I think he’s going to be at the screening tomorrow, so I guess I will have to hear Yehuda Bauer some other time.

The other problem is that I still need to go to the Israeli State Archives one last time to photocopy the questionnaire and report that will be the basis of the article I will write this summer. This is really just back up in case I lose my camera with the copy I photographed. That means I have to skip the beginning of the conference on Thursday, but I think it’s better to be safe than sorry.