The heatwave eased up a bit today; instead of a high of 36 C (98 F), it was only 33 C (or 91 F). We got the mini croissants again this morning, but they tasted a bit stale, as if they were leftovers from yesterday. I ate quickly and caught the 8 am bus. 1 hour and a transfer later, I reached Yad Vashem.

No problem getting my badge or finding a seat. The conference tent was fully air conditioned, so it was pleasant inside. 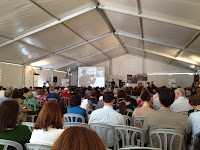 Since I had only heard about this conference two days ago, I was sort of unclear on what its purpose is, but that’s now come into focus. This isn’t the sort of conference where scholars present papers about new research to other scholars; instead, it’s about training educators from around the world about how to teach the Holocaust. In that sense, it’s a much larger version of the five-day workshop we’ve created in .

After an opening talk by Michael Marrus about how we can’t expect to learn “lessons” from the past, since most of these so-called “lessons” are just believes people bring with them to the subject. Instead, he told us, we must try to listen to what the past is telling us.

I chose to go to hear Dinah Porath on Antisemitism and Nazi Racial Ideology. 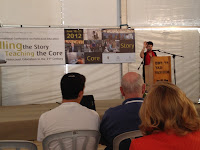 I took a lot of notes, but instead of summarizing them here, I’m just to going to jot down a few things that stayed with me since this morning.

First, was her argument that Nazism was a kind of religion. That the oath Germans swore to Hitler, bound them before God. That while there was a political meaning to the term “Third Reich,” there was also a religious one: each “Reich” represents a covenant between man and God. The first was the covenant with the Jews; the second with the Christians, and the third with the Nazis.

She also emphasized how much Nazi ideology was premised on the fundamental inequality of man. Since Jews were seen as the promoters of the ideal of equality, they were seen as a major threat. This resonated particularly with me, since my soon-to-be-retired colleague in Psychology, repeated blames Jews in his writing for promoting the ideal of human equality and driving advocates of racial inequality, like himself, out of the scientific arena. She quoted from the book Conversations With Hitler, in which the author asked Hitler if he really believed in the Protocols of the Elders of Zion, since it was a notorious forgery. “Even if it were fiction,” Hitler replied, “there would still be truth in it.” My colleague has posted statements recently on the internet that come quite close to this position.

They say there is no such thing as a free lunch, but there was for me today. I sat with some educators from , , and , hearing about their programs. Then I went to the library to find some additional material for my article on children and the Holocaust.

This also was the first of the smaller workshops that I went to after lunch, in which Shulamit Imber discussed how to use diary entries written by children before and during the Holocaust to teach the subject in schools. I jotted down a few ideas for next semester.

There were fifteen of these small workshops in the first session, and fifteen more in the second. I chose to go to the Allies and the Holocaust, but it really was just a general overview of the subject. I jotted down a few things new to me, but I didn’t really take away all that much from the presentation.

I skipped Yehuda Bauer’s talk to race to the Jerusalem Cinemateque to see a new Israeli film produced by a friend of a friend. I hadn’t read the blurb all that closely, so I didn’t realize that it was a documentary, not a feature film. Furthermore, the director and his girlfriend and their relationship was the subject of the film. What that meant was lots and lots of close up shots of people talking into hand-held cameras. The bane of my movie going existence. I started feeling nauseous after the first half hour. Luckily, the film was only 60 minutes long.

Because I was already in the German Colony, I stopped by Caffit, where my parents, aunt, and I had lunch last year. I sat at the bar and ordered relatively bland food to calm my stomach. Then I headed back to the hotel. Even though it’s the coolest it’s been in over a week, I had to change my clothes when I got back to the hotel. I really don’t like coming to in the summer. Fall, winter, spring, are all lovely seasons, but summer is just too hot for me.