There's a famous hasidic song, "Lach Yerushalayim," meaning rejoice in Jerusalem. But with a slight modification, "lach" becomes "lachut," meaning "humidity." For nine months of the year, Tel-Aviv is gan Eden (that is, paradise), but for the three months of summer it is Geihinnom (or hell). Well, summer is here.

I left Jerusalem Friday morning. The hotel said it was unable to refund the final day (I left a day early), but instead is giving me "credit" of one free night for a future stay. I'm not happy about this, but what I can I do? Took the bus to the central station, and then the express to Tel-Aviv, reaching Ofer's apartment just before noon. I went down to the bookstore cafe beneath his building called Tola'at Sefer (Book Worm) and had a fabulous open faced "toast" with onions, tomatoes, and squash, all on crunchy bread. 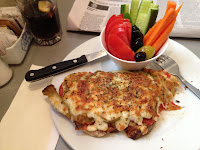 I took Ofer out to dinner Friday night at Brasserie (across the square from his place) to thank him for his hospitality. We both ordered the sole meuniere, which was excellent. 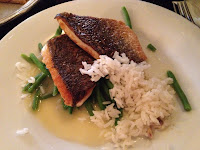 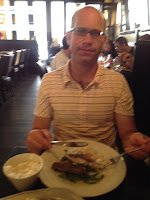 For dessert, we split the crepes suzette, which was also very good. 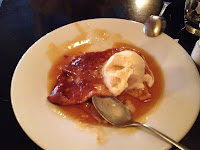 Then, we walked back and met with a friend of his and a visiting Turkish professor she knows, who had been speaking about Antisemitism in Turkey. We had a long conversation about politics, etc., all over some good cheese and fruit, and a very nice Riesling.

By 11:30 pm, the temperture had fallen to about 25 C (or high 70s F), but with the humidity and the lack of a breeze, I was dripping with sweat. I took a shower to cool off before going to bed, but it really only helped as long as I was in the shower. Even with the fan above the bed, I had a lot of trouble sleeping. It reminded me of the first time I came to Israel and stayed with my grandfather in Holon. I had never experienced such humidity before.

I really couldn't sleep in because of the heat, and I decided to go see a film since the theater would be air conditioned. The nearest interesting film was The Door, a new English-language film by Hungarian director Istvan Szabo (who made Sunshine and many other films). It starred Helen Mirren, who was excellent, but I felt the film really missed the mark. It isn't just that he doesn't, in my opinion, know how to end his films, it was that important "reveals" were treated casually, while the big "reveal" of what was behind "the door" was more of a "meh." I also don't like his habit (in this and Sunshine) of showing scenes in which important historical documents and photographs are burned. I suppose it's just the historian in me.

I tried to say in air conditioned places as long as I could, but by 3 pm, I was back in Ofer's apartment. I showered again to cool off, but just sitting indoors was leaving me covered in sweat, so I thought I might be cooler off outside. I went for a long walk and then showered again. For dinner, Ofer and I went across the street to Gusto, an Italian place with what Ofer thought was the second-best pizza in Tel-Aviv (the best is kosher and wasn't going to open before 9 pm). The pizza was actually excellent; the best I've had in Israel. 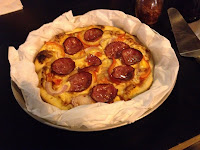 My flight out of Israel leaves at 5:10 am, so I arranged for a taxi to pick me up at 1 am. I could have waiting an hour, but I figured I'd rather be waiting in an air conditioned all than in a hot, humid apartment. Also, Ofer's wifi causes my computer to crash, which is why I'm posting this update today.

I have about an hour before my flight boards, so I logged onto the wifi system at Ben Gurion and uploaded my revised papers to the "cloud," so if I lose my computer before I get home, the most recent version will be waiting for me. I still have about 100 shekels in bills, so I'm going to buy some more euros while I still can.
Posted by J.B. at 5:11 PM