My hotel is located in such a quiet, residential neighborhood, that I’ve tried going without using ear plugs at night. Unfortunately, I’m woken up by the birds at 6 am, so I’m going to have to continue to use them.

I found the archives Hebrew-English dictionary today, so I finally was able to confirm the meaning of such words as “director-general,” “deputy director,” “bureau,” “circular” (as in a memo, not the shape), and “post-primary schools.” I ordered another set of files, but due to a typo, they won’t be delivered until Sunday (the archives are closed tomorrow). I’ve been going through the material pretty fast, and I think I may be finished with this archive by Monday, at the earliest.

That will still leave me a lot still to do, though. I need to spend at least a day or two in the library of the , looking at school textbooks from the 1950s and 1960s. Then, I’ll need to go to the Givat Ram campus, to look for some additional material there. Then, I’ll probably need at least half a week now, at Yad Vashem. If I still have time after that, I may need to check out the holdings in Yad Ben Zvi.

Since I finished a little early today, I took the #7 bus from near the hotel to downtown . I wanted to check out the office of the Society for the Protection of Nature in to find out when their free walking tours are. They're located in an old Ottoman-era building off a beautiful courtyard garden opposite the Russian Compound: 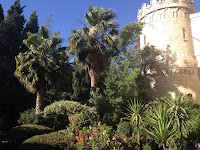 After that, I wandered down , now totally free of cars due to the light rail system. The last time I saw without cars was on Yom Kippur.

There were a few protesters and what looked like a film crew on a shoe-string budget. I thought they were protesting the latest controversy over an illegal settlement, but it turns out they objected to the light rail system. 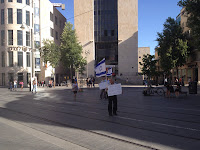 I made my back to the hotel, via the Baka neighborhood. This is a similar sort of construction as the German and Greek colonies, though a little quieter. I decided to come back and eat dinner on Derekh Beit Lehem. I’ve been very frugal all week (today’s lunch of four borekas, a soda, a small coffee, and a small danish came to about $10), so I decided to treat myself to dinner in a restaurant.

I chose the modestly named “Grand Café,” and I decided to order the special: fish kebobs on a spicy herbal cream sauce with tomato salad. I expected whole chunks of fish, but of course in the , “kebob” means minced, then grilled. It was quite tasty, if somewhat unexpected.

Instead of having dessert, I wanted to finally try the “Waffle Bar” (conveniently, one was located across the street). I decided to go simple and get a belgian waffle with vanilla sauce and hot chocolate. I didn’t realize it also came with a scoop of vanilla ice cream and an even larger scoop of whipped cream.

The Belgian waffle was the size of two, and I do really believe that these were meant to be shared; it’s too much for one person to eat. The edges of the waffle were covered in a vanilla sauce that tasted like crème anglais, but had the consistency of whipped cream. In the middle was a sea of hot, dark chocolate sauce. It was definitely overkill. I undid all the good work of this week’s exercise. At least I managed to burn off a few of the calories on the 15 minute walk back (up hill) to the hotel. That was on top of the 3 hours of walking I had done earlier, so maybe I broke even.

Since I can’t work tomorrow, I’m heading down to Tel-Aviv in the morning for the annual Pride parade. Ofer has graciously offered to put me up in his guest room, so I don’t have to take a sherut back to Jerusalem tomorrow evening (after all the buses shut down for Shabbat). I’m leaving my computer in the hotel, so no blog updates until I get back Saturday night.

According to the weather reports, the temperature in will be going up tomorrow. It should remain hot (in the 90s F) all next week. Yuck. Oddly enough, it’s supposed to be (slightly) cooler in Tel-Aviv.