No cell phone calls to wake me up last night and I slept to the amazingly late (for me) hour of 7:20 am. Since the archives are closed today, I had a leisurely breakfast and then a conversation with the manager about rebating me one night if I leave early next Friday. This, she tells me, may be a problem since I paid by credit card and they don’t want to have to cancel the entire sale in order to rebook me for one less night. We’re going to discuss the issue again on Sunday.

I got to the museum about 15 minutes before it opened, which gave me time to browse the gift shop. Then it was off to the antiquities wing. It turns out you can take pictures as long as you don’t use a flash, so I took plenty with my iPhone.

Here are the clay coffins from the chalcolithic period (5000 or so, BCE): 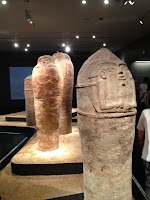 This stone marker (called a stele), is one of the most famous inscriptions ever found. It’s from the 9th century, and the highlighted text (in white) reads “DVD TYB.” Remember, that in Hebrew you read from right to left. 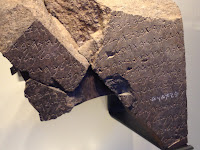 Translated into English, it means “House of David.” It’s the earliest extrabiblical reference to the Davidic dynasty and some grad students were joking about how this find has driven the few remaining Biblical minimalist mad; they insist it’s a forgery.

I rested after I finished the wing with an early lunch. Then I headed off to the art wing. The has one of the largest collections of Pisarros in the world, in part because since Pisarro was Jewish, people keep donating his stuff to them. I think they would prefer to receive some Degas or Renoir, instead.

They have a nice modern section. One of my favorite was this piece by André Derain, one of the founders of the Fauve movement. 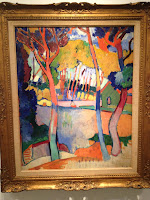 I’m still trying to get the hang of taking pictures of myself. I realize I look a little goofy, but I was concentrating on getting the paintings in the background in focus and my face properly lit in low light. 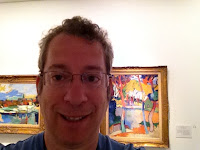 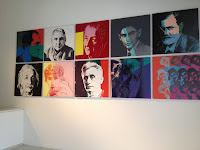 On the way out I stopped in the gift shop. Throughout they have been having book sales as part of the annual nation-wide book festival. I saw a book on the Jews of India in the “3 for 100 shekels” section and asked how much it was on its own: 143 shekels. I ended up buying two of them and the German-language exhibit book for the “Joy of Color Exhibit” I loved so much in 1999 (normally priced at 250 shekels), all for 100 shekels. I saved something like $125 on the purchase, while only paying $25. What a deal! Of course, the heaviness of these three books doubles my suitcase’s weight.

I had almost as good luck when the bus arrived just after I got to the stop, so I didn’t have to wait long in the 30+ heat. I stopped for coffee and a pastry at Aroma and then began the slow, hot slog up the hill to the hotel. By the time (only 20 minutes later) that I reached the comfort of my 23 degree, air conditioned room, my shirt was soaked. I washed and drank lots of water.

It really was too hot to go out, so I used the time to finish cataloging the material I copied from the archive, so I’m really now set for next week’s final push. It’s hard to believe that I’m two-thirds of the way through the research portion of my trip.