I’m going to start off with two stories that should have made it into yesterday’s post. The first involves the Chilean diplomat, Ofer and I had dinner with Friday night. He mentioned that one of his prior postings was , so on a whim I asked him if he’d ever gone to Brasserie George, one of my parents’ favorite restaurants in . “Oh, Brasserie George!” he exclaimed and turned to his partner and said he Spanish, “he knows about Brasserie George.” He told me they ate there once a week. “Why only once a week,” I asked. “Because there are many other excellent restaurants in we wanted to try,” he answered.

The other story involves taking the bus to the sherut Saturday morning. There’s been a lot of stories in the papers here about migrants from , South Sudan, and in . Two weeks ago there were anti-migrant riots in South Tel-Aviv and there was an arson attack last week on the apartment of several migrant families here in . Lots of xenophobia and racism on display. When I was here in ’98-’99, the area around Tel-Aviv’s old central bus station was basically a seedy hangout for Russians and Thais, now I could see it was predominantly east African. I got the last seat on the sherut, and I would say that a third of the passengers were east African migrants. I can also migrants here in , but they aren’t as prominent here as in Tel-Aviv.

Now for today’s news. I discovered a few more changes in yesterday afternoon. After an hour-long nap, I decided to get a cup of coffee to tide me over until after Shabbat ends. I went to Aroma only to find them shuttered. Yes, Aroma has gone kosher. No more coffee on Saturday afternoons, the way I used to enjoy when I lived here in ’98-’99. Everything was shuttered. Emek Refaim has become more religious.

That left me a bit puzzled what to do. As we approach the summer solstice, we are now at the longest days of the year. What that means is that Shabbat doesn’t end until about 8:45 pm. Since I hadn’t thought I was going to have to do more walking in the heat, I didn’t have my water with me, so I went to one of the gas stations (most stay open now on Shabbat) and bought half a liter. Then I started walking. I didn’t find an open place until I reached . I ended up having an early (for ) dinner at Shanty around 7:15 pm. They had the soccer game on, so I watched while enjoying an excellent salad and then the entrecote with garlic, along with a glass of red wine (and a glass of water). 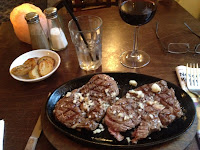 Afterwards, I walked down Nahalat Binyamin, where I found one other open café and ordered a large coffee and watched the end of the game (big upset, beat the ). I chatted with two Germans, one of whom was studying at the , and then I went to buy Friday’s paper and see if Babette’s Feast (Hagigat shel Babette) was open. By then it was 9 pm and all the kosher restaurants were opening. “Just 10 more minutes,” they told me.

[The inside of Babette's Feast]: 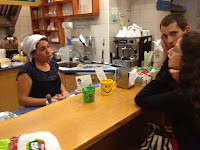 When they opened, I ordered a waffle. What do you want on it, they asked me. Just whipped cream, I said. It was half the price of Waffle Bar, but only 10% smaller in size. 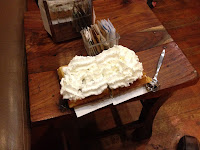 After I finished it, I decided instead of walking to take a bus home. This is when my real trek began.

I went to the bus stop, but wasn’t sure if the #7 bus runs Saturday night. I saw a #22 bus coming and checked the sign for its destination: Talpiot! Where my hotel is. I decided to take it. I figure, even if it didn’t drop me off right in front, at least it could get me 90% of the way. This was a mistake.

My first misgivings were when the bus turned right to go through Rehavia. I reminded myself that the bus I used to take to the Givat Ram campus took the same circuitous route and still ended up in Emek Refaim. Except this bus never seemed to turn east the way I thought it should to get to Talpiot. I wondered if I was going to end of at the Talpiot Mall (which would be about a five-minute walk from the State Archives where I’m working, and then another twenty-minute walk home. But no, it never got near there. We were passing signs to places I’d never heard of before and I began to wonder if this bus’ final stop would be (or Har Homa, which is close enough).

Finally, the bus stopped at what looks like a place where they store and repair old buses. I asked the driver where Talpiot was. He said this is Talpiot. I asked how to get to Baka or industrial Talpiot, but he didn’t know. I asked the only other passenger, but he didn’t know either. He suggested I try the gas station. There I found a police jeep, but the driver was apparently new to and didn’t recognize any of the areas in southern I named, including the German Colony. I then asked a taxi driver busy repairing his vehicle. After I said “Emek Refaim?” he replied “on foot???? Wow, that’s a long way away. Well, walk down to the traffic light, turn right, and then ask someone else.”

Refusing to despair, reminding myself that Jerusalem is actually a rather small, compact city that can be crossed on foot from one end to the other in about an hour and a half (and prepared, if necessary, to take a taxi), I started down the hill. At the traffic light I felt like it seemed familiar. I hadn’t seen any of these building before, but I had a kind of feeling that I was nearing familiar territory. To the right and up the short hill I went. There, I turned left and saw it: not any building I could recognize at night, but a traffic circle with metal statues that I knew! I had reached the industrial section of Talpiot (I was seeing all the buildings from the side I had never been on before). Just 3 minutes later, I was at the skewers place I like to eat, and 15 minute after that I walked, exhausted, sweaty, and looking like a drowned rat, through the door of my hotel. I drank lots of water, took a shower, washed my shirts, and went to bed.

The funny thing is that if I had waited for the bus to Emek Refaim, it would still have been a twenty-minute walk to my hotel (as opposed to the thirty-minute walk from where the #22 dropped me off).

I slept a little restlessly, but didn’t wake up until nearly 8 am, about an hour later than I usually do. I went to the archives where I saw Dan Porat as soon as I came in. I thanked him for the advice he gave me last week, and I mentioned some of what helped me from the articles to which he had referred me. I asked him if he knew anything about the survey document that I had found, and unfortunately, he knows about it. In fact, he’s made reference to it in an article. Disappointing, I know, but then I had expected someone had written on it. The good news, I now know where to look to see what’s been written and I hope there’s still room for me to add my own research. This is pretty common in history; there aren’t a lot of new things out there that no one has ever seen before. I’m still quite optimistic that I’ll be able to get at least one article out of this.

In fact, I've just read his article now, and while he does mention this survey, he only has a single paragraph on it, where he notes that only a third of the schools responded, and a quarter of them said that they did nothing to commemorate the observance. There's a lot more I can do with it than that.
The first file I went through today was on Yad Vashem, and included a lot of the internal discussions in the Ministry of Education on how to establish it. I made a lot of copies. The copy machine is working fine today (though the other one is still broken); my problem is now with the card dispensing machine. In order to make copies (35 agarot a page), you need to insert a copy card into the machine. When you use up all the money on the card, you need to add more. Today, the card dispenser decided it no longer wants to accept 5 or 10 shekel coins, just 1 shekel coins.

By the time I reached the ministry file on Holocaust remembrance day, I decided just to photograph each page (it will also cut down on the amount of paper I have to carry home). I made it 90% of the way through that file before the archives closed at 4 pm. I’m hoping to finish my main research at this archives tomorrow. Then I will probably head up to to check out some of the articles Israelis have written on ministry policy regarding Holocaust education in Israeli schools.

I walked to Emek Refaim, had a coffee at Aroma, and caught up on the news. Then I went back to the hotel to drop off my stuff and find out more about the bus service to and Yad Vashem. There isn’t a direct bus to either from the hotel, so I will have to change once each way (though to Yad Vashem, I’ll change to the light rail line).