I´m using an internet cafe in Barcelona, now that my laptop has decided to check out of this trip. I´m hoping the university computer tech people can fix it when I get back. In the meantime, I´m using an internet cafe and downloading my iPhone photos to upload them here.
The flight from Ben Gurion was beyond awful. Instead of flying Iberia, we ended up on their brand new, even crappier discount air service: Vuoling. To save money, not only do they not offer any complimentary meals, they don´t even offer complimentary snacks. When I went in the back, I saw they had poured some glasses of water, which were free, but only if you happened to go to the back of the plane. Even worse, they apparently feel that as long as they keep the cabin temps just below 80, they don´t need to be any cooler. Despite all that (and three people behind me who held a loud conversation while the rest of the plane tried to sleep), I managed to get nearly 2 hours of sleep.
I took the express bus from the airport to downtown Barcelona and then checked in my luggage. I love the beautiful buildings 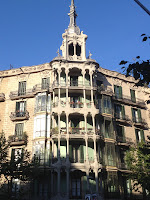 The tree-lined streets (this is La Rambla): 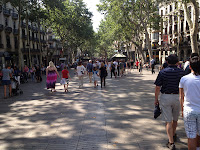 I put my luggage in storage and stopped at a Tapas bar for lunch. This is Qu Qu: 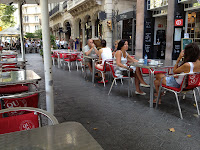 Afterwards, I walked to the apartment building where my parents had rented a place for the week, and waited for them to arrive. My niece and nephew were completely surprised.
After we settled in, we walked to a restaurant my mother liked on her last visit, but it turns out they aren´t open on Sunday evening. Instead we went to Divinus (next to Qu Qu). My father and I had the cod, which was excellent. 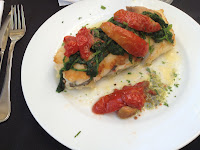 My mother had the chicken and veal paella, which she loved: 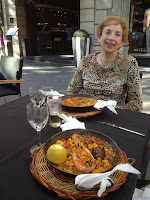 Both my niece and nephew had the seafood paella: 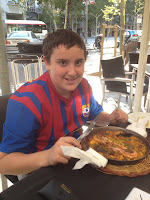 This morning, I got up and shopped in the market near our apartment for some rolls, butter, jam, and watermelon: 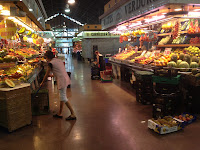 After breakfast, we walked down La Rambla and stopped in the big market: 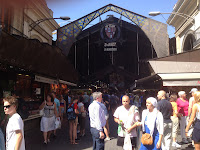 They sell all sorts of stuff here: 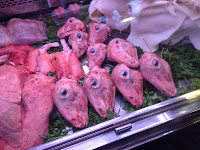 My niece and nephew: 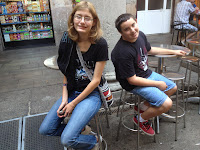 In the old part of Barcelona, we stopped to see the Temple of Augustus 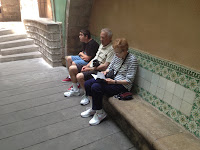 Shayna was sitting off to the side: 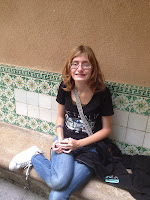 A street in the oldest part of the city: 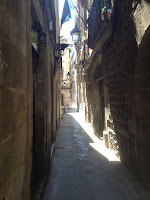