My sleep cycle, on the other hand, is still out of whack.  I went to bed before 11 last night, but woke up at midnight and then at 1 am, both times with racing thoughts. The temperature in the room kept fluctuating between too hot and too cold.  I took an Ambien and slept until 7:30. A good eight hours, but chemically assisted.

Plenty of time to enjoy breakfast today, a mix of salad caprese, toasts, and cereal, along with a café au lait and juice. 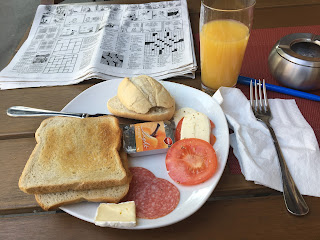 Then it was off to the Bundesarchive, located on a former U.S. military base in the southwest of the city.  I brought the researcher card they gave me two years ago and everything went well until I got to the front door of the reading room.  I could read that the door was automatic, but I couldn’t see a button.  Eventually a staffer took pity on me and opened the door.  She apologized for its problems and showed me where the unmarked button was.

It turns out that my email to them never made it to the researcher’s desk, so with some difficulty I explained what I was looking for and they ordered the material so it will arrive tomorrow.  After I left, I realized I should have checked on some other people involved in the film, but I can do that tomorrow and order the material, if any for Thursday.  In the meantime, the film archive has confirmed that they have the material I requested and I can see it on Friday.

Ultimately, the visit to the Bundesarchive is more just dotting the “I”s and crossing the “t”s.  I want to make sure I’ve quoted everything accurately and make photocopies this time of the most important documents, since my handwriting leaves something to be desired.

The weather so far has been on the unpleasant side: warm, very humid, and overflowing with pollen.  In other words, not all that different from Washington, D.C. in June.  Everyone on the subway or bus or street has that damp sheen of sweat, and long hair is wet and frizzy.  It wasn’t just me, I could see people fanning themselves or sopping up sweat as they stood on the platform or sat in the subway car.  By noon, the sky had begun to cloud over and at 1 pm, it broke.

I had gone back to the hotel to drop off the metro passes I bought for the students when I heard a peal of thunder and heard a massive down pouring of rain.  I thought I might try for the S-Bahn, but didn’t get three feet before I ran for cover.  There was a lot of lightening and the rain was coming down in sheets.  I waited in the doorway of the pension for it to ease up.  After about 10 minutes, I figured it was safe to head to the station and had no problems.

There, I could see hordes of very damp school children who had been caught in a class outing; all were soaked through, as were their teachers.  The good news, though, is that both the temperature and the humidity were way down. 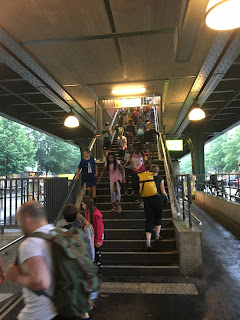 I decided now was as good a time as any to get a coffee, so I took the S-Bahn to Unter den Linden and walked to Café Einstein, a very good Viennese style Kaffeehaus.  I already knew I was going to get a café au lait, which comes with separate pitchers of hot coffee and steamed milk, but I asked if I could check out the pastry case.  In the end I settled for a slice of Johannisbeertorte (red currents with streusel on top of marzipan filling and a pastry dough crust).  It was very good.  Red currents have a flavor that most closely resembles cranberries, though not quite as sour. 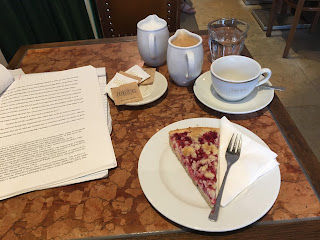 After enjoying my coffee and torte and editing my article for an hour, I headed over the German Historical Museum.  I’d never gone through their entire permanent collection exhibit before.  To be honest, I really hadn’t missed all that much.

The post-World War I era is far more interesting, with a very good display of Nazi and communist propaganda posters.  Their section on the Nazi era, however, could have expanded the coverage of the Nazi culture and home front, but perhaps that’s just because that’s the topic of my current research. 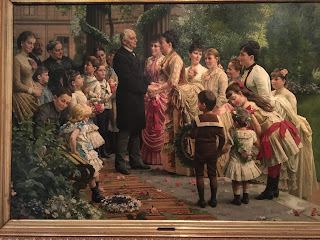