Back in the Capital of the Free World

I had very low expectations for sleep last night.  Even though I had had very little, I often find it difficult to sleep when the time difference is so great.  This one is 9 hours.  I took a Benadryl and got into bed a little before 10 pm.

My sleep was fitful.  I woke up at 11 and then at 12, and finally at 2 am.  I’ve been getting over a cold and the congestion makes sleep difficult. I started thinking about this wonderful drug I could take when I was younger.  It was a very small red pill, the smallest pill I had ever seen and the first one I could successfully swallow.  It was called Pseudophedrine (marketed under the brand name Sudafed) and did a terrific job of drying up my sinuses (though I couldn’t take it before bed as it made me jumpy).  I used to wonder how people got through colds before it.  Now I know.

Several years ago, I went to the store to buy some and the new stuff didn’t work very well.  I compared labels and discovered that the new “Sudafed” didn’t actually contain pseudophedrine.  I went to the pharmacy and they explained that if I wanted the real stuff, they needed to check my driver’s license and record my purchase.  Eventually, I just gave up taking the stuff and learned to suffer through the congestion.

These were the thoughts going through my head at 2 am.  I also felt very warm in the room and opened a window.  About ten minutes later, two American women, in their 20s by the sound of their voices came home.  I think they’re staying in a neighboring pension that shares the same courtyard; their voices came from aways and above.  Even with my ear plugs in I could tell at least one of them was drunk.  Eventually, I took my earplugs out to figure out if she was crying or laughing.  It turned out to be both. I decided I’d rather be warm and quiet, than cool and noisy.

I took an Ambien to help me fall back asleep and for a while, I didn’t think it was working.  I put on my eye mask to block out morning light and tried and tried to fall asleep.  Next thing I knew I heard someone faintly knocking.  I figured it must be one of the neighboring rooms, but I glanced at my watch.  It was 10 am!  I had slept nearly eight hours after taking the Ambien and nearly twelve hours total.  Typically, Ambien knocks me out for only four hours.  This is probably the most I’ve slept in a night, ever.

I threw on my clothing and rushed to the lobby to ask if I as too late for breakfast.  Nearly all the tables were put away, as was all the food, but the clerk pointed out the one remaining place setting and said it was for me.  She brought me bread, butter, cheese, cold cuts, juice, and coffee, while I read the internet.  Seems that Berlin has now become the capital of the free world.

After showering, I was ready to start the day, albeit rather late.  I started off at the drug store, where I got some cough drops and tissues, and the International New York Times.  Then it was off to Film Universität Potsdam to see what material they might have on Bruno Balz (none, it turned out), and the 1942 film, Die große Liebe (press clippings).   As I sat on the S-Bahn, I couldn’t help but notice how fit everyone was.  People walk or bike or take the subway everywhere.  It keeps you in shape.  I was also struck, as I always am, by the social intergration in Berlin.  I don’t just mean people of different races or ethnicities, but the way you can have the elderly and children, college students and parents with infants, all sharing the same subway car or sidewalk.  In America, we keep all those people in their own neighborhoods and communities, and you rarely see them together.

After Wannsee, we passed a section of garden plots.  These are for people who live in apartments in the city who want to grow fruits and vegetables. They often come with little tiny garden homes for them to sleep.  I first saw them in 2006 and I so wanted one.  I realized that I do have one: it’s my backyard garden.  Right now my fig tree is full of green, unripe figs; the pomegranate is full of red flowers; my apple tree is flowering late; and my lemon tree is full.  I squeezed and froze ten cups of lemon juice before I left town.

My final addition are a group of tomato plants I grew from seed.  I read about this scientist in Florida who has figured out how to have tomato plants whose tomatoes actually taste like tomatoes.  For a $10 donation, he’ll send you some seeds. I bought them in February, but they took a while to arrive (not ‘til the end of March).  I planted all of them and five beefsteak and six cherry tomatoes sprouted and survived to be transplanted.  I kept two beefsteak tomatoes for myself and gave the rest away.  No one was interested in the cherries, so I ended up planning four of them. I’m hoping that at least one of my beefsteak tomatoes survives my trip so I can harvest one for its seeds. 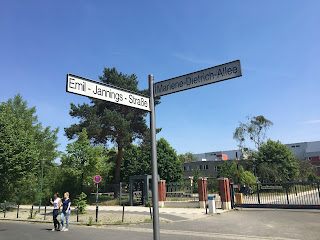 The film university is located on the corner of Marlene Dietrich Allee and Emil Jannings Street (two huge stars of Weimar German movies). 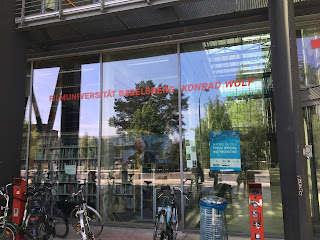 My visit to the film university’s library went well, and I received even better news when I checked my email:  the film archive has agreed to let me come on Friday to see what they have about Die große Liebe.  With such good news, I decided to celebrate.  I headed up to West Berlin and went to KaDeWe, to the most expensive cafeteria in Germany, to check out their pastry display: 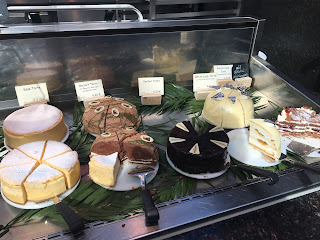 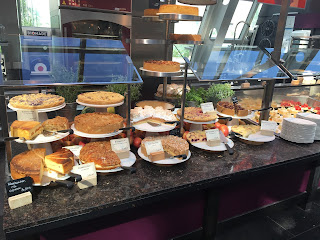 In the end, I chose the Baiser Kuchen mit Rhabarb, Erdbeeren, und Marzipan (in the second photo, look for the one right in the middle).  For those of you who don’t speak German, that means a pie, filled with a layer of marzipan, strawberry filling with rhubarb, and topped with meringue.  Technically, no whipped cream, so I’m breaking my diet by not having a whipped cream dessert today, but I think this counts.  It was very good.  Not too sweet, either. 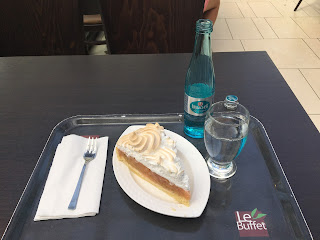 I didn’t head directly home, but rather to Unter den Linden in order to check out what is showing this week at the Komische Oper and the Staatsoper.  Turns out I’m going to be hearing a lot of Berlioz.  On Thursday, I see The Damnation of Faust and on Friday, it’s Carmen.

The students arrive on Saturday, and my plan is to take them to I Due Forni, a pizzeria, in Prenzlauer Berg.  I wanted to check it out again and photograph the menu.  I got my usual:  the Diavolo Pizza (without olives) and a “kleine Bier.”  Heinrich Heine quipped in the early 19th century that the Jewish contribution to German politics was the “kleine Bier” (a “little” beer). 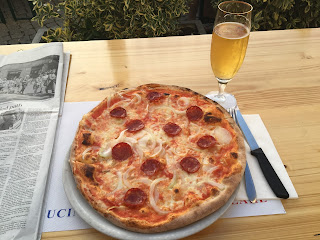 Tomorrow I go to the Bundesarchive in Lichterfeld, so I’ll be back on the S1 towards Wannsee.  I will actually set an alarm (only for 9 am) in case I oversleep again.  If I finish early, I’ll visit the German Historical Museum on Unter den Linden, since I’ve never been through the entire core exhibition.
Posted by J.B. at 12:41 PM