My second night was only slightly more restful than my first:  I did manage to have some dreams, but they were work anxiety nightmares.  This was a new one though.  My typical work anxiety dream is that I'm a student, it's the last week of the semester, and I've just realized I was enrolled in a class that I forgot to attend.  I've had papers due for weeks, which I haven't done and I can't find the syllabus.  This dream was different.  This time I dreamt that I was a professor who had forgotten to teach a class and hadn't shown up for a week.  I woke up wondering if I had given all the finals I was supposed to (I had).

After breakfast, I met up with one of my students and we headed down to Potsdam.  I heard about her adventures the day before, wandering around the neighborhood.  At one point she got lost (well, at more than one point), and she used the mnemonic device I had told her ("Orange Burger Street") to find our hostel (Oranienburger Straße).

We took the bus to Friedrich the Great's summer home away from home:  Schloß Sans Souci (Sans Souci Palace). 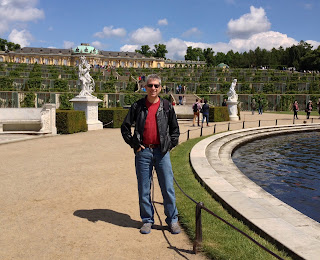 After buying timed tickets to tour the main quarters, we wandered around the gardens.  There were a few nice bits of Eighteenth-Century orientalism: 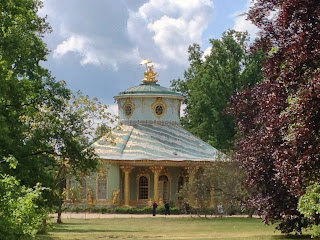 This is the Chinesisches Teehaus.  After all the drought we have suffered in Southern California, it was nice to luxuriate in a garden that has plenty of water. 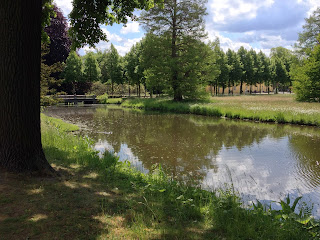 While King Friedrich grew lots of fresh fruit, we didn't see any orchards, but lots of spring flowers: 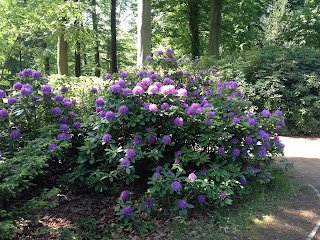 There's no tour guide for the palace.  Rather, they give you a headset in the language of your choice and you go through with everyone in your time slot.  You can take photos, but only if you buy a special permit.  Guards in every room keep an eagle eye out for tourists sneaking shots.  My student took some surreptitiously, but I was too concerned about getting caught.  The palace is much, much smaller than similar places like Warsaw Castle or Wilanow Palace in Warsaw, or the grand daddy of them all:  Versailles.  Still, it was a lot of fun.  Two things were very clear from the tour:  Friedrich had major issues with his father and absolutely no affection for the wife his father made him marry.

Afterwards, I thought we might stop at the film museum in Potsdam, but our bus didn't stop there.  Instead, we headed to west Berlin so I could pick up some Neuhaus chocolate at KaDeWe.  In addition to the radically different feel west Berlin has from the east, today there was a new element:  all the crowds of Dortmund fans in Berlin for the final of the German soccer cup. 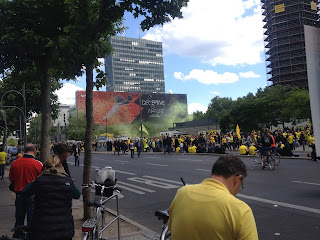 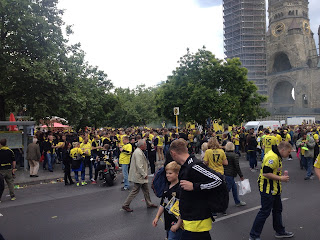 There were a fair amount of police out, but no one was getting out of control and everyone seemed to be having a good time.  Dortmund fans were everywhere in Berlin.  For every thousand Dortmund fans, I think I saw one Wolfburg fan.  Not sure where they were hiding.  Unfortunately, though, Dortmund lost the game last night:  1:3.

It's always fun to wander around KaDeWe (Kaufhaus des Westens - the largest department store in Europe).  In the food courts on the 6th floor, they have display cases for gourmet delicacies from various countries.  Here's one of my students in the American section. 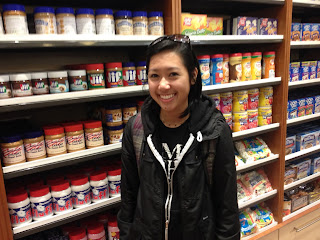 We had a little bit of drizzle on the walk back from the subway to the hostel, but not bad considering it had been threatening to rain on and off all day.

Unlike west Berlin, there's tons of art on the walls of buildings in the east.  For example, there was a famous squatter art studio just up the street from the hostel called Kunsthaus Tacheles.  Opened a few months after the fall of the wall, it flourished until 2012, when it was shut down so the space could be developed.  Fenced off, it still remains vacant, though some of the wall murals remain: 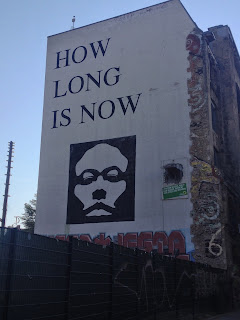 It may be hard to make out, but that's a giant cockroach emerging from the wall, right of the face.  Beneath it is a green sign (by the Green Party) that says:  "Before the Wall, after the Wall, the state harasses the bugs."

After walking around to find the nearest ATM machine and laundromat (for the students), I made my way to Prenzlauer Berg to have dinner in one of my favorite restaurants:  Gugelhof.   This restaurant specializes in Alsatian food, and I decided to start off my meal with something I ordered two years ago:  the duck liver paté prepared like crème brûlée, with onion marmalade: 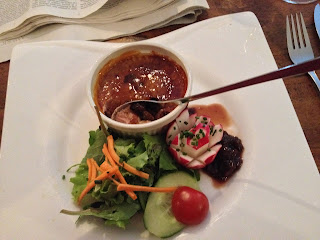 I went somewhat lighter for the main course.  I ordered the Beelitz asparagus (a white asparagus, particularly loved in Germany), with hollandaise sauce and roasted potatoes.  Most people order it with either ham or schnitzel, but I had had schnitzel for lunch and wanted to go lighter. 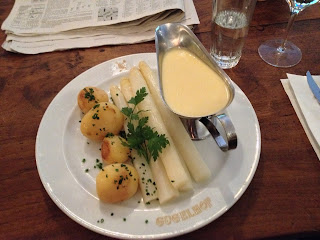 I had a glass of Weißburgunder (known elsewhere as pinot blanc) to wash it down.  Smooth, fruity, with no trace of oak, it was perfect. 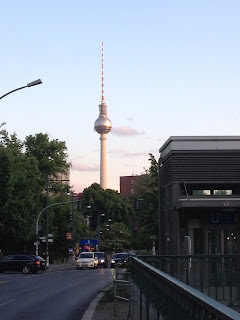 Back at the hostel, I watched the last 30 minutes of the soccer match.  There was a family watching nearby, and the little boy (perhaps 6) was wearing a yellow Dortmund jersey.  Every time the Wolfburg goalie blocked a shot, he stomped around and kicked the sofa in frustration.  Unfortunately, Dortmund lost.