I flew from Los Angeles to Frankfurt on an Airbus 380-800, which has to be one of the largest passenger planes being used now.  They loaded the planes with four rows simultaneously.  Just take Door #1, my line was told (as opposed to the three other gang planks.  They loaded that ship faster than a Carnival Cruise.

Unlike so many domestic carriers, who charge even just to listen to music, Lufthansa had dozens of recent motion pictures to pick from, including Ex Machina, which is still in theaters.  The real surprise came with the cocktail cart:  cocktails, wine, and beer, all complimentary.  In Economy Class!  Then a refill of wine with dinner.  But when they came around afterwards to offer me either cognac or Bailey's over ice that my jaw figuratively hit the ground.

When I saw the one-year old a few rows ahead of me when I boarded I groaned to myself:  no, not screaming baby airlines again. Thankfully, though, the kid was very well behaved (or drugged) and never cried out until the very end of the flight.  Still, I only got 2.5 hours of sleep.  I am so tired right now.

The change of planes in Frankfurt was smooth and efficient.  In Berlin, there was no question of where to find the baggage claim:  each pair of gates has its own.  Within 15 minutes of landing our luggage was popping up.  From there it was a straight shot through customs.  Why can't our country be the same.  I would compare it to a third world country, if that wasn't an insult to third world countries.

A little bit of excitement on the bus ride from Tegel airport.  The driver was trying to shut the doors when a guy ran and forced his way on.  The driver yelled at him; he yelled at the driver.  We sat there for 10 minutes with nothing happening.   Then, the police arrived.  Eventually, the passenger was forced from the bus, and the bus driver drove off (though not before the ejected passenger slapped the side of the bus with his palm. 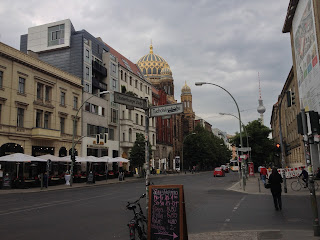 I'm staying again at the Generator Hostel in Mitte.  It's just down the block from the Neue Synagogue on Oranienburger Straße.  I went out for a walk after checking in, but it started to drizzle.  I ended up getting a cafe latte and chatting with a couple of Israelis staying here. 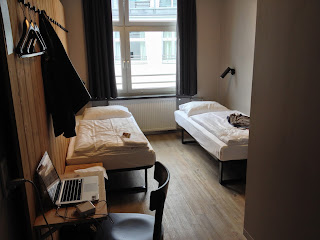 My room is a lot like the one I had last time:  two twin beds, lots of plain pine furnishings, clean and sparse.   I'd write more, but I really need to get some sleep.  I'll fill in more details tomorrow.
Posted by J.B. at 2:05 PM