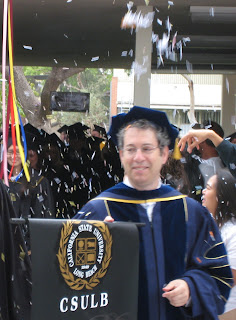 [This picture was taken during commencment when we graduated our first major (it was just e-mailed to me).]

[This is an amazing piece in the Gruenes Gewoelbe (the Green Vault) that recreates the birthday of the moghul emperor.]


I was pretty tired yesterday afternoon, so I went to a brew-pub restaurant (I think it was called Watzke) in the Neustadt area, not too far from my hotel. I ordered the sauerbraten and a small beer. Too late, I remembered that I wanted to lose weight on this trip and drinking beer is no way to do that. On the other hand, I'm remembering that in Central Europe, beer is always the most affordable thing on the menu.

The sauerbraten was OK (my mom's is better), the potato dumpling mostly inedible, the red cabbage tasty, and the beer was pretty good. The weather started to look threatening (it had rained earlier in the afternooon) so I paid my bill and started to walk back. I was two and a half blocks away when it started to rain. I thought the weather had cleared up so I had left my umbrella in the room. No real damage done, thankfully, and it gave me a chance to work off some of my dinner by running out of the rain.

I stayed at the ANA Hotel because the hotel I stayed in last year had no availability. This one was a little cheaper and felt it. The bed was pretty saggy and I ended up sleeping on the edge against the wall, since no one normally slept there and the bed still had some support there. That being said, I slept about 9 hours last night, so it couldn't have been that bad.

Breakfast at the hotel was passable, nothing too exciting, and after checking out, I headed to the Gruenes Gewoelbe. The museum didn't open until 10am, but I was told to be there by 9 if I wanted to get tickets to the Historic section. There was already a long line, but I stood, and stood, and stood. The only excitement was the older German gentleman who arrived about 30 seconds after me and kept trying to nudge ahead of me in queue. I've shopped too many times at Eilat Market, however, to be caught off guard by a beginner, and I slowly maneuvered my body so as to force him to step back and recognize my priority.

After about an hour and a half of waiting I finally got in, only to find the that all the morning tickets had been sold and that they only had afternoon times still available. At that point, I had no choice but to go to only the New section. Even if I hurried through, I would barely make the later (2:46 pm) train to Prague. Besides, after standing for an hour and a half, I just couldn't face waiting all that extra time, so I limited myself to the New section.

Not that it felt like a compromise. The stuff they have there is stunning. It includes the world's largest green diamond, a mechanical clock of gilded silver and precious stones, which marks the seconds by descending ball of rock crystal, an ornate (and never used) coffee service of silver, gold, and crystal, and an incredibly detailed scale reproduction of the birthday celebration of the moghul emperor, complete with elephants and camels, all made out of gold, silver, and precious stones (it took eight years to complete).

Then I went back to the hotel (having done something I didn't do last year -- which was to master the Dresden tram system) and to the station where I took the train to Prague.

Last time I was in high summer; now it is late spring. The fields which were then brown are still green and the city, though slightly humid, is still comfortable. I had no trouble finding my hotel and I even remembered exactly how to turn out of the metro station. I noticed yesterday that this feels more like an extension of my last trip than a different one, and it's hard to imagine a whole year has passed since I was here last time.

Well, I'm off to the Cubist museum and then the Museum of Communism.
Posted by J.B. at 7:18 AM

commenting mainly so you'll know you have readers.

i like this picture more than the other you'd posted. despite its blurriness, it's a more natural 'you' expression. cuter, too.

your line about the uncomfortable bed reminded me of something particular i'd heard before. uncharacteristically, i soon remembered what it was (though it has nothing to do with either dresden or prague or uncomfortable hotel beds):
in an early scene in "kiss me kate", fred and lili are engaged in some one-upmanship interchanges. fred smugly mentions his hamlet (oops! not sure if it was hamlet) in paris, which she reminds him closed in only 3 days, and to which he responds that it was because of a general strike, and to which she says, "oh, it couldn't've been THAT bad!"

i hope mom logs on to see your praise of her sauerbraten.