The Fields and Rivers of Podhale (revised) 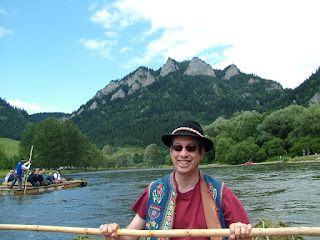 [Me, dressed as a Gorale (highland) peasant, on a raft in the Dunajec River]

(You may notice that the photos from today's entry are all from my camera. However, because the photos are so large it takes too long to load them and I'm afraid it may take too long for you all to download the pages, so I won't be doing this again for a while. However, I am going to upload one last image from yesterday) 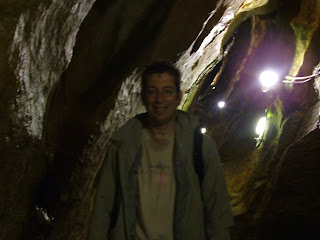 [Me, in the cave, yesterday]

I spent the day today travelling through the region known as Podhale. In Polish, Podhale means "beneath the mountain meadows," and this is the area where my grandmother's family comes from.

I had some doubts last night about the wisdom of taking a rafting trip given the weather, but it turned out great! After a leisurely breakfast I caught the bus at 10 am. We headed north from Zakopane towards Nowy Targ, and then turned east, driving past Lopuszna, the town my great-great-great grandfather lived in. Zakopane is at the base of the Tatra Mountains, which in turn is part of the Carpathians. North of the Tatras are a set of small foothill ranges, such as the Gorce (where my grandmother's family is from), and the Pieniny, where I went rafting today.

Our first stop was a small castle from the 14th century that served as a border outpost for the Kingdom of Hungary for many centuries (this region was the boundary between Hungary and Poland, and now is the border with Slovakia). The castle was a lot of fun, though very small. 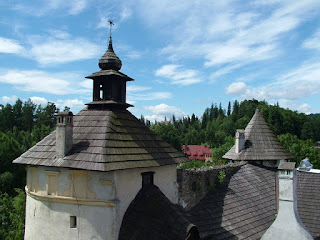 Afterwards, I grabbed a snack at a stand by the entrance. The favorite Polish snack is something called Zapiekanka, which is basically pizza (sort of) on a baguette. Except instead of pizza sauce they squirt a line of ketchup. I think that says all you need to know about Polish food. Oh, and the less said about my dinner last night, the better. It wasn't the worst hamburger I'd ever had, that was the one I got in Katowice last year and threw away after the first bite. This was just not quite that bad.

After that we drove to the put in site for the rafts. It's on the Dunajec River, at the very eastern edge of the Gorce range and the beginning of the Pieniny. 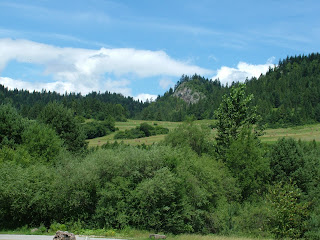 [The hills of the Gorce]

The rafts are very stable, and there's no risk of getting wet. The Dunajec is very calm; at certain points we went through some very slight rapids, more like rocky patches. Other than that, we just glided down the river through steep gorges lined with trees. I was sitting in the front row, and at one point I got the chance to go to the front and have my picture taken. The oarsman loaned me his hat and vest, hence my clothing in the photo at the top.

After two peaceful hours floating on the border between Poland and Slovakia, we finally landed. This was our lunch stop, so I ordered a small beer and kielbasa. It's saying something when I write that this was the best meal I've had in Poland so far (other than the yoghurt and toast with butter and black currant jam I have for breakfast).

Our last stop was Debno to see the beautiful fifteenth-century wooden church. Before the Holocaust there were dozens, if not hundreds, of wooden synagogues throughout Poland and Eastern Europe. Not one survived. It is only in wooden churches, like the one in Debno, that we can get a faint echo of what those synagogues must have been like.

Some tourists on the bus recommended what they claimed was a good restaurant in Zakopane, so I'm going to try it tonight. In the meantime, I'm going to try to take the funicular to the top of the hill overlooking the town to watch the sunset.

Tomorrow, I'm off for Krakow.

As I wrote above, I headed up to Gubalowka to see the sunset. It's remarkable to see how much development there has been in the past year. I shot the photo that I use as the title picture of this blog at a small farm there last year; this year it's been converted into a race track for little motorized four-wheel buggies. But there still are some traces of its rural past. I saw some farmers loading up hay onto a horse-drawn hay cart. I saw a lot of those by the way, today, at least a dozen. This time I got to take a picture of one close up. 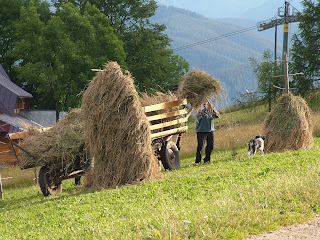 Then I headed back down for dinner. As I mentioned, some people I met on the tour today recommended a place called Chata Zbojnicka. It's a few blocks up from the train station, set back from the street in a grove of trees. The conceit of the restaurant is that you are eating in the secret hideout of the last of the highland zbojniki (bandits).

When I got there around 7:30, just ahead of a small tour bus, the front door was locked. I wasn't sure what to do, so I waited for the group. They knocked, and a minute later we heard "BANG! BANG!" thumps on the door. It was flung open to reveal an older (not quite elderly) woman, wearing traditional mountain attire, and wielding a small axe (which she had just used to knock back the deadbolts). I couldn't understand anything she said (I've been told she wasn't really speaking Polish, but a highland dialect, but I couldn't tell the difference). She motioned the men in first. I hung back to let the bus group in, but no, no, I had to come in with the men, and then the women followed.

BANG! She struck a tin platter on the wall. Everyone sat down at a long table and I asked if I could join them. Sure. I asked if anyone spoke English. No. German? No. Hebrew? No. French? No. Spanish? No. "Just Polish," they said. Great, I thought, this is going to be an odd evening.

When it came time to take the orders, the group (all thirteen of them) ordered the same thing. I motioned to the waitress that I wanted to order separately. I requested the roast goose with potatoes, apples, and cranberries, along with a large beer.

My beer came first, then came their thirteen hot wines. Then my main course came, but their food never did. It turned out that they didn't order any. At one point the woman who ran the place (the one who opened the door) came by looking the part of a highland Ma Barker. She asked me something and then motioned that I should stand up. I had been warned that they cut the underwear off guests (and, of course, I could see the results of past victims on the wall), so I refused. Later, she tried to cut the underwear off one of the men in the bus group, but he managed to get away.

Every now and then, she hit the tin tray, or threw a metal platter to the ground, just to startle the guests.

The goose, by the way, was excellent, and the cranberries made a really nice garnish. I've noticed that my best meals in Poland last year were duck and goose, so maybe I should just stick to that here in the future.

After I finished, two of the bus group ordered ice cream, while the rest just sat there. I never did figure out who they were (2 men, 11 women) beyond that they come from a town near Warsaw. I paid my bill and made my way out with my underwear intact.
Posted by J.B. at 8:00 AM

and you also missed the great Polish tradition of the Atomic Wedgie over coffee!